80% Of The French Think Their Country Is Bankrupt

NOTE: This post originally appeared on TheAutomaticEarth.com on January 30, 2013.

US GDP came out today and it was a stinker: -0.1%. Enter a choir of 10,000 pundits who all figured out that all that bad smell was the result of one thing only: cuts in military spending. That’s the sort of thing that tells me – or more correctly: confirms – that the optimism bias has become so strong and infectious it’s no longer worth even discussing. And that’s before I notice – caveat: I haven’t read all the eerily similar comments – that nobody I read bothers to explain by how much military spending has raised US GDP lately. Or to what degree they hope it’ll go up again. Soon.

So, I then think – I have a hard time focusing when confronted with blinders -, by how much would US GDP have been raised with more military spending? Would it perhaps have reached the same lofty level as French GDP? Here’s a graph: 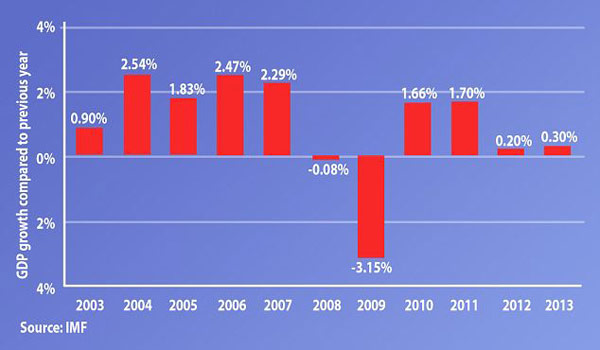 Yes, French GDP rose by 0.3%. Ergo: France is doing better than the US, and quite a bit. Well, you know, assuming that the nouveaux Français theatre de warfare in Mali is not yet included here. Here’s a safe prediction all 10,000 can pen in right now: French GDP will rise significantly next quarter; ain’t nothing like guns and ammo and military funerals to raise the outlook of an economy.

There is just one problem with this seemingly watertight argumentation. That graph comes form a series of articles by the Daily Mail on French…. drumroll….. bankruptcy. Which is translated as “Banqueroute”; they even invented the word, and imported it into Britain right after 1066, we may assume. Now if France is bankrupt with a 0.3% GDP growth, what is the US with 0.1% shrinkage? Could the answer be: looking for a theatre?

Back to France, which, despite those far better GDP numbers, gives the US a run for its money when it comes to make-believe. This week, French labour minister Michel Sapin provided a glimpse behind the Elysee curtain, which of course was promptly denied as soon he spoke out, in these hilariously priceless words by finance minister Pierre Moscovici, as per The Telegraph:

Pierre Moscovici, the finance minister, said the comments by Mr Sapin were “inappropriate”.

Brilliant. Who said the French have no sense of humour? Nonetheless, be that as it may, French news daily Le Figaro did a poll that showed 80.5% of French think their country is indeed broke. And I don’t think all 80.5% were joking. What Sapin said comes down to something like: “There’s a state captain, but not as we know it, not as we know it”. Here’s Tim Shipman’s Daily Mail piece on the issue:

France’s government was plunged into an embarrassing row yesterday after a minister said the country was ‘totally bankrupt’. Employment secretary Michel Sapin said cuts were needed to put the damaged economy back on track. ‘There is a state but it is a totally bankrupt state,’ he said. ‘That is why we had to put a deficit reduction plan in place, and nothing should make us turn away from that objective.’

In a frantic damage limitation exercise yesterday, colleagues in the Socialist administration said he was only highlighting faults of the previous government of Nicolas Sarkozy. Finance minister Pierre Moscovici said: ‘What he meant was that the fiscal situation was worrying.’ But a poll yesterday by Le Figaro newspaper showed eight out of 10 readers agreed that France was indeed bankrupt.

Data from the Bank of France shows capital investment is leaving the country every day. Rating agencies Moody’s and Standard & Poor’s have both already removed France’s once-coveted AAA credit.

[UK] Tory MP Peter Bone said: ‘This is clearly a case of at least one Frenchman speaking the truth. ‘We need to hear more of this kind of honesty from the French. This man deserves promotion.’

While Mr Sapin’s admission was unlikely to have been intentional, it highlighted huge concern at President Francois Hollande’s handling of the economy. Despite all this, Mr Moscovici insisted: ‘France is a truly solvent country, France is truly credible country, France is a country which is starting its recovery.’ Mr Moscovici also insisted that France is in a position to ‘meet its financial obligations, including the payment of its employees, thankfully.’

Yes, Mr Moscovici, I’m sure we can all agree that that France is in a position to ‘meet its financial obligations, including the payment of its employees. However, there may be some disagreement on how long it can do that for. The statement itself is true even if it’s only good for just two weeks or so, though we all know that’s not what you intend people to take home from it. But it doesn’t deny that either.

Me, personally, I find it astonishing how little attention Mr. Sapin’s comments have attracted. I’m one of those rare people who are all for having these discussions out in the open. All of them, those about today’s US GDP embarrassment as well as France’s financial perils. Don’t tell me that you’re “in a position to ‘meet your financial obligations'”, show me how and why. We can’t all go through life shying away from what really should be obvious questions, only to find out later we’ve been had by another bunch of lying and cheating politicians, just like generation upon generation of our ancestors before us. We need to have learned at least something from what they went through.

More from that Daily Mail piece:

Since Mr Hollande came to power, unemployment and the cost of living have continued to spiral, while ‘anti-rich’ measures have provoked entrepreneurs to leave the country. The President is currently trying to revive France’s economic fortunes by cutting spending by the equivalent of more than £51 billion.

The Bank of France has already produced data showing that capital investment is leaving the country every day, along with the business people who helped to build it.

[..] There have even been reports that Nicolas Sarkozy, the last President of France, is preparing to move to London with his third wife, Carla Bruni, to set up an equity fund. Prime Minister David Cameron has already said that Britain will ‘roll out the red carpet’ to attract wealthy French people.

My impression, but that’s just me, is the French are still suckers for authority figures – Charles the Gaulle and Napoleon engraved that into their very foreheads -, but they’ll have to wake up at some point. From the economical fairy tale that says they’re doing fine, and from the grandeur idea they’ve been fed forever now.

As far as President Hollande is concerned, I’m mostly neutral, but if I were to single out on thing he’s done for the biggest fool award, it’s his decision to reverse pension reforms, enabling his voters to retire at 60 or even earlier. While at the same time he’s part of the Troika cabal pressuring Greeks to work longer, and while all his Eurozone neighbours are pushing up retirement age to 67-68 and onwards. That one thing makes me doubt Hollande will sit out his term. You can fool some of the people all of the time and all that, and all of them some of the time.

The French government has ordered shops and offices to turn off their lights at night in a desperate bid to save vital resources as the country struggles to prevent a looming financial crisis. From July 1, all non-residential buildings will have to switch off interior lights one hour after the last worker leaves the premises while all exterior and shop window lighting must be turned off by 1 am. The announcement follows an embarrassing incident for President Francois Hollande yesterday when employment secretary Michel Sapin admitted the country was ‘totally bankrupt’.

The French environment ministry hopes the move will both save energy and reduce light pollution. Local authorities will be able to allow exceptions for Christmas lighting and other local events. The new law will save about two terawatt/hours of electricity a year – the equivalent of the annual consumption of 750,000 households, the ministry said. Environment Minister Delphine Batho said it would also make France a pioneer in Europe in preventing light pollution, which disrupts ecosystems and people’s sleep patterns.

Oh boy, what’s not to love? Save face and change tack with “preventing light pollution”. And to make it better, don’t do it right now, no, wait till July 1. The gift that keeps on giving if ever I saw one. Isn’t Paris known as the City of Lights? Well, those days are gone.

What this tells you is that France has not one, but two problems: finance and energy. And that prior to July 1, we can expect a bunch of real nasty announcements on both. Plus also, that François Hollande is not so sure he’ll last that long. That’s why he’s pushing it forward, hoping for a miracle.

Are things that bad in the US? Who knows, really, given the ever rising extent of opaqueness? Anybody want to bet their children’s lives one way or the other? GDP comes in negative and people fall over themselves to declare that it’s only because military spending fell. So what does that mean? Does it mean the US has to go back to war to raise its GDP? Look for a new off Broadway theatre?

Why is it so hard to call a spade a spade? Because incumbent politicians and wealthy moguls fear that the truth will set them free in a way they don’t like. As in “The Truth Will Set You Free, But Not When You Dunnit.” And so we make do with the few scrappy shrapnel of truth that fall off their tables. Is that really the best we can do?

Something tells me the French will lead the way, farming equipment and all, in front of the crumbling presidential palaces, come July 1 or so. And when the fires rage in Paris, Americans will still be discussing recovery. And if there’s anything “positive” to be said about it, it will be that somehow it has something to do with somebody getting hurt in some new theatre somewhere in the world.