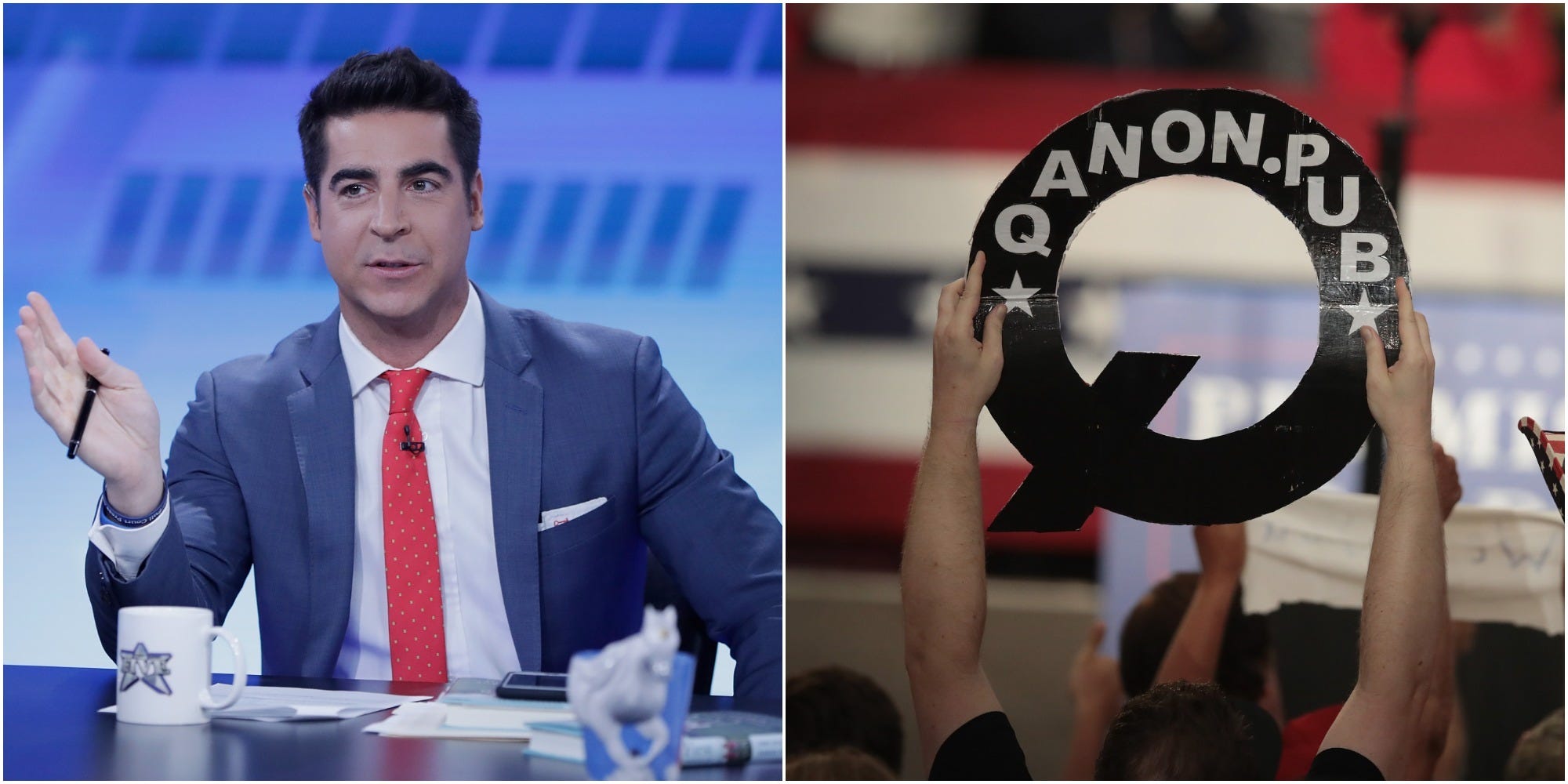 Fox News host Jesse Watters said a set of false, far-right conspiracy theories has “uncovered a lot of great stuff” while he railed against Twitter’s crackdown on thousands of accounts tied to the theory.

Watters was hosting Eric Trump on “Watters’ World” Saturday night when he gushed about the baseless theories that have been tied to violent incidents that contributed to warnings the theories pose a terror threat by the FBI.

The host brushed off “some crazy stuff” that has been tied to the theories, like a fake news story that inspired a man to fire an assault weapon in a Washington, DC pizza shop in the now-infamous Pizzagate hoax and a wave of unfounded theories that home goods retailer Wayfair is involved in child sex trafficking.

“Q can do some crazy stuff, with the pizza stuff, and the Wayfair stuff, but they have also uncovered a lot of great stuff when it comes to Epstein and it comes to the deep state,” Watters said. “I never saw Q as dangerous as antifa.”

Fox News' @JesseBWatters has some high words of praise for QAnon — which has been responsible for two murders, two child abductions, one terrorist incident, one church vandalism, one restaurant arson…etc…. pic.twitter.com/n4MiMahhpi

In a statement provided to Insider on the comment, Watters said he doesn’t “support or believe in” the conspiracy group.

“While discussing the double standard of big tech censorship, I mentioned the conspiracy group QAnon, which I don’t support or believe in,” Watters said in a statement. “My comments should not be mistaken for giving credence to this fringe platform.”

Business Insider previously reported that Twitter announced last week it would be cracking down on “so-called ‘QAnon’ activity,” including accounts that motivate targeted abuse and formerly recommended content related to the theories. A tweet from the platform said the action aimed to cut down on the potential for this content “to lead to offline harm.”

We will permanently suspend accounts Tweeting about these topics that we know are engaged in violations of our multi-account policy, coordinating abuse around individual victims, or are attempting to evade a previous suspension — something we’ve seen more of in recent weeks.

NBC News first reported that around 7,000 accounts were immediately suspended and up to 150,000 were expected to be impacted by the new policy.

Trump likened the move to an attack on the upcoming presidential election, telling Watters the bans were violations of Americans’ “First Amendment right to freedom of speech.”

“You have some little dweeb in Silicon Valley, who’s 22 years old, he’s a tech savant. He’s running Twitter or one of these companies. And he literally has his finger on the power of a presidential election,” Trump said.

The conspiracy movement first appeared in October 2017 on the anonymous 4chan forums, where a post claimed to be published by a government insider named “Q.” Followers of the theories have since aired false claims online that are centered on the belief that President Donald Trump is working to defeat an underground network of elite figures including Democratic Party leaders and the so-called “Deep State” that carry out a cycle of evil acts.

In the years since its appearance, the conspiracy movement has gone mainstream and been amplified by President Donald Trump and some of his allies.

Trump, the president’s second-eldest son and Executive Vice President of the Trump Organisation, used a QAnon hashtag in an Instagram post ahead of a Trump 2020 campaign event last month. The president regularly retweets QAnon supporter accounts.

Watters has regularly aired out QAnon theories on air, recently repeating a baseless theory about George Floyd’s death in police custody on May 25.

Business Insider’s Jake Lahut reported last month that Watters speculated live on an episode of “The Five” that Floyd’s death was “not racially motivated at all,” but “a hit that was executed extremely poorly.” The claim matched up with theories that have been floated among Q supporters.

Despite Watters’ apparent interest in the theories, Fox News wrote last month that QAnon is a “baseless belief” that has gained traction with congressional hopefuls.

A Fox News spokesperson did not immediately return Insider’s request for comment.

What is ‘QAnon’? Understanding the far-right conspiracy movement embraced by Trump supporters that originated on 4chan.

The Trump campaign relies on a huge network of QAnon accounts to spread conspiracy theories and disinformation, data shows