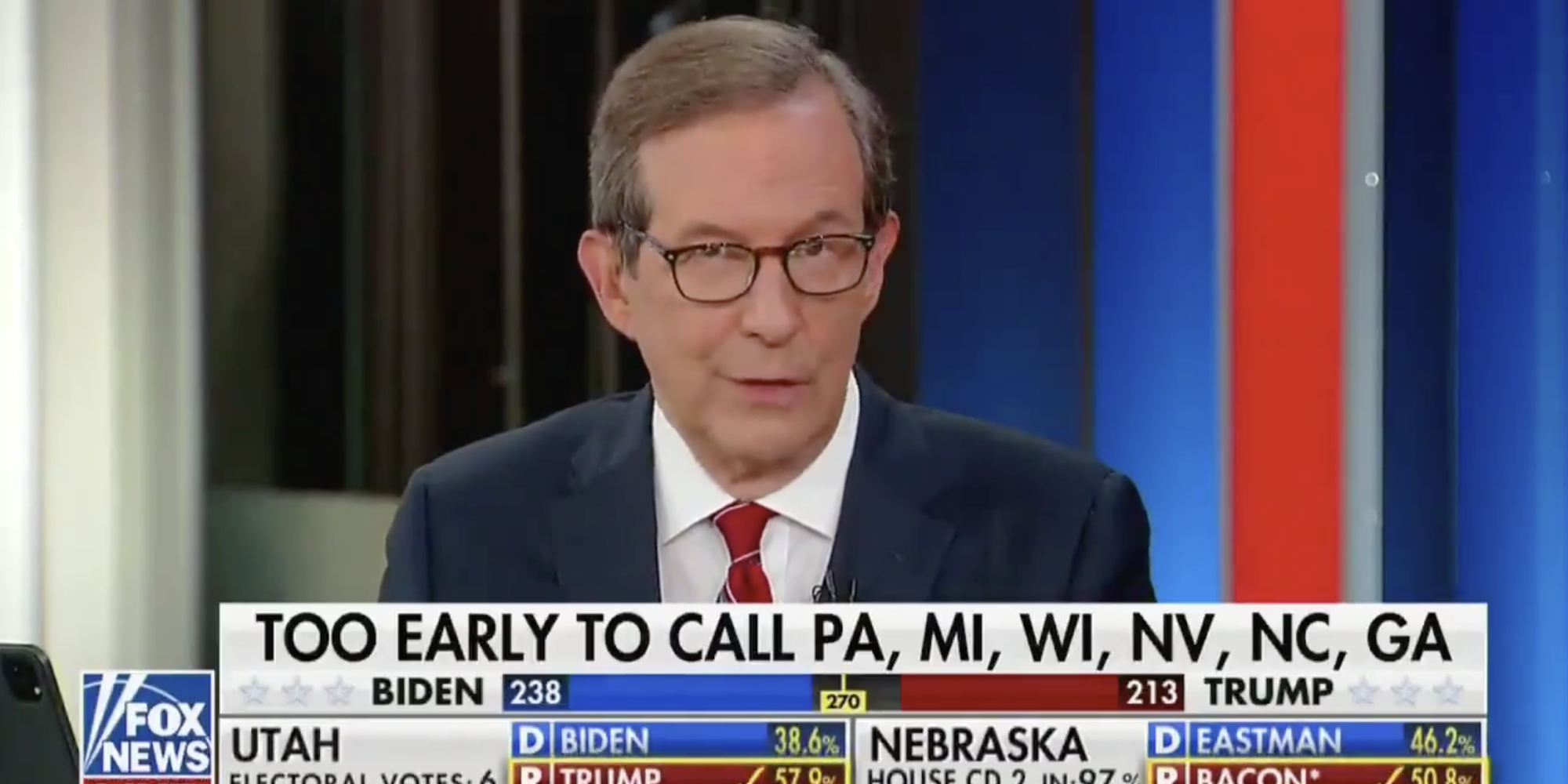 The president said in a speech early Wednesday that “frankly, we did win this election,” despite there having been too few results for either candidate to have won.

He went on to call for “all voting to stop,” saying he would take his case to the Supreme Court.

His claim of victory was premature at minimum â€” no decisive victory had been declared at the time of his speech, and the result was still unknown hours later as several keys states stopped counting ballots overnight. It is unclear why he said he would go to the Supreme Court.

Fox News’ election hosts and commentators expressed concern at the president’s statements and struggled to put them in some kind of context.

Wallace, responding, said: “This is an extremely flammable situation and the president just threw a match into it. He hasn’t won the states, nobody is saying he’s won the states, the states haven’t said that he’s won.”

A chyron saying several states were “too early to call” backed him up. Fox News, which has its own decision desk, had not called either candidate for the presidency.

The network’s decision earlier in the evening to call Arizona for Joe Biden â€” the first major outlet to do so â€” also enraged the Trump campaign.

Though Fox News is well known as Trump’s preferred network, Wallace is not particularly in favour with the Trump administration, having criticised the president several times and been accused of bias by Trump and Donald Trump Jr. after he hosted Trump’s debate with Biden on September 30.

He added that he didn’t know whether the president meant his statements literally but questioned Trump’s call for “all the voting to stop.”

Voting has stopped, but in some states votes postmarked on or before Election Day can still arrive and be counted.

“I don’t know whether he literally means it, but he said, ‘We will be going to the Supreme Court because we want all the voting to stop.’ Well â€” voting to stop, yes, but vote counting?” Wallace asked.

As Wallace pointed out, states are often unable to finish counting votes by the morning after Election Day.

In response to Trump falsely claiming he won the election and explicitly saying he's going to attempt to circumvent the Democratic process via the Supreme Court, Fox News had this to say in his defense: pic.twitter.com/tKkMEjpUZl

She suggested that the president was worried “that all of a sudden you’re going to find a hundred thousand votes that just happen to be in some trash can behind a thing â€” I think that’s what he was talking about.”

It is unclear what Perino meant, but she appeared to be alluding to election fraud. Trump has spread several, widely debunked conspiracy theories about election fraud around mail-in voting and voting in-person more than once.

She suggested that the president had been reflecting on the victories already confirmed for the Republicans on election night but had just taken things too far.

“They have so many things that they can talk about and be proud of tonight,” she said.

“And to say, in a posture of ‘I’m convinced we’re going to win â€” I believe that these races are going to be called for me, and for us, and for our movement, just hang with me for another 24 hours instead’ â€” now what will the headlines all be tomorrow? What will everybody be saying? That he just went a step too far.”