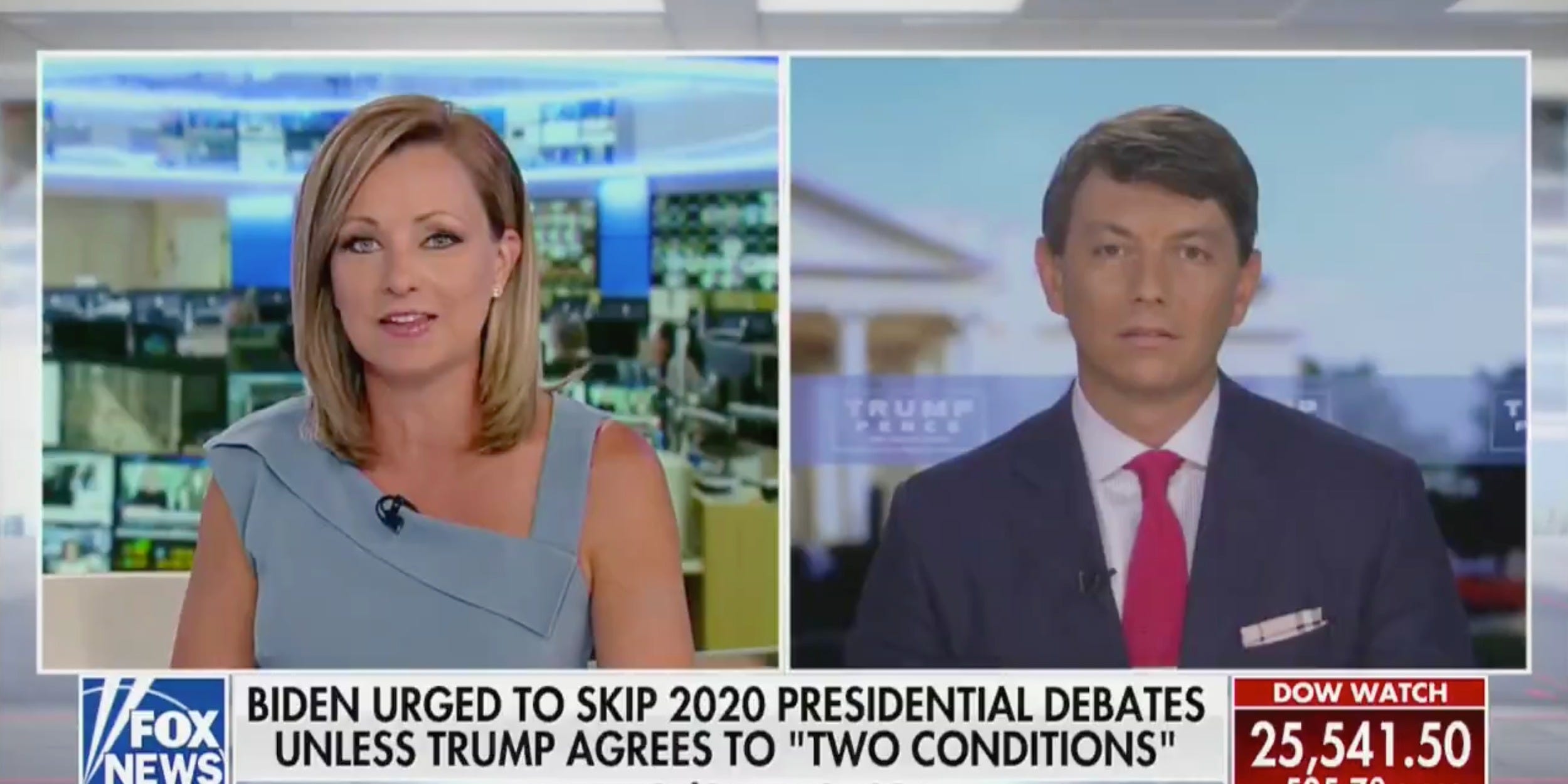 The Fox News host Sandra Smith quickly cut off a Trump campaign spokesman on Thursday after he went on a bizarre tangent about former Vice President Joe Biden’s leg hair.

Smith was asking Hogan Gidley, the Trump campaign’s new national press secretary, about the three debates between President Donald Trump and Biden scheduled for the fall.

Gidley started by saying Biden’s performance in Democratic primaries put him down in the polls until he turned things around in South Carolina in late February.

Then Gidley referred to a clip of Biden talking about his time as a lifeguard at a 2017 event where officials in Wilmington, Delaware, renamed a local pool after him.

Fox anchor Sandra Smith quickly interjects when Trump campaign spox Hogan Gidley goes on a tangent about how Joe Biden will use debates with Trump to talk about "how children love his leg hair" and that he "coaxed children up onto his porch during quarantine" pic.twitter.com/0wUNBgAyLC

“You’re going to hear interesting comments from Joe Biden about how children love his leg hair and how he used to coax children up onto the porch with ice cream during quarantines,” Gidley said.

“Whoa,” Smith interjected, before asking Gidley to get back to what either candidate could gain from the debates.

In the clip, which resurfaced late last year, Biden talked about how kids would come up to him in his lifeguard chair and straighten out his leg hair, describing it as a gimmick they found funny because his blond leg hair stood out since he was one of the only white people at the pool.

As for the ice-cream comment, that came from a CNN interview on March 24 where Biden talked about how he had been quarantining and was unable to be with his grandchildren as usual.

Biden told CNN’s Jake Tapper that his son Beau’s kids “live about a mile as the crow flies from us” and that they would walk over to see their grandparents on the porch.

“Every day they walk over through the woods and through a neighbourhood, and they sit out in the backyard, and we sit out on the porch, and I bribe them with ice cream,” Biden said in the interview.

“Hold on, Hogan,” Smith said on Thursday. “We’re talking about whether or not the president wants to debate Joe Biden and whether or not, inside the Joe Biden camp, they’re urging Joe Biden to debate Donald Trump. Who benefits the most from a debate?”