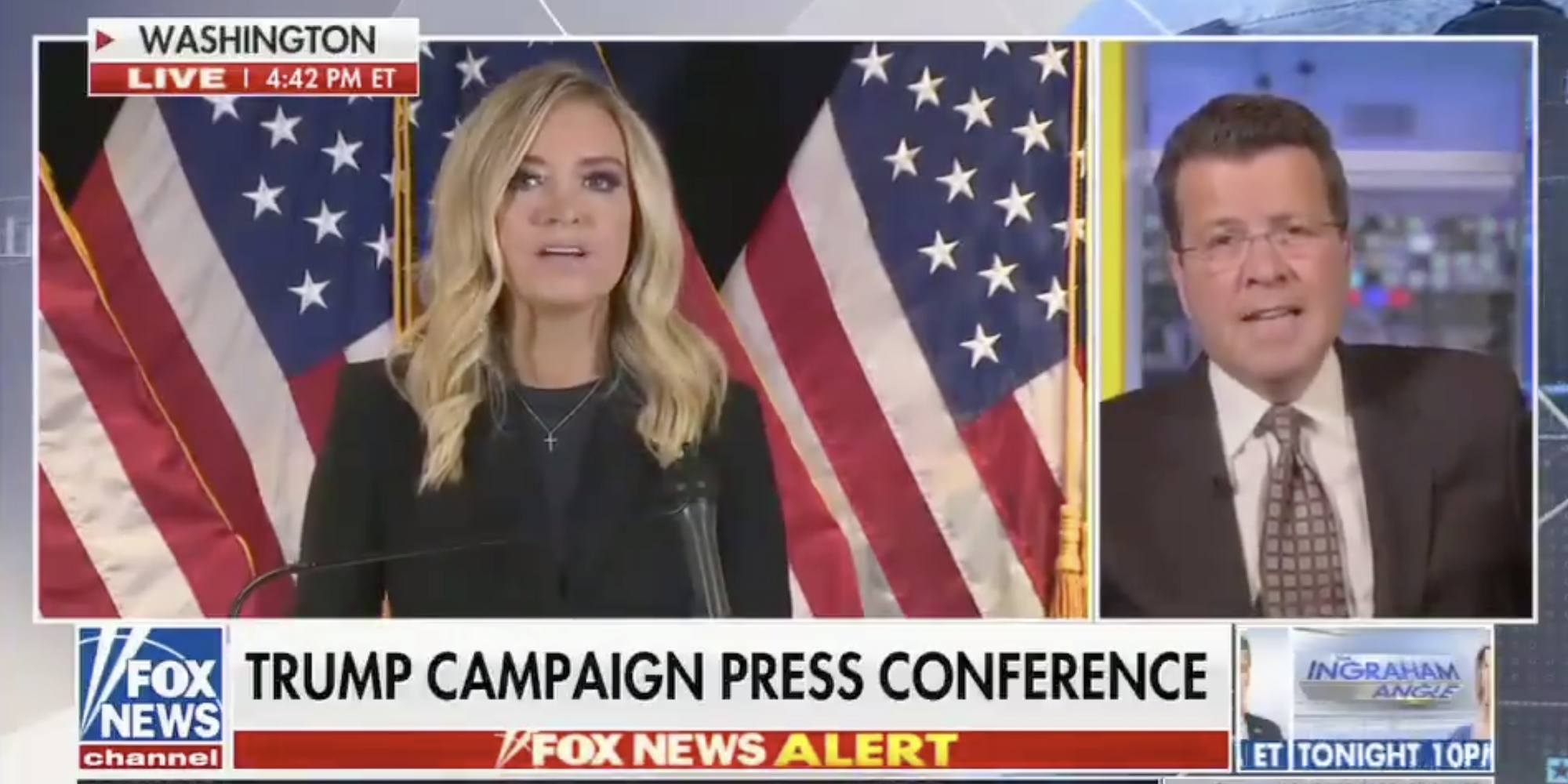 TwitterThe Fox News anchor Neil Cavuto on Monday said ‘not so fast’ as he cut off Kayleigh McEnany’s baseless claims of election fraud.

The Fox News anchor Neil Cavuto on Monday cut away from a press briefing featuring Kayleigh McEnany, who is both the White House press secretary and a Trump campaign spokesperson, as she continued to push the campaign’s baseless claims of election fraud.

“She’s charging the other side as welcoming fraud and illegal voting. Unless she has more details to back that up, I can’t in good countenance continue to show you this,” Cavuto said as he cut off the press conference, pushing back on what he described as “explosive” charges from McEnany.

“Not so fast,” Cavuto added.

McEnany suggested, without evidence, that Democrats welcomed “fraud” and “illegal voting” in the 2020 election.

Fox News cuts out of McEnany

Cavuto: "Whoa, whoa, whoa. I just think we have to be very clear: she's charging the other side as welcoming fraud and illegal voting, unless she has more details to back that up, I can't in good countenance continue to show you this." pic.twitter.com/0koLBJasl9

Though multiple major news outlets, including Fox News, have declared Biden the projected winner of the 2020 election,Trump has refused to concede and is rejecting the results.

Fox News opinion hosts like Sean Hannity and Tucker Carlson have backed Trump on his groundless claim that the election was stolen from him. The Trump campaign has presented no evidence to substantiate allegations of fraud and seen little success in its efforts to present legal challenges to the results of the election. A number of the lawsuits brought by the Trump campaign have already been dismissed because they lacked merit.

Trump has also falsely claimed he won the election. Meanwhile, a number of world leaders have congratulated Biden on his victory, including UK Prime Minister Boris Johnson and Canadian Prime Minister Justin Trudeau.

Some Republicans in Congress have pushed back on Trump’s unsupported claims of fraud and extended their congratulations to Biden.

“I would offer my congratulations to President-elect Biden on his apparent victory â€” he loves this country, and I wish him every success,” GOP Sen. Susan Collins of Maine said in a statement on Monday.

“Presidential transitions are important, and the President-elect and the Vice-President-elect should be given every opportunity to ensure that they are ready to govern on January 20th,” Collins added.

But a number of prominent GOP lawmakers have stood behind the president despite his lack of evidence â€” including Senate Majority Leader Mitch McConnell.


Read more:
How Kimberly Guilfoyle, the ‘human Venus flytrap,’ has groomed boyfriend Don Jr. into a political powerhouse and turned herself into a conservative star

“President Trump is 100% within his rights to look into allegations of irregularities and weigh his legal options,” McConnell said Monday.

There is no evidence of major irregularities or mass voter fraud regarding the 2020 election results.

Though voter fraud is extremely rare in the US, the president for months baselessly claimed that expanded access to mail-in voting amid the COVID-19 pandemic would lead to widespread fraud in the 2020 election. Trump also refused to commit to a peaceful transfer of power before Election Day.

Before the end of voting on November 3, the president repeatedly signalled he would claim the election was “rigged” against him if he lost, but there is no evidence to substantiate such claims.