Apple just removed 'Fortnite' from the App Store, and the company behind the game hit back with a scathing video that roasts the iPhone maker's most iconic ad 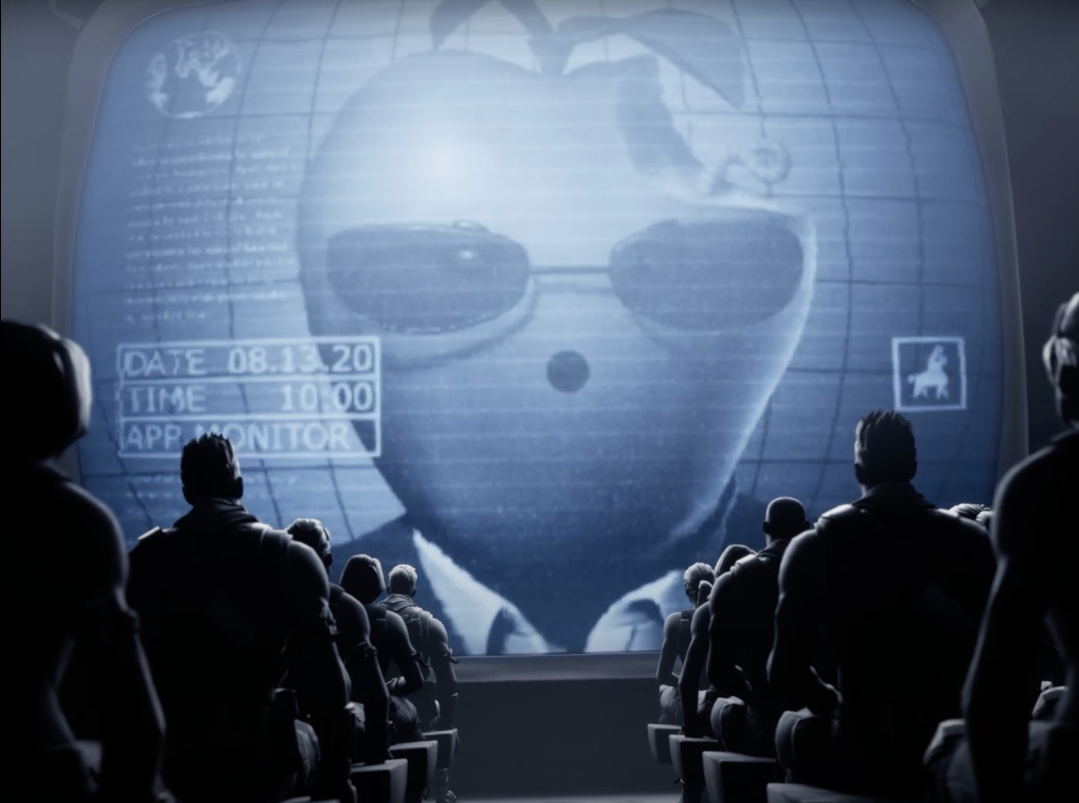 Epic Games is firing back at Apple with a parody of the company’s most iconic ad after Apple yanked “Fortnite” from the App Store.

The game company on Thursday posted a short film titled “Nineteen Eighty-Fortnite,” a play on Apple’s “1984” Super Bowl television ad. The video was in response to Apple nixing “Fortnite” from the App Store, which the company did after Epic began offering players the option to pay Epic directly for in-game purchases rather than going through the App Store, a violation of Apple’s policies.

In response, Epic filed a lawsuit seeking an injunction against Apple, claiming that Apple had engaged in monopolistic practices through its App Store.

In Epic’s video, which premiered at 4 p.m. ET on Thursday, an animated heroine runs into a room where the walls are printed with Apple’s App Store policies. The room is filled with drone-like people watching a large screen, on which a dictator with a giant apple for a head – complete with a worm sticking out – proclaims that, “This power is ours and ours alone.” The woman, who is carrying a hammer that looks like a unicorn, swings the hammer at the screen, destroying it. As she walks out, the following message scrolls across the screen:

“Epic Games has defied the App Store Monopoly. In retaliation, Apple is blocking Fortnite from a billion devices. Join the fight to stop 2020 from becoming ‘1984.’ #FreeFortnite.”

The video was a spoof of Apple’s most famous ad of all time, “1984.” The dystopian-themed ad, which premiered during the 1984 Super Bowl between Washington D.C.’s football team and the Los Angeles Raiders, was a promotion for the Macintosh computer before its launch. Directed by “Blade Runner” director Ridley Scott, the ad cost $US500,000 to create and almost never aired, as it was unpopular with Apple’s board and focus groups.

Epic’s video follows the same storyline as Apple’s ad: a woman runs toward a screen bearing the face of a dictator, then swings a sledgehammer at the screen, destroying it. At the end of Apple’s ad, words scroll on the screen announcing that Apple would introduce the Macintosh on January 24, and that people would see “why 1984 won’t be like ‘1984’,” a reference to George Orwell’s famous dystopian novel.

With the video and the legal paperwork Epic filed Thursday, the company is essentially declaring war on Apple and its App Store.

It all started when Epic announced the “Fortnite Mega Drop,” a permanent 20% discount on V-Bucks, the in-game currency used in “Fortnite.” The new prices are available on PCs and consoles, but not necessarily for mobile gamers: because Apple and Google take a 30% cut on purchases made within their respective app stores, Epic says it’s unable to provide the 20% discount for those who pay through those stores.

Instead, Epic is directing players to use its direct payment system so players can “get the best deal on V-Bucks.”

But Apple said the move violated its App Store policies, claiming Epic “did so with the express intent of violating the App Store guidelines regarding in-app payments that apply to every developer who sells digital goods or services,” according to a statement provided to The Verge. Apple yanked “Fortnite” from the store.

Almost immediately, Epic filed an injunction against Apple, claiming that the company engaged in “unfair and anti-competitive actions” undertaken “to unlawfully maintain its monopoly” in the app market.

Epic’s lawsuit comes during a moment of intense scrutiny for Apple: CEO Tim Cook recently testified before the House antitrust subcommittee over Apple’s treatment of app developers and how it applies its App Store policies.