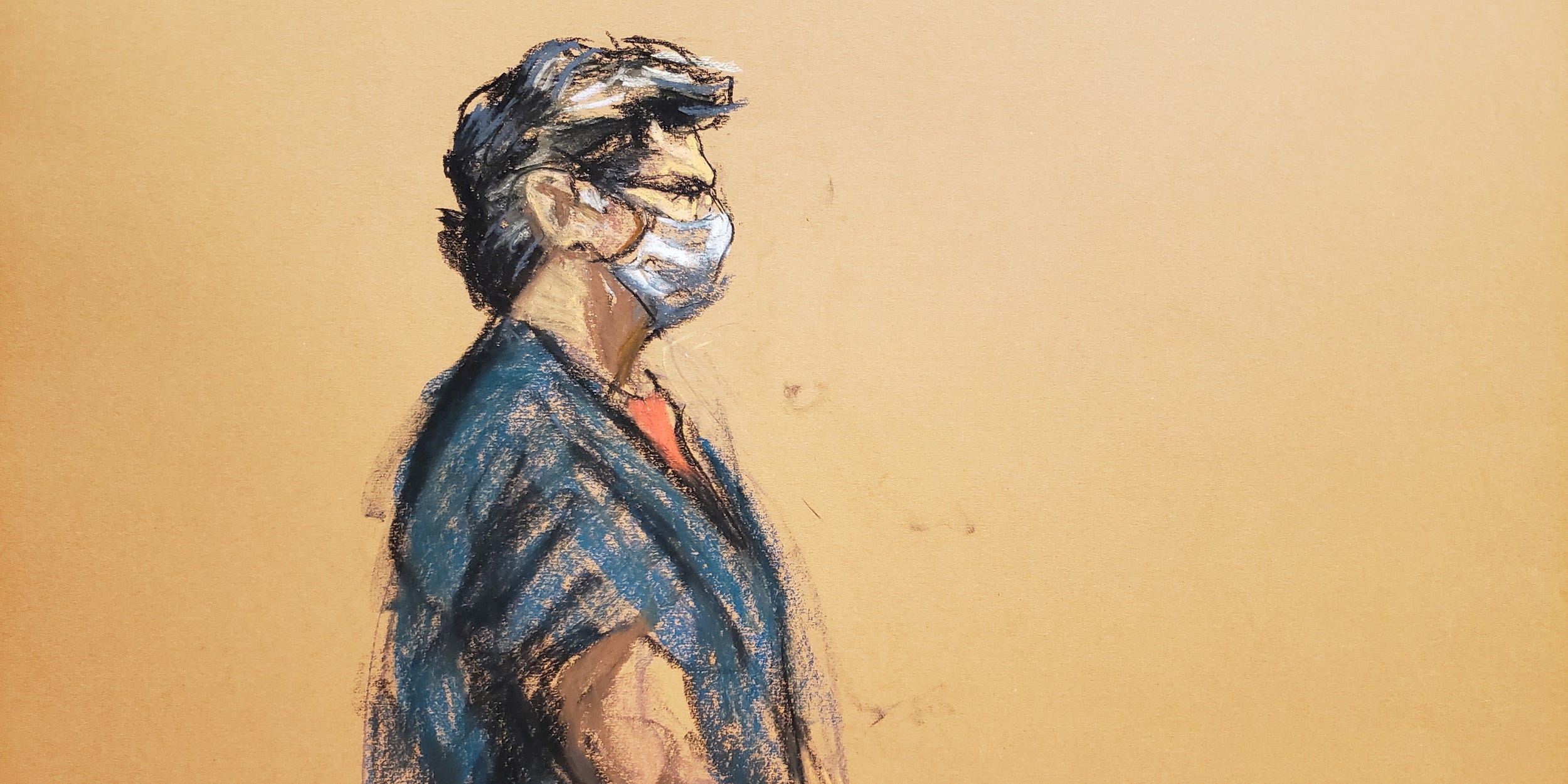 REUTERS/Jane RosenbergNXIVM cult leader Keith Raniere stands during his sentencing hearing in a sex trafficking and racketeering case inside the Brooklyn Federal Courthouse in New York, on October 27, 2020 in this courtroom sketch.

He was previously found guilty of sex trafficking, forced labour conspiracy, and racketeering but his sentencing had been delayed due to the COVID-19 pandemic.

Raniere created a secret sorority within Nxivm, a purported self-help program called DOS, and brainwashed women in the sorority so they’d become his sex slaves and get branded with his initials.

Some members who experienced this abuse left Nxivm and started to speak out, hoping media attention would lead to Raniere’s arrest and sentencing. Former followers including actor Sarah Edmondson, India Oxenberg, and Mark Vicente have spoken about their experiences in a New York Times expose, on podcasts, in memoirs, and on docuseries like HBO’s “The Vow” and Starz’ “Seduced.”

Oxenberg, Vicente, Edmondson, and other victims gave impact statements during Raniere’s sentencing, and then spoke out on social media once they learned Raniere’s fate.

Mark Vicente, who met Raniere while on vacation, became his friend, and filmed Nxivm events at Raniere’s request, shared the news of his sentencing on Twitter with the words “120 years!”

After leaving the alleged sex cult in 2017 following the departure of his wife Bonnie Piesse, also a member, Vicente used the footage he’d shot for HBO’s docuseries “The Vow.”

“Dynasty” actor Catherine Oxenberg, who spent years trying to get her daughter, India Oxenberg, out of Nxivm, thanked the US Attorney of the Eastern District of New York on Twitter, saying she was “forever” grateful the agency saved her daughter and “countless others.”

“TY for putting this predator behind bars,” she wrote.

U saved my daughter India and countless others, I am forever grateful. TY for putting this predator behind bars https://t.co/3MBy7Kiebr

In a separate tweet, Catherine Oxenberg criticised Raniere for saying he was “deeply remorseful,” despite maintaining his innocence.

“Only a monster would discredit his victims,” Oxenberg wrote. “Remorseful for what? Himself? Typical sociopath.”

Only a monster would discredit his victims.. remorseful for what? himself? Typical sociopath https://t.co/wlEkygOFJO

Ivy Nevares, a former Nxivm member who had lived with Raniere,published a victim impact statement she read at his sentencing on Twitter.

Her statement details her time living with Raniere, in which she says he controlled how much she ate and weighed, made her contemplate suicide, and subjected her to “nearly 17 years of indentured servitude.”

“You have no remorse over what you’ve done. You blame your victims and direct your flying monkeys to create insults to legitimate social movements, as you try to fight your imaginary injustice,” she said. “It is with a very careful stroke of my pen that I say and mean every word here: you are and forever will be remembered as the most dangerous predator of all. May you live long enough in prison to know the hell you put me and others through.”

Sarah Edmondson, who left Nxivm after she was branded while in DOS, said on Twitter that she was “grateful to the American justice system for their thorough and meticulous process in holding a monster accountable.”

Edmondson also ran Nxivm’s Vancouver centre and met her husband, Anthony “Nippy” Ames, while in the cult. Raniere wrote the couple’s vows for their wedding.

I am so grateful to the American justice system for their thorough and meticulous process in holding a monster accountable. This is what justice looks like. It took a team, including many people before us, to bring Keith down. The world is safer now. https://t.co/e5sfyrFzS4

“This is what justice looks like. It took a team, including many people before us, to bring Keith down. The world is safer now,” Edmondson wrote.