'He tries to divide us': More and more former military leaders are calling Trump out over his handling of protests and nationwide unrest 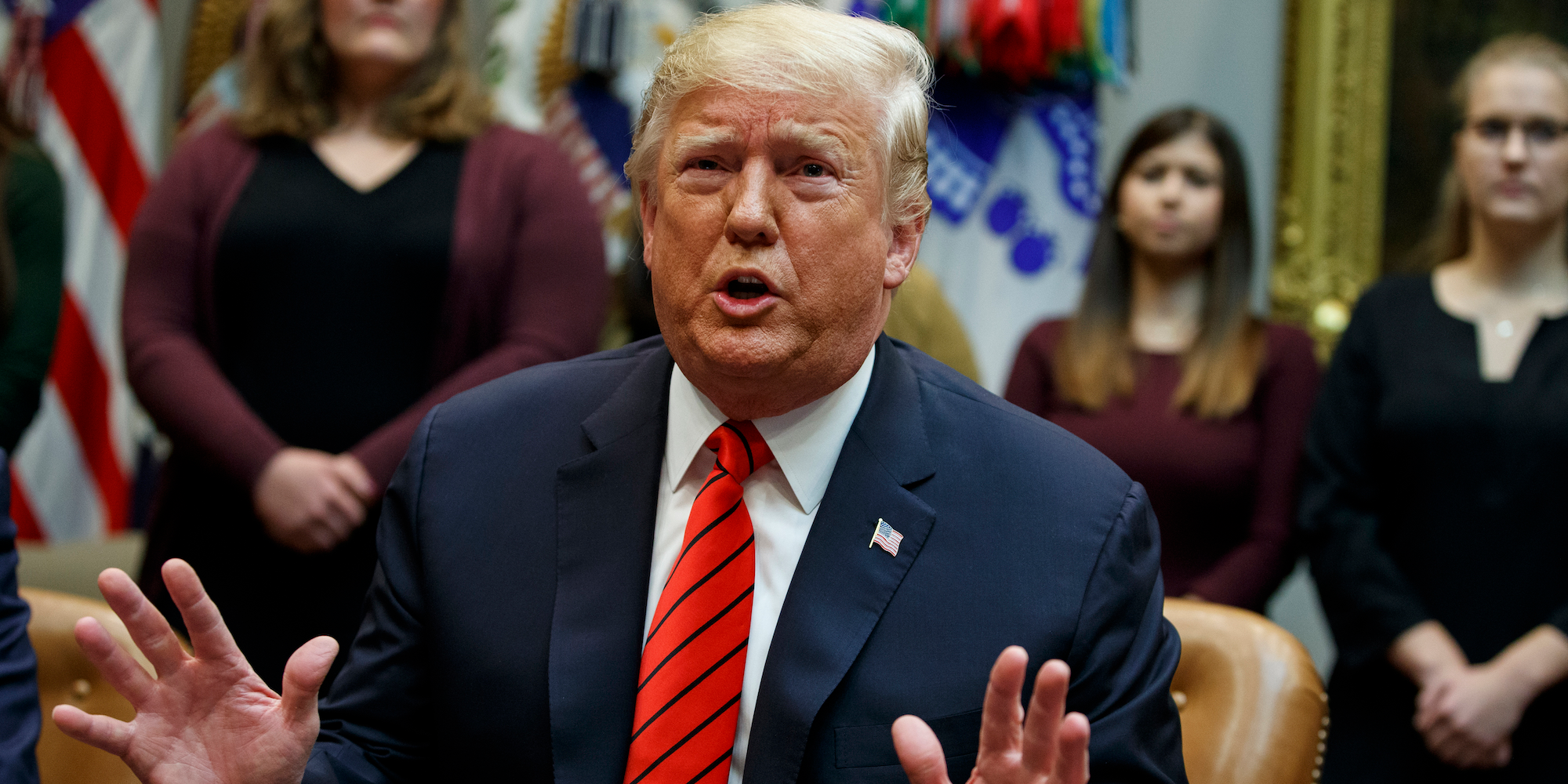 Associated Press/Evan VucciPresident Donald Trump speaks during an event where he congratulated astronauts Jessica Meir and Christina Koch as they conduct the first all-female spacewalk, from the Roosevelt Room of the White House, Friday, Oct. 18, 2019, in Washington.

Former military leaders, including some who have largely kept their thoughts on the president to themselves, have been speaking out this week against President Donald Trump and his administration’s handling of nationwide protests.

On Monday, Trump announced plans for a tough military crackdown on ongoing unrest. He then walked through Lafayette Park, which had been forcefully cleared of peaceful protesters moments earlier, to take photos holding a bible at a damaged church.

The controversial stunt followed a call with state leaders earlier in the day, during which Secretary of Defence Mark Esper referred to American cities as a “battle space,” one that both he and Trump urged governors to “dominate.”

For many former military leaders, the events of that day appear to have finally pushed them to speak out. 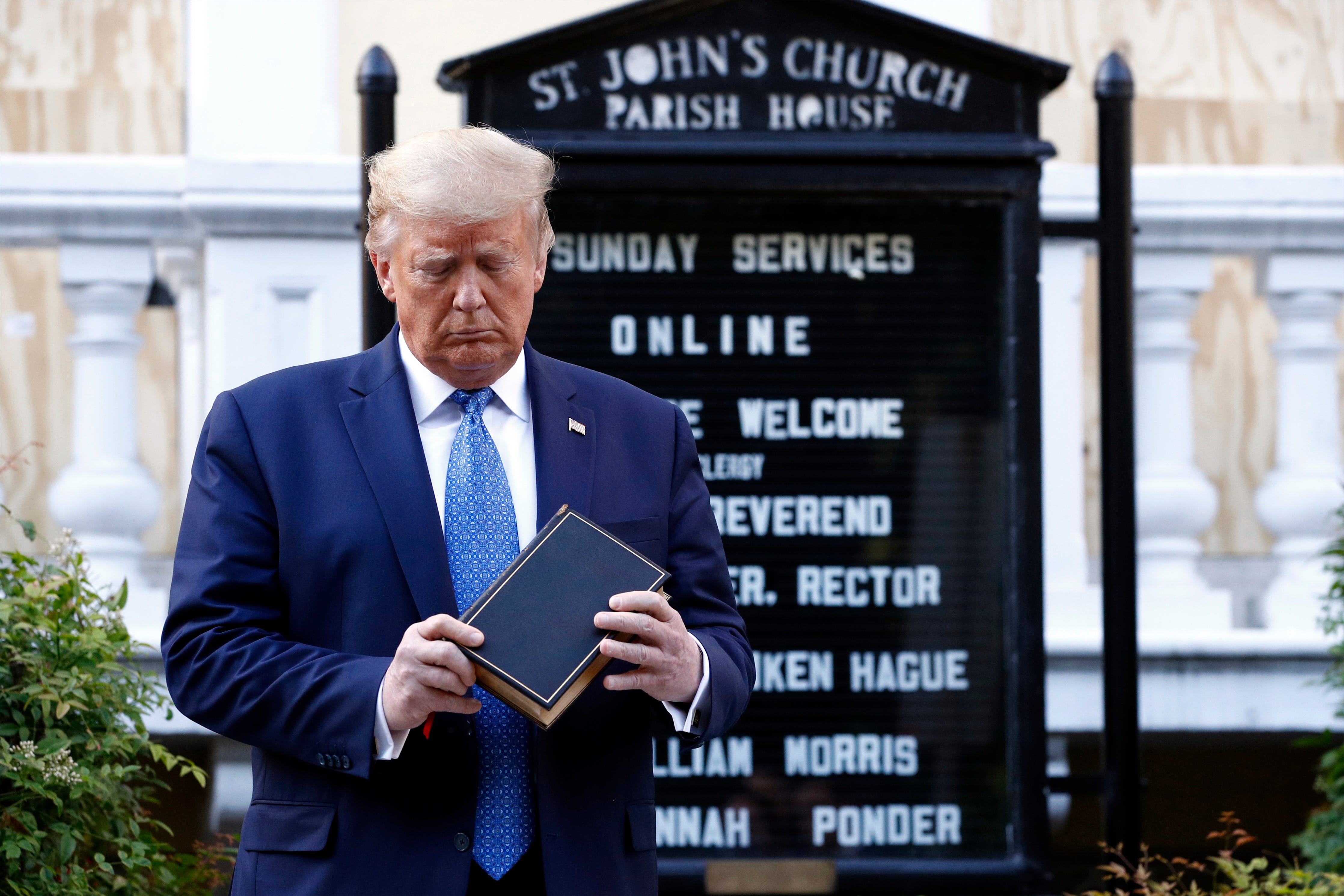 AP Photo/Patrick SemanskyPresident Donald Trump with a Bible outside St. John’s Church across Lafayette Park from the White House, June 1, 2020.

“The slide of the United States into illiberalism may well have begun on June 1, 2020. Remember the date. It may well signal the beginning of the end of the American experiment,” former US Forces-Afghanistan commander Gen. John Allen wrote in an article in Foreign Policy.

“To even the casual observer,” he wrote, “Monday was awful for the United States and its democracy.”

“I’ve fought in overseas wars,” he told CNN Thursday. “I never believed the constitution to be under threat until recently.”

“I have watched this week’s unfolding events, angry and appalled,” Jim Mattis, Trump’s former secretary of defence and a retired Marine Corps general, wrote in a statement that was first published in The Atlantic.

“Donald Trump is the first president in my lifetime who does not try to unite the American people – does not even pretend to try. Instead, he tries to divide us,” he wrote, characterising the president a threat to the Constitution.

Mattis is not the only former secretary of defence to speak out.

“I have watched in deep distress as events of the past week have unfolded, unravelling so many of the values that I hold dear as an American,” William Perry, former President Bill Clinton’s secretary of defence, said in a statement provided to POLITICO.

“I support the right of protesters to demonstrate peacefully, and deplore the suggestion that our military should be used to suppress them,” he said, stressing that the US military “was never intended to be used against American citizens.” 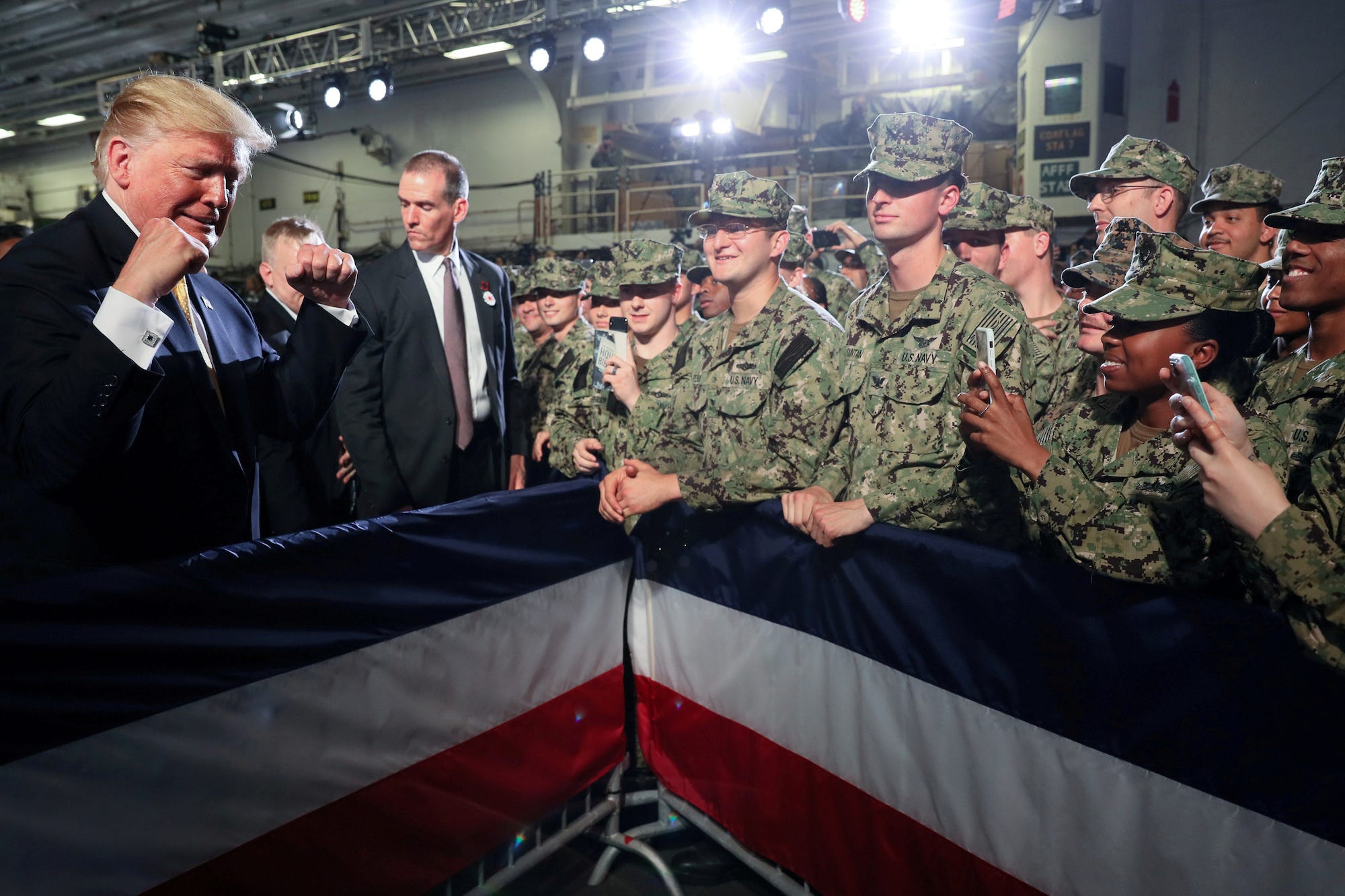 REUTERS/Jonathan ErnstUS troops take photos of President Donald Trump aboard the USS Wasp at JMSDF Yokosuka base, south of Tokyo, May 28, 2019.

Writing that Monday’s events “sickened” him, he said: “I have to date been reticent to speak out on issues surrounding President Trump’s leadership, but we are at an inflection point, and the events of the past few weeks have made it impossible to remain silent.”

Mullen said the president “laid bare his disdain for the rights of peaceful protest in this country, gave succor to the leaders of other countries who take comfort in our domestic strife, and risked further politicizing the men and women of our armed forces.”

Mullen also criticised the characterization of American cities as battlespaces, as have other former military leaders.

“The ‘battle space’ of America???” he wrote on Twitter this week. “Not what America needs to hear…ever, unless we are invaded by an adversary or experience a constitutional failure…ie a Civil War.”

Retired Navy Adm. James Stavridis, who served as the Supreme Allied Commander of NATO, said that while it is necessary to restore order, “it hurt” to watch authorities forcefully confront peaceful protesters in DC.

He called on current leaders to keep the military “above the fray of domestic politics,” writing that “we cannot afford to have a future Lafayette Square end up looking like Tiananmen Square.”

‘There is nothing morally right about that’ 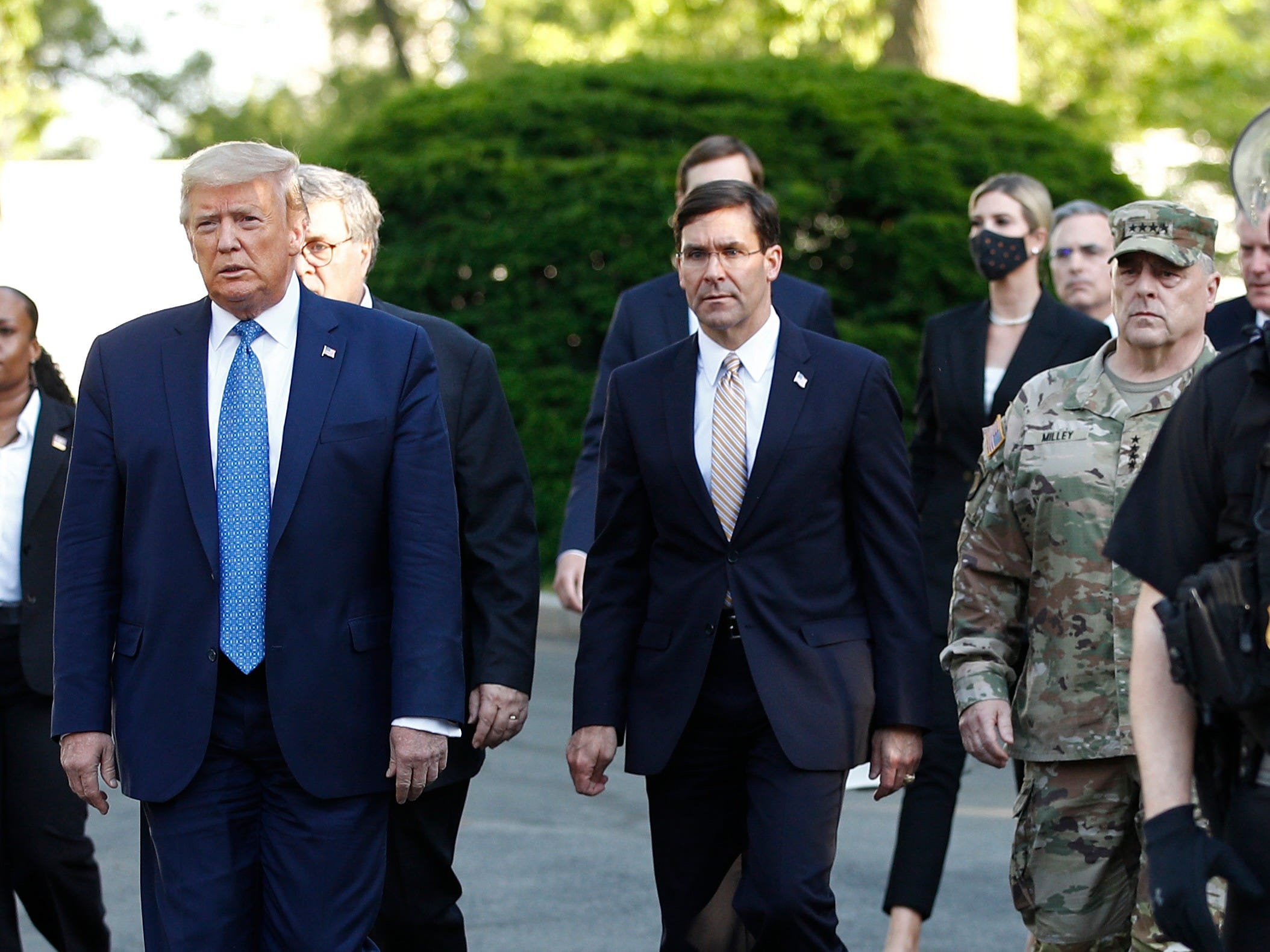 Retired Navy Adm. William McRaven, the Navy SEAL who oversaw the Osama bin Laden raid, said Friday on MSNBC’s “Morning Joe” that there was “nothing morally right” about forcefully clearing out protesters for a presidential photo op.

“That’s just not right,” he said. “You’re not going to use, whether it is the military or the National Guard or law enforcement, to clear peaceful American citizens for the president of the United States to do a photo op. There is nothing morally right about that.”

Retired Gen. Richard Myers, former President George Bush’s chairman of the Joint Chiefs of Staff, told CNN Thursday that he is “glad” he does not have to advise Trump.

Commenting on the developments in DC on Monday, he said: “As I understand it, that was a peaceful protest that was disturbed by force, and that’s not right. That should not happen in America. And so I was sad. I mean, we should all shed tears over that particular act.”

Former Chairman of the Joint Chiefs of Staff Gen. Martin Dempsey tweeted this week that “America is not a battleground. Our fellow citizens are not the enemy.”

On Thursday, Dempsey told NPR that “the idea that the president would take charge of the situation using the military was troubling to me.”

Throughout his presidency, Trump has regularly surrounded himself with military leaders, often heaping praise on what he has called “my generals.”

Trump, who has not served in the military, has even suggested that he would have made a good general. But former military leaders are suggesting that he could do better as commander-in-chief.