15 football players who left the game behind and became actors 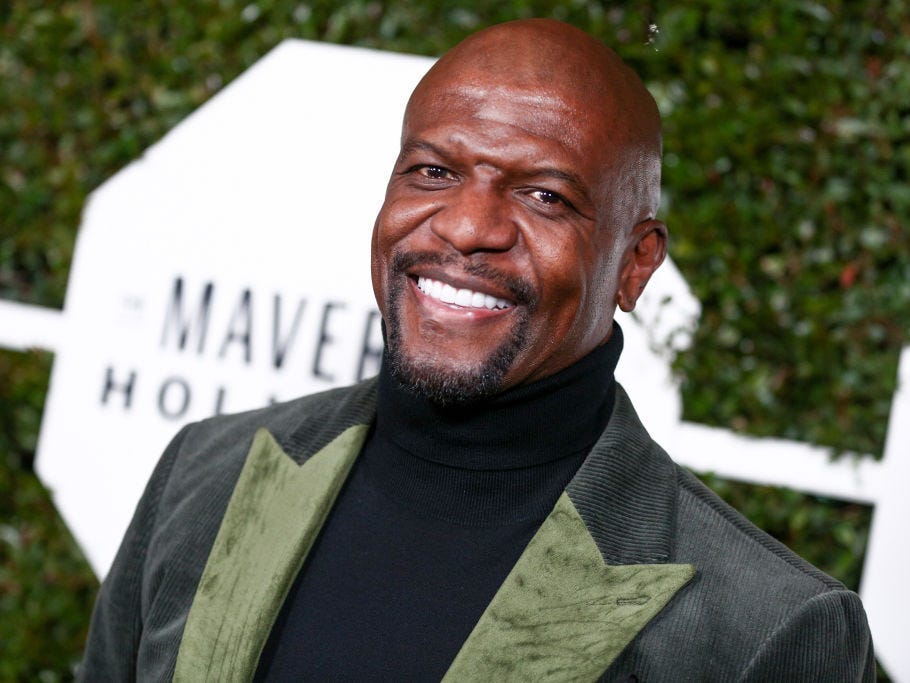 Rich Fury/Getty ImagesTerry Crews played in the NFL before becoming an actor.

Acting isn’t the most stable career path, but it could be argued that football is even less so. One bad injury could take you out of the game forever, like it did with some of these stars.

These 15 football players all turned to acting after their sports careers ended, with varying levels of success. Dwayne Johnson, the most bankable actor in Hollywood, first tried to hack it as a football player before starring in the “Fast and Furious” franchise.

Keep scrolling to learn more about 15 football players who switched the gridiron for movie sets.

Before “Brooklyn Nine-Nine” and “White Chicks,” Terry Crews was in the NFL for six years. 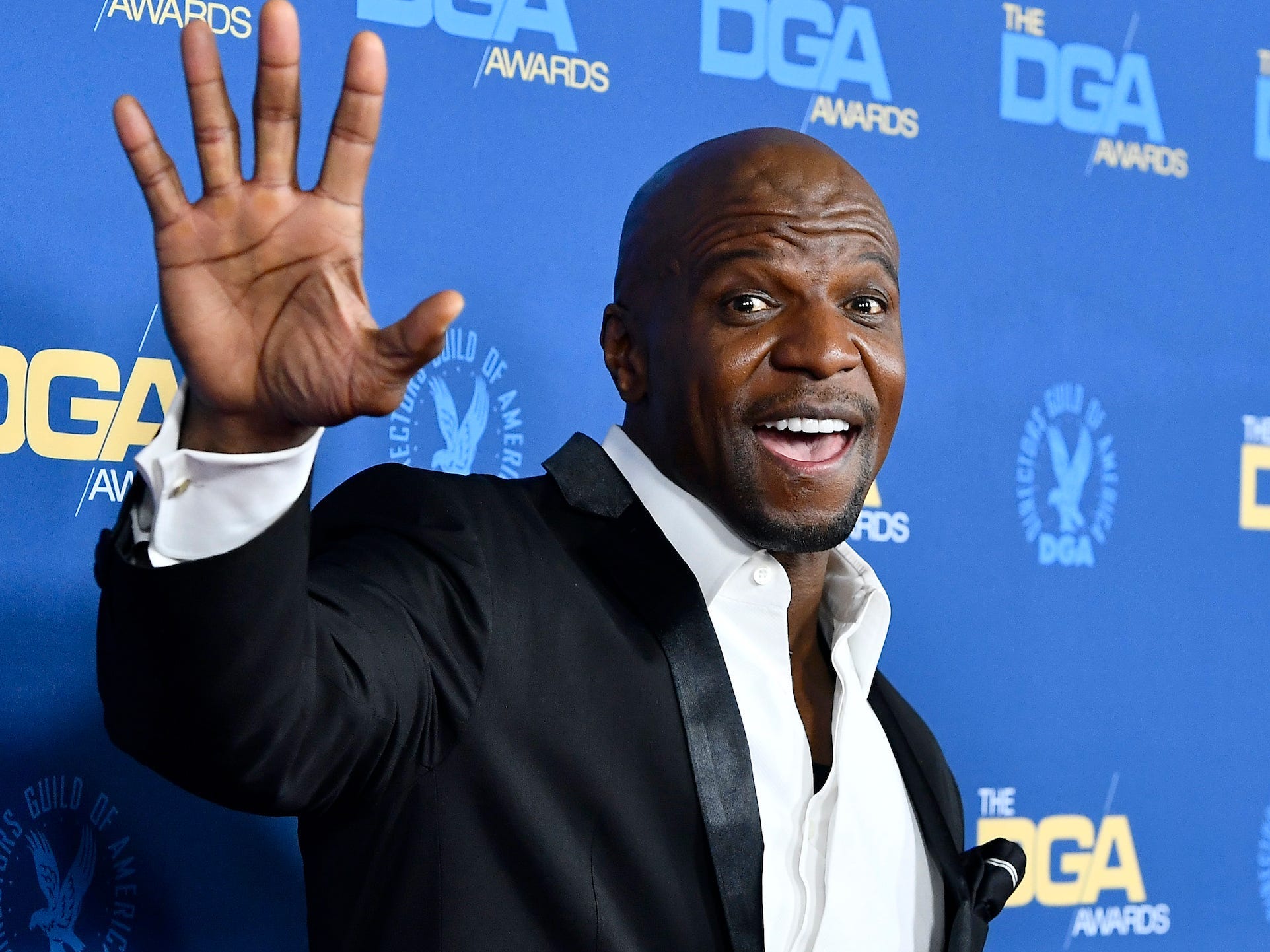 Crews is best known for his role as Terry Jeffords in “Brooklyn Nine-Nine,” though he has a very extensive IMDb. He made his film debut back in 2000 with a role in the sci-fi film “The 6th Day.”

But before that, Crews was drafted in the 1991 NFL Draft to the Los Angeles Rams. He played for the Rams, San Diego Chargers, Rhein Fire (an NFL Europe team), the Washington Football Team, and the Philadelphia Eagles before retiring in 1996.


15 of the best performances by athletes in movies

Dwayne Johnson was signed to a Canadian football team before concentrating on wrestling, then acting. 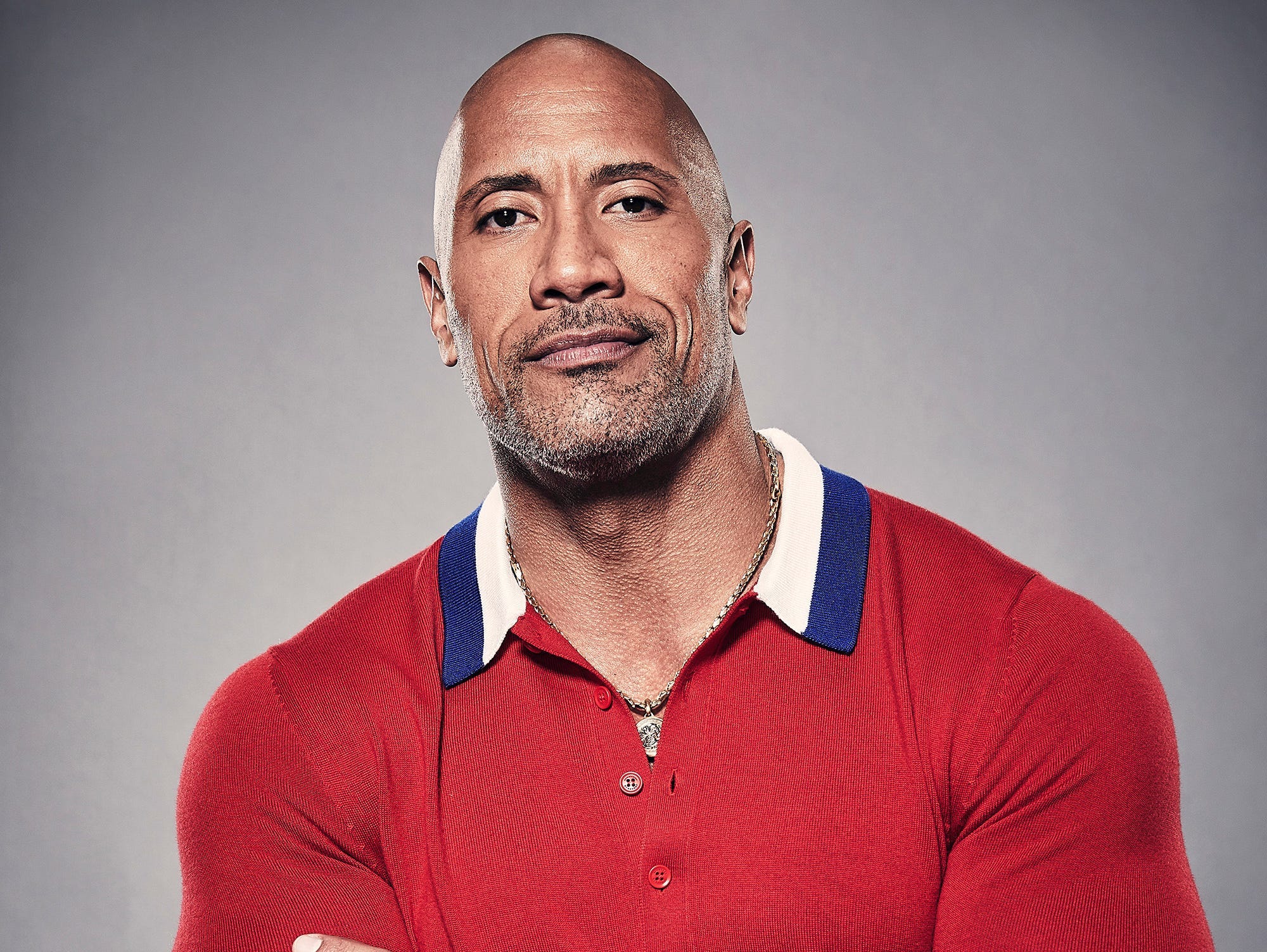 Before he was The Rock, Johnson was a successful football player. He even played for the University of Miami when they won the National Championship in 1991. After graduating, he signed with the Calgary Stampeders on their practice squad, but was cut just two months into the season.

After that, Johnson followed in his father’s footsteps and became a professional wrestler. He made his film debut in 2001’s “The Mummy Returns,” and has been acting ever since. In fact, he’s been Hollywood’s most bankable actor for the last two years.

Terry Bradshaw was the first former NFL player to earn a star on the Hollywood Walk of Fame. 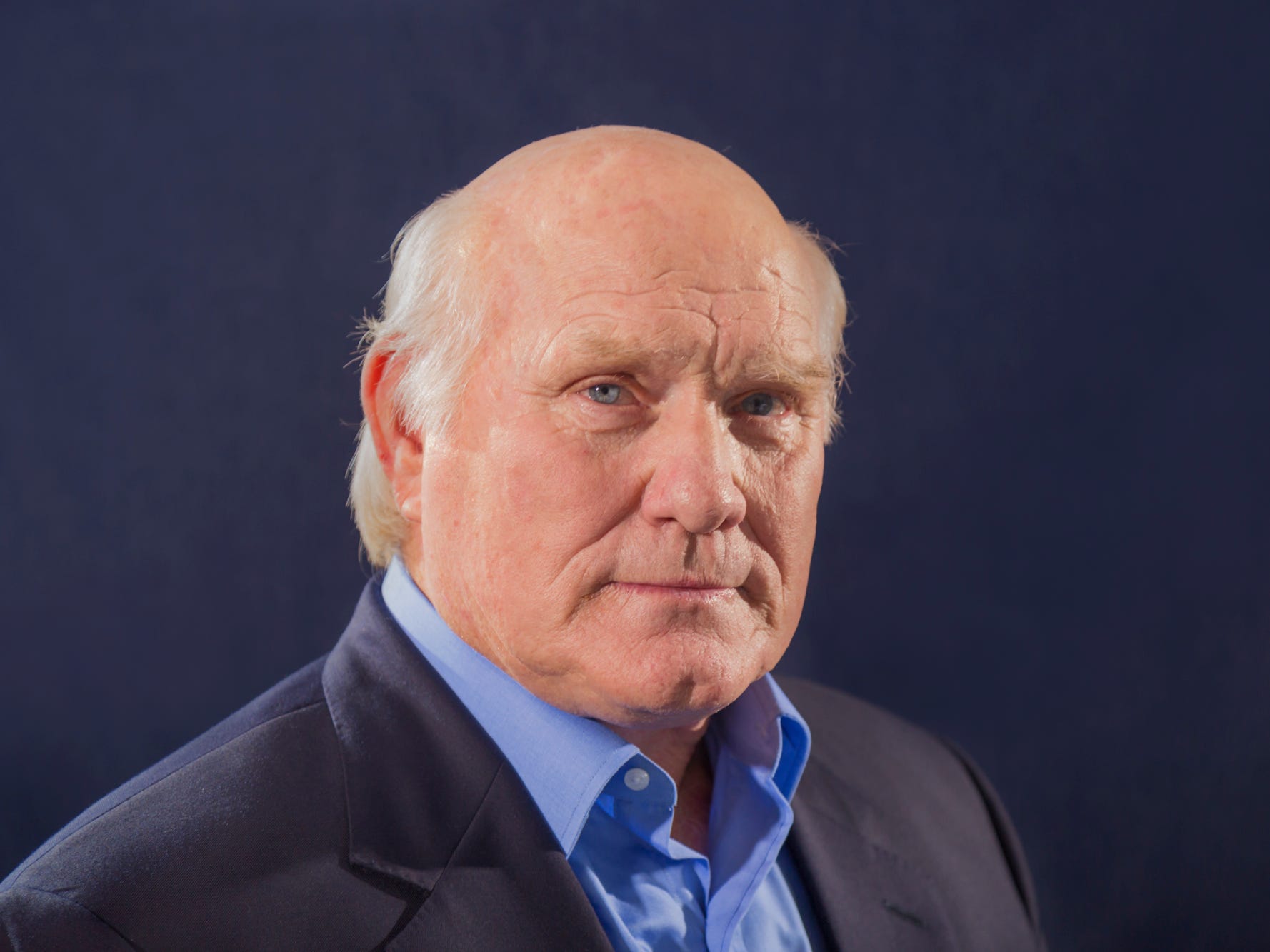 After 13 years of playing for the Pittsburgh Steelers, Bradshaw retired from the NFL in 1983. Ever since, Bradshaw has kept plenty busy, with roles in “Blossom,” “Malcolm in the Middle,” “King of the Hill,” and most famously, the Sarah Jessica Parker/Matthew McConaughey rom-com “Failure to Launch.” Bradshaw and Kathy Bates played the parents of McConaughey’s character.

Bradshaw is also a successful singer – he’s released multiple albums, and he competed on the very first season of “The Masked Singer” as the Deer.

Carl Weathers is best known as either Apollo Creed from the “Rocky” films or as Greef Karga in “The Mandalorian,” but he started out as a football player. 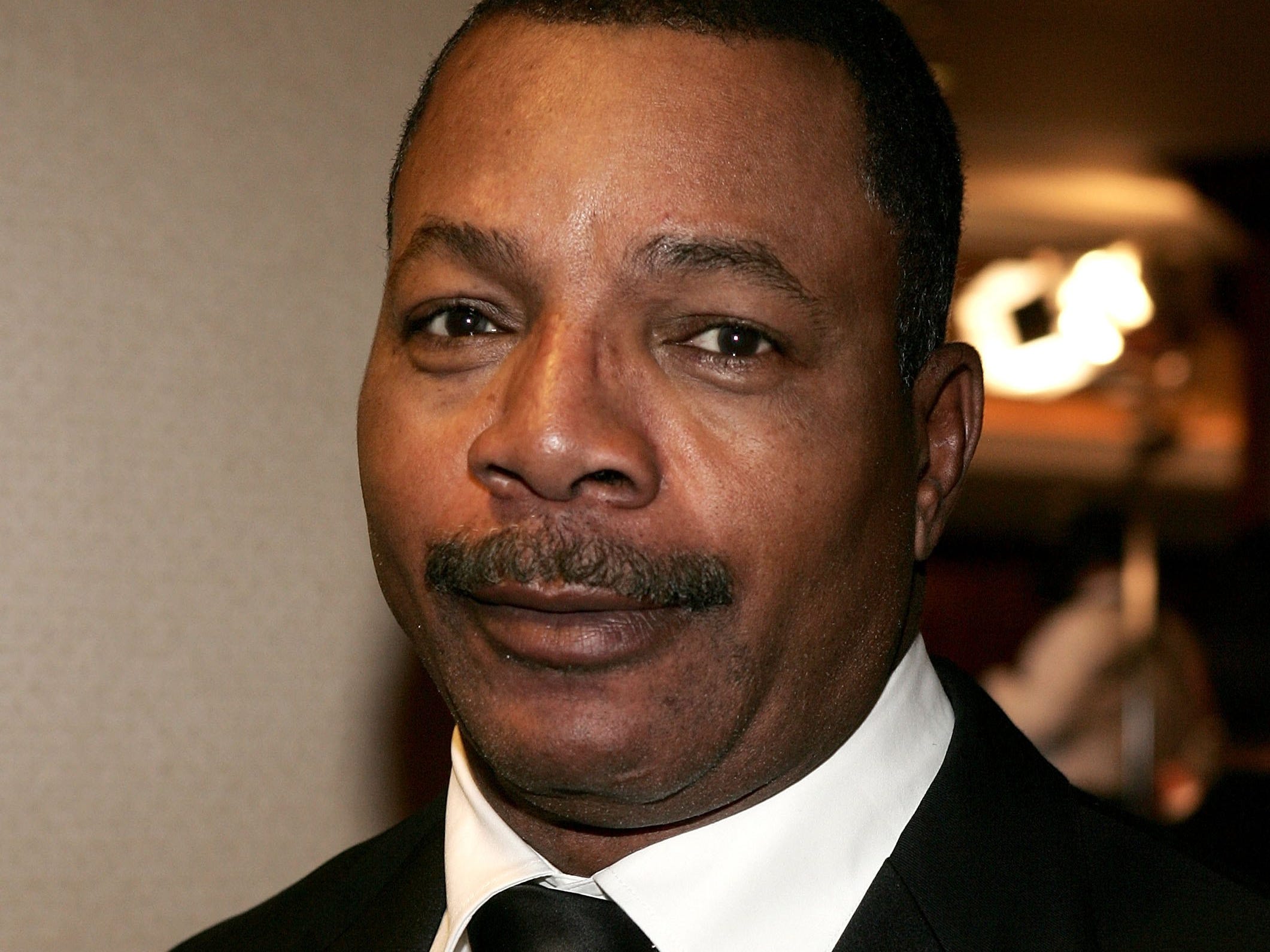 In fact, Weathers has been part of four of the most iconic franchises ever (“Rocky,” “Predator,” “Toy Story,” and “Star Wars”). He’s also well-known for his part in “Happy Gilmore” and his fictionalized take on himself in “Arrested Development.”

Before acting, though, Weathers played for the then-Oakland Raiders for one season, and then moved to the Canadian Football League. He officially retired in 1974.

Nnamdi Asomugha is considered one of the greatest Raiders players of all time. But he’s also steadily grown into one of Hollywood’s breakout stars. 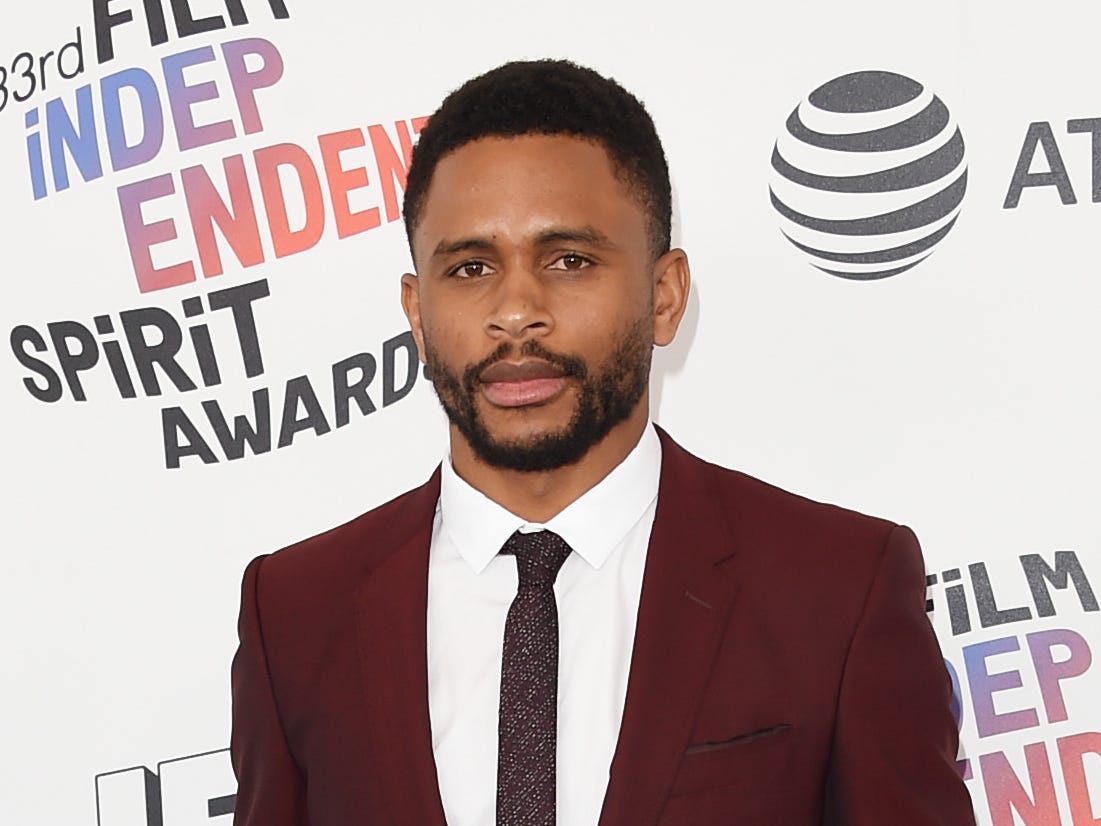 Four years later, he had already gained enough clout to produce and star in 2017’s “Crown Heights,” for which he was nominated for a Film Independent Spirit Award. In 2020, he produced and starred in “Sylvie’s Love,” which has an impressive 92% on Rotten Tomatoes.


10 of the most inspirational second careers of professional athletes

Joe Namath made his “Broadway Joe” nickname legitimate when he starred in the 1983 revival of “The Caine Mutiny Court-Martial.” 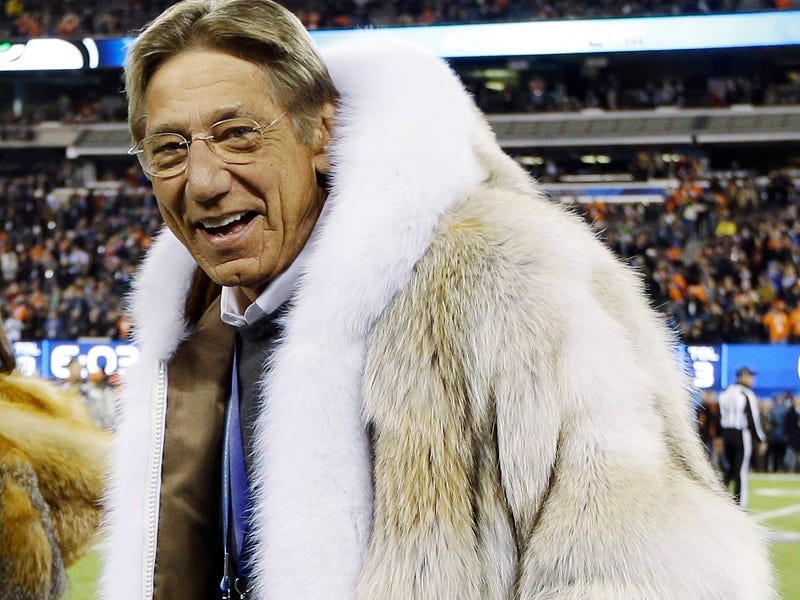 As Namath is one of the most flamboyant (and personable) football players of all time, it’s not shocking that he had a successful career as a theatre actor after he retired from the NFL in 1977.

In addition to theatre, he also appeared in films such as “Avalanche Express” and “The Last Rebel,” as well as TV shows like “The Love Boat” and “The Waverly Wonders.”

Brett Favre dabbled in acting when he appeared in “There’s Something About Mary.” 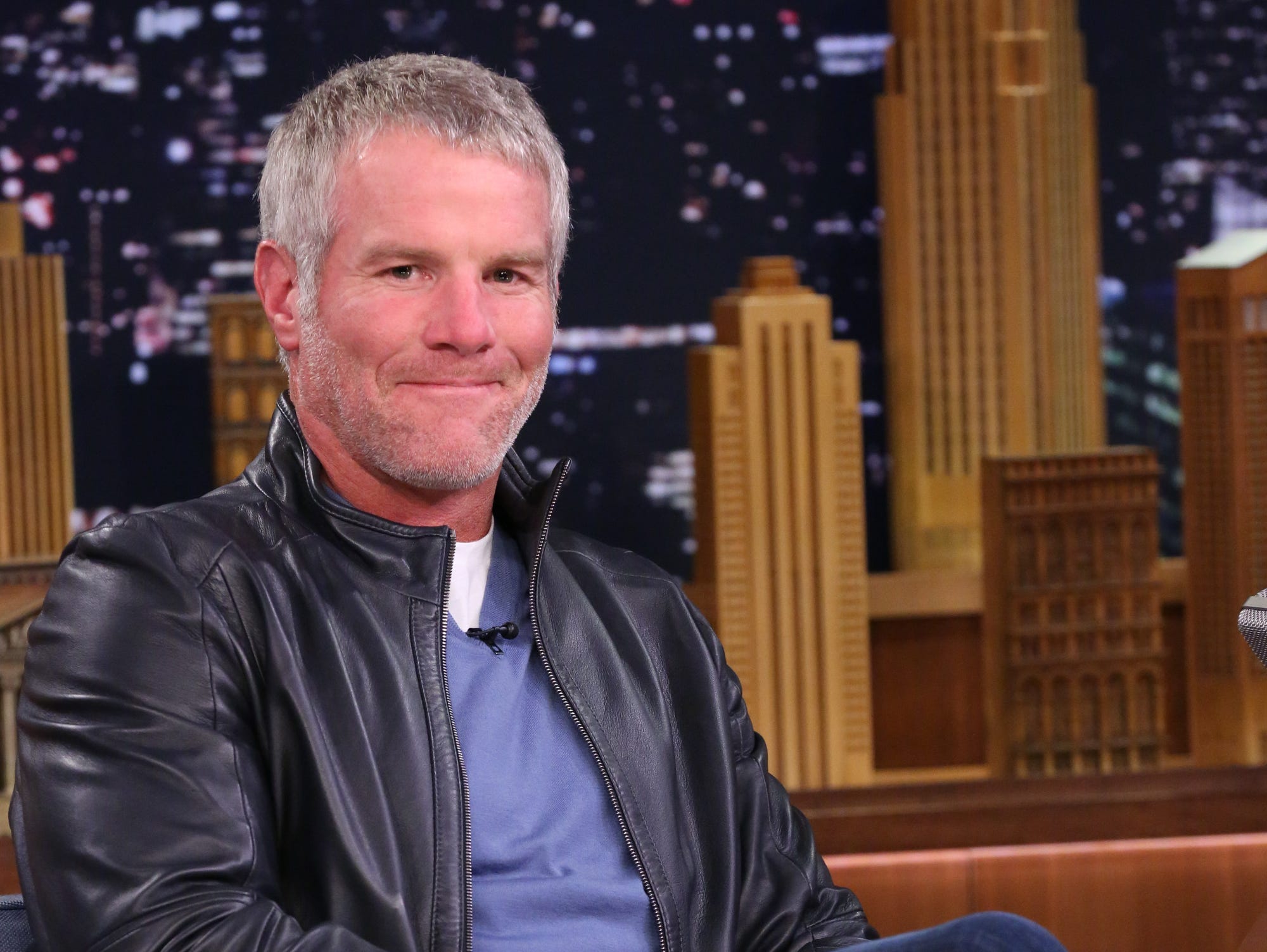 Favre is still best known for his career as the Green Bay Packers’ quarterback, but there’s definitely a population of people out there who would recognise him from his appearance in 1998’s “There’s Something About Mary” as a fictionalized version of himself.

He continued to play football, however, ultimately retiring (for the second time) after the 2010 season.

John David Washington dabbled in professional football before following in his father’s footsteps. 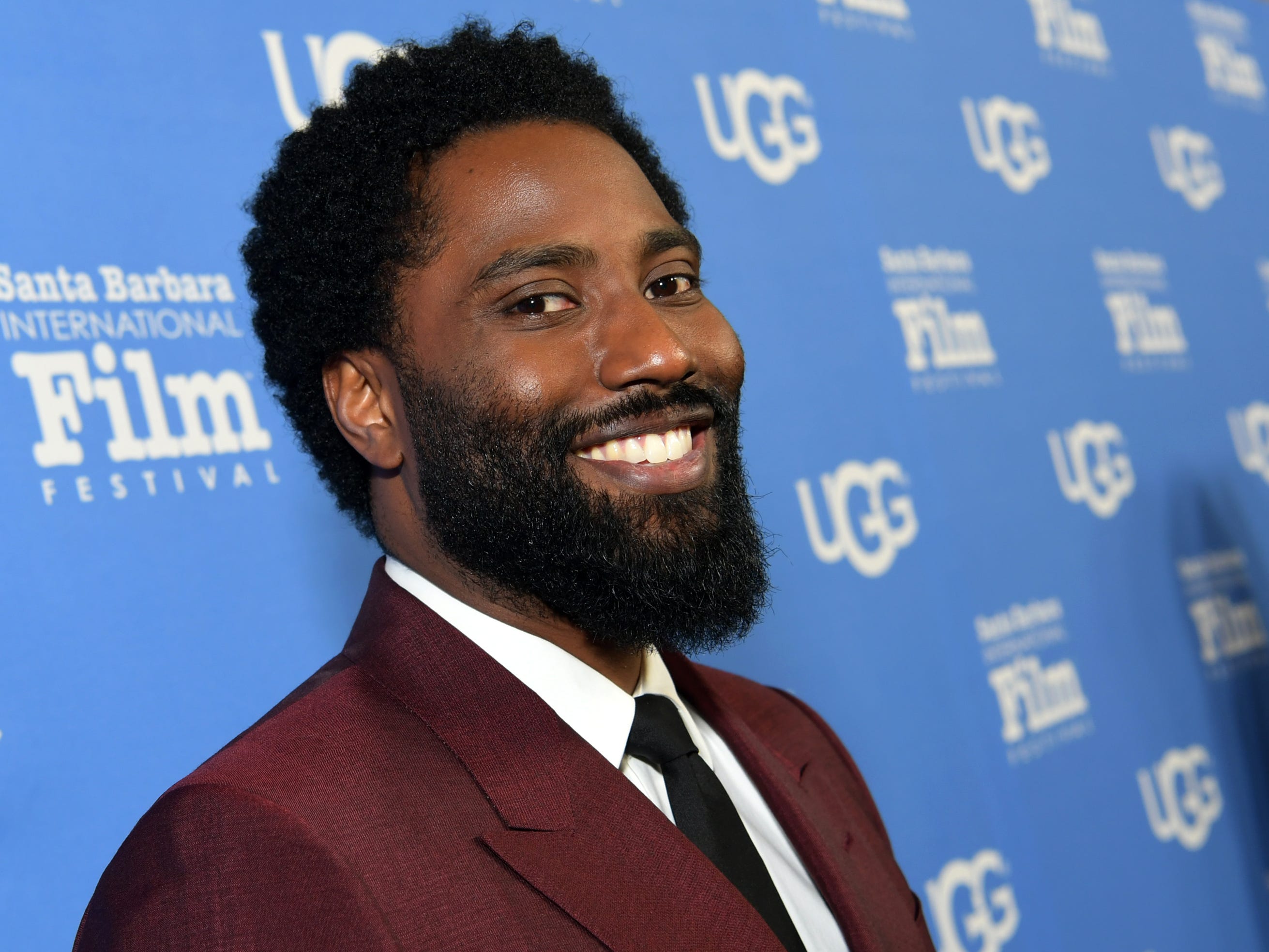 Washington (son of Denzel Washington) was signed to the Los Angeles Rams in 2006, was released, and then re-signed to their practice squad. He also played for an NFL Europe team and then moved back to the states to play for the UFL until 2012, when the league folded.

After that, Washington followed in his father’s footsteps – and he’s been a star ever since. He first starred in “Ballers” (alongside Dwayne Johnson), before making his way to film. He starred in 2018’s “BlacKkKlansman,” 2020’s Christopher Nolan time epic “Tenet,” and will co-star with Zendaya in “Malcolm and Marie.”

Dean Cain was signed to the Buffalo Bills before becoming Superman. 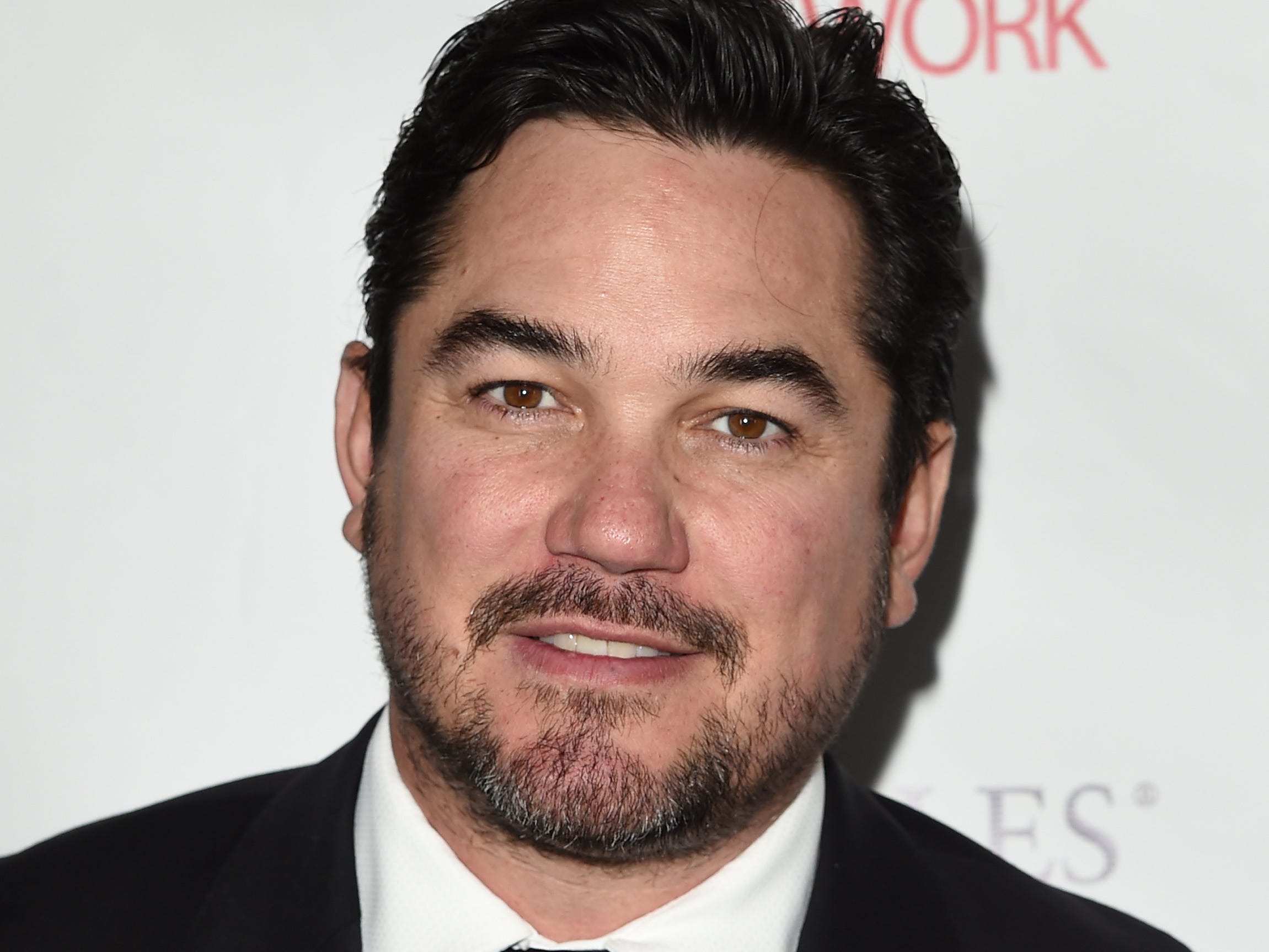 Cain was signed to the Buffalo Bills as a free agent in 1988 after graduating from Princeton, but a knee injury took him out of the game before his career could really get started.

Instead, he pivoted to acting, scoring roles in “Beverly Hills, 90210” and “A Different World” before getting cast in the role that would change his life – everyone’s favourite mild-mannered reporter/superhero Clark Kent in “Lois & Clark: The New Adventures of Superman” from 1993 to 1997.

Brian Bosworth was a highly successful college player and a less-than-iconic NFL player — and now, he acts. 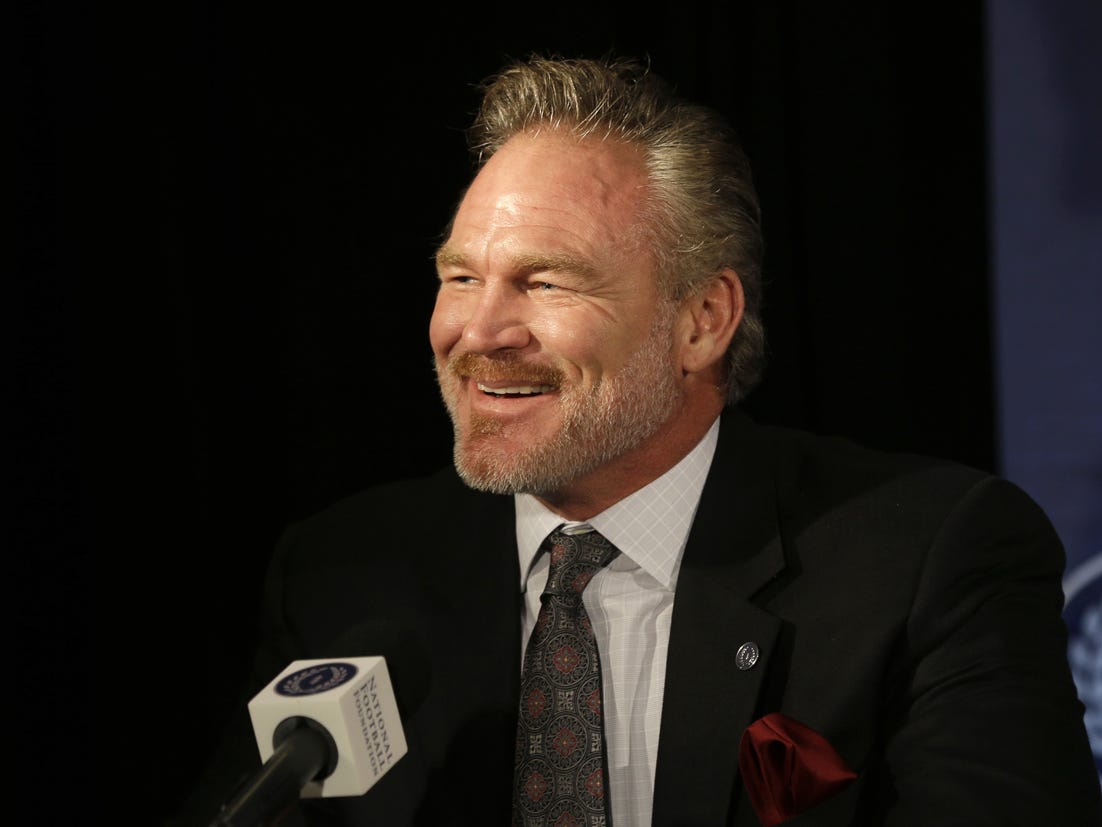 Bosworth was very successful during his college career as part of the Oklahoma Sooners – if not highly controversial. Once he graduated and was drafted to the NFL, the hype was real. However, he only lasted two years on the Seattle Seahawks before a shoulder injury forced him to retire in 1989 at age 24.

Burt Reynolds was, of course, one of the biggest movie stars of all time — but did you know he had a good chance of going pro before sustaining an injury in college? 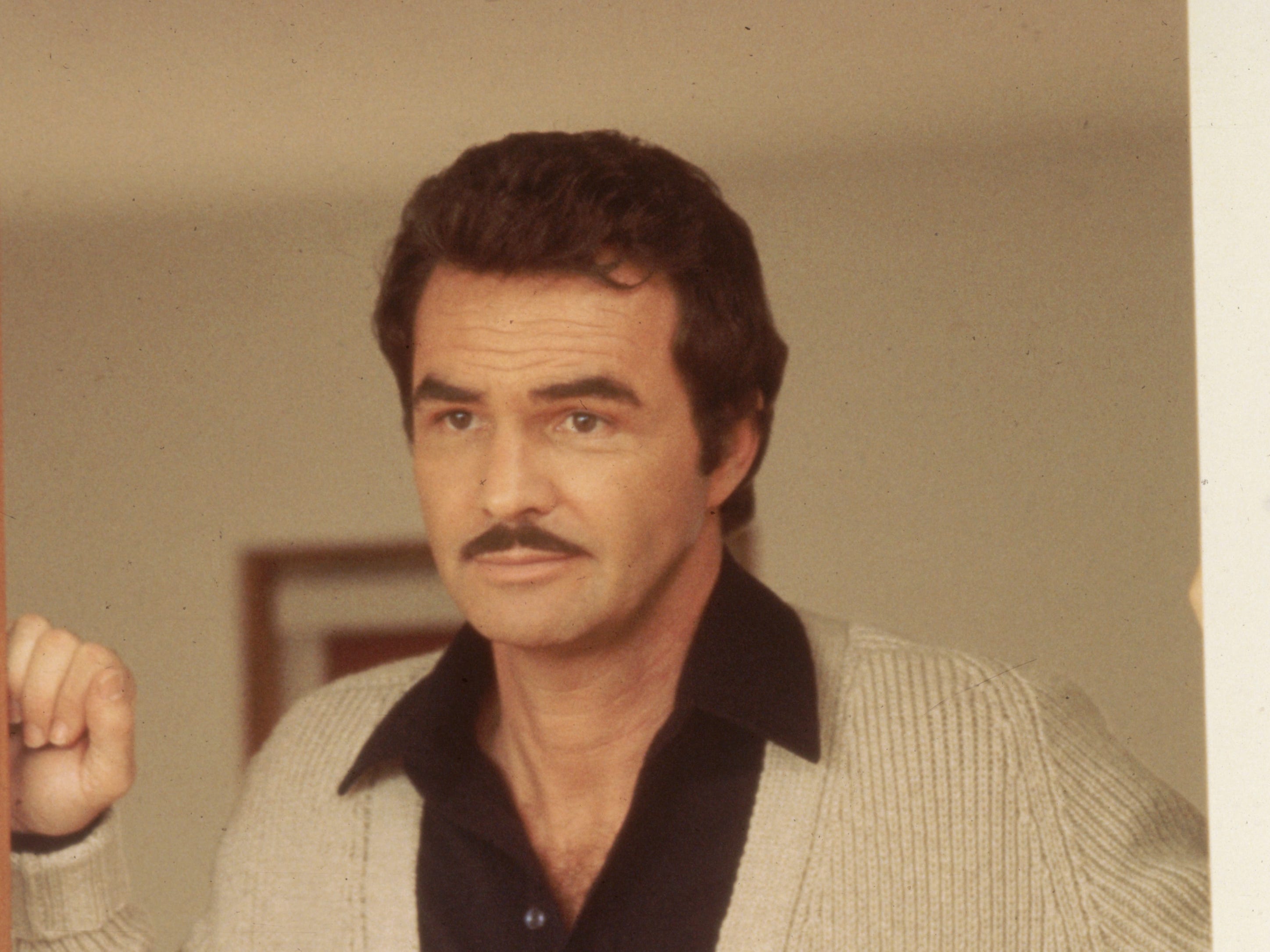 Reynolds attended Florida State University, a Division I school, on a football scholarship and played halfback. But before he could really go pro, he sustained multiple knee injuries and was forced to give up football, and he dropped out of FSU.

However, it all turned out all right for Reynolds. He began acting in the late ’50s, made his film debut in 1961, earned his first Golden Globe nomination in 1971 for the series “Dan August,” and was nominated for an Oscar for 1997’s “Boogie Nights,” among many other accomplishments. He died in 2018 at age 82.

Jim Brown is considered by some to be the greatest football player of all time, but he’s also had a successful acting career. 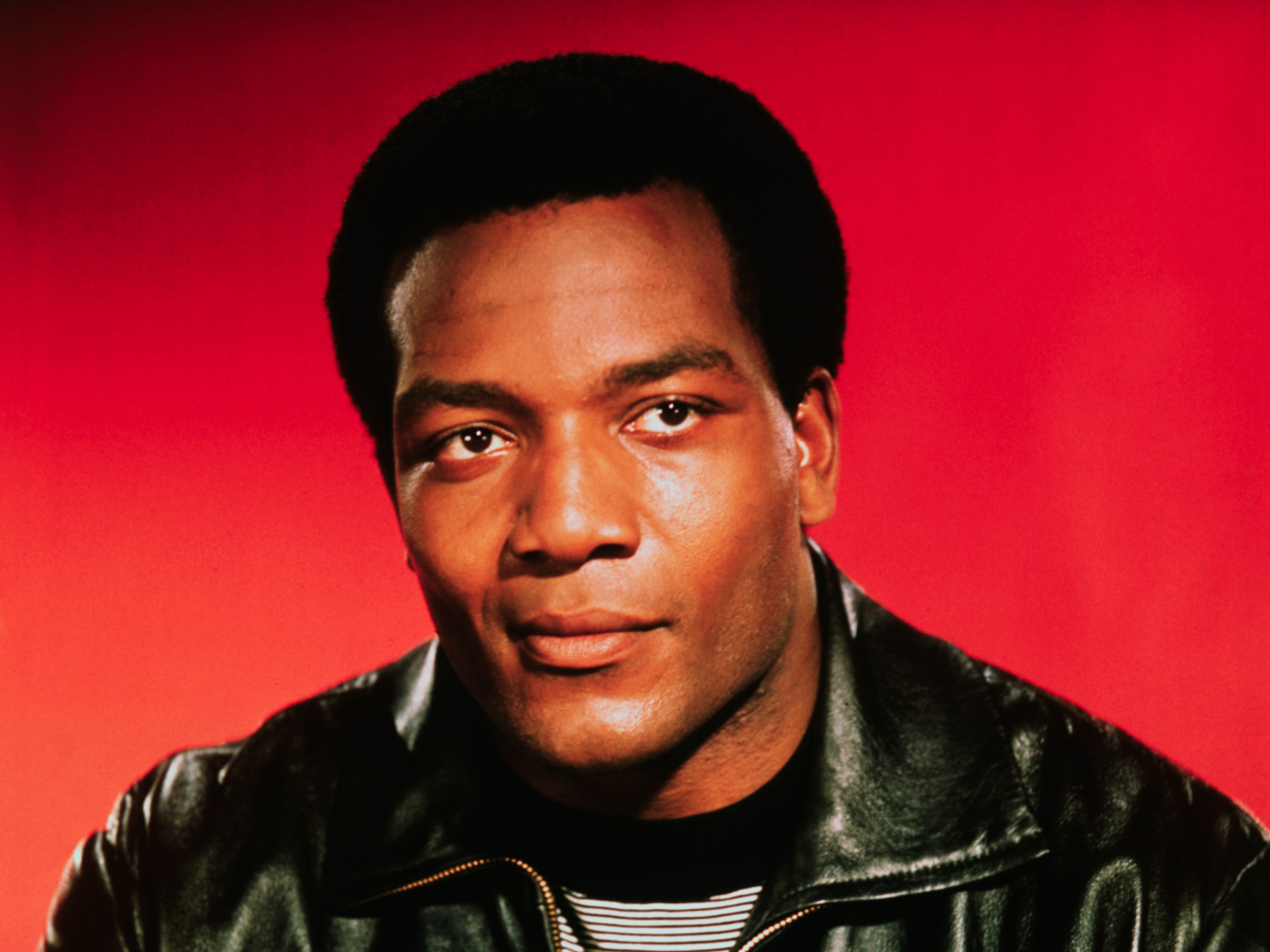 Brown played football in the ’50s and ’60s before retiring in 1965 with a Super Bowl ring, nine Pro Bowl appearances, and multiple league records under his belt.

In 1966, he was cast in “The Dirty Dozen” – the film made him a star. He’d go on to star in multiple films, including many blaxploitation films in the ’70s. Most recently, he cameoed as himself in the 2014 film “Draft Day.” 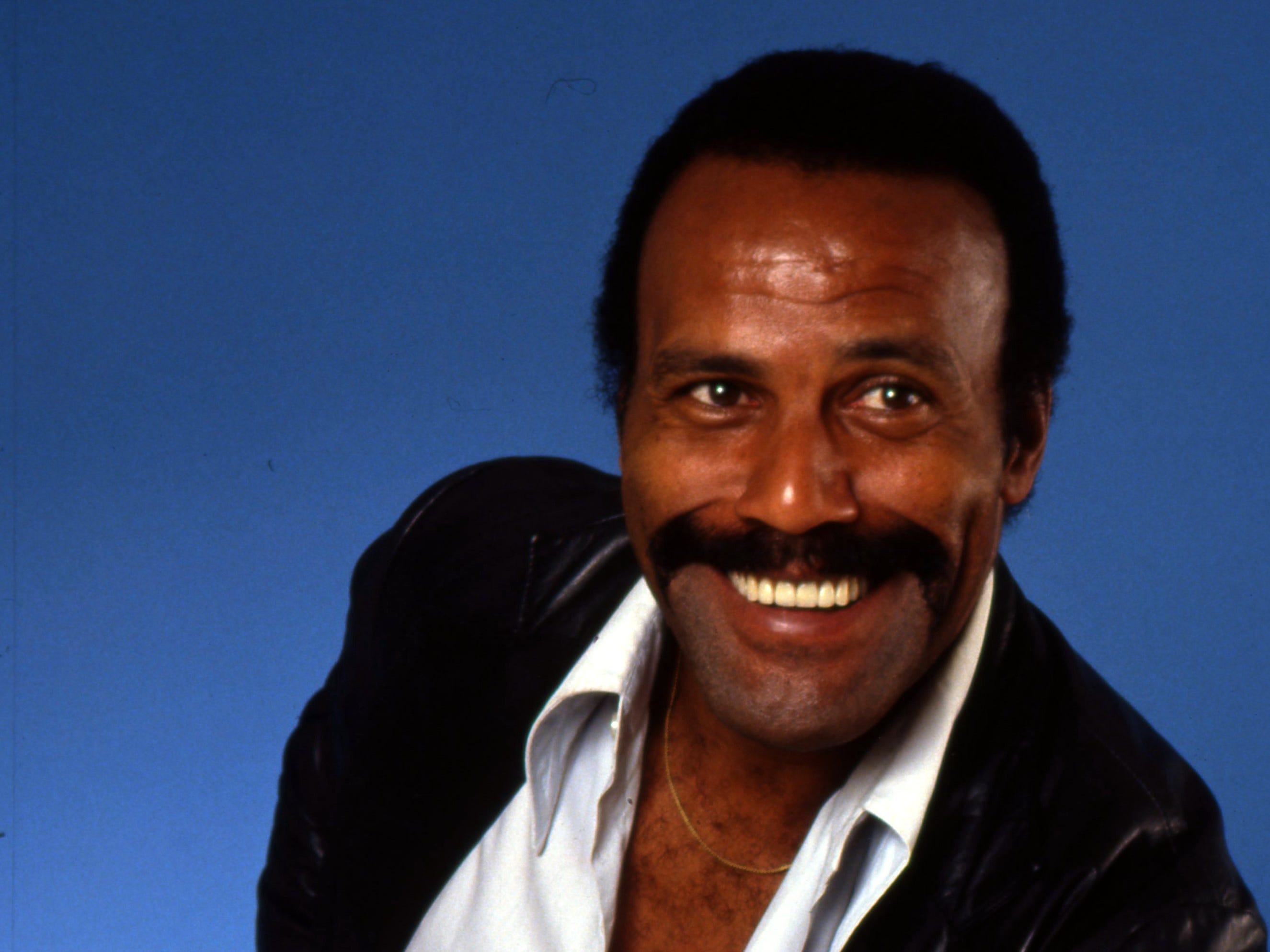 The AFL merged with the NFL in 1970, so Williamson played on some familiar teams – the Pittsburgh Steelers, the Oakland Raiders, and the Kansas City Chiefs – before he retired in 1967.

Williamson has appeared in all manner of film and TV shows, including an episode of the original “Star Trek” series, “From Dusk Till Dawn,” “Being Mary Jane,” “Black Caesar,” and the 2004 “Starsky & Hutch” film.

Ed Marinaro was a series regular on “Hill Street Blues” after leaving football in 1977. 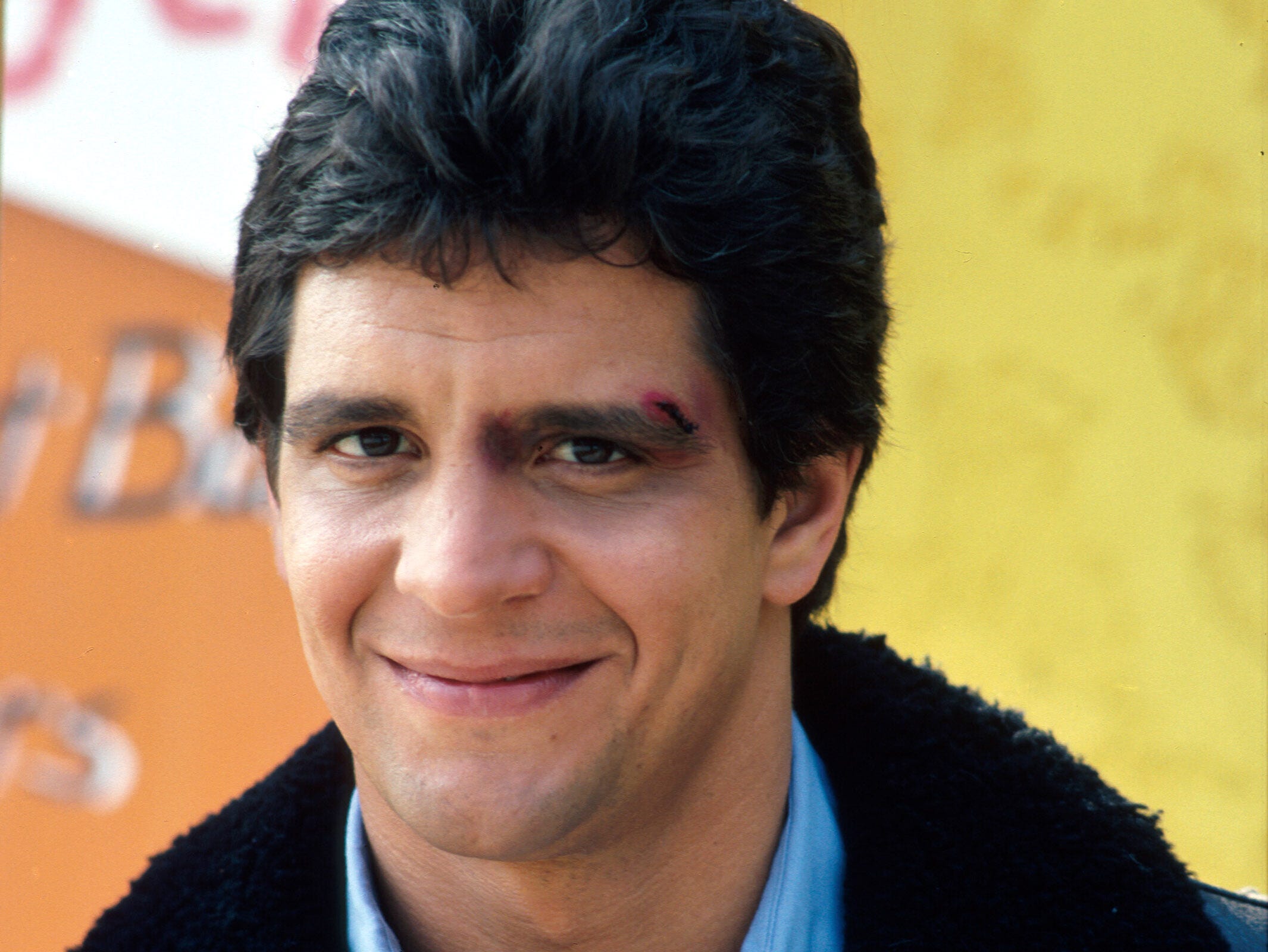 Marinaro was even the runner-up for the Heisman Trophy while he was in college, and he is generally thought of as one of the last great football players produced by the Ivy League (he attended Cornell).

Once he retired after five years in the NFL, Marinaro switched to acting, most famously as police officer Joe Coffey in “Hill Street Blues” from 1981 to 1986. More recently, he appeared in the Spike series “Blue Mountain State” as the head coach of the Mountain Goats. 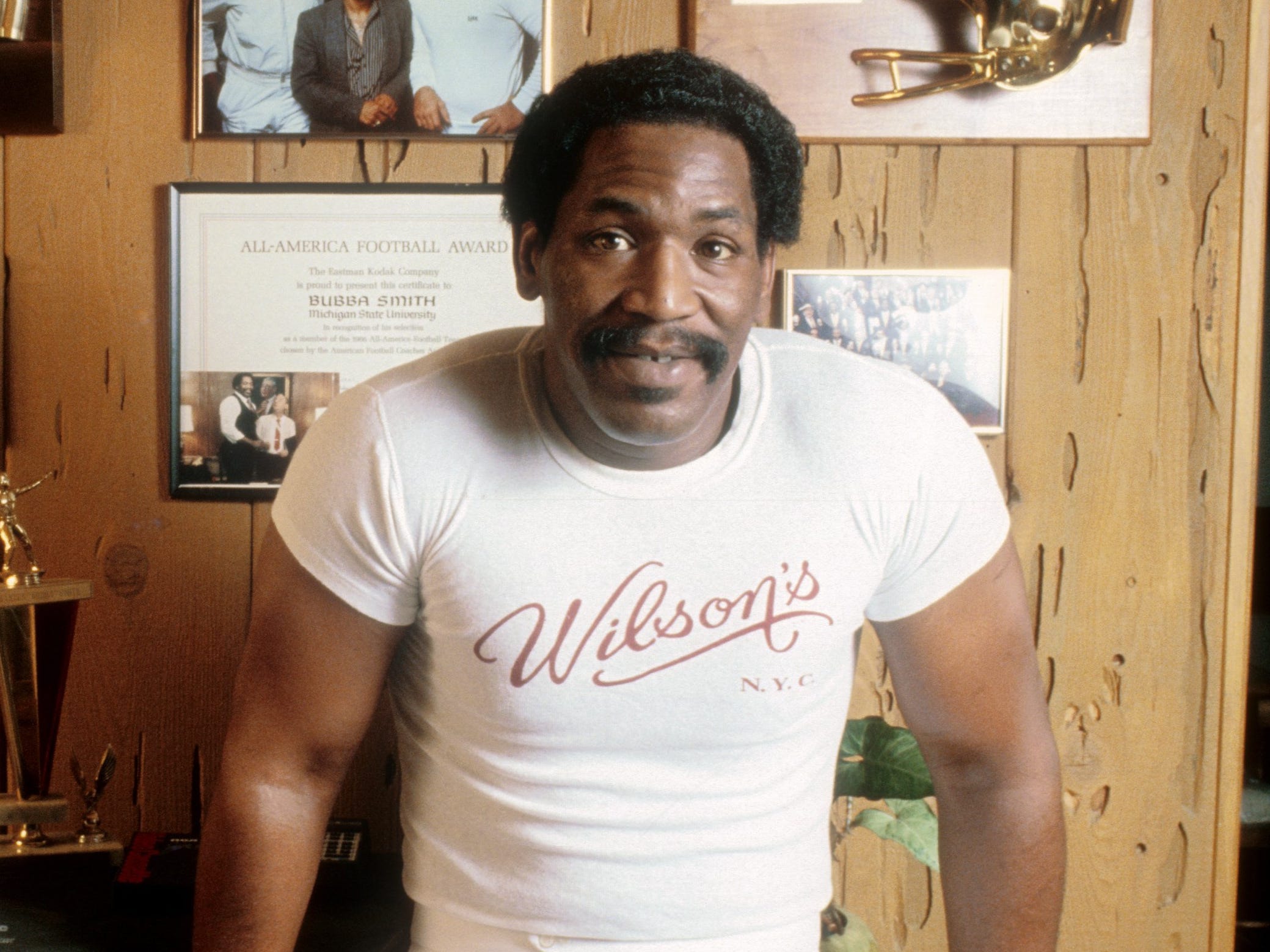 Smith, a Super Bowl champion, retired from football in 1976.He began acting after that, scoring his career-defining role as Moses Hightower in the first “Police Academy” movie in 1984. He’d reprise the role in the second, third, fourth, fifth, and sixth film in the series, through 1989. The only one he’d miss was 1994’s “Police Academy: Mission to Moscow.”