Floyd Mayweather once threatened to buy Diana Taurasi's team when she trash-talked him during a game, and it was 'the one time she's ever been silenced' 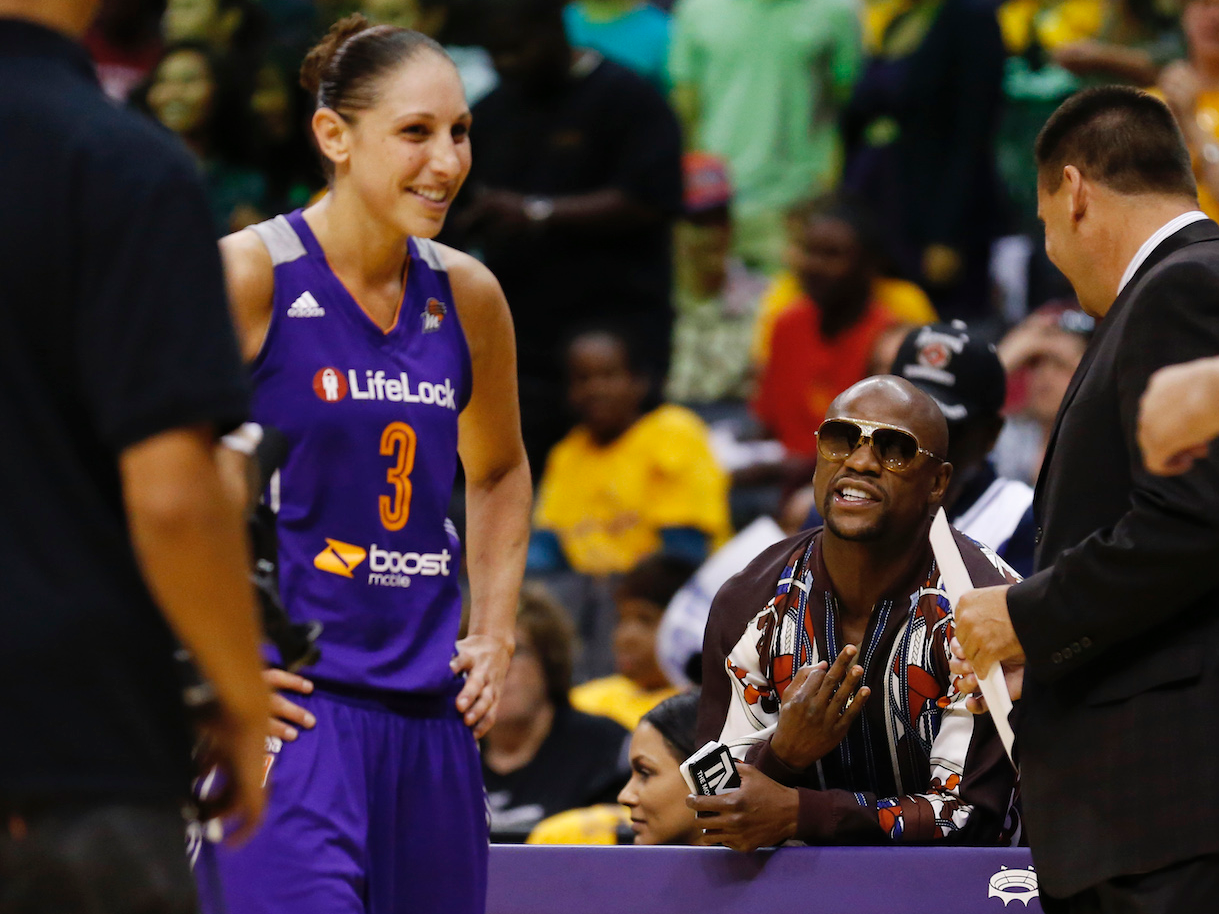 Phoenix Mercury legend Diana Taurasi is known as one of the fiercest trash talkers in the entire WNBA.

But according to fellow WNBA star Sue Bird, Taurasi met her match jawing off with a man on the sidelines years back – and it just so happened to be one Floyd Mayweather.

The four-time Olympic gold medalist and three-time WNBA champion with the Seattle Storm recounted what she dubbed “the Floyd Mayweather story” in an appearance on Zach Lowe’s “The Lowe Post” podcast with her girlfriend, USWNT star Megan Rapinoe.

Bird said Mayweather is a familiar face at Sparks home games at the Staples Centre in Los Angeles. One time, when Taurasi and the Mercury were visiting, the boxing great was sitting courtside with up-close access to the action. 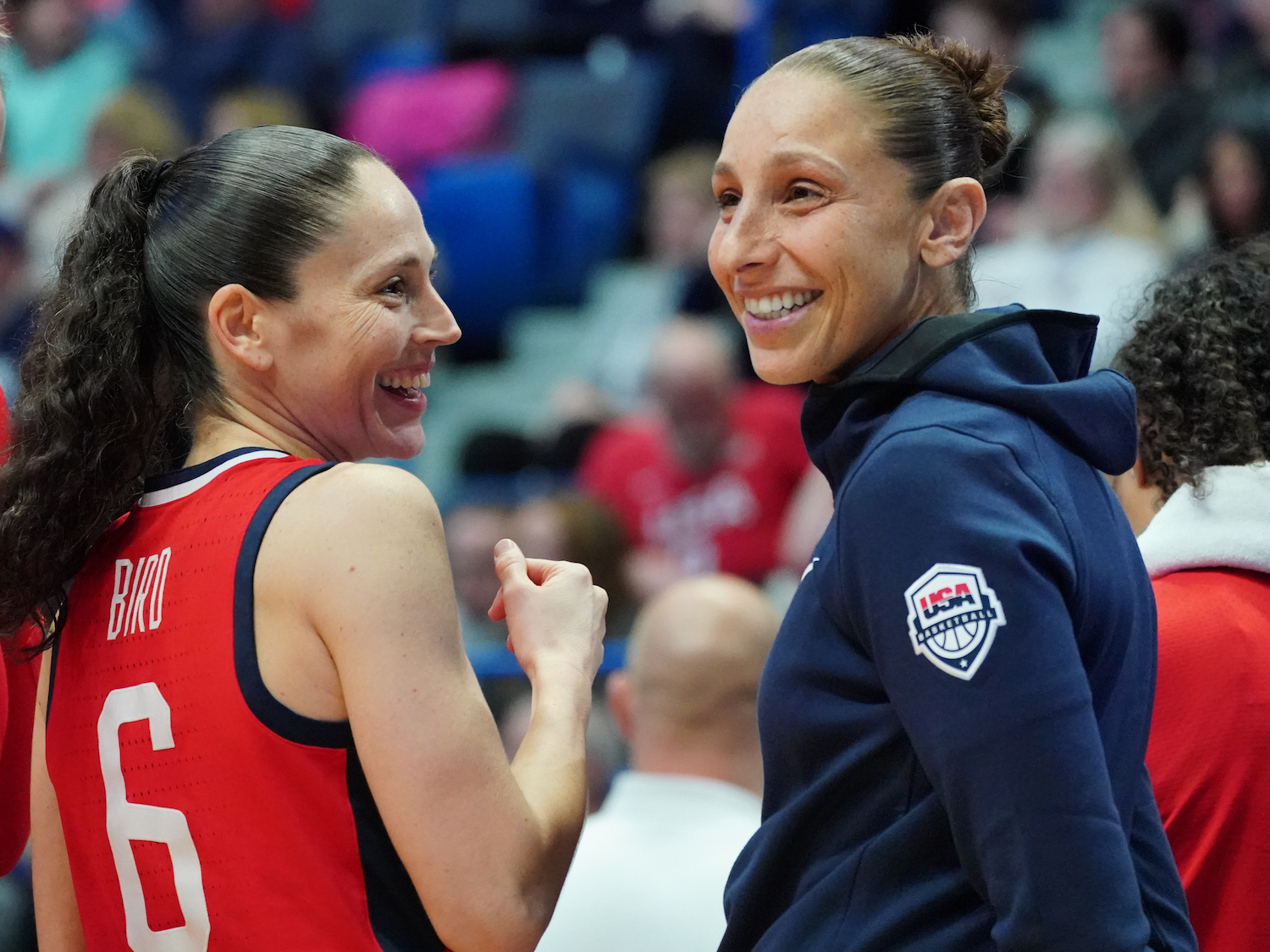 David Butler II-USA TODAY SportsSue Bird (left) and Diana Taurasi have long been teammates together for the USA basketball.

“At LA Sparks games, they actually have seats where they’re at the table,” Bird said. “[Mayweather is] literally at the table next to the Phoenix Mercury bench.”

As the WNBA all-time leading scorer checked in and out of the game and ran past his seat throughout play, Mayweather began heckling her.

“I think it started out somewhat friendly,” Bird recalled. “Like ‘Hey DT, blah blah blah blah’ and you know Diana, not gonna back down, is jawing back to Floyd Mayweather. I don’t know what the actual trash talk was at that point, but it was a lot of jawing back and forth. She’s playing, coming out of the game, talking, talking.”

Taurasi – whom the late Kobe Bryant dubbed “White Mamba” for her killer mentality and clutch gene – is notorious for her relentless trash talking. She even found a way to get under Mayweather’s skin while in the heat of the game.

“At one point, I don’t know what she said, but she said something that pissed him off,” Bird said. “I’ll find out what it was.”

The Money Team founder responded by threatening to buy Taurasi’s team and rename it after his favourite WNBA franchise – the team the nine-time WNBA All-Star happened to be playing against in real-time.

“He goes ‘You know what, D? I’m gonna buy the Mercury, and I’m gonna change the name to the Sparks,'” Bird said. “And I was like, damn, the ultimate shutdown… It was basically like, ‘I’m gonna own you.'” 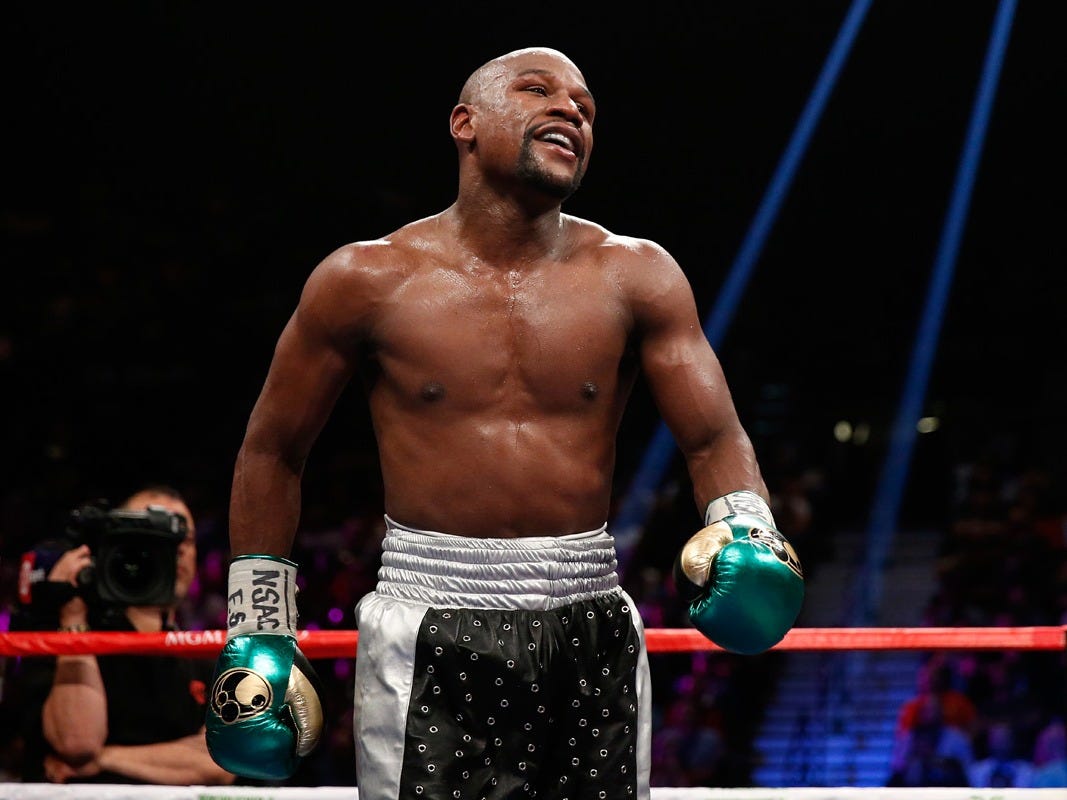 Ezra Shaw/GettyFloyd Mayweather in the ring.

“She had no comeback!” she added. “It’s the one time she’s ever been silenced.”

Lowe also reflected on Taurasi’s infamous smack-talking abilities during the podcast, likening arguably the greatest WNBA player in the league’s history – whom he called “one of the all-time great trash talkers” – with NBA bruiser Rasheed Wallace.

“Somebody in the league once told me WNBA officials literally had to go to Diana and say ‘You can’t say these things to the referees,'” Lowe said. “When it’s quiet, the people in the front row can hear you, and the language that you’re using is worse than Rasheed Wallace – it’s like, so bad.”

If the WNBA finds a way to salvage its 2020 season in the wake of the coronavirus pandemic, Taurasi will enter her 16th year in the league. She’s led the league in scoring in five of her previous 15 seasons in Phoenix and will look to lead her new-look Mercury to a fourth WNBA championship.

The 2020 WNBA season was initially scheduled to tip-off on May 15, but an April 3 statement from league commissioner Cathy Engelbert announced that the WNBA training camps and start date would be postponed indefinitely. The WNBA Draft will still take place on April 17, albeit virtually.