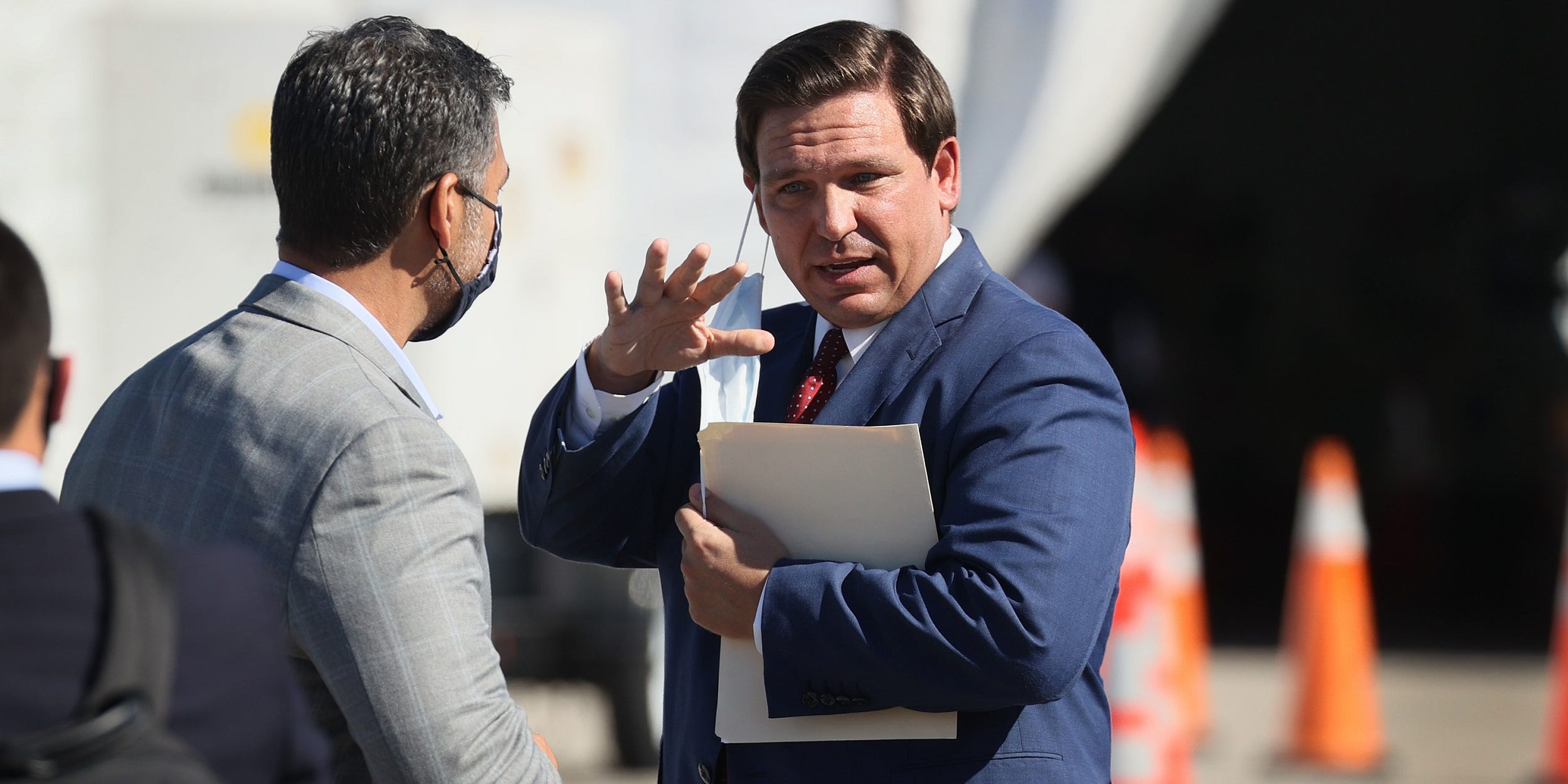 Joe Raedle/Getty ImagesFlorida Governor Ron DeSantis leaves after holding a press conference about the opening of a COVID-19 vaccination site at the Hard Rock Stadium on January 06, 2021 in Miami Gardens, Florida.

When Florida announced plans this week to distribute COVID-19 vaccines in Manatee County, critics â€” including local Republicans â€” were quick to point out that it would bypass the state’s lottery system and only serve some of the wealthiest, whitest, and most conservative residents.

Peppered with questions about the plan on Wednesday, Republican Gov. Ron DeSantis fired back, saying the county could take it or leave it.

“If Manatee County doesn’t like us doing this then we are totally fine with putting this in counties that want it and we’re totally happy to do that,” DeSantis said, according to the Sarasota Herald-Tribune.

Florida Democrats were quick to pounce.

“Threatening retribution and less vaccine access for communities that criticise the vaccine rollout for its problems is shameful and inhumane,” Florida Democratic Party Chair Manny Diaz said in a statement, accusing DeSantis of playing “favourites.”

But the divide over the state’s vaccine distribution is not strictly partisan.

On Tuesday, a fight broke out among Manatee County Commissioners regarding the governor’s plan, which is to hold a three-day clinic at the Lakewood Ranch planned community in southwest Florida, local CBS affiliate WTSP reported.

The governor himself reached out to the community’s developer to set up the clinic, according to the Tampa Bay Times. But Commissioner Vanessa Baugh said it was her idea to limit the distribution of 3,000 vaccines to residents of two particular zip codes â€” ones that have, relative to others in the county, been spared the worst of the pandemic.

Commissioner Misty Servia was one of several Republicans to push back. “It does compromise our system. It does pit people against each other,” she said. In particular, Servia said it contributes to the idea that Manatee County has “a racism problem,” noting that the zip codes chosen represent “the whitest demographic, the richest demographic in Manatee County, and putting them ahead of everyone else.”

The social justice of vaccine distribution is not a conversation limited to Florida. Although Black Americans account for 12.2% of all coronavirus cases, and 14.9% of all deaths, just 6.2% have received a dose of a COVID-19 vaccine, according to data from the US Centres for Disease Control and Prevention.