Florida police are setting up highway checkpoints to enforce the state's coronavirus quarantine. Offenders could be jailed for 60 days. 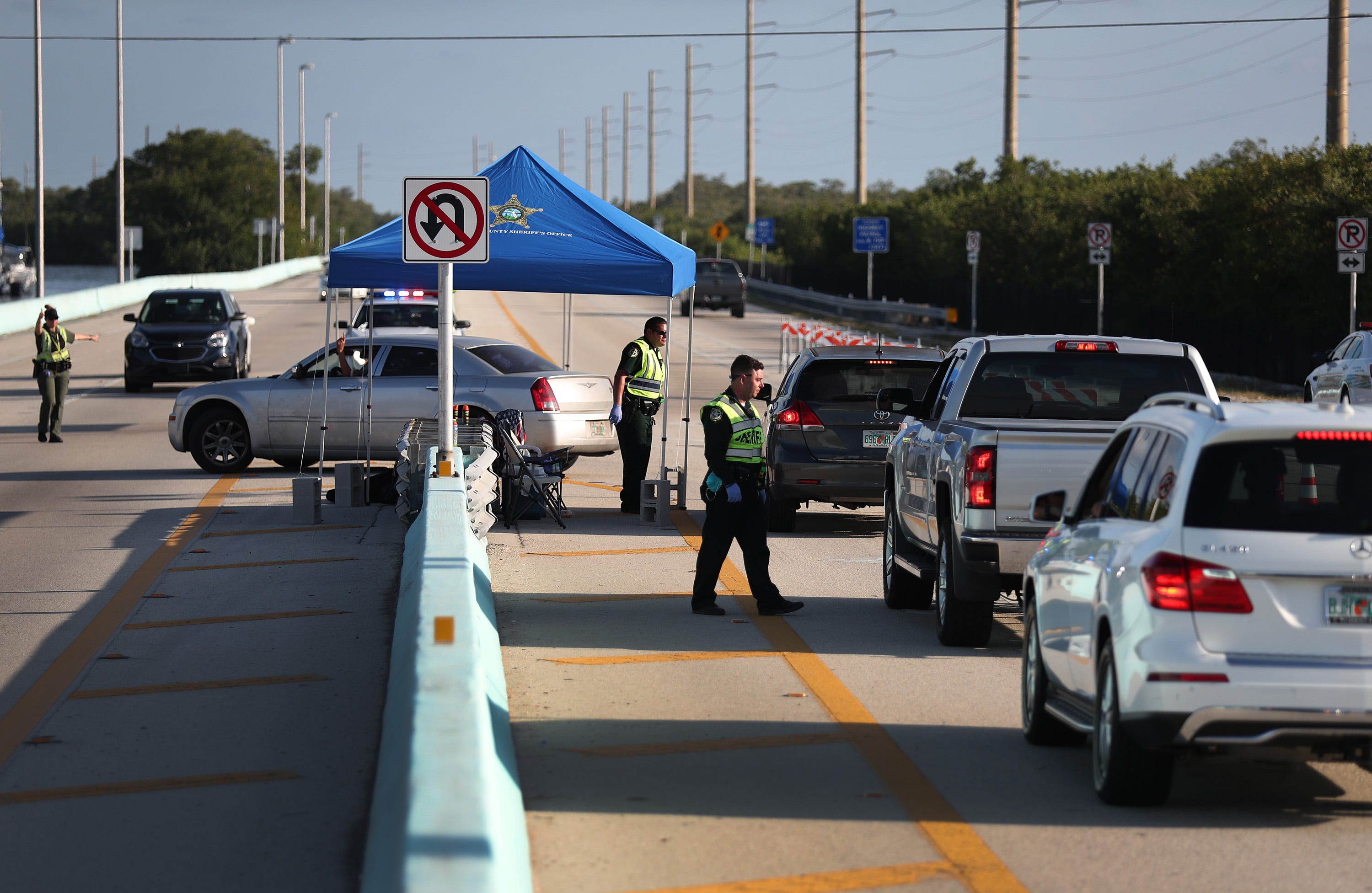 Joe Raedle/Getty ImagesMonroe County Sheriff deputies man a checkpoint on U.S. 1 leading into the Florida Keys on March 27, 2020 in Florida City, Florida. Monroe County administrators made the decision to prohibit tourists and only allow property owners and people who show they legitimately work in the Keys to pass through the roadblocks in an effort to stop the spread of COVID-19.

Drivers entering Florida from neighbouring states are being funneled through interstate checkpoints as authorities seek to crack down on the spread of the coronavirus, the state’s department of transportation said.

All travellers are asked a series of questions, according to the local CBS News affiliate KENS, with those arriving from places like New York, New Jersey, Connecticut, and Louisiana forced to give contact information during their required 14-day self-quarantine.

In some cases, drivers posted photos of videos of massive traffic jams soon after the checkpoints were enacted Sunday as cars wait to enter the state. There are currently no federal warnings against domestic travel except for New York, New Jersey, and Connecticut residents who aren’t part of “critical infrastructure” activities.

Wow. I-95 south is stopped at the FL state line as the new checkpoint screening begins. I didn’t record past a minute but it keeps going into GA. @FCN2go pic.twitter.com/2D8u2wUCpD

Individuals arriving from the New York City area or Louisiana are subject to a $US500 fine or 60 days in jail if they break the order to self-quarantine.

“You’re having people be reckless and cause problems for other communities,” DeSantis said.

“I think people have realised that the epicentre of this thing has shifted,” DeSantis said of the virus. “Now the epicentre worldwide really is New York City. We’re really rooting for New York to get through it,” he continued. “But what’s happened is – and it’s a problem for Florida – once the shelter-in-place was issued, people started fleeing the city.”

Florida has yet to issue a statewide shelter-in-place order, but many local cities and counties are taking it upon themselves to institute lockdowns as the number of US cases continues to grow.

Mayor Francis Suarez of Miami, who was the first person in Miami-Dade County to test positive for the novel coronavirus, has urged DeSantis to issue such an order.

Suarez told Business Insider that it’s “hard to second-guess” DeSantis’ reluctance to follow other states in instituting a shelter-in-place order given that about a third of the state’s counties don’t have any confirmed COVID-19 cases, “but I personally would.”

As of Monday morning, there were 143,532 confirmed COVID-19 cases in the US, easily the largest in the world. In Florida, at least 50 people have died, according to Johns Hopkins University.