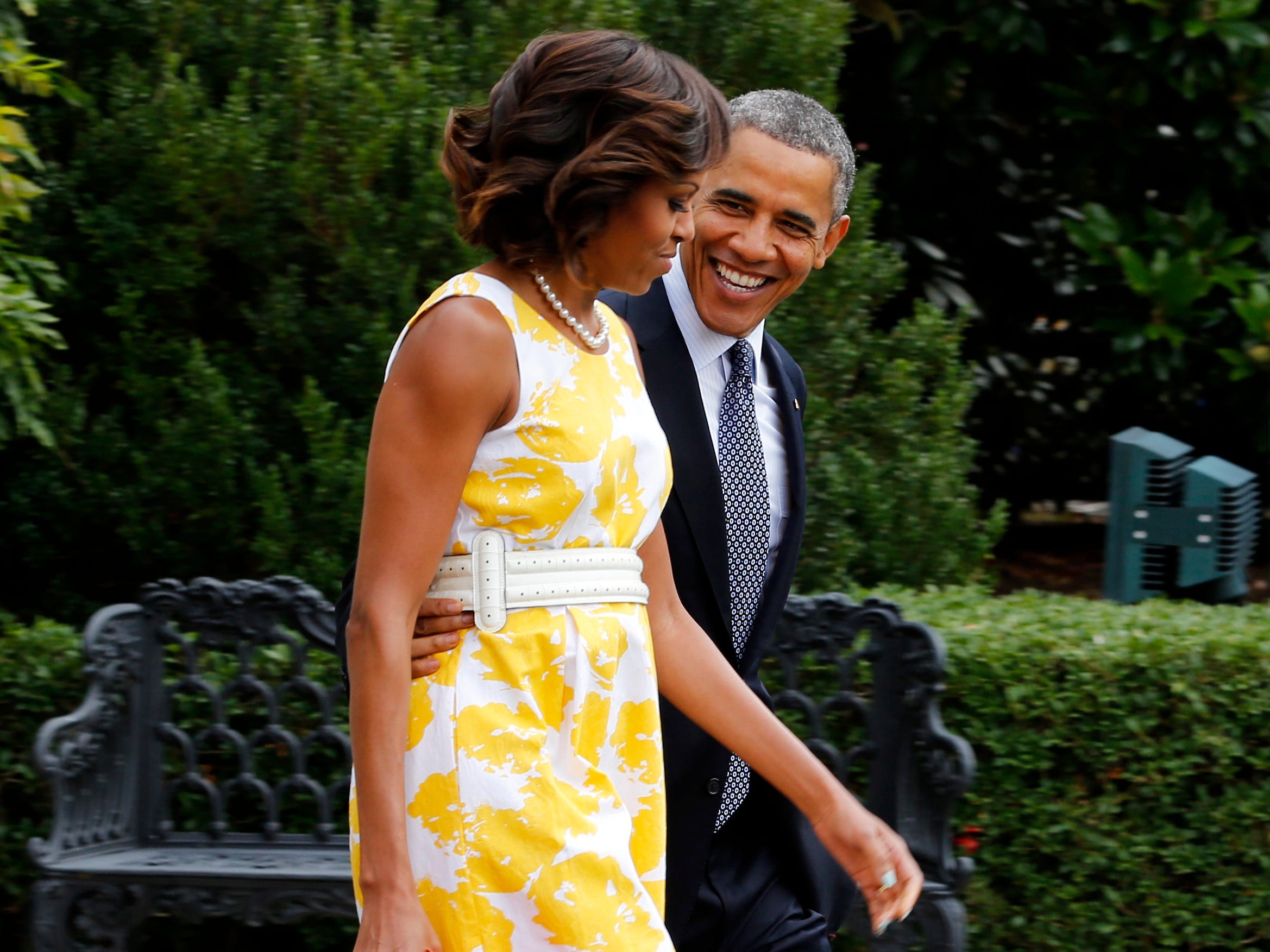 From Jackie Kennedy to Melania Trump, first ladies have long been lauded as fashion icons.

However, in recent years, first ladies have experimented with affordable looks from brands like J. Crew, Gap, White House Black Market, J Brand, and even Target.

Here are 13 times US first ladies have worn affordable clothing. 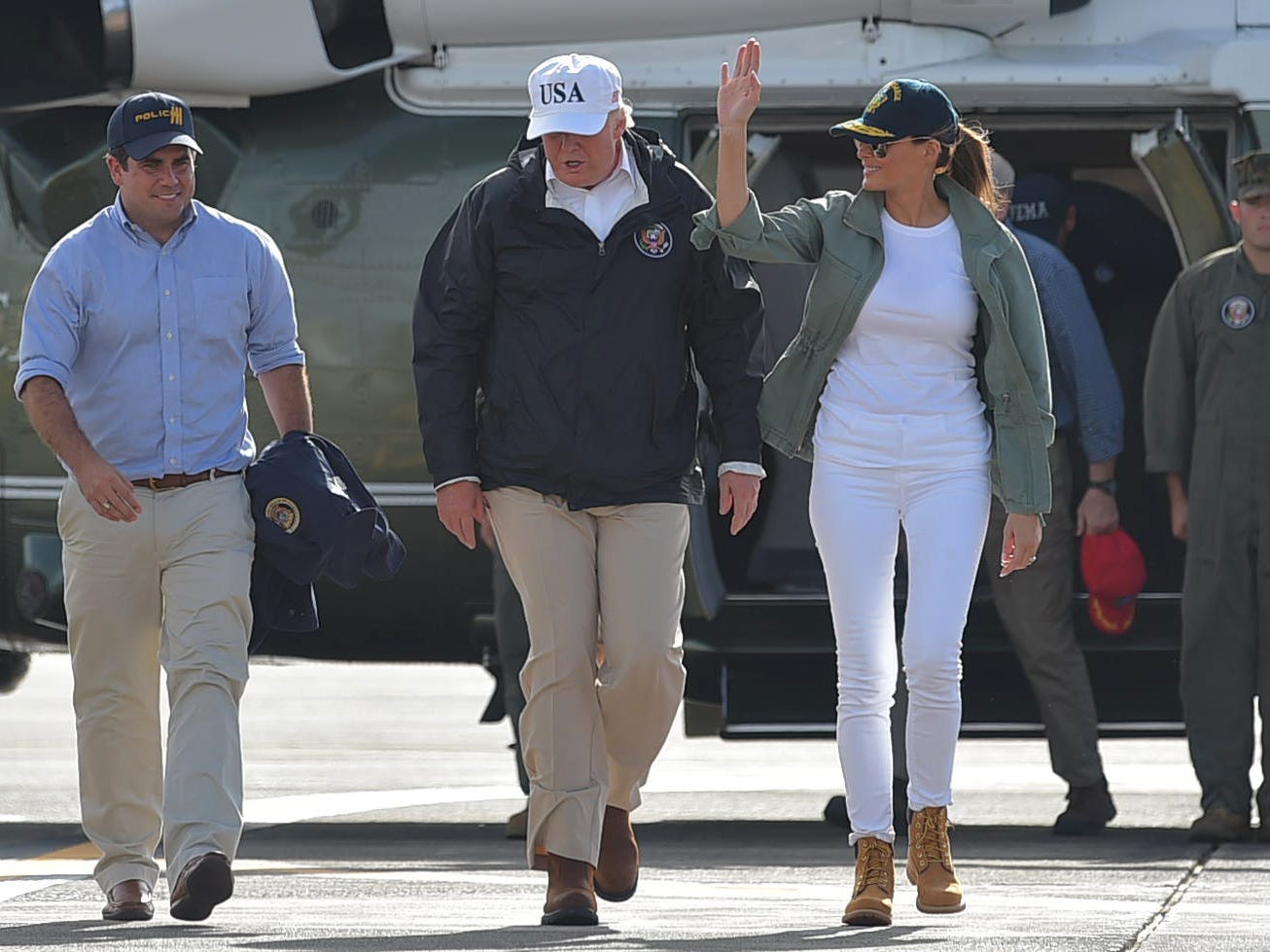 Before departing Puerto Rico in 2017, following meeting victims of the devastating Hurricane Maria, the first lady was seen wearing a pair of $US170 Timberland boots. 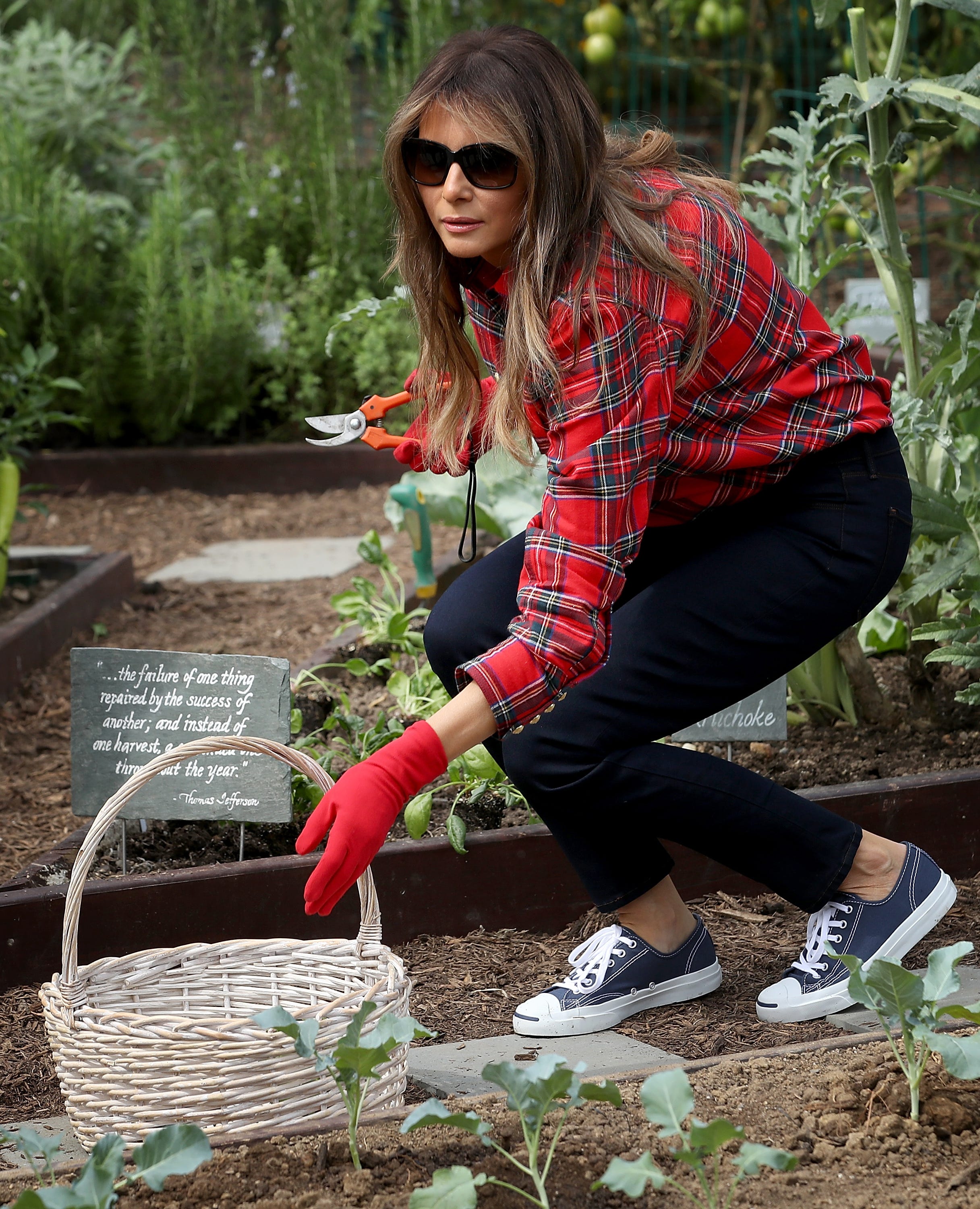 While hosting the Boys and Girls Club at the White House in 2017, Trump wore a navy pair of Converse sneakers – which typically cost around $US50 – to plant and harvest vegetables.

After returning to the White House from a weekend at presidential retreat Camp David in 2017, she was seen wearing an affordable top from J. Crew. 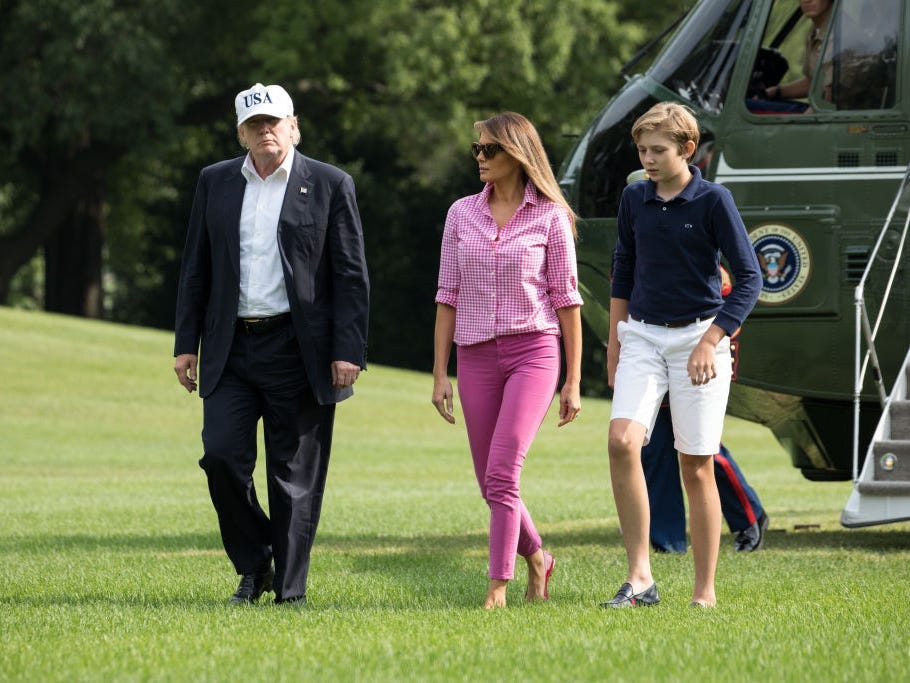 The pink gingham button-up shirt, which the first lady paired with casual pink pants, retailed for $US75.

After another weekend away, she was spotted wearing a pair of J Brand jeans. 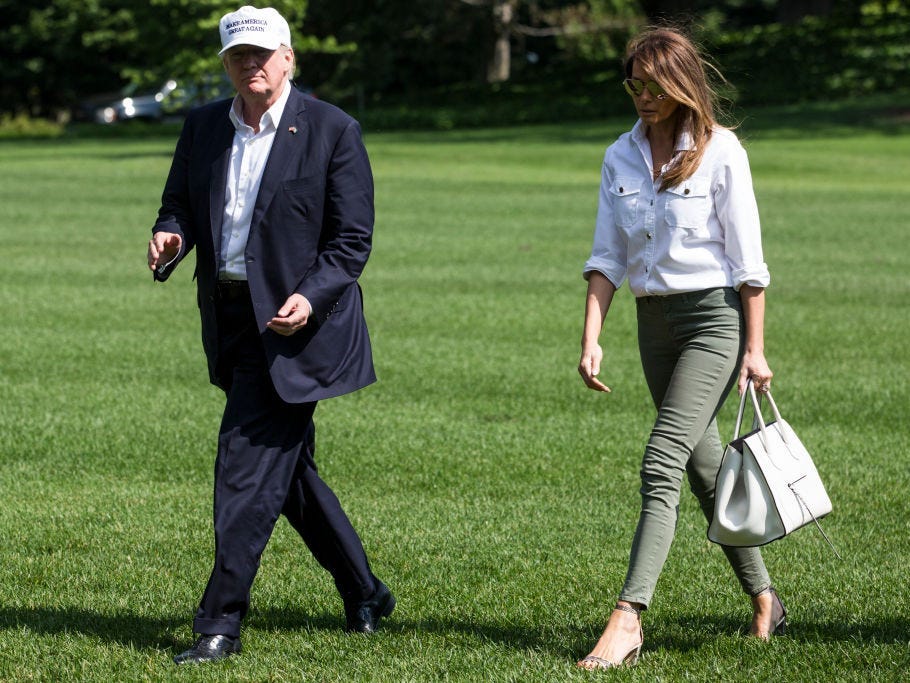 Zach Gibson/Getty ImagesThe Trumps cross the South Lawn after arriving at The White House on June 18, 2017.

The jeans are on the slightly pricier side at $US188.

Michelle Obama has never been a stranger to affordable fashion. During an appearance on “The View,” she wore a dress from White House Black Market. 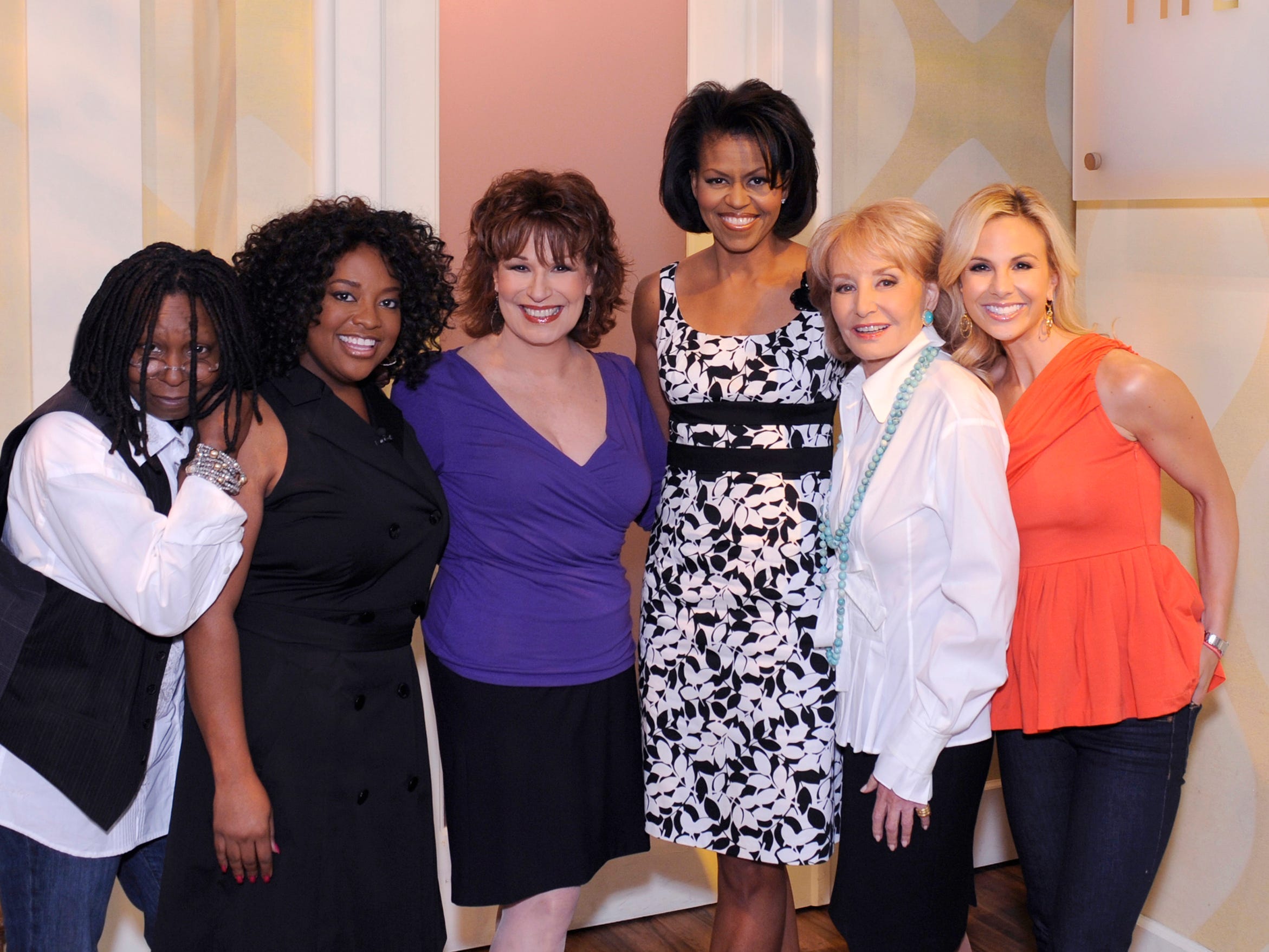 While campaigning for Barack Obama’s first term in 2008, Michelle Obama made an appearance on “The View” in a $US148 black-and-white printed dress. The dress seemingly sold out overnight and shot designer Donna Ricco to fame.

While attending the G-20 Summit in 2009, Obama paired J. Crew items together. 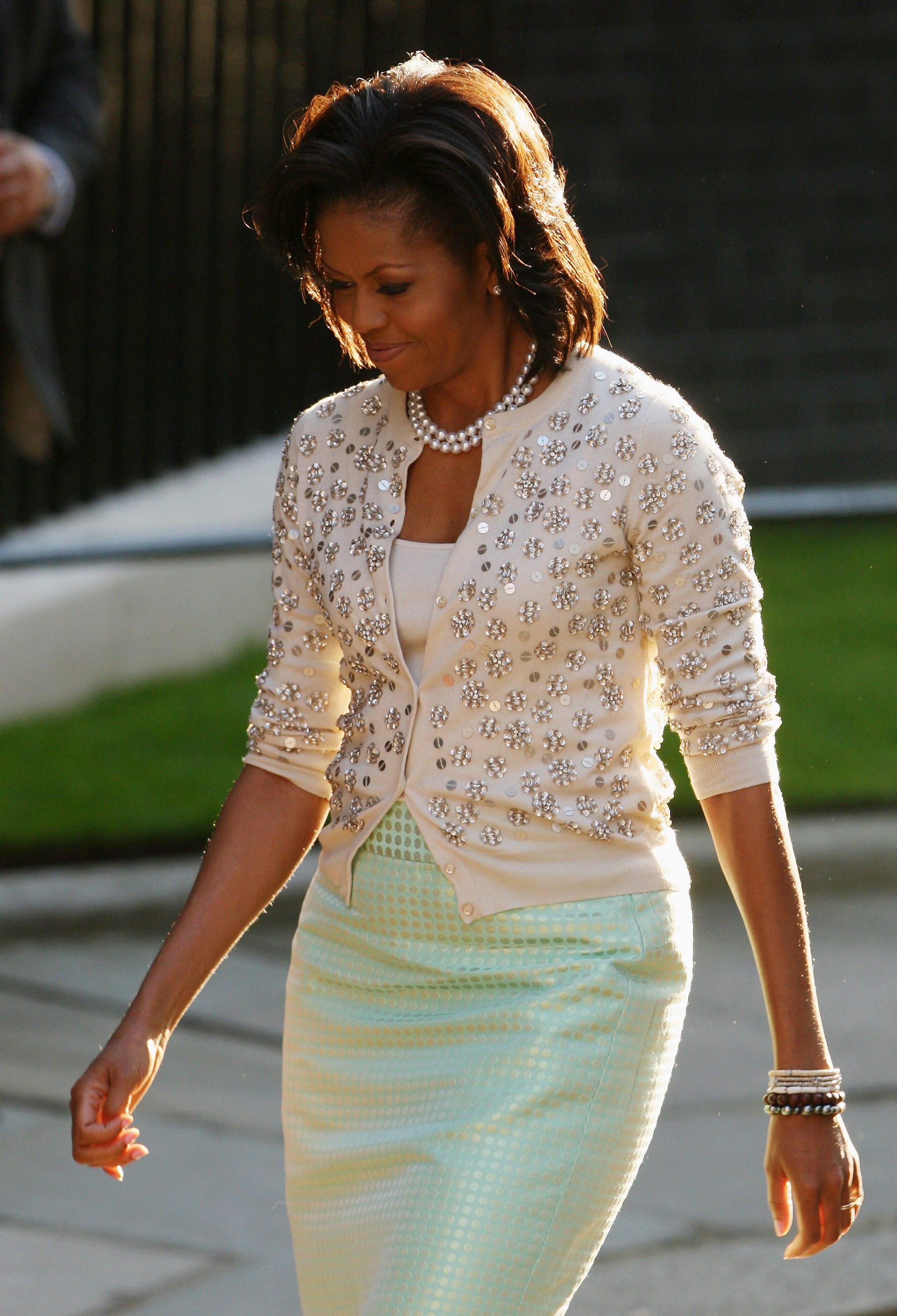 According to a previous article by Business Insider, the outfit came entirely from J. Crew, from the glitzy $US298 cardigan to the $US158 mint-green pencil skirt. Obama layered an $US18 tank top, the most affordable part of her outfit, under her cardigan.

While arriving in Arizona in 2009, Obama was photographed wearing an A-line dress from Target. 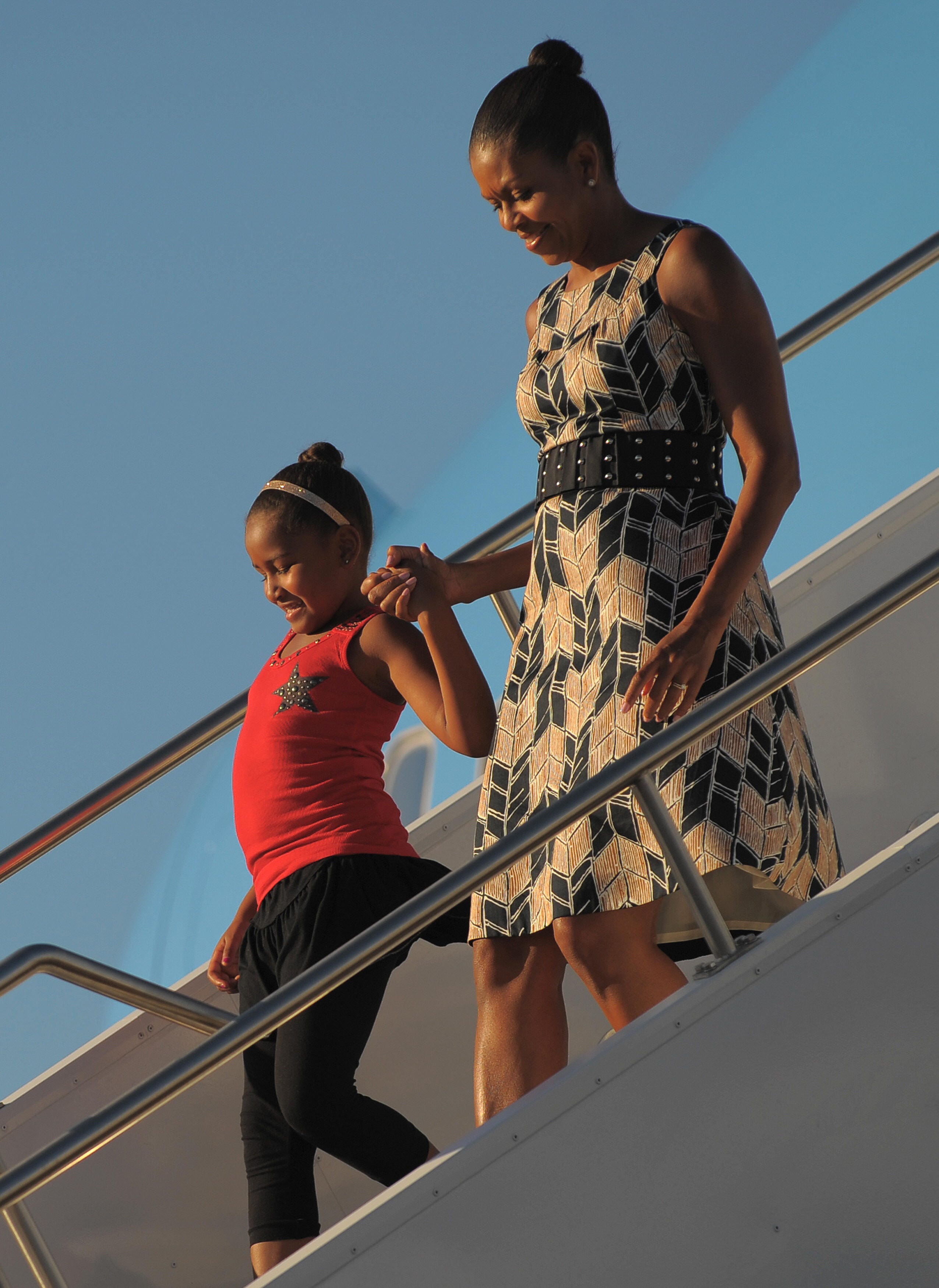 MANDEL NGAN/AFP/Getty ImagesMichelle Obama and daughter Sasha step off Air Force One after arriving in Phoenix, Arizona, on August 15, 2009.

The dress, from Target’s discontinued Merona line, retailed for just $US19.

The former first lady also wore a dress from Gap in 2011. 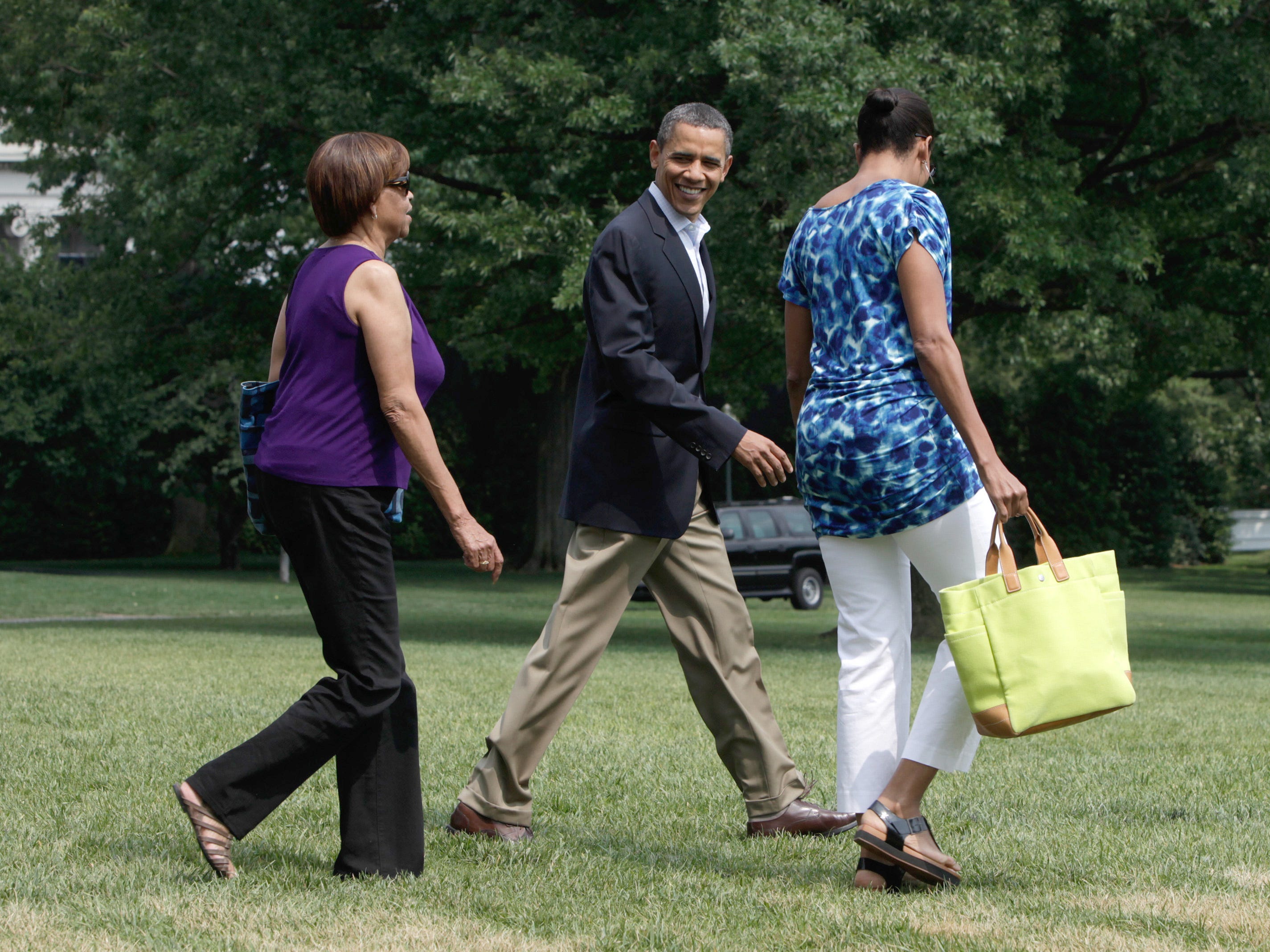 YURI GRIPAS/AFP/Getty ImagesMichelle and Barack Obama before their departure to Camp David in 2011.

The blue-and-white printed dress, which Obama wore as a tunic over a pair of white pants, cost just $US29.99.

That same year, Obama wore an affordable dress from H&M while appearing on the Today show. 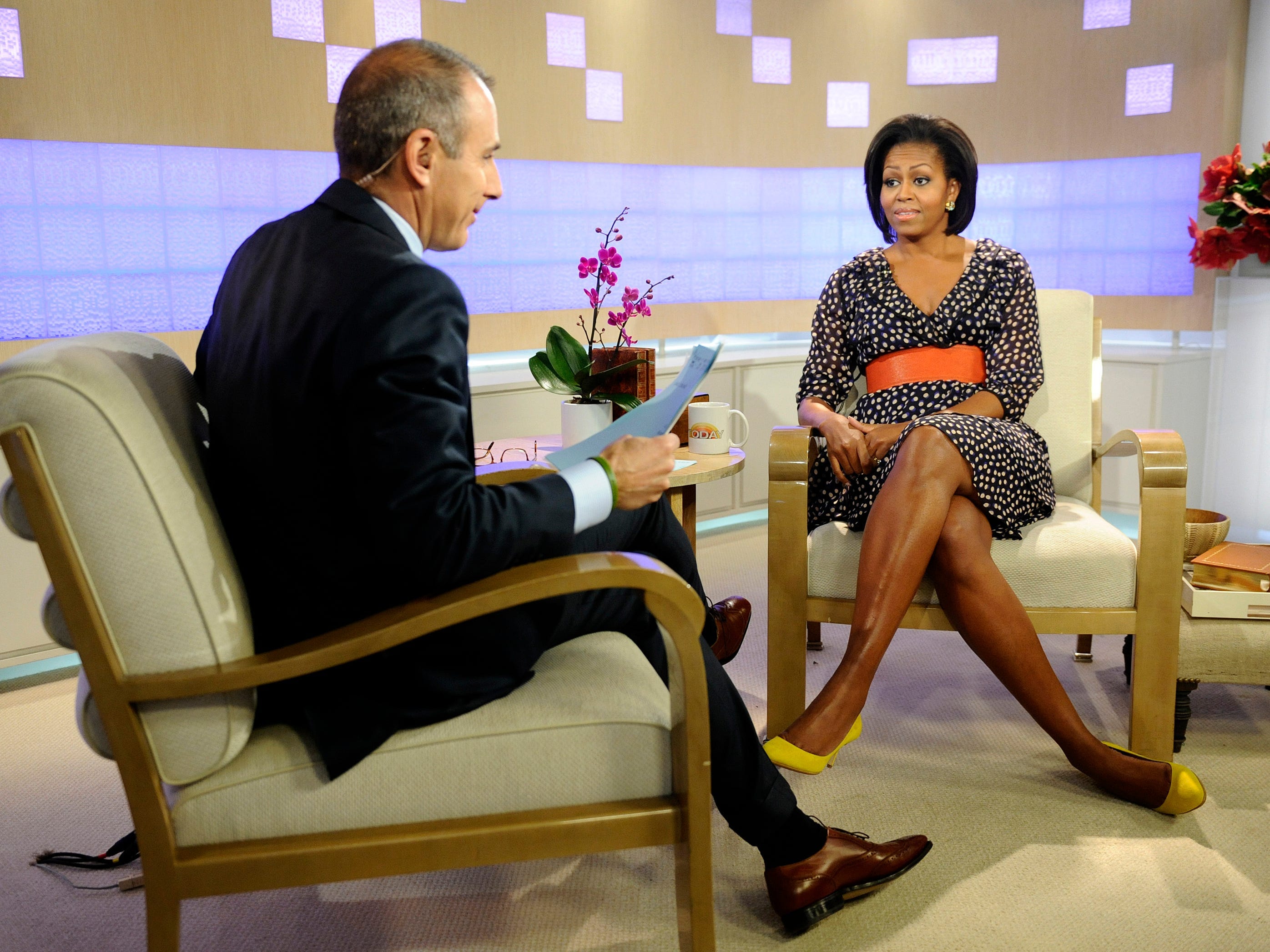 She altered the $US34.95 polka dot dress to include sleeves, according to InStyle.

Michelle Obama turned heads in an ASOS dress while campaigning in Iowa in 2012. 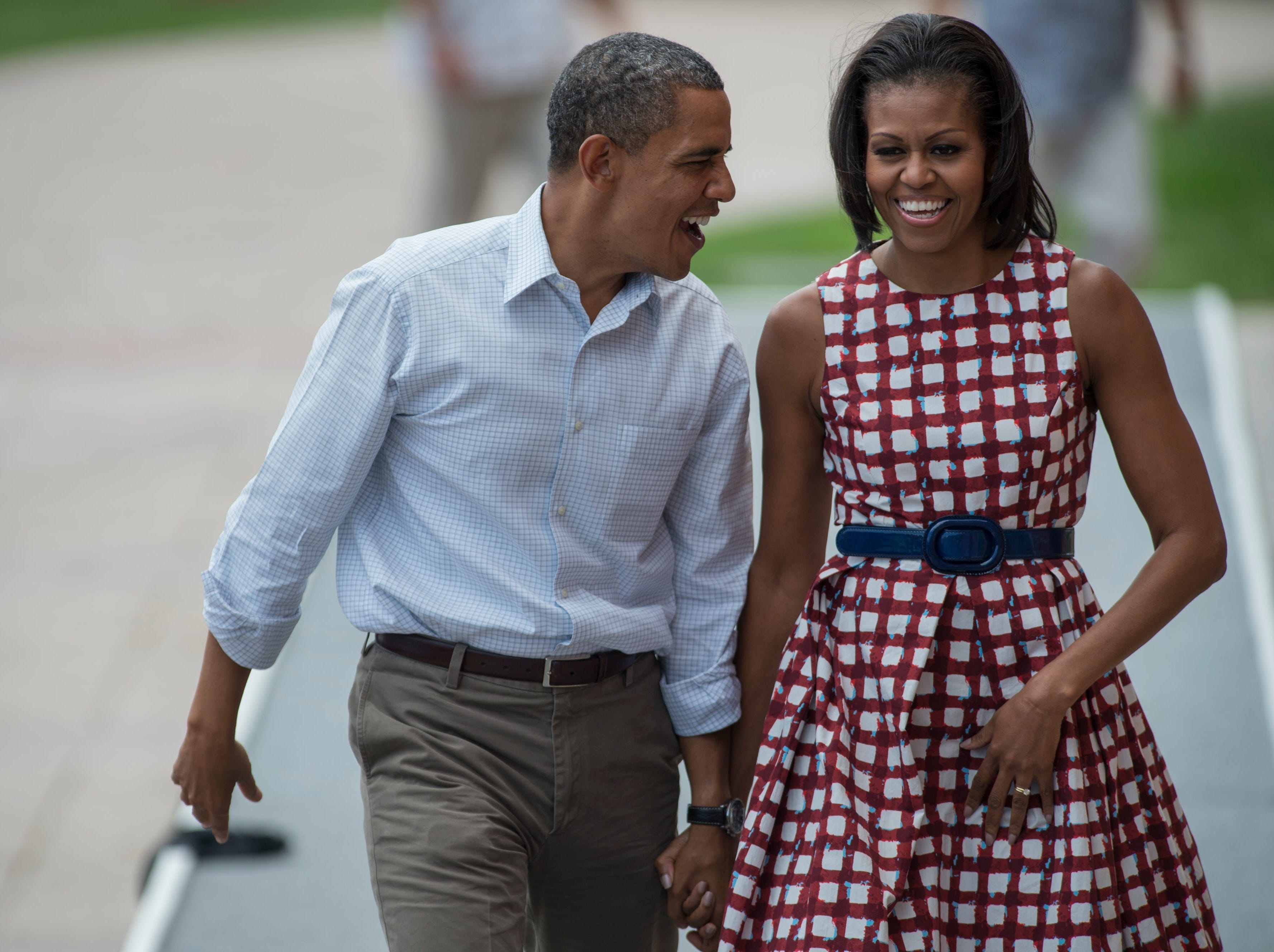 The fit-and-flare, ’50s-style dress originally retailed for $US93.34, according to Fashionista. Actress Jessica Alba later wore the same dress in 2014.

Michelle Obama wore a colourful floral dress from Talbots in 2013. 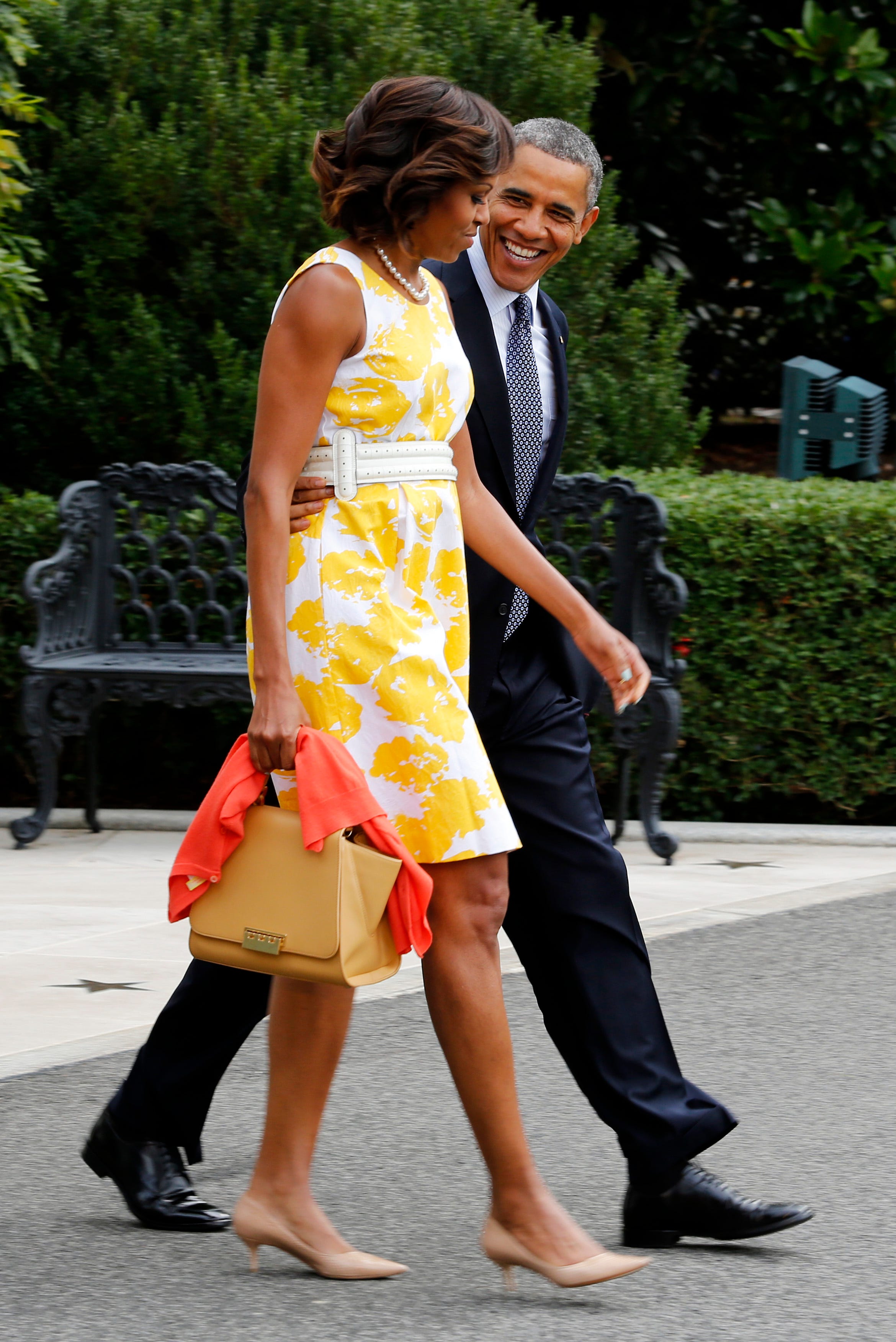 The former first lady was spotted wearing pieces from the brand throughout her husband’s presidency, but this dress stands out as one of her most affordable looks. The yellow printed dress retailed for $US55 when Obama was spotted wearing it, down from its original price of $US169.

Barbara Bush wore a strand of fake pearls and a pair of $US29 shoes to George H.W. Bush’s inaugural ball in 1989. 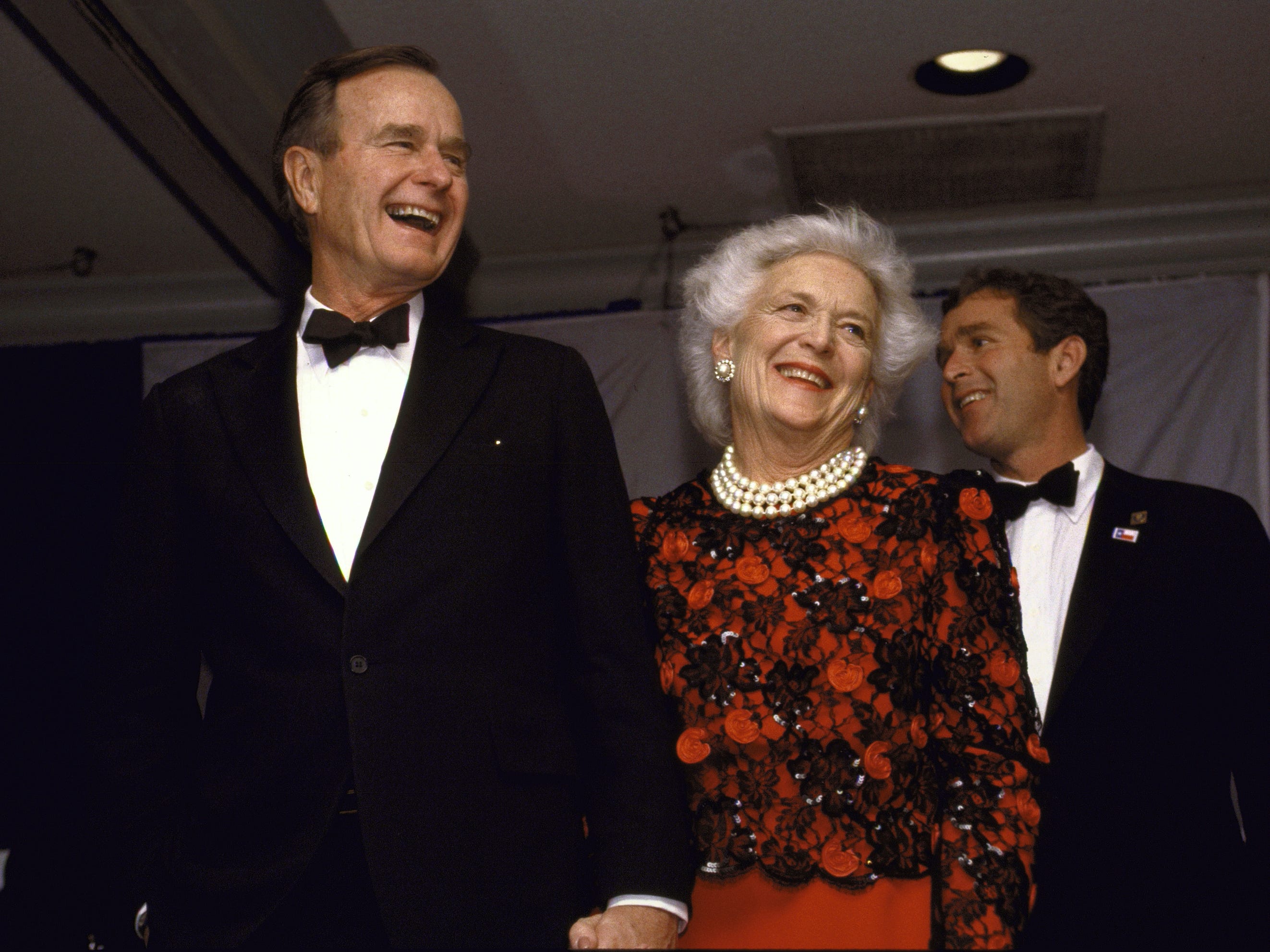 According to the New York Times, Bush wore the necklace many times throughout her life in the public eye – so much so that the pearls became her signature. Designed by jeweller Kenneth Jay Lane specifically for Barbara Bush, they cost just $US150 to this day.

Betty Ford was a fan of designer Albert Capraro, whose prices were affordable. 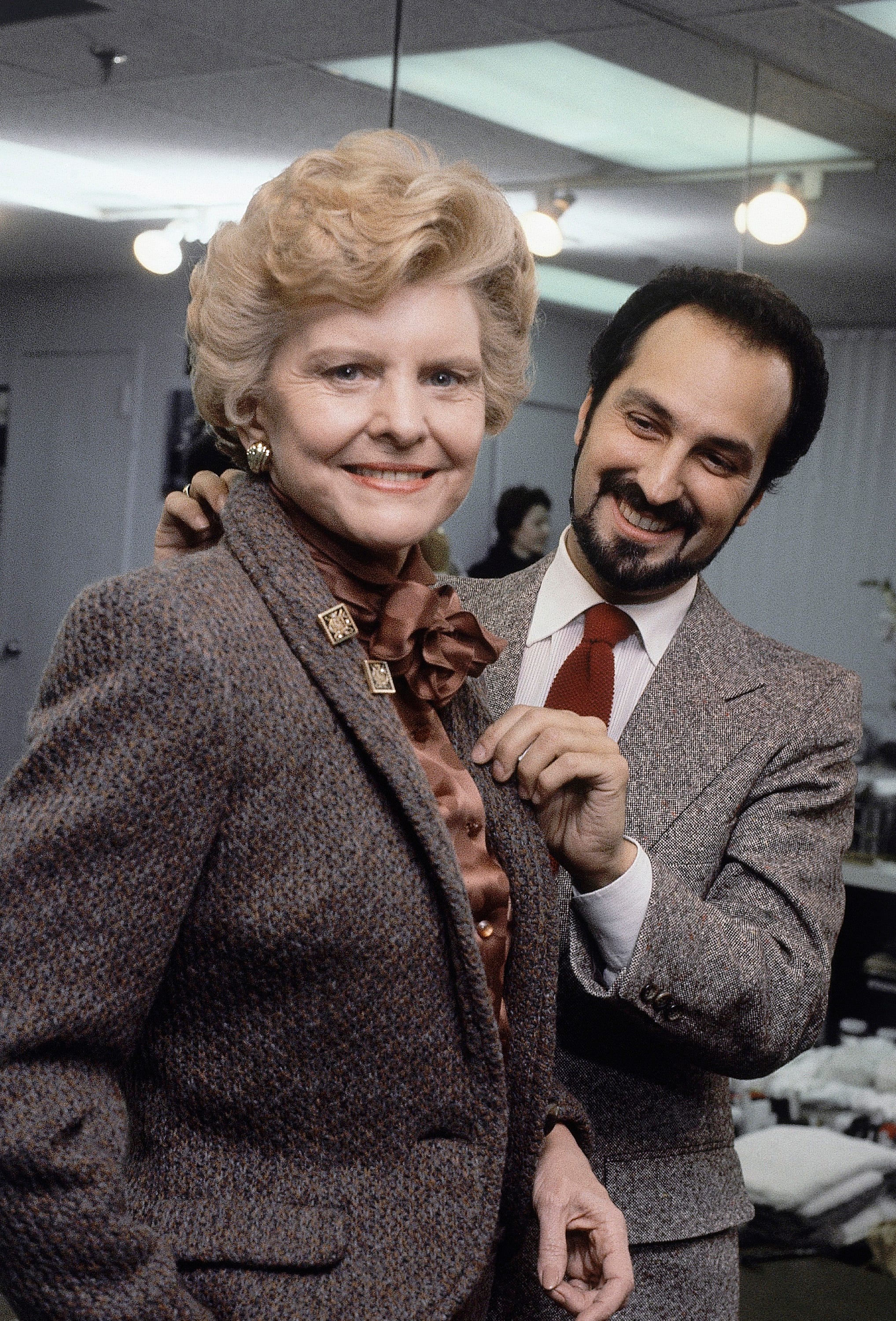 AP Photo/Dave PickoffBetty Ford and designer Albert Capraro outfits her for her new spring wardrobe in 1981.

After spotting designs by then-31-year-old Albert Capraro in a Washington newspaper, the first lady was impressed by his commitment to using American-made fabrics and his affordable price ranges. According to People, Capraro charged just $US80 for day dresses and under $US200 for evening gowns in 1975.

Ford asked Capraro to visit her to “sound out her spring wardrobe,” and the pair continued working together throughout her time in the White House.