I spent a week following the 7 steps to Finnish happiness, and found drinking alone plus an ice-water plunge actually made me more relaxed 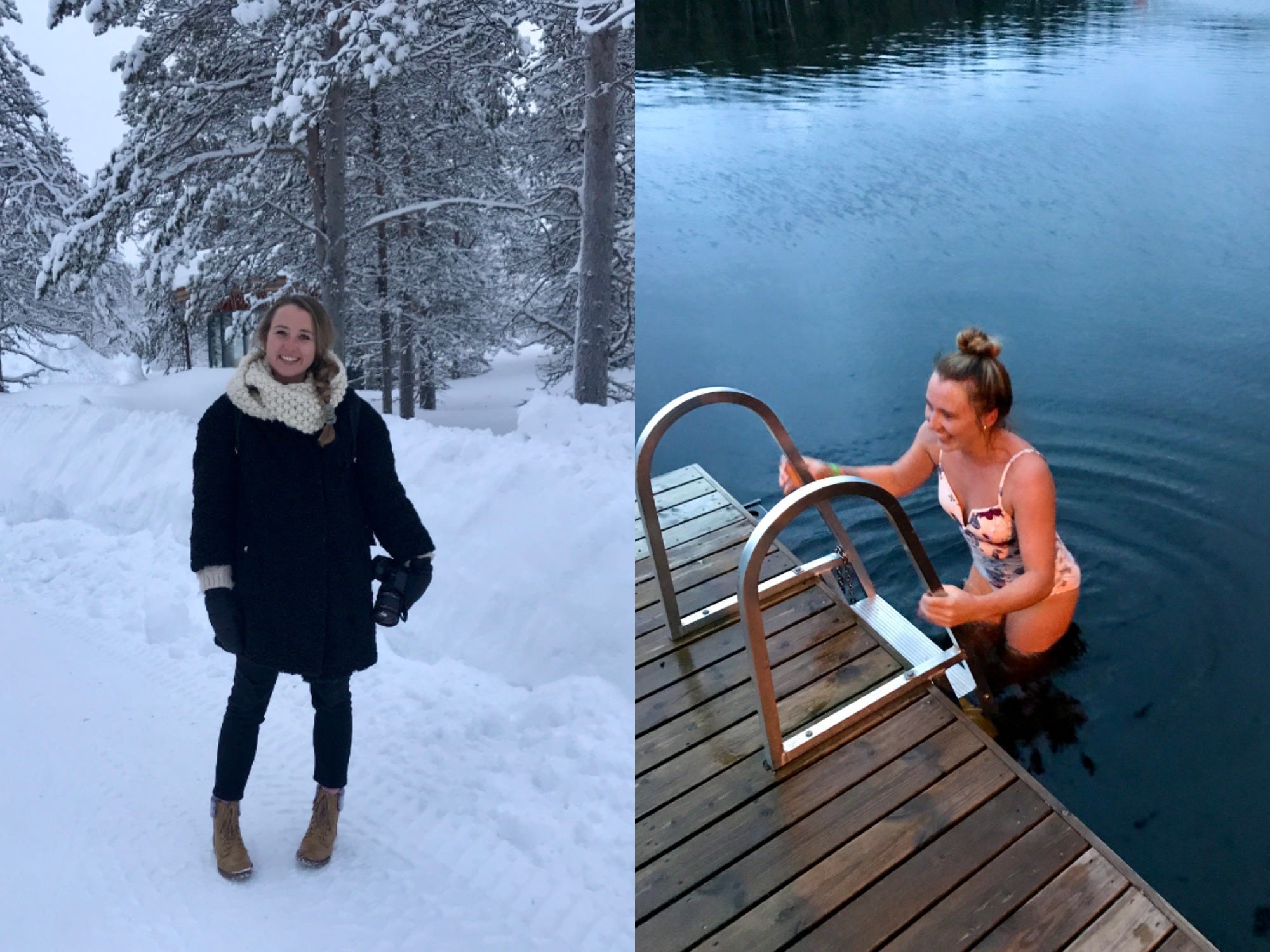 Rachel Hosie/InsiderWalking in the woods and plunging into icy water are essential components of Finnish happiness.

In March 2020, Finland was named the happiest country in the world for the third year running in the annual World Happiness Report.

As a result, many people have been trying to figure out what exactly it is that the Finns get so right, and how the rest of us can recreate it.

On a recent trip to Finland, I attempted to get to the bottom of the matter by ‘renting’ a Finn as a happiness guide for the day and also asking 10 Finns on the street what their secret to happiness is.

But I also decided it would be wise to follow Visit Finland’s official six-step program “to be happy like a Finn,” which goes as follows:

Some more research into Finnish happiness led me to believe the official guide had missed off one essential part of national culture: Kalsarikänni, which means “drinking at home, alone, in your underwear,” according to the BBC. So I figured it would be prudent to add that to my list as a seventh step.

Over the course of my week in Finland, I attempted to tick off all these steps, and despite failing to see the northern lights or pick berries of my own, I was amazed that living like a Finn really did make me feel happier.

Ultimately, the lifestyle made me feel calmer and more at peace, which in turn led to a delightful feeling of contentedness. “There is nothing more Finnish than sauna, it is such a big part of Finnish culture it can’t be compared to anything else,” the guide says.

“For Finns, it is a must at regular intervals, and if they go too long without sauna, they will start feeling incomplete. Needless to say, sauna makes us happy.”

I visited various saunas over my week in Finland, including a lakeside smoke sauna, a sauna in a snow-covered wooden chalet in Lapland, and a private sauna in a Helsinki resident’s home. 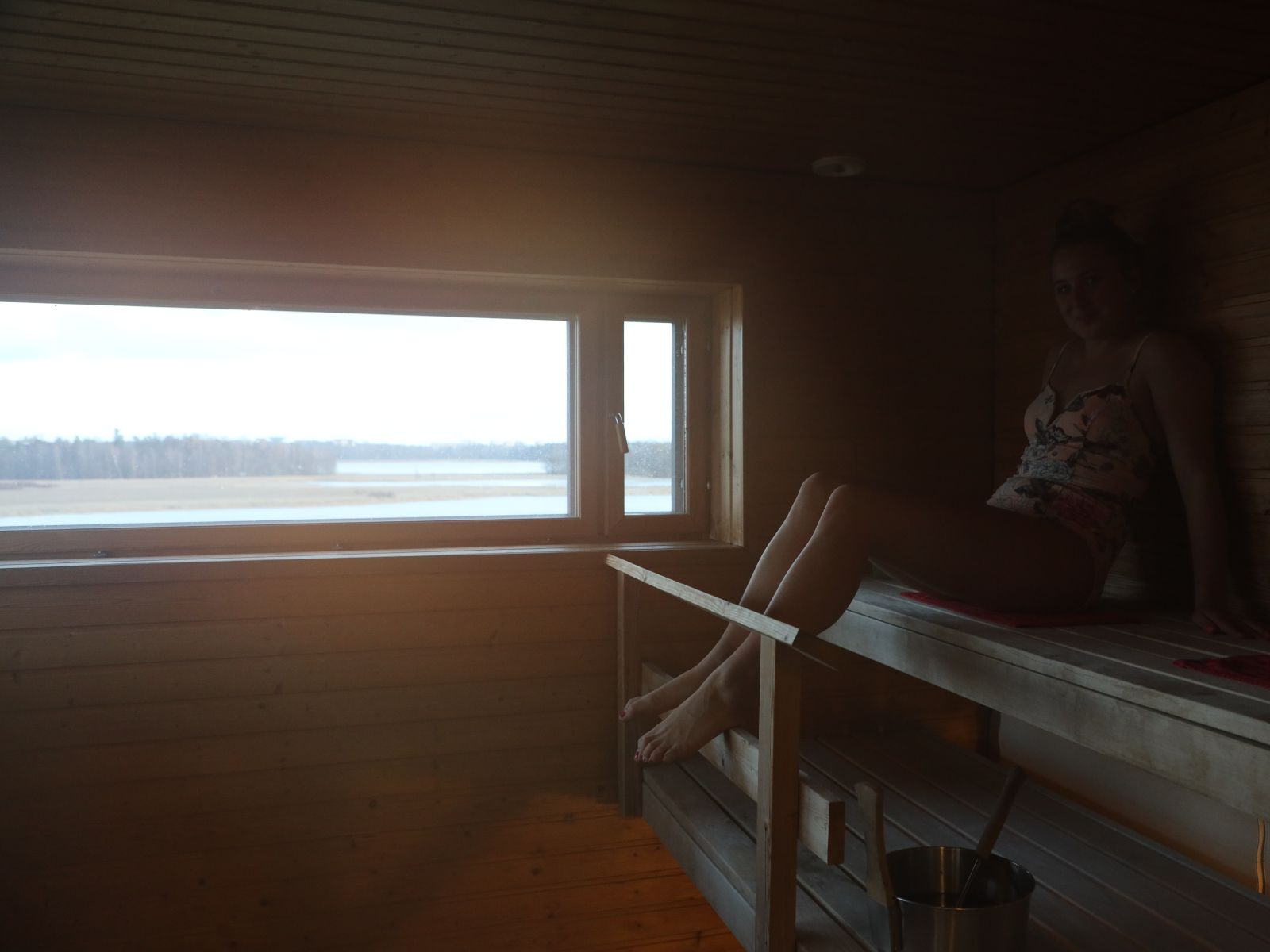 It was incredible to me how seriously Finns took their sauna time, but I also totally understood it. Sweating it out feels good.

Now more than ever, it feels precious to be forced to be separated from all technology too, and each time I sauna’d, I felt my body decompress and my mind destress.

Step 2: Walk in the forest. 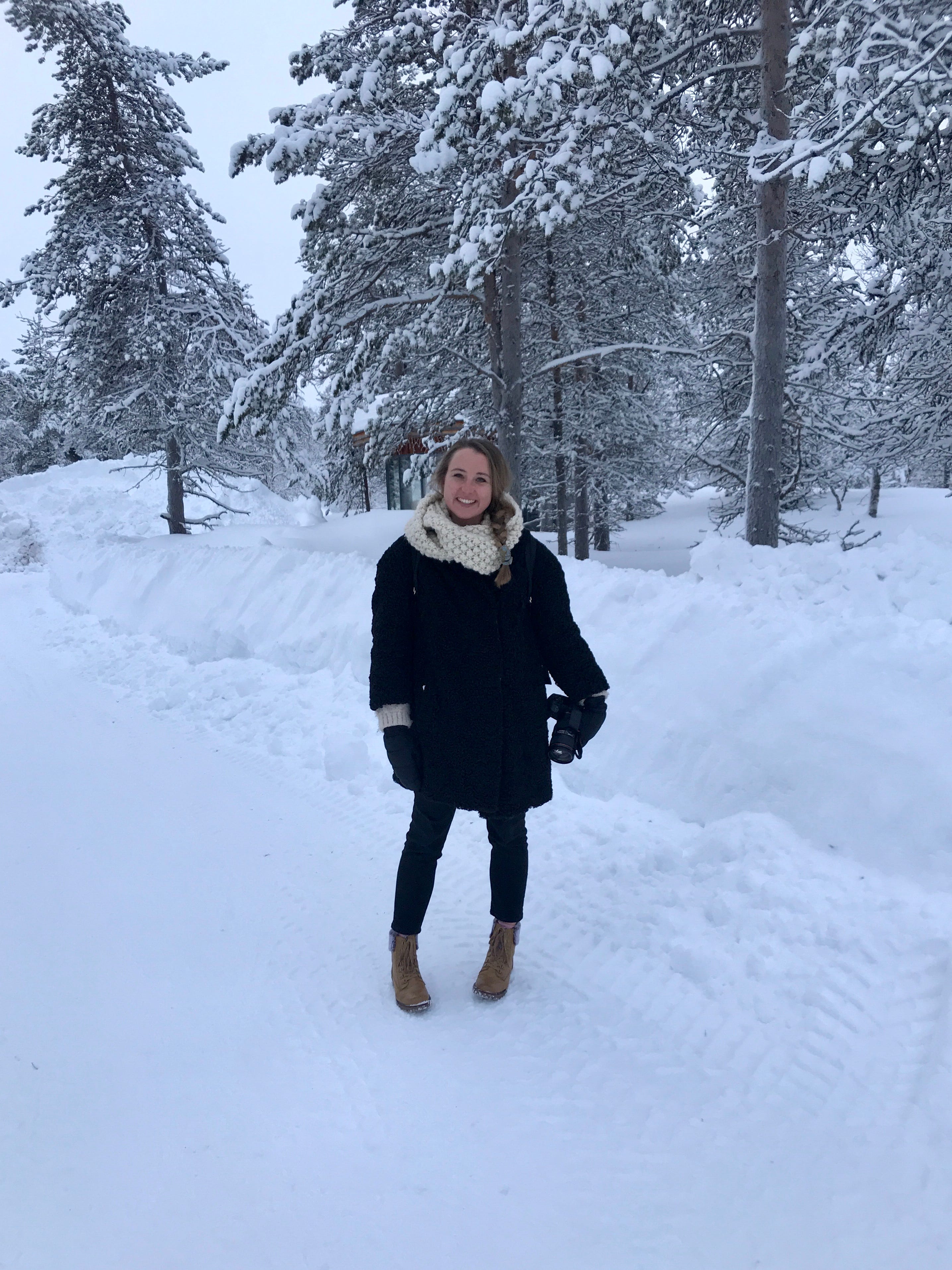 “There is something magical about the forest and the Finnish soul has always been linked with it,” reads the guide.

“The green colour is calming; the gentle rustling of the leaves and pine needles is like music. Finns feel good in the forest. Not alone, not lost – the forest provides protection and peace.”

I walked in forests both in Lapland and on the outskirts of Helsinki, although being January, there was a distinct lack of greenery. 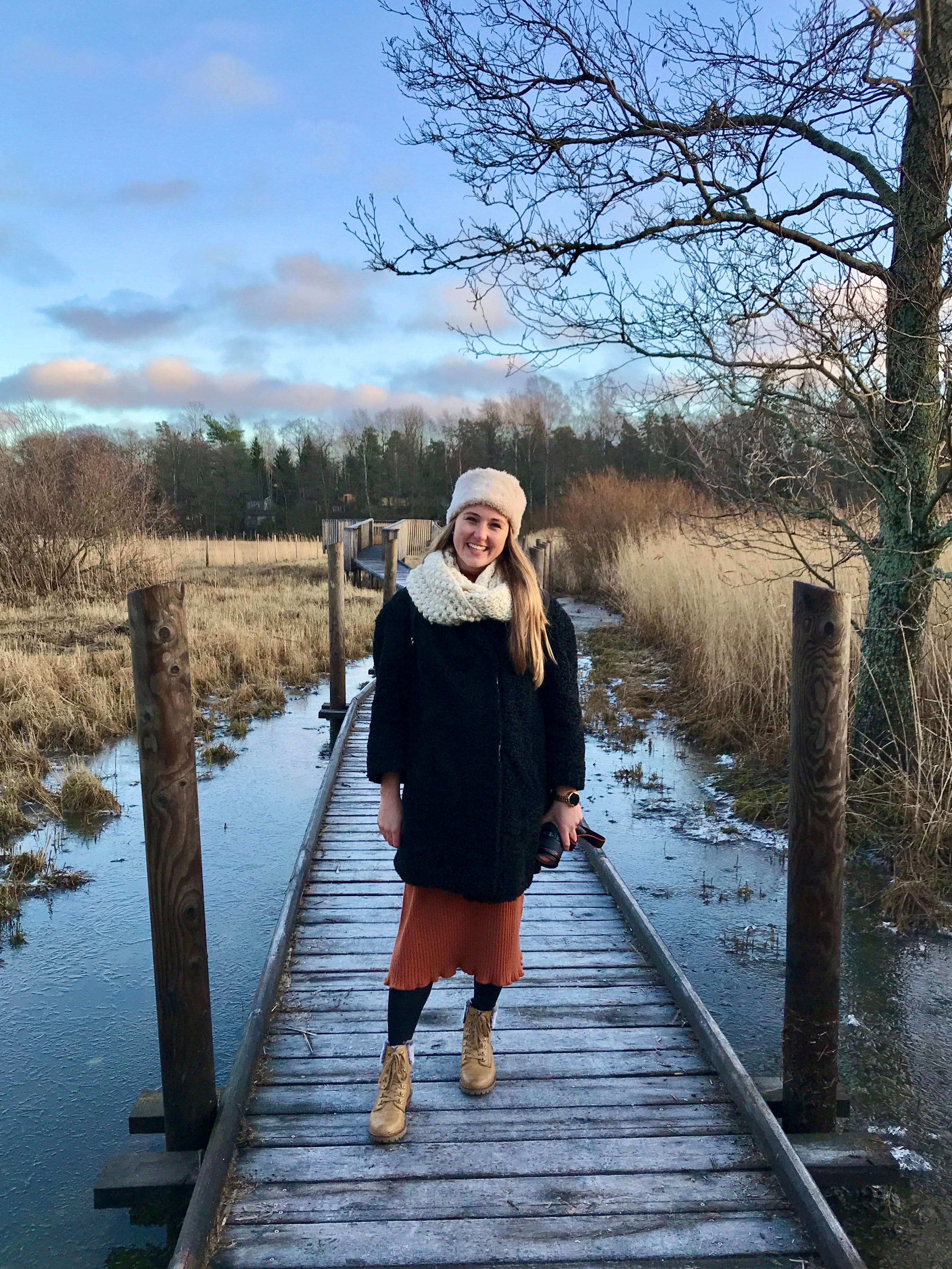 Despite that, I definitely still felt the power of spending time in nature and being among the trees. It really was calming.

I walk a lot in my day-to-day life, but I’m always going somewhere. It was really relaxing to walk just for the sake of walking, soaking up the beautiful scenery.

Step three: Swim in a hole in the ice. “Believe it or not, swimming in icy water really does you the world of good,” the guide says.

“Quite simply, the secret of plunging into icy water lies in the feeling that surges through your body once you get out of the water – as soon as you’re back on dry land your circulation kicks in and your body starts to warm up and makes you feel, well, happy.”

The benefits of cold water plunging are well documented, but that doesn’t mean I wasn’t terrified by the prospect. 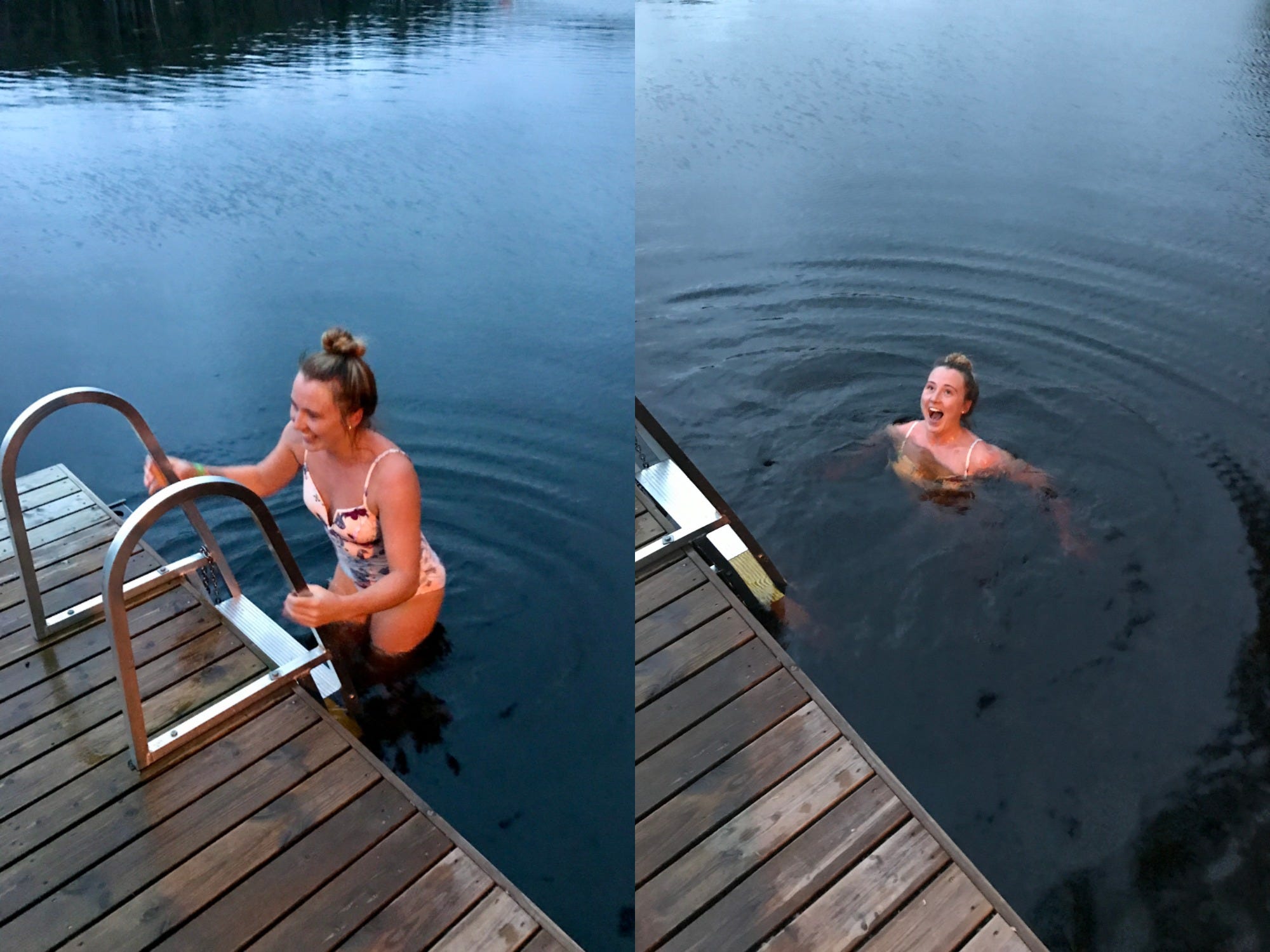 I followed the traditional Finnish protocol of going from hot smoke sauna to cold water – the lake wasn’t quite freezing but the outside temperature was was about 2°C (35°F) – on a January afternoon. Considering my teeth were chattering simply standing outside in a bathing suit, I was mildly dreading it.

Incredibly, I loved it. The water felt amazing! What a rush! I could totally see how people got addicted – I went for an even longer plunge the second time after warming up in the sauna again. “Berry-picking is something nearly all Finns do, regardless of age,” says the guide. “Wandering in the woods, deep in thoughts, filling your basket with blueberries … it is a Finnish kind of therapy for the soul.

“Once home, you bake a delicious blueberry pie and eat it with milk. Simple things are what make us happy.”

Unfortunately, perhaps given the time of year, I failed to find any wild berries to pick — but I bought some instead. 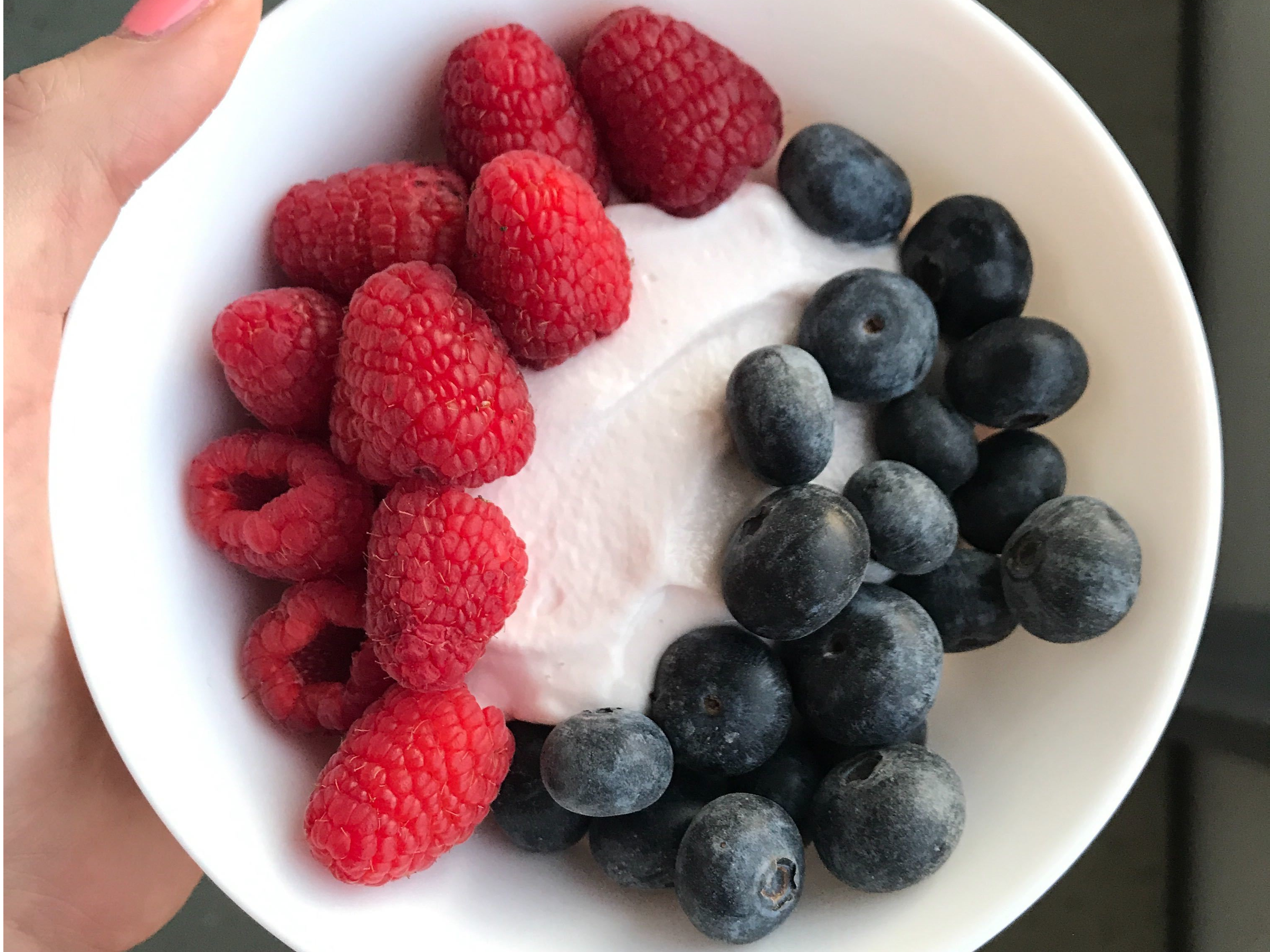 I may not have had the therapeutic joy of berry-picking, but Idid enjoy the pleasure of eating them.

Not in a pie (my Airbnb was lacking in bake-ware) but with yogurt or on their own, the berries tasted delicious – juicy, fresh, and crisp, they definitely made me feel wholesome and happy. “Contrasts are a key factor in the allure of Finland where 24-hour sunlight in the summer replaces the dark winter days and blazing northern lights,” says the guide.

“During winter the northern lights shine about every other clear night between September and March. Who wouldn’t be happy under such a constant, spectacular light show?”

I tried to see the magical light, I really did. I went to Lapland and set an alarm on an aurora app on my phone. But it was so overcast there was no magical light to be seen. 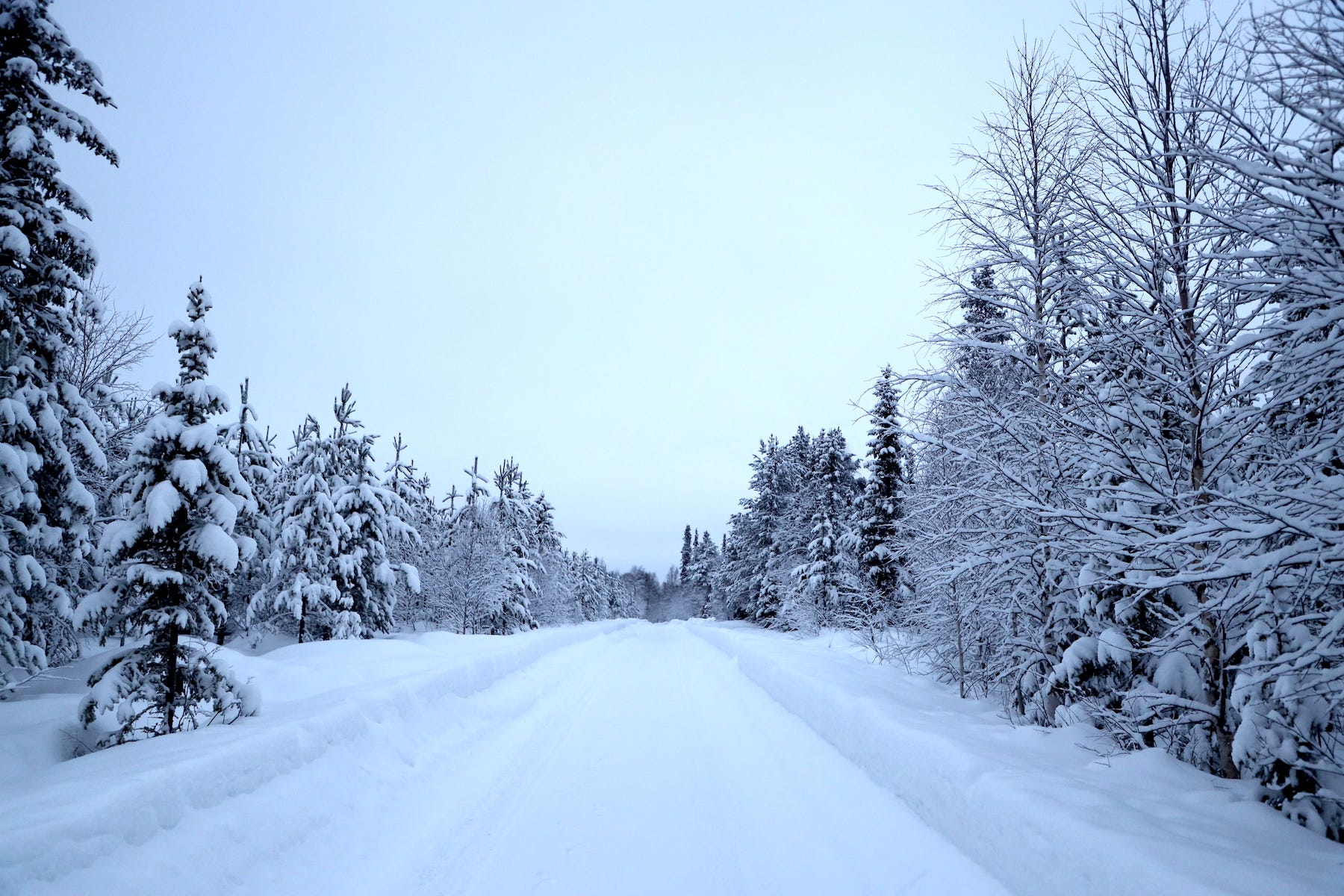 Still, the fact that there were only a couple of hours a day where the sun was actually up was quite special, and the hours either side cast a beautiful pale blue glow over the snow. 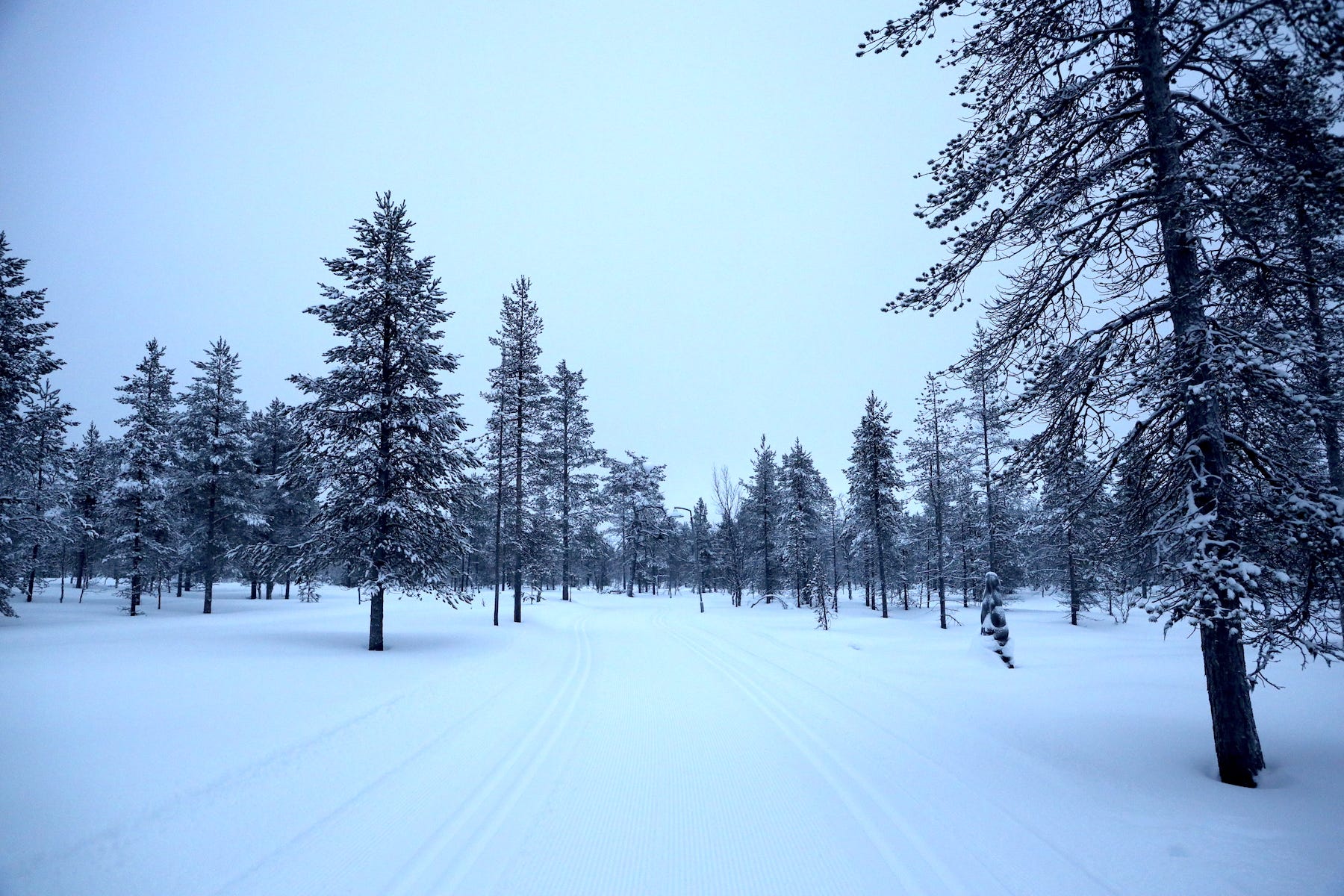 “In the rush and crush of modern life, the rarities are what make us happy, such as space, quiet and time,” the guide explains.

“The space to breathe, a time to dream – you can find these treasures in Finland, where the lakes are many and the people are few.”

I have never been anywhere as peaceful, calm, and quiet as Lapland. 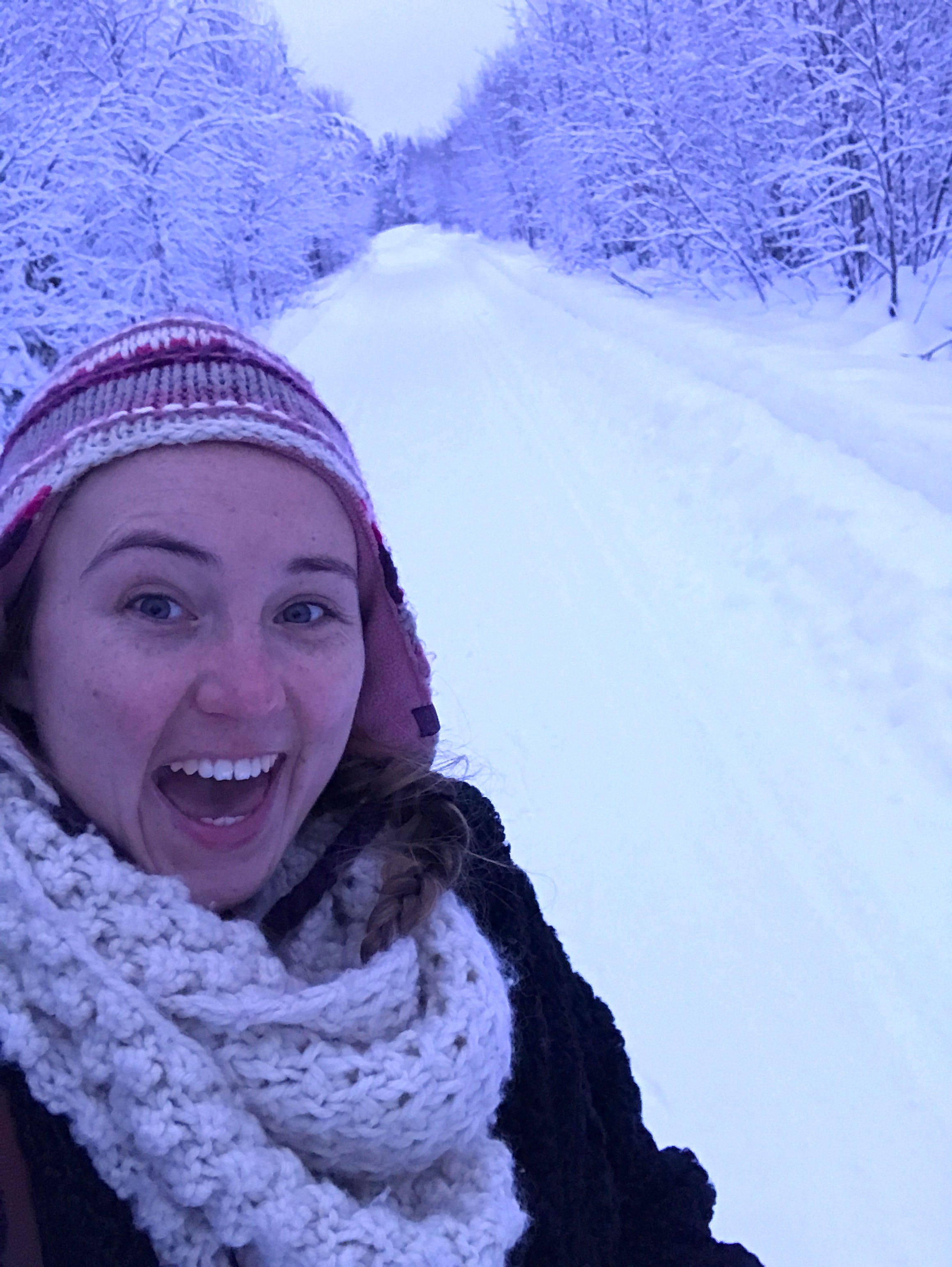 Despite how popular it is with tourists, there were very few people around, and seemingly endless countryside.

As I wandered through the snow with nothing but my thoughts for company – I didn’t even feel the need to listen to podcasts or music like I do usually – I simply soaked up my beautiful surroundings and really did feel remarkably at peace and content.

Step seven: Kalsarikänni AKA “drinking at home, alone, in your underwear” 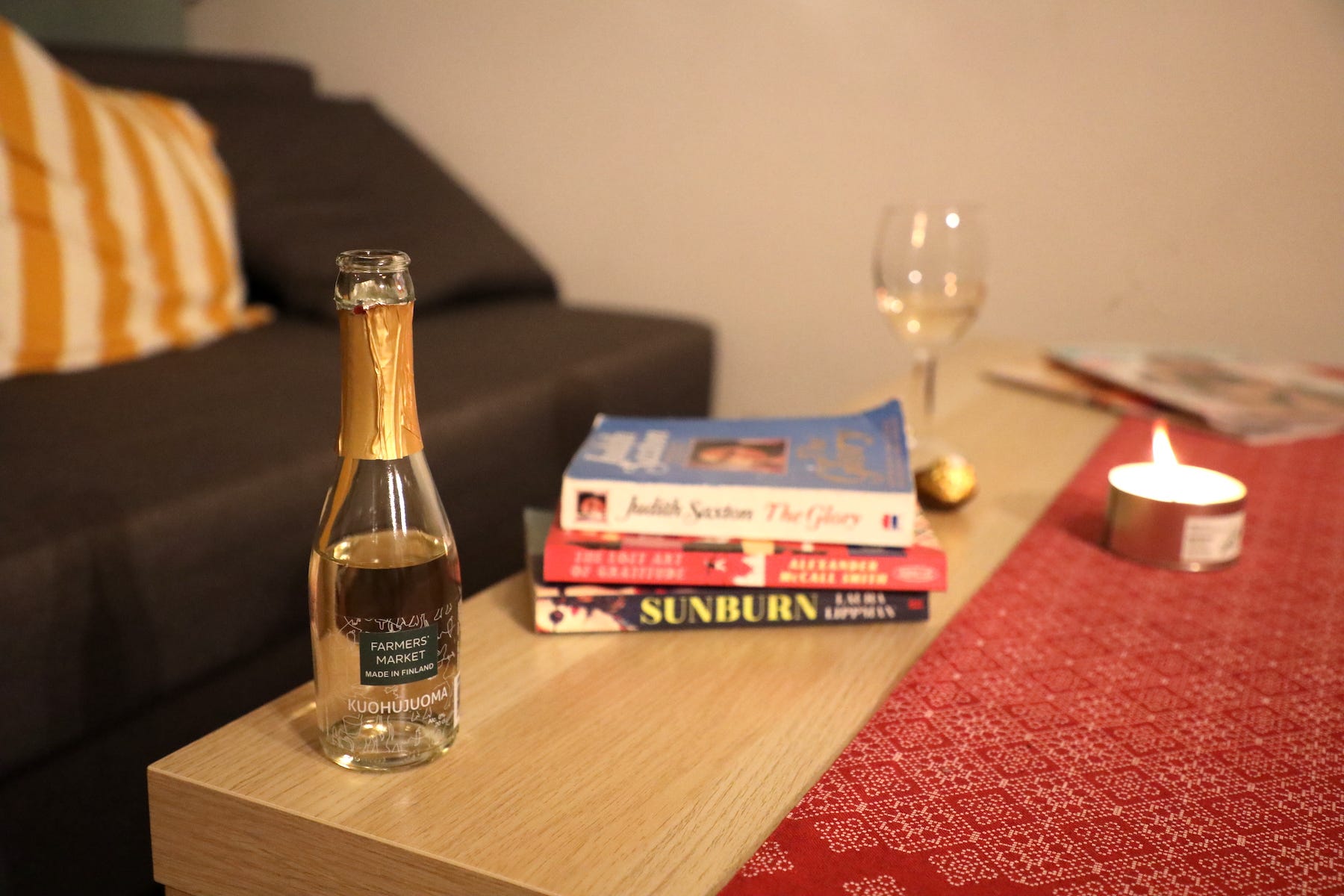 OK, this one isn’t an official step in the Visit Finland guide, however, any Finn will tell you it’s an essential component in Finnish happiness so I figured I had to give it a try.

It’s meant to be about getting drunk with no intention of going anywhere.

As I was doing Dry January at the time, I picked up a little bottle of a non-alcoholic Finnish sparkling wine called Kuohujuoma instead. 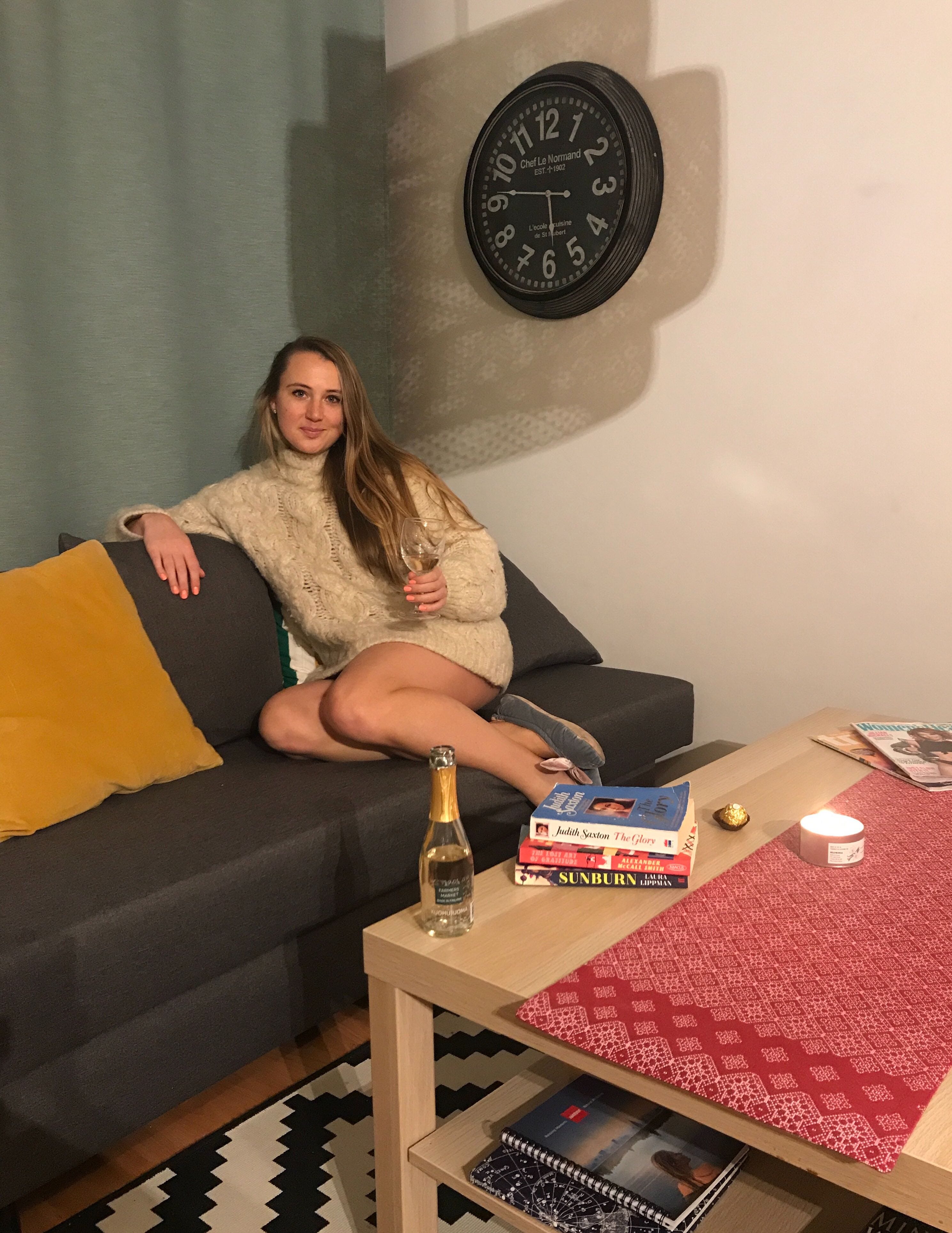 I cranked the heating up, stripped down, lit a candle, and settled in for the evening with a book and the sound of the wind thrashing and rain pouring outside.

Despite not getting the full effect of Kalsarikänni due to my sobriety, it has to be said, I felt pretty damn happy. Why leave the house when you can stay in? The Finns know how to do a wintry evening right.

So, a week and seven steps later, did I feel happier? It was a definite yes.

Each step on its own was entirely pleasant and very relaxing, and combined, the effect was even stronger.

It’s not like each step leaves you jumping for joy or beaming from ear to ear, but these little things – arguably acts of self-care if you want to be all millennial about it – left me feeling calmer and more relaxed, and that made me happy.

Kalsarikänni will definitely become a regular part of my life.