The most famous women in NASA history 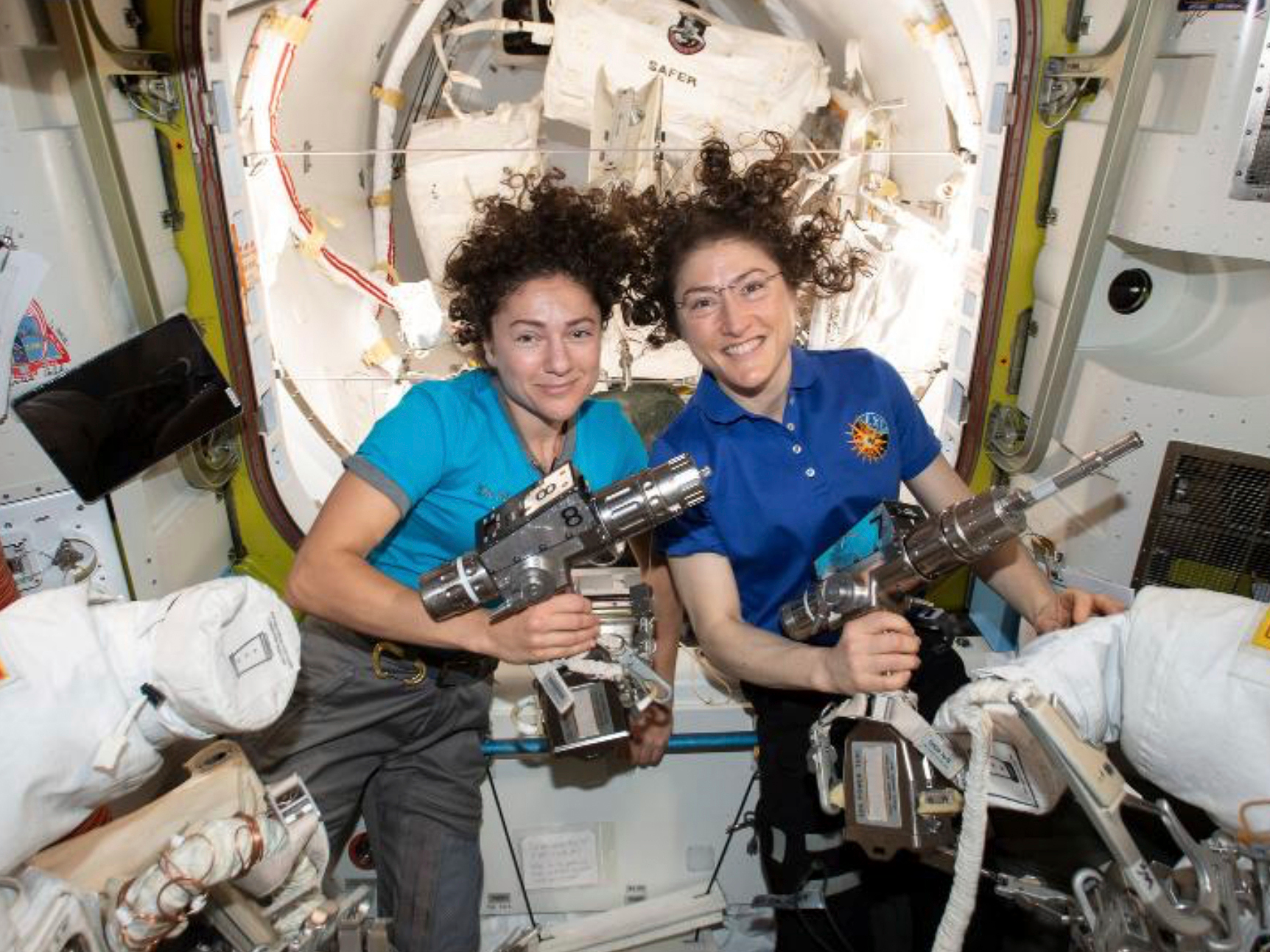 NASA/APJessica Meir and Christina Koch pose for a photo in the International Space Station.

Women have played crucial roles in advancing space exploration throughout NASA’s 61 years, from performing calculations to sending astronauts to the moon to launching into space themselves as mission specialists and commanders.

Here are 17 women who became famous for their contributions to the science of space travel. 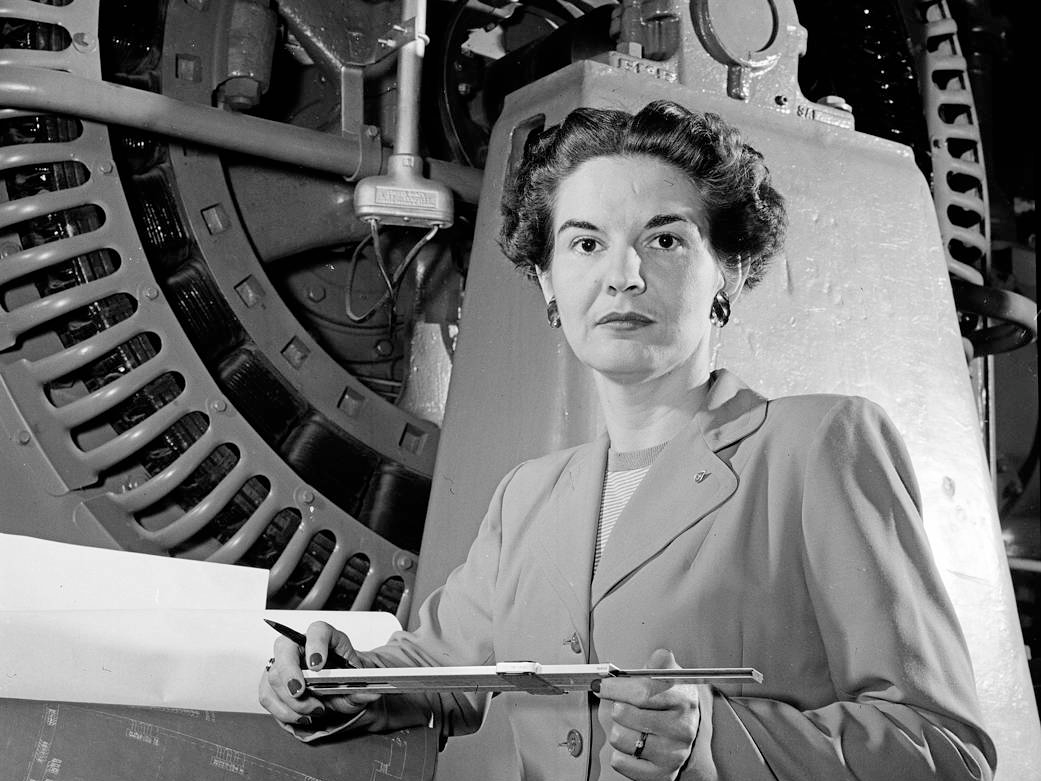 Kitty O’Brien Joyner was the first woman to graduate from the University of Virginia’s engineering program after winning a lawsuit challenging its all-male engineering school. She joined NACA (which later became NASA) in 1939 and was its first female engineer, working on turbines in wind tunnels and researching supersonic flight. She retired from NASA in 1971. Katherine Johnson began working as a “human computer” at NACA in 1953. She calculated trajectories for Alan Shepard, the first man in space, and John Glenn, who asked that Johnson personally check the electronic computer’s results. She also calculated the trajectory for Apollo 11’s flight to the moon in 1969.

Johnson received a Presidential Medal of Freedom in 2015 honouring her accomplishments in paving the way for gender and racial equality as a black woman in STEM, and was played by actress Taraji P. Henson in the 2016 movie “Hidden Figures.” 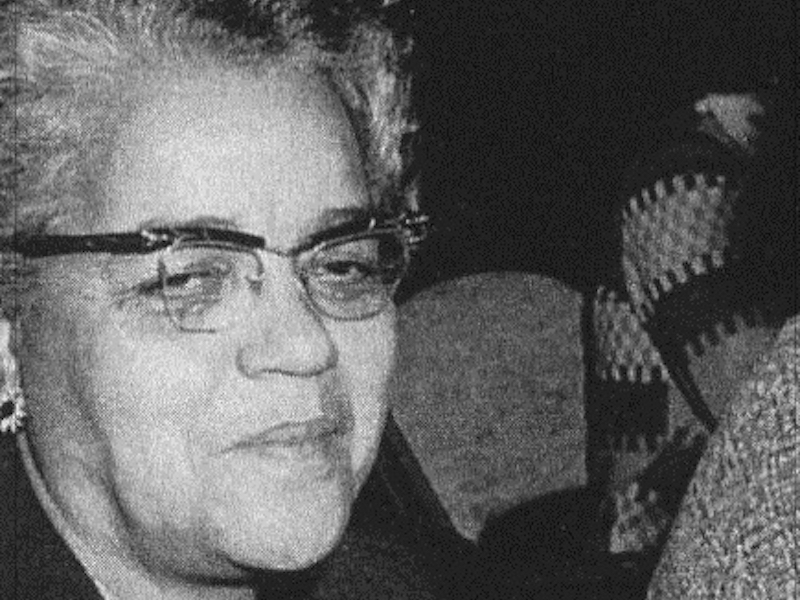 She was also a mathematician and expert in FORTRAN, a programming language for numeric and scientific computing. She retired from NASA in 1971.

She was portrayed by Octavia Spencer in “Hidden Figures.” 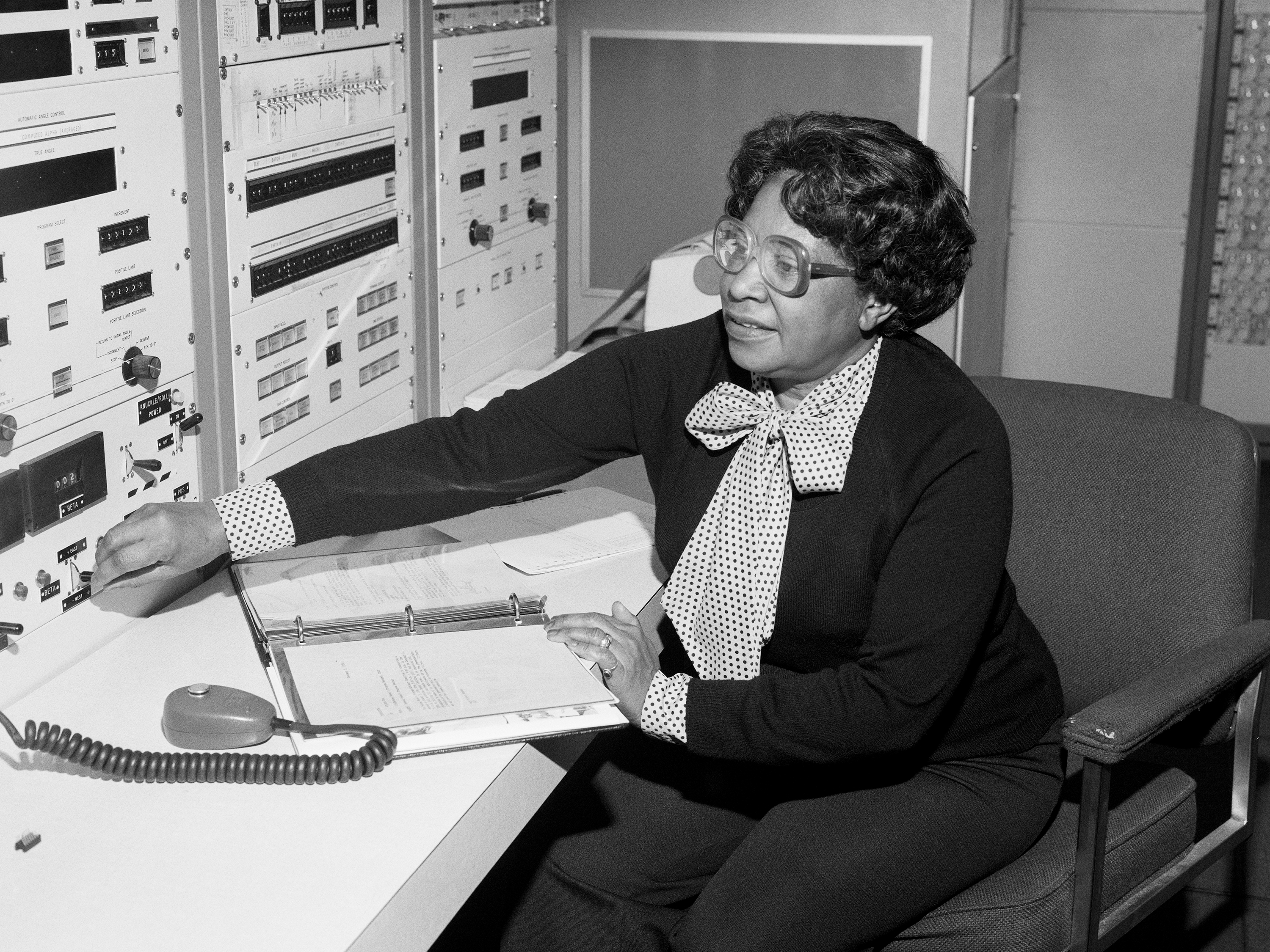 Mary Jackson was a “human computer” in the segregated West Area Computing Unit before working with engineers on NACA’s Supersonic Pressure Tunnel that blew winds at two times the speed of sound.

Jackson obtained special permission to attend graduate-level maths and physics classes through the University of Virginia held at the then-segregated Hampton High School in order to become an engineer. In 1958, she was promoted from mathematician to NASA’s first black female engineer.

Twenty years and dozens of papers later, she became the Langley Research Centre’s Federal Women’s Program Manager, leading efforts to hire and promote more women at NASA. She retired in 1985.

Nancy Roman was known as the “Mother of Hubble.” Nancy Roman joined NASA in 1958 and was its first chief astronomer. She was known as the “Mother of Hubble” for her work to bring the vision of a space-based telescope to life.

Sally Ride was the first American woman to launch into space. 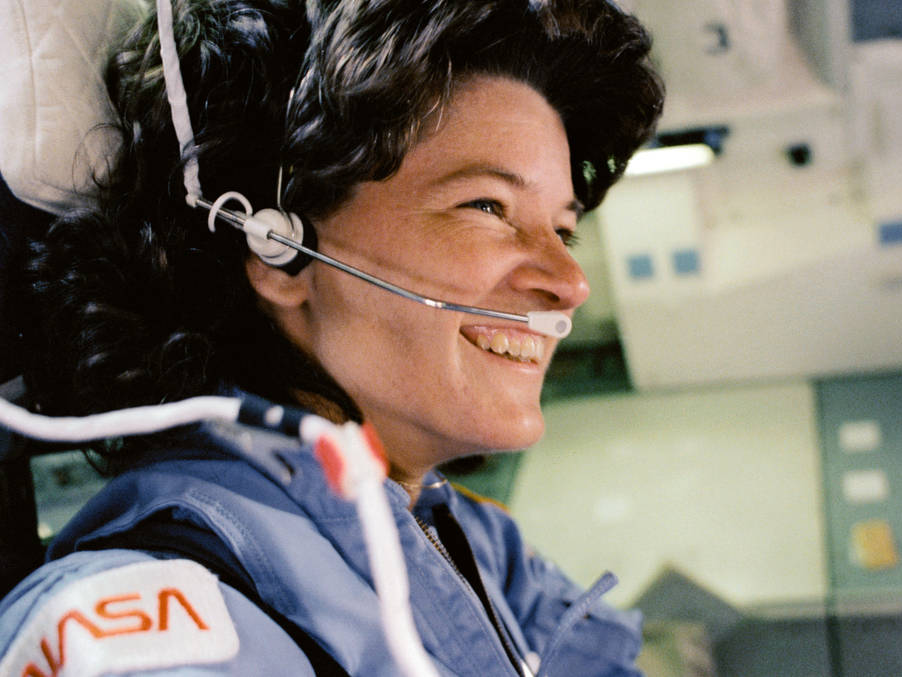 NASASally Ride on the space shuttle Challenger in 1983.

Sally Ride dreamed of being a professional tennis player when she was young. Instead, she was the first American woman to launch into space. She flew on Challenger twice, once in 1983 and again in 1984, and investigated the explosion of the space shuttle in 1986.

After her time as an astronaut, she taught physics at the University of California, San Diego, wrote children’s books, and founded a nonprofit called Sally Ride Science.

Anna Lee Fisher was the first mother to travel to space. Fisher was pregnant when NASA told her they wanted to send her to space.

“I wasn’t about to say no,” she told The Washington Post.

After giving birth to her daughter and completing 14 months of intense training, Fisher went to space on a seven-day, 23-hour mission on the space shuttle Discovery in 1984. She was the first mother in space.

After the Challenger explosion grounded NASA’s shuttle program, she took a leave of absence and returned in 1996 as chief of the space station branch. She retired in 2017.

Judith Resnik was the first Jewish person and second American woman to travel to space after Sally Ride. NASA/Space Frontiers/Getty ImagesMission specialist Judith A Resnik sends a message to her father from on board the shuttle Discovery in 1984.

Resnik served as mission specialist in 1984 on board the space shuttle Discovery and specialised in operating its mechanical arm.

She was one of seven crew members that died when the Challenger space shuttle broke apart seconds after liftoff in what would have been her second space flight in 1986.

Christa McAuliffe was supposed to be the first teacher in space, but tragically died in the Challenger explosion in 1986. Christa McAuliffe was a teacher at Concord High School in New Hampshire who was selected to participate in NASA’s Teacher in Space program to get students excited about maths, science, and space travel.

Tragically, McAuliffe never made it into orbit. She died in the 1986 Challenger space shuttle explosion.

Kathryn Sullivan was the first American woman to walk in space. 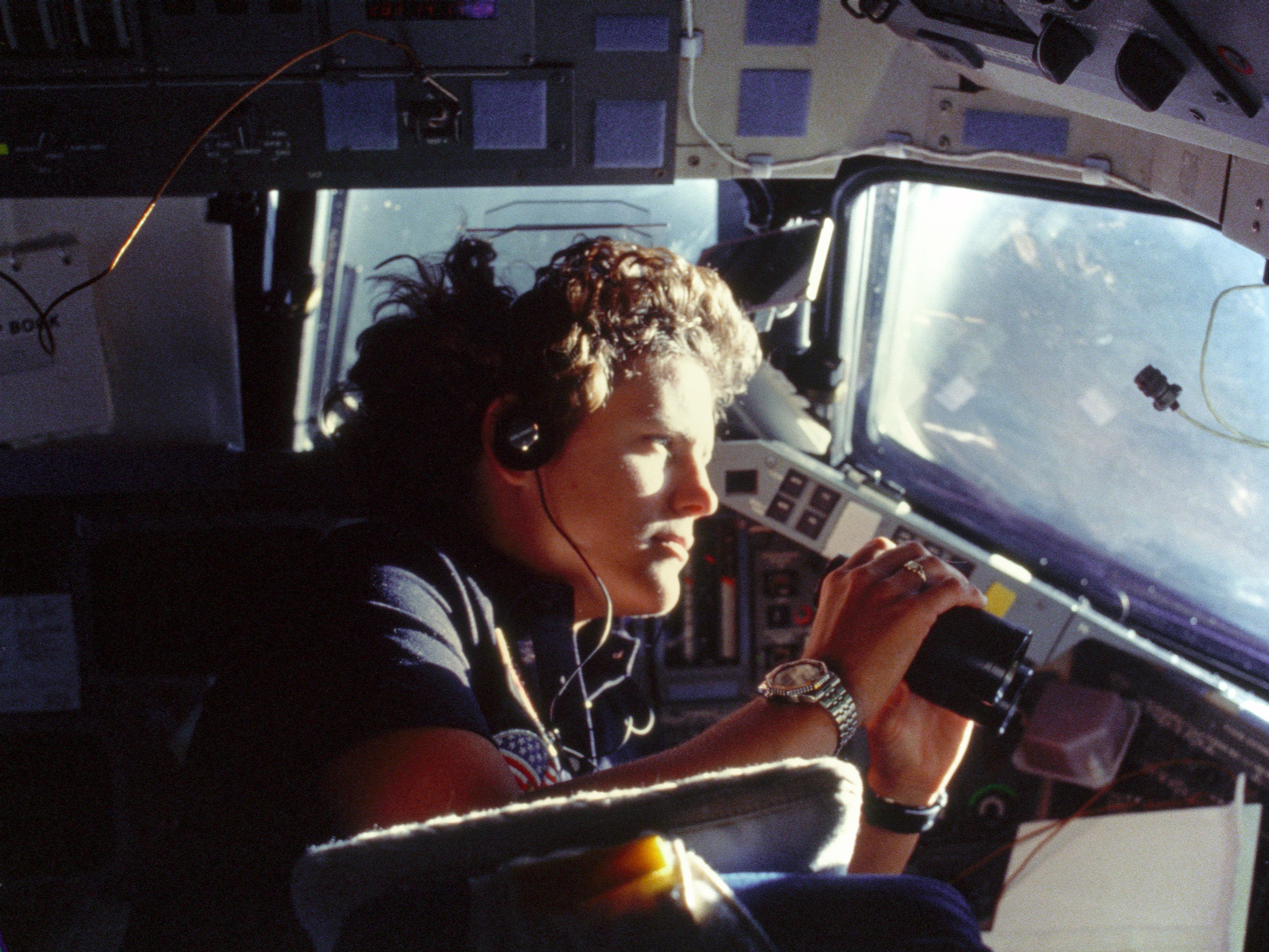 NASAKathryn Sullivan using binoculars to view the Earth in 1984.

Kathryn Sullivan spent over 532 hours in orbit during her time as an astronaut at NASA. She went to space for the first time in 1984 and performed a 3.5 hour space walk. She returned in 1990 to deploy the Hubble Space Telescope and 1992 to conduct experiments as the payload commander of the Atmospheric Laboratory for Applications and Science.

Mae Jemison was the first African American woman in space. 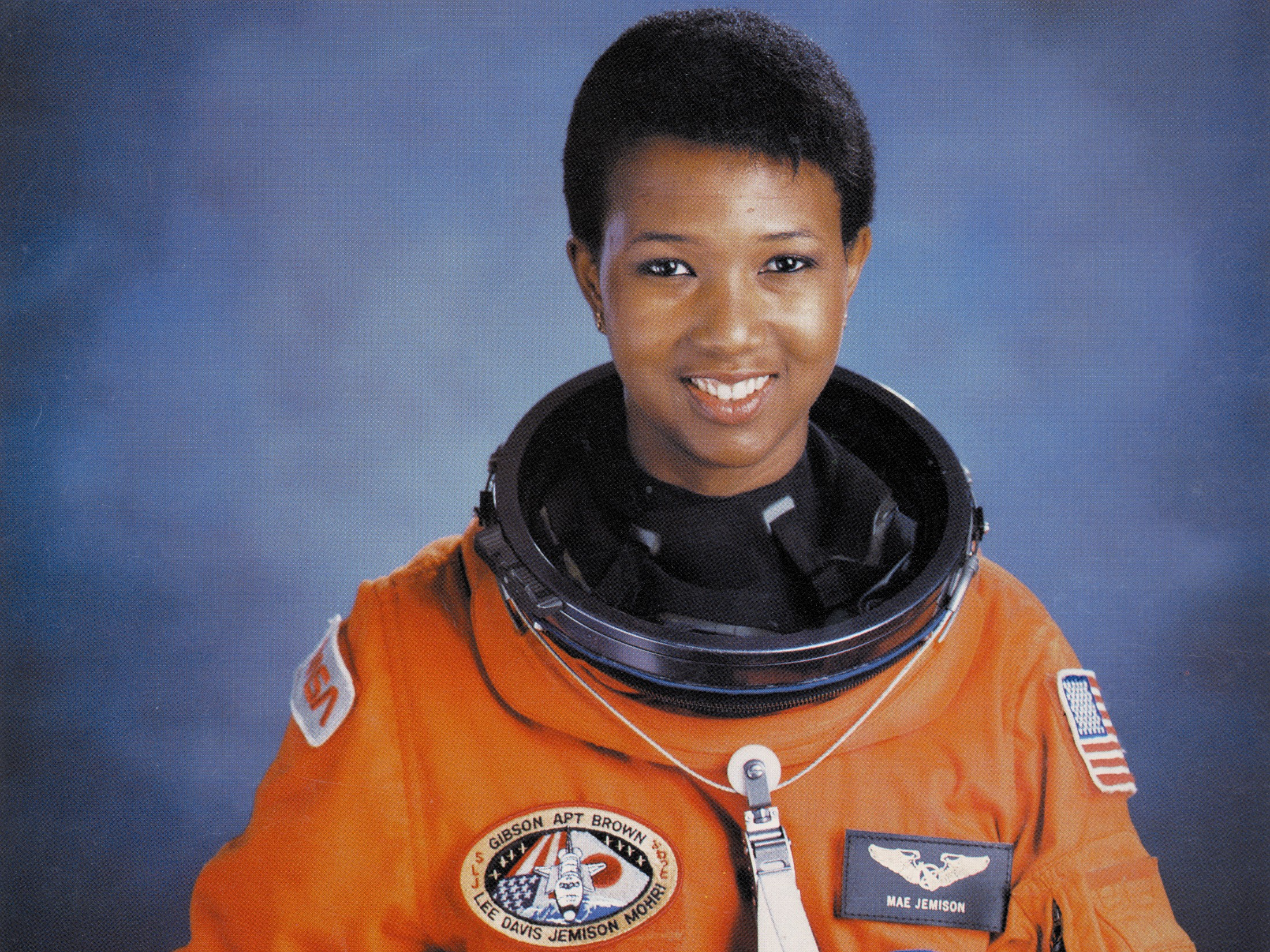 Jemison served as the mission specialist on Endeavour in 1992, performing experiments in bone cell research on a week-long flight.

She went on to found The Jemison Group, a technology consulting firm, and to lead the 100-Year Starship program established by the Defence Advanced Research Projects Agency to further space travel beyond the solar system. 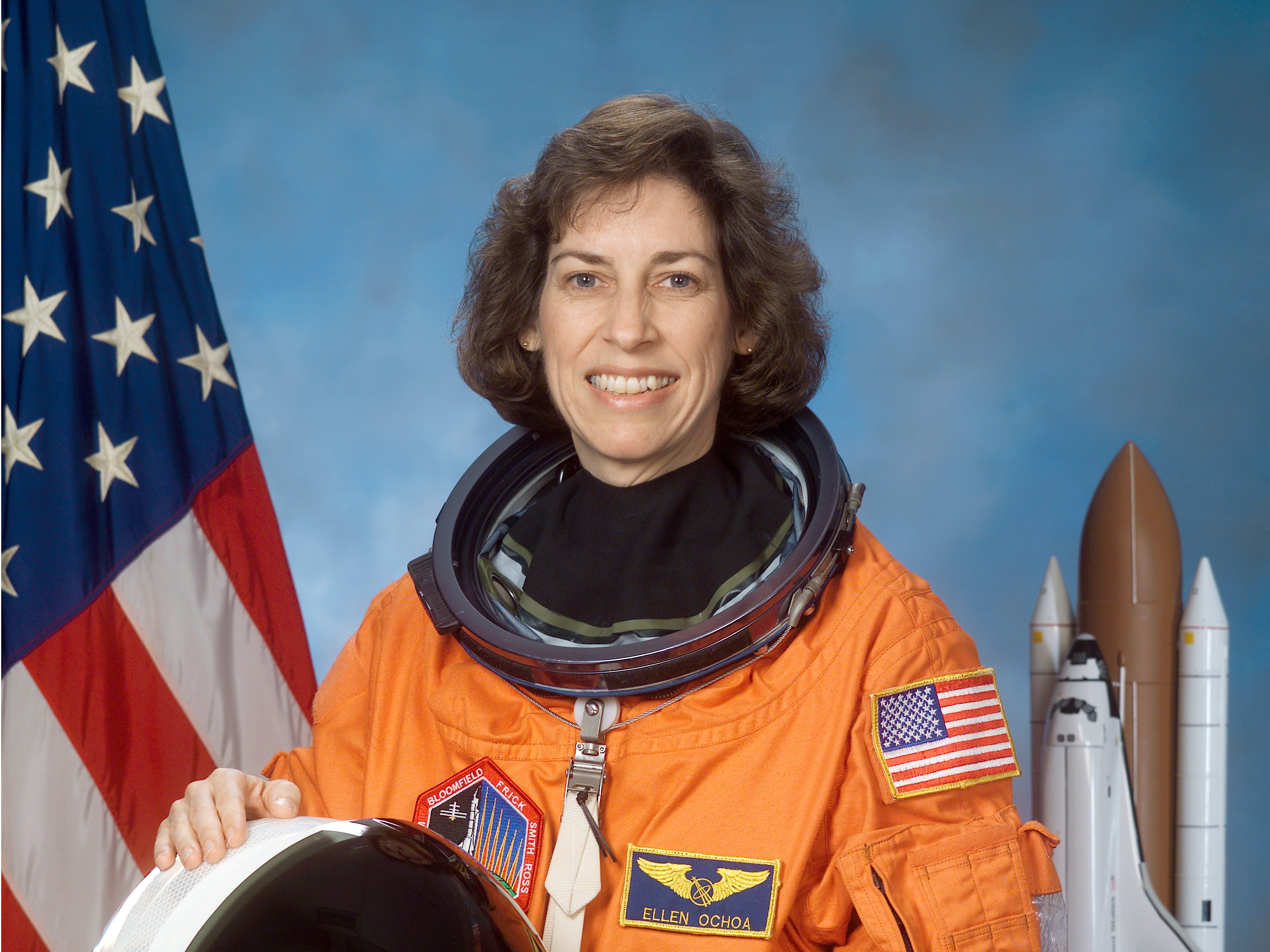 Ochoa was the mission specialist on board the Discovery in 1993 and went to space three more times in 1994, 1999, and 2002. She then became director of the Johnson Space Centre. In 2018, she left NASA to become vice chair of the National Science Board. 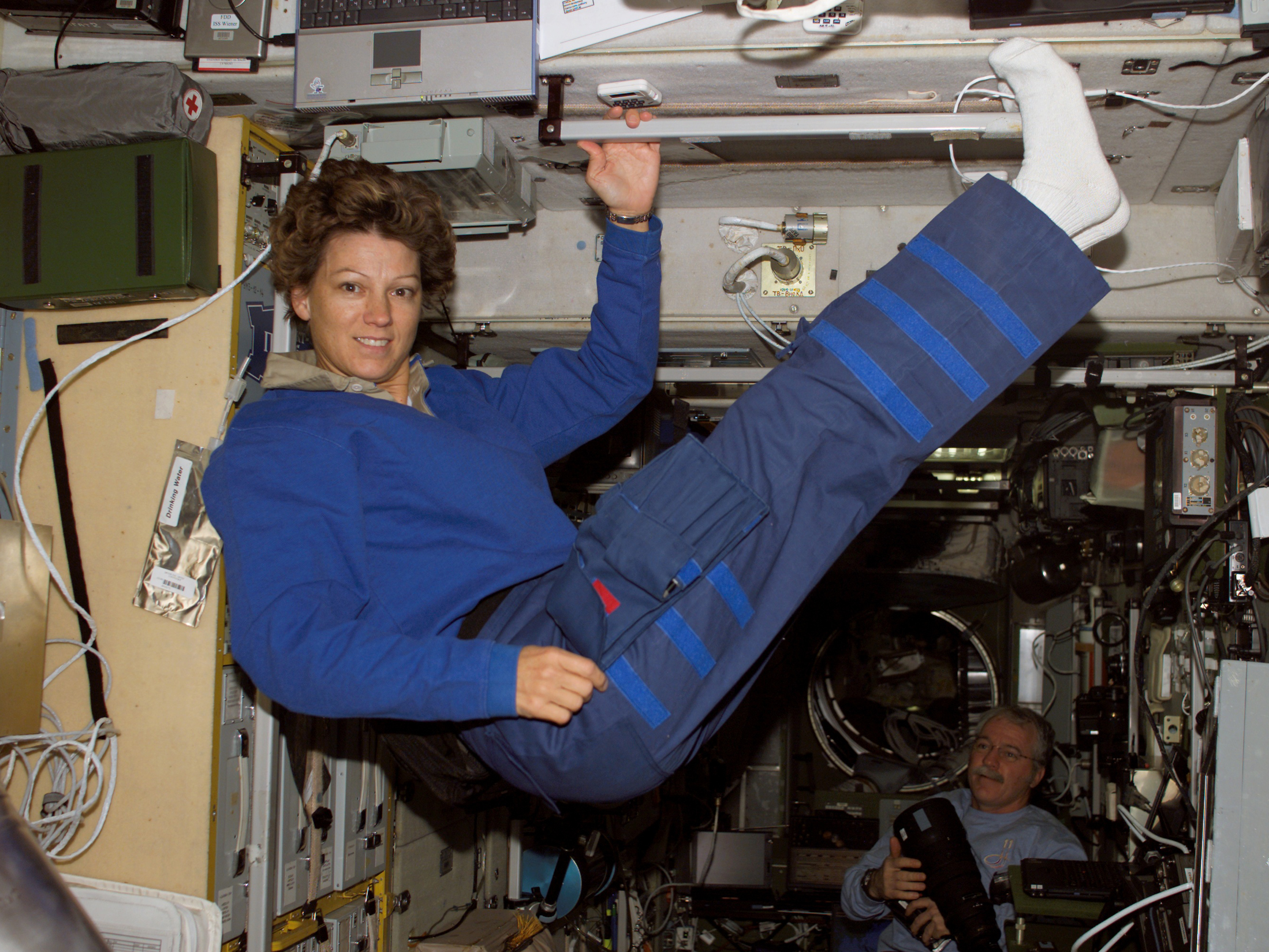 NASAEileen M. Collins on the ISS.

Kalpana Chawla was the first Indian woman in space. 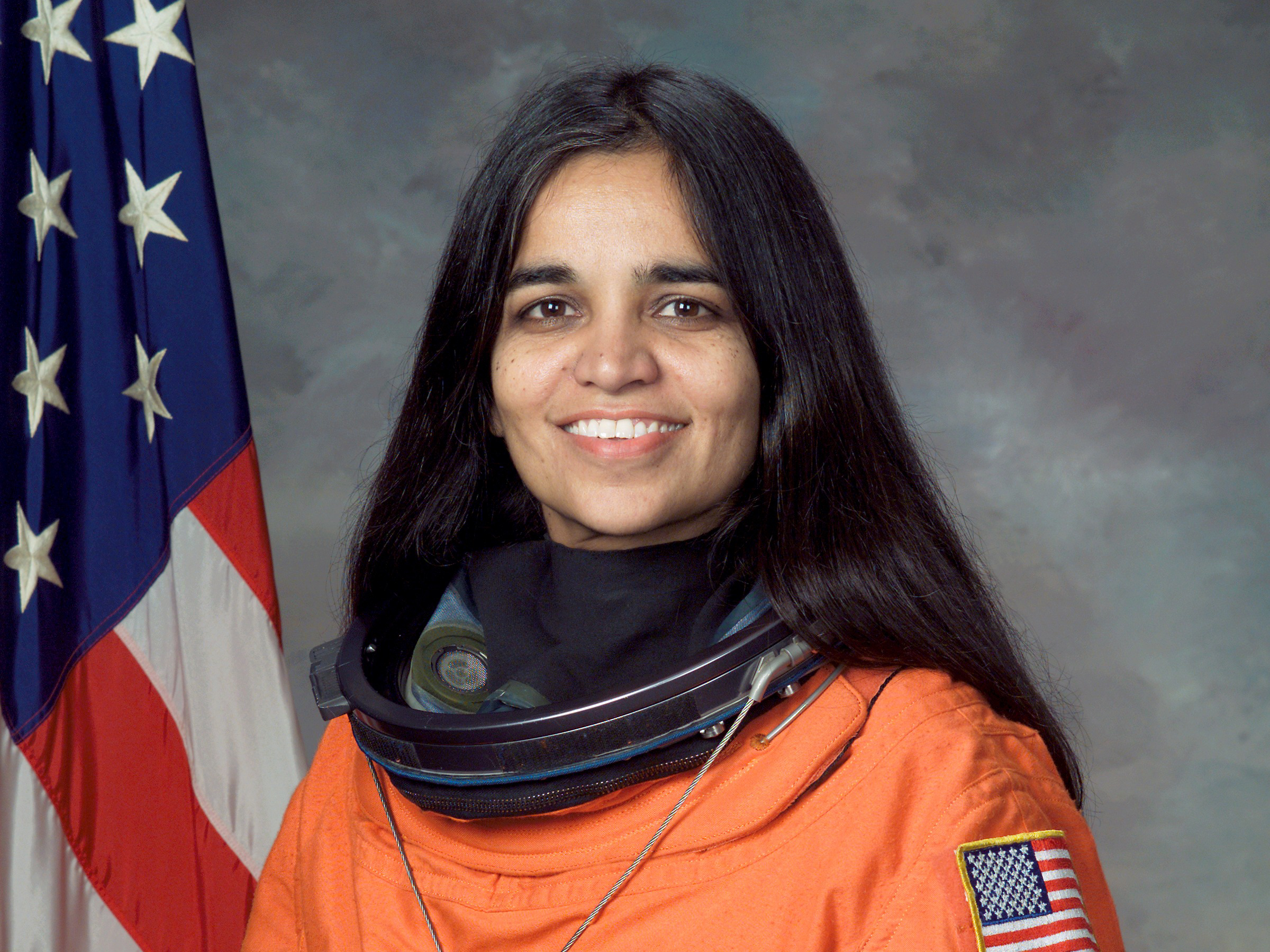 Chawla worked as a mission specialist and robotic arm operator in 1996, and returned to space in 1997 and 2003, all on the Columbia space shuttle.

Tragically, she died in 2003 when the Columbia shuttle broke apart upon reentry into the Earth’s atmosphere. She spent a total of 30 days, 14 hours, and 54 minutes in space.

Peggy Whitson has spent more time in space than any US astronaut. 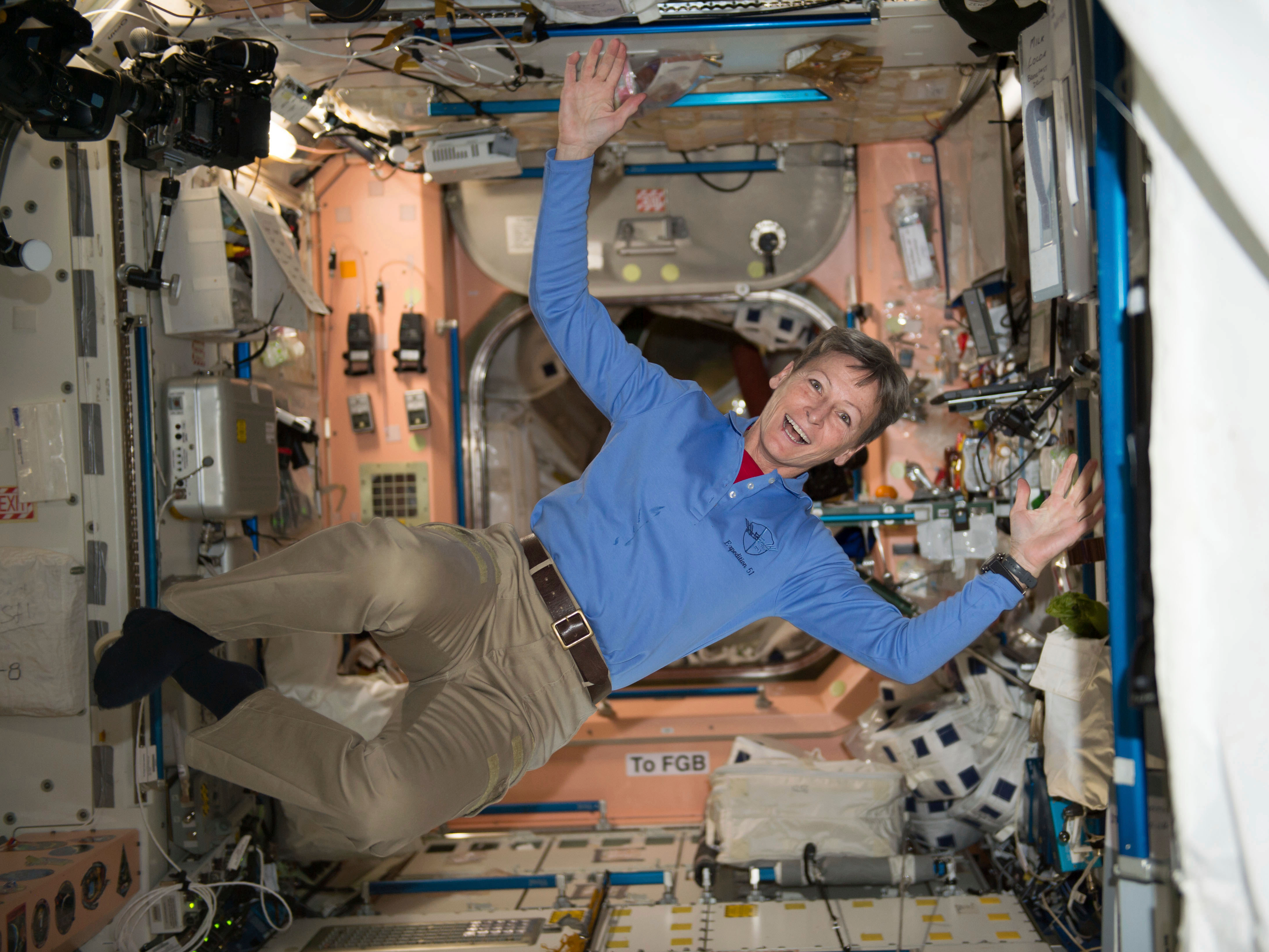 NASA via APPeggy Whitson on the ISS.

Peggy Whitson started as a researcher at NASA in the 1980s and went on to become an astronaut, visiting the International Space Station for the first time in 2002.

Whitson holds the US record for the most time spent in space at 665 days and was the first woman to command the International Space Station twice. Meir and Koch replaced a broken battery charger on the International Space Station on their historic spacewalk in October 2019.

It was Koch’s fourth spacewalk and Meir’s first. The spacewalk was originally scheduled for March 2019 with Koch and another astronaut, Anne McClain. But NASA was forced to cancel because they didn’t have enough spacesuits in the right sizes.