Capitol riot suspect allegedly wore a shirt that said, 'I was there, Washington, DC, January 6, 2021' when the FBI arrested him 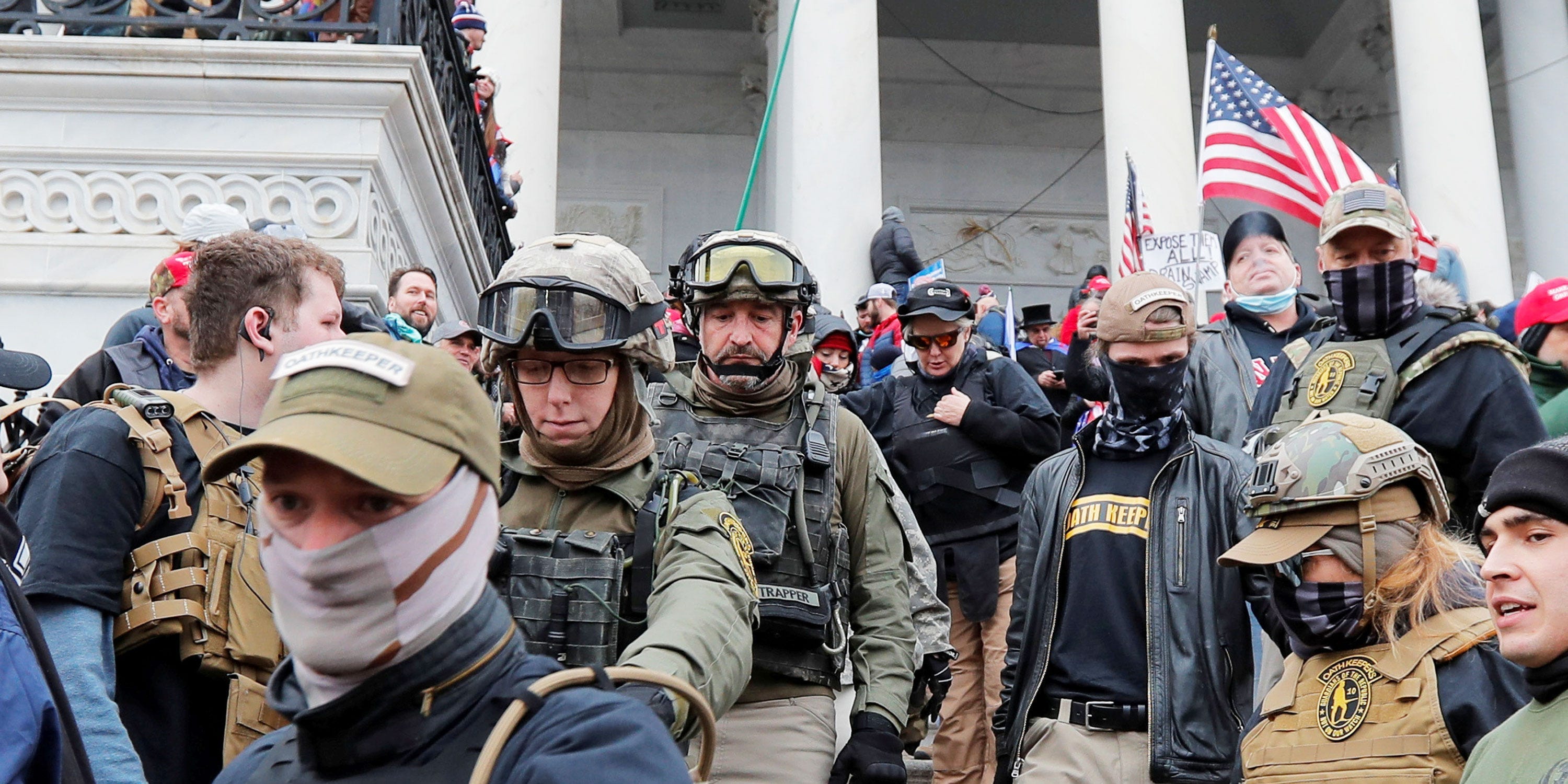 REUTERS/Jim Bourg/File PhotoJessica Marie Watkins (2nd from L) and Donovan Ray Crowl (Center), both from Ohio, march down the east front steps of the U.S. Capitol with the Oath Keepers militia group among supporters of U.S. President Donald Trump in Washington, U.S., January 6, 2021. Both have since been indicted by federal authorities for their roles in the siege on the U.S. Capitol. Picture taken January 6, 2021.

Garret Miller, a Capitol riot suspect, was wearing a shirt with Donald Trump’s face on it that said “Take America Back” and “I was there, Washington, DC, January 6, 2021,” when federal authorities arrested him at his Dallas, Texas, home, according to new court documents.

The new court filing came out on Monday as federal prosecutors have called for Miller to remain in custody as he awaits trial on a list of charges stemming from during and after the January 6 insurrection at the Capitol.

Miller is one of more than 380 people charged in connection with the January 6 riots.

On Facebook, Miller posted a selfie in the halls of Congress, to which a user responded, “bro you got in?! Nice!” and Miller replied, “just wanted to incriminate myself a little lol,” according to court documents.

Some of the other charges Miller is facing relate to threats he made to New York Rep. Alexandria Ocasio-Cortez as well as a Capitol police officer, according to prosecutors.

Miller, the court documents say, fixated on the officer who shot and killed Ashli Babbitt, a San Diego woman who had also stormed the Capitol on January 6.

According to the filings, Miller believed the officer who killed Babbitt was Black and argued that he deserved a public, televised execution. On social media, prosecutors said that Miller wrote, “I had a rope in my bag on that day.” At his home, they recovered weapons, a crossbow, riot gear, and ropes, according to the filing.

On Twitter, and in response to a tweet from Rep. Ocasio-Cortez which said, “Impeach,” Miller wrote, “Assassinate AOC,” according to the documents.

“By bringing tactical gear, ropes, and potentially, by his own admission, a gun to the Capitol on January 6, 2021, Miller showed that he was not just caught up in the frenzy of the crowd but instead came to DC with the intention of disrupting the democratic process of counting and certifying Electoral College votes,” prosecutors wrote in Monday’s filing.

Miller was arrested on January 20 in Texas, and on February 12, a grand jury in the District of Columbia indicted Miller on 12 counts, including civil disorder, obstruction of an official proceeding, making interstate threats, and assaulting, resisting or impeding officers.