As lawmakers debate the extent of further government intervention for another federal spending package, the pandemic continues slamming people’s livelihoods and throwing millions into a world of uncertainty.

Over 40 million Americans have filed for unemployment in the last three months, which has sent the jobless rate soaring to nearly 15% as of last month. That trend came as businesses closed their doors to keep the coronavirus from spreading, forcing a wave of furloughs and job losses in the work force.

The federal government initiated new programs aimed at mitigating the fallout, mainly through a $US600 boost in weekly unemployment benefits and a one-time $US1,200 stimulus check for millions of Americans under the CARES Act in March.


Read more:
‘Embrace the coming crash’: A notorious market bear who called the dot-com bust warns big tech stocks are on the verge of succumbing to the economy’s downturn

On Friday, the Commerce Department released data showing that personal incomes surged over 10% as consumer spending plunged 13%, the steepest drop ever recorded due to lockdowns keeping Americans at home. Many people also scaled back their spending as they were either furloughed or laid off.

But a stunning chart below illustrates the effectiveness of federal aid in significantly boosting household incomes during a period of severe economic contraction and reduced consumer spending. 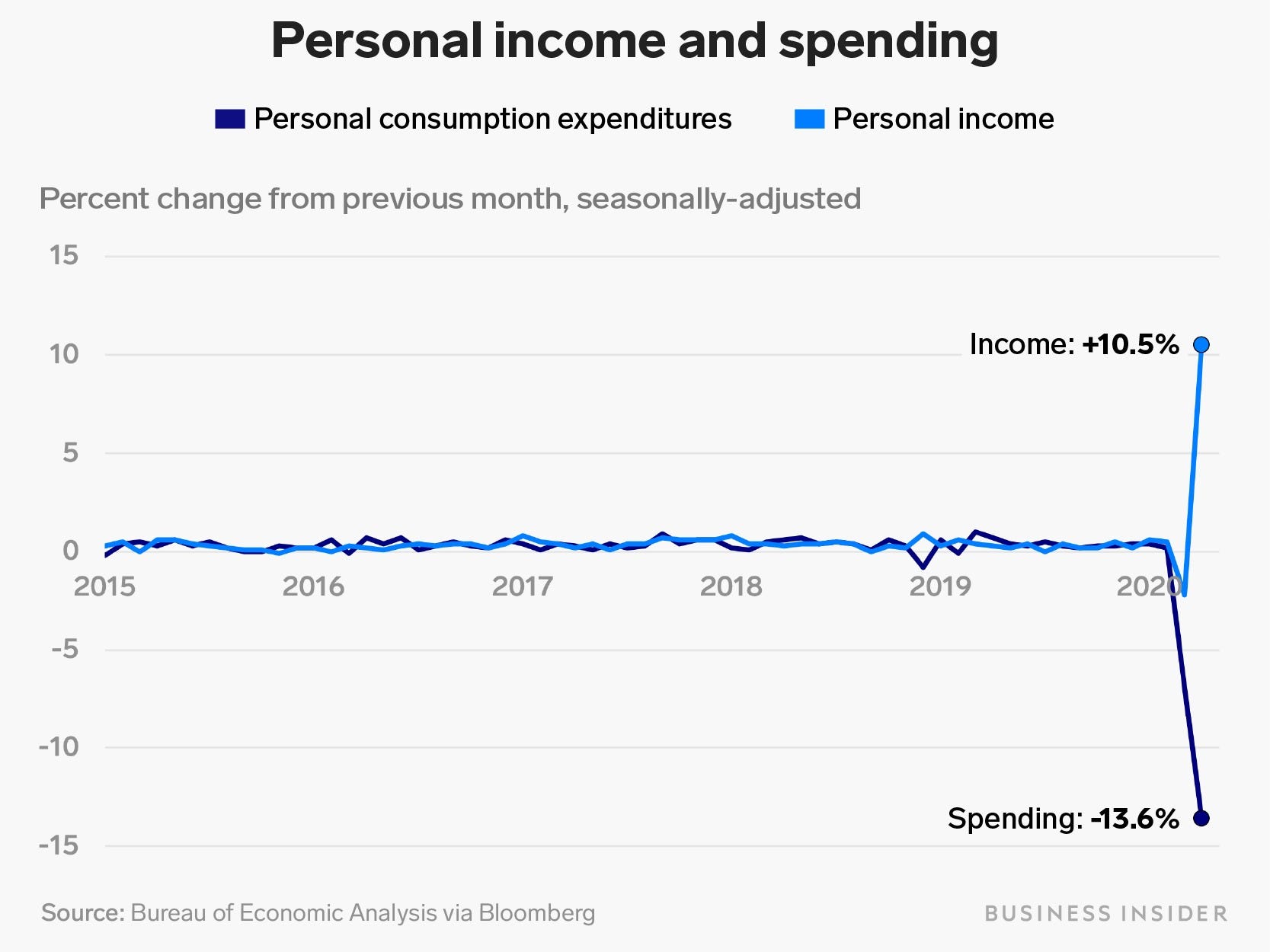 The savings rate also skyrocketed 33% as a share of personal disposable income in May, a record high, according to the data. It’s up from around 13% in March.

What the data relays is the continued effect of the lockdown in April, given that consumption fell nearly 14% as shown in the chart above. It indicated that Americans held onto their money since many businesses remained closed and stayed home to comply with public health guidelines.

“Lost jobs and income thus far have been partially offset by the $US1,200 aid check sent to most citizens and the extra $US600 per week distributed to those put out of work due to the pandemic,” he wrote in a Friday blog post. “In fact, that is the reason why personal disposable income inside the data has not completely collapsed.”

“This is an unambiguous triumph of countercyclical government spending, which will save the U.S. economy a heap of trouble in the medium to long term,” Ludtka told The New York Times.

Still, experts say the trend is likely to be short-lived as there are no additional stimulus checks planned and the ramped-up unemployment payments are set to expire on July 31 without further legislation.

Economists are expecting a rebound in spending as states gradually scale back lockdowns and businesses begin to reopen, causing people to amplify their consumption.

But there’s little prospect of a quick economic recovery, and economists forecast it will take a year or more for personal spending to reach pre-pandemic levels, Bloomberg reported.