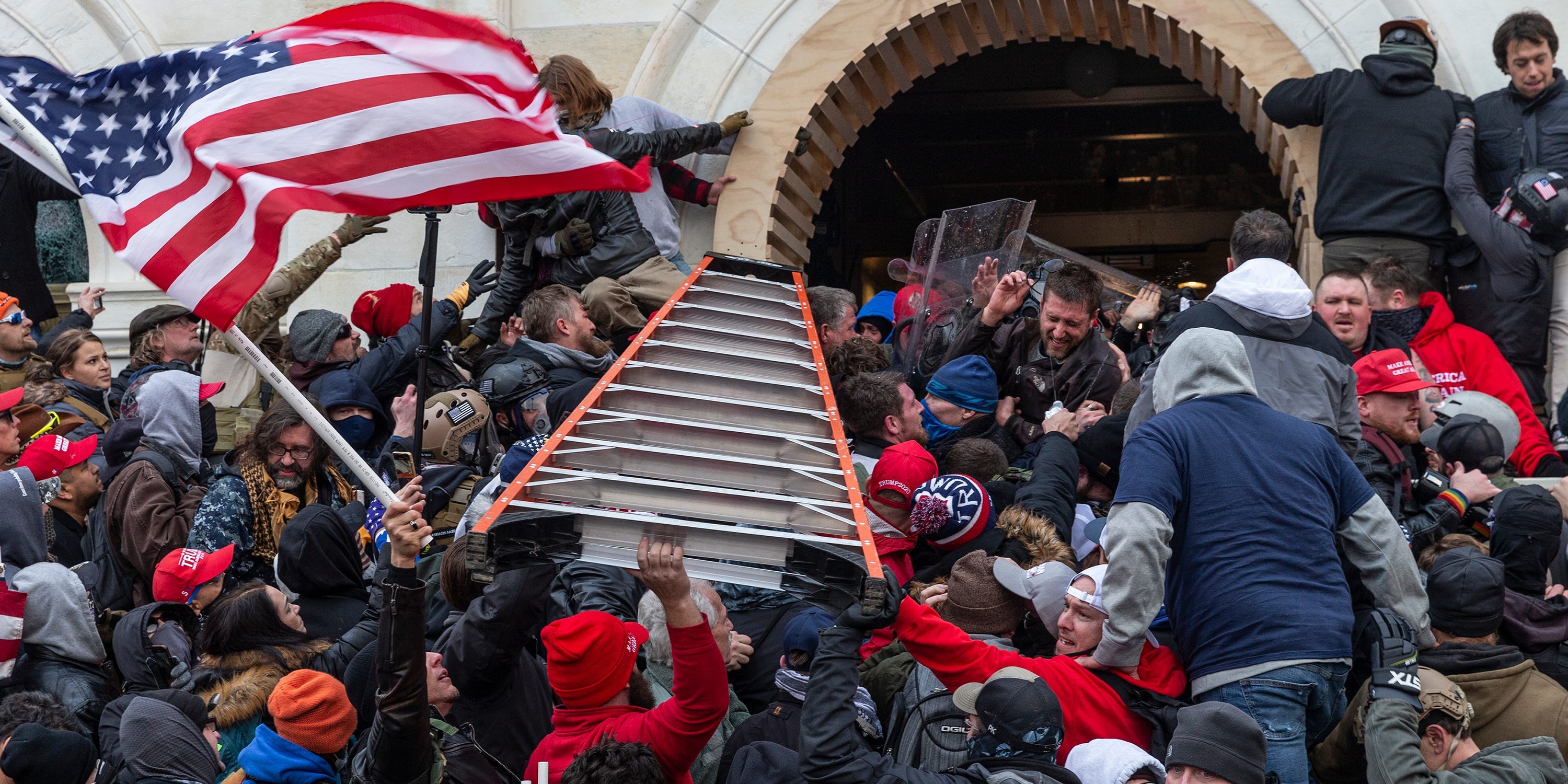 Lev Radin/Pacific Press/LightRocket via Getty ImagesRioters with a big ladder clashing with police officers while trying to enter the Capitol through the front doors.

Federal agents have charged more than 70 people since a violent mob of President Donald Trump’s supporters laid siege to the US Capitol last week to stop the peaceful transfer of power.

In an affidavit this week, the FBI detailed how one man turned over evidence of his alleged crimes to an agent he addressed as “Nice FBI Lady” and explained how he walked into the office of “big boss” Nancy Pelosi, the House speaker.

The affidavit said the man, Kevin Lyons, posted photos on social media showing his plans to attend a rally in Washington, DC, headlined by the president on January 6. Trump has been widely accused of inciting the Capitol riot; at the rally, he urged supporters to march to the Capitol, “fight” the election result, and “take back our country.”

One photo Lyons posted on Instagram was a screenshot of a map of the route from Lyons’ home in the Chicago area to Washington, DC, the affidavit said. In the caption, Lyons wrote that he was “heading to DC to STOP THE STEAL!” After the attempted coup, Lyons posted a photo of a wooden sign that said “Speaker of the House Nancy Pelosi” and captioned it “WHOS HOUSE?!?!? OUR HOUSE!!”

Read more:Joe Biden is hiring about 4,000 political staffers to work in his administration. Here’s how 3 experts say you can boost your chances of getting one of those jobs.

The affidavit said that when agents questioned Lyons about the second photo on January 8 â€” two days after the riot â€” he expressed surprise that investigators had uncovered it because it was up for only an hour before being taken down. The affidavit said Lyons couldn’t “guarantee that he posted it” but went on to show agents the same photo, which he had saved on his phone.

He was “evasive” about whether he had entered the Capitol but told agents he’d had a dream in which he saw “a lot of banging on doors, paper being throwing about, and a mob of people,” the affidavit said. It added that Lyons described the people in the dream as not having “much choice of where they were going because of the mob.” He said that if he had been inside the Capitol, it would have been for about 45 minutes.

Lyons also showed the agents footage that was recorded inside the Capitol. When the agents asked if he would be willing to turn over the video to the FBI, Lyons said the file was too big to send over and offered to upload the videos to YouTube and email the links instead, the affidavit said.

“Hello Nice FBI Lady, Here are the links to the videos,” Lyons said in an email to an FBI special agent, the affidavit said. “Looks like Podium Guy is in one of them, less the podium. Let me know if you need anything else. Kevin Lyons.”

“Podium Guy” was a reference to Adam Johnson, another pro-Trump insurrectionist who was photographed carrying Pelosi’s lectern out of the Capitol. Johnson was later arrested, and the lectern was recovered.

The FBI’s affidavit said that the three videos Lyons sent featured footage of people inside and outside the Capitol and that Lyons’ voice could be heard in them.

In the interview with the FBI agents on January 8, Lyons gave a detailed description of travelling to Washington, DC, marching to the Capitol with the pro-Trump mob, entering the Capitol, roaming around the building, and entering the office of the “big boss.”

“Lyons was asked if this was a reference to Nancy Pelosi and he stated yes,” the affidavit said.

The FBI said that based on Lyons’ description of the events, it believed there was probable cause to charge him with violating a federal statute that prohibits people from knowingly entering or remaining in any restricted building or grounds without lawful authority to do so and with violating a federal law barring violent entry and disorderly conduct on Capitol grounds.

Lyons appeared before a judge after his arrest on federal charges this week and was released on a $US10,000 recognizance bond,the Chicago Tribune reported. His court-appointed lawyer, Lawrence Wolf Levin, did not make any remarks at the hearing. Levin did not immediately respond to a request for comment from Business Insider.