'Numbers don't lie': Fauci says you can't deny the US has the world's worst COVID-19 outbreak 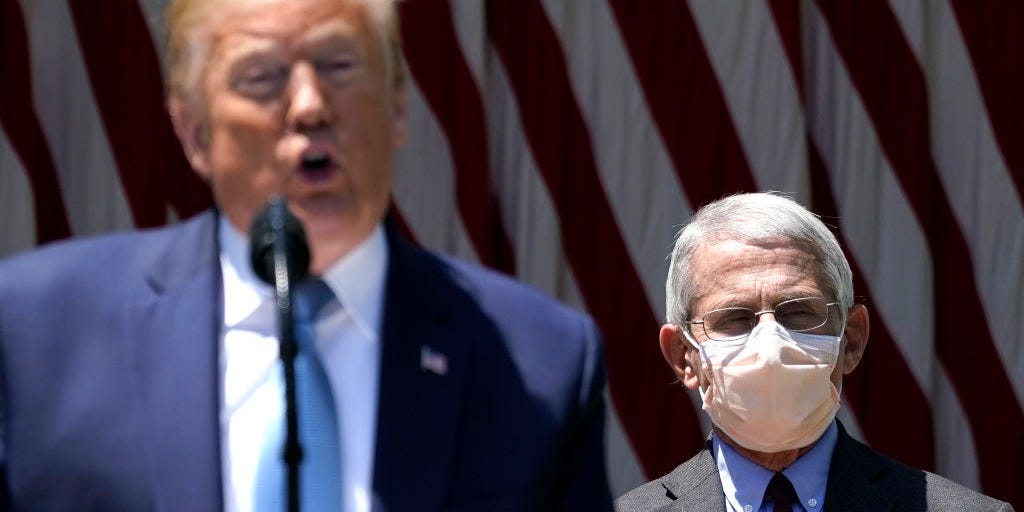 Drew Angerer/Getty ImagesPresident Donald Trump is flanked by Dr. Anthony Fauci, director of the National Institute of Allergy and Infectious Diseases while speaking about coronavirus vaccine development in the Rose Garden of the White House on May 15, 2020 in Washington, DC.

Dr. Anthony Fauci, the nation’s top expert on infectious disease, on Wednesday was unequivocal that the US coronavirus outbreak is the worst in the world.

“Yeah, it is quantitatively if you look at it, it is. I mean the numbers don’t lie,” Fauci said.

His words directly undercut the misleading and rosy picture President Donald Trump has sought to paint around the COVID-19 outbreak in the US, which is part of a broader effort to downplay his administration’s failures in responding to the pandemic.

“Every country has suffered. We, the United States, has suffered… as much or worse than anyone,” Fauci said on Wednesday. “I mean when you look at the number of infections and the number of deaths, it really is quite concerning.”

As of Wednesday, there were over 4.7 million reported cases of COVID-19 in the US, and nearly 158,000 deaths, per the latest data from Johns Hopkins. No other country in the world has higher numbers.

Fauci’s comments on Wednesday stood in stark contrast to Trump’s recent rhetoric on the US outbreak.

In a disastrous interview with Axios that aired Monday, Trump replied “you can’t do that” when his interviewer pointed out the US’s abysmal record on COVID-19 deaths per capita.

Swan: “Why can’t I do that?” pic.twitter.com/MStySfkV39

Trump has downplayed the impact of COVID-19 in the US from the start, which public health experts say contributed to the outbreak spiraling out of control across the country.

But the president is not changing course.

In comments on “Fox & Friends” Wednesday, Trump falsely said COVID-19 was spreading in a “relatively small portion” of the country, when the numbers show it’s spreading an an alarming rate all over.

Polling shows that Trump’s approval rating has plummeted amid the coronavirus pandemic. The president recently questioned why Fauci, who is on the White House coronavirus task force, has higher approval numbers than him.

“It sort of is curious: A man works for us, with us, very closely, Dr. Fauci and Dr. Birx also, highly thought of. And yet they’re highly thought of, but nobody likes me,” Trump said. “It can only be my personality, that’s all.”

Trump has often contradicted Fauci and behaved in a way that dismisses his expertise.