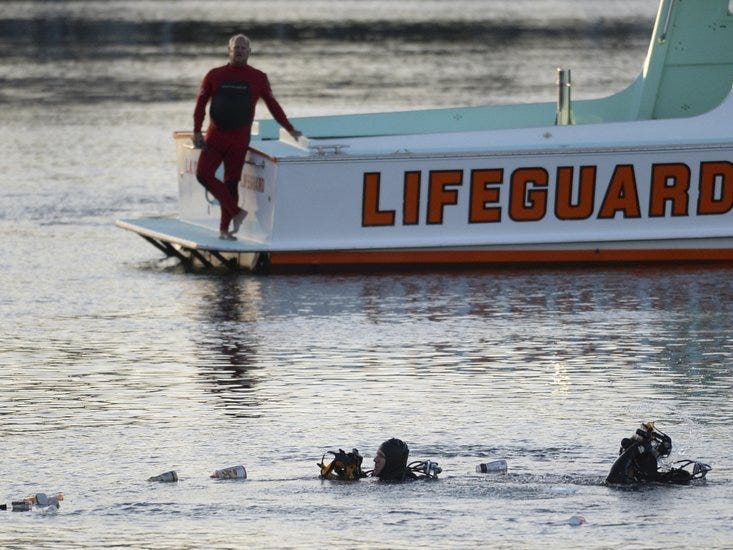 Steve McCrank/APIn this April 9, 2015, file photo, divers emerge from the water as debris believed to be from a car floats to the surface where a car went off a pier and into the water in Los Angeles’ San Pedro harbor district. A man accused of drowning two of his sons and trying to kill his ex-wife by driving them off a Los Angeles wharf to collect an insurance payout was sentenced Thursday, March 11, 2021, to 212 years in prison for fraud.

A California man was sentenced to 212 years in federal prison for intentionally driving his ex-wife and two disabled sons off an L.A. wharf, DOJ officials say.

Ali F. Elmezayen, 45, was sentenced by US District Judge John F. Walter on March 11, who called the crime an”evil and diabolical scheme.” Elmezayen was also ordered to pay $261,751 in restitution to the insurance companies that he defrauded, according to a release from prosecutors.

“He is the ultimate phony and a skillful liar…and is nothing more than a greedy and brutal killer,” Judge Walter said. “The only regret that the defendant has is that he got caught.”

On April 9, 2015, Elmezayen drove a car with his ex-wife and two youngest children off a wharf at the Port of Los Angeles. Investigators say he swam out the open driver’s side window of the car while his ex-wife, who did not know how to swim, escaped the vehicle and survived after a nearby fisherman threw her a flotation device.

Before the incident, Elmezayen bought from eight different insurance companies more than $3 million of life and accidental death insurance policies on himself and his family between July 2012 and March 2013.

After purchasing the policies, Elmezayen repeatedly called the insurance companies – sometimes pretending to be his ex-wife in – to verify that the policies were active and that they would pay benefits if his ex-wife died in an accident.

He also called at least two of the insurance companies to confirm they would not investigate claims made two years after the policies were purchased. These telephone calls were recorded and were played for the jury.

After the incident, Elmezayen collected more than $260,000 in insurance proceeds from Mutual of Omaha Life Insurance and American General Life Insurance on the accidental death insurance policies he had taken out on the children’s lives. He used part of the insurance payout to purchase real estate in Egypt as well as a boat.

According to the Department of Justice, Elmezayen repeatedly lied to law enforcement officers and insurance companies, and in subsequent civil litigation he filed concerning the crash – including the extent of the insurance he had purchased on his family and whether he had insured his disabled children’s lives. He also attempted to persuade witnesses to lie to law enforcement and say he had given the insurance proceeds to charity.

“Today Ali Elmezayen was held accountable for his actions, which directly led to the tragic death of his two sons. It is unthinkable that any father would jeopardize the lives of his family for his own financial gain,” said Special Agent in Charge Ryan L. Korner of IRS Criminal Investigation in the press release. “IRS-CI is proud to work alongside our law enforcement partners to help bring some closure to this horrifying scheme.”