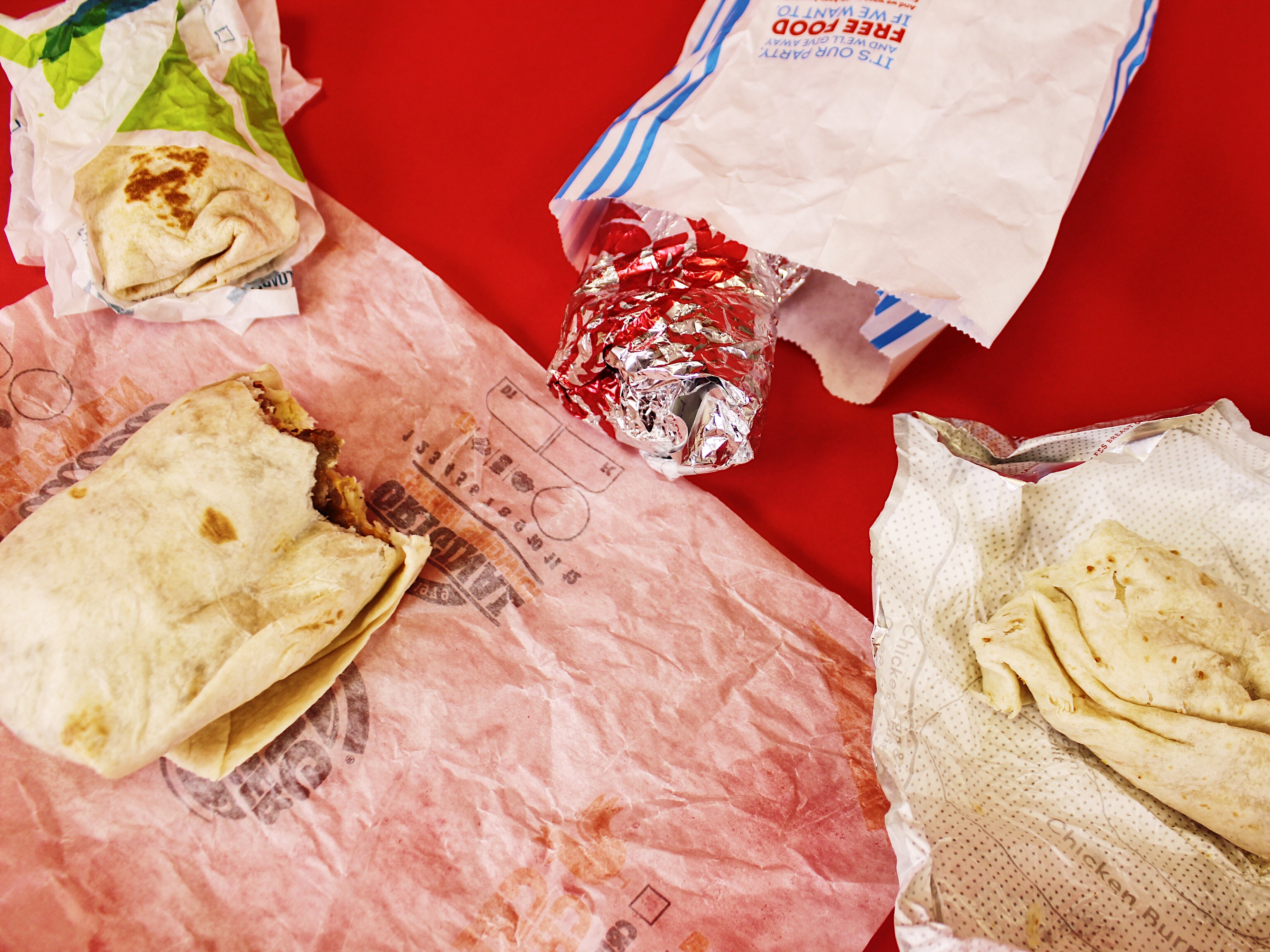 Ask any fast-food breakfast lover, and they will tell you that you simply can’t go wrong with a breakfast burrito.

However, not all breakfast burritos are created equal. While some are stocked full with fluffy eggs, crispy hash browns, hearty sausage, or perfectly salty bacon, others simply fall short with artificial-tasting cheese and limp tortillas.

In an attempt to find the very best fast-food burrito, I put McDonald’s, Wendy’s, Burger King, Chick-fil-A, and Taco Bell to the ultimate test.

While each burrito had something different to offer, I found all of the Taco Bell breakfast burritos I tried to be exactly what you would want for an on-the-go breakfast. The eggs were fluffy, the meat was flavorful, and the prices simply couldn’t be beaten.

Here’s a breakdown of every breakfast burrito that I tried, and how they ranked from worst to best according to taste and value.

MCDONALD’S: The least expensive breakfast burrito was also the least exciting in my opinion. When I opened up the bag, my first impression was that the burrito was small.

The McDonald’s sausage burrito didn’t look any more inviting once I removed it from its paper wrapping. The tortilla was small and thin. However, at just $US1.99, it didn’t exactly break the bank.

The cheese tasted artificial to me, and it was thick and overpowering. 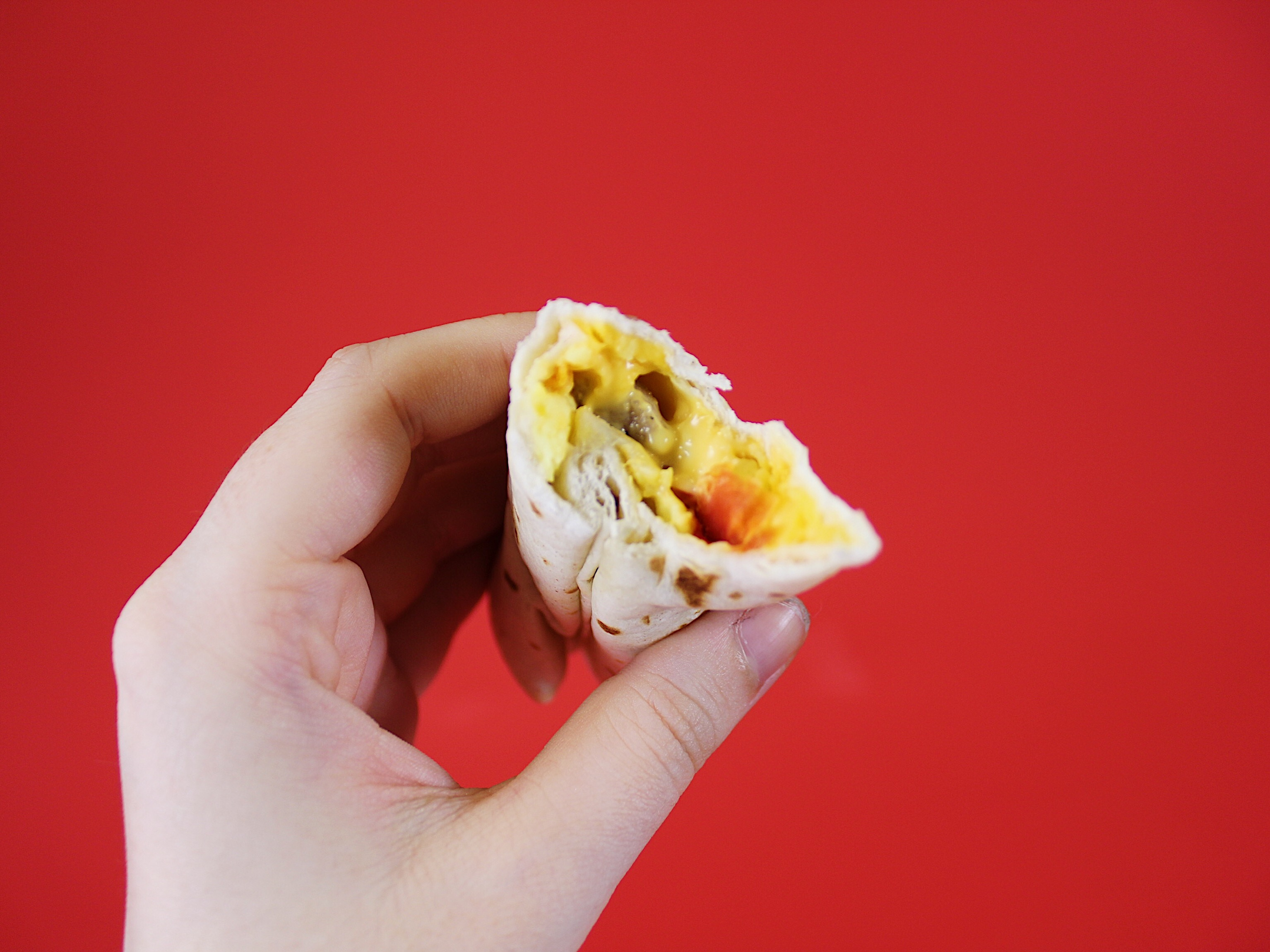 The flavour of the eggs and sausage didn’t come through because both were covered in potent, gooey cheese.

WENDY’S: I had high hopes for Wendy’s breakfast burrito. 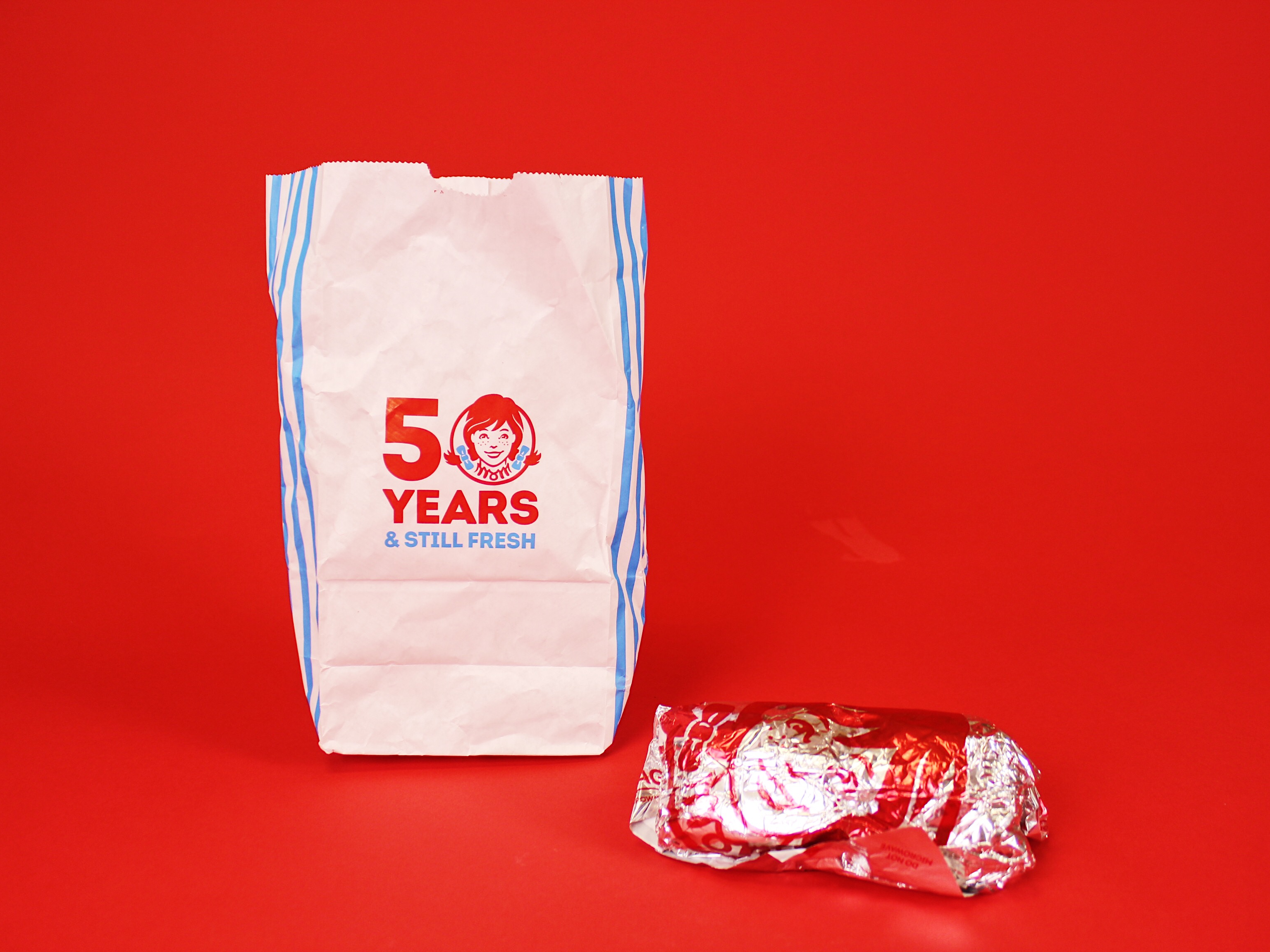 These hopes were quickly dashed to pieces before my eyes, however. While the chain usually impresses me, I thought its $US1 breakfast burrito left a lot to be desired.

Wendy’s sausage, egg, and cheese burrito was exactly what you would expect from a fast-food breakfast burrito — nothing more and nothing less. Unfortunately, the tortilla was soggy by the time I began eating. It definitely looked less than appetizing.

The eggs were watery and bland, and I thought the amount of sausage inside the burrito was stingy. 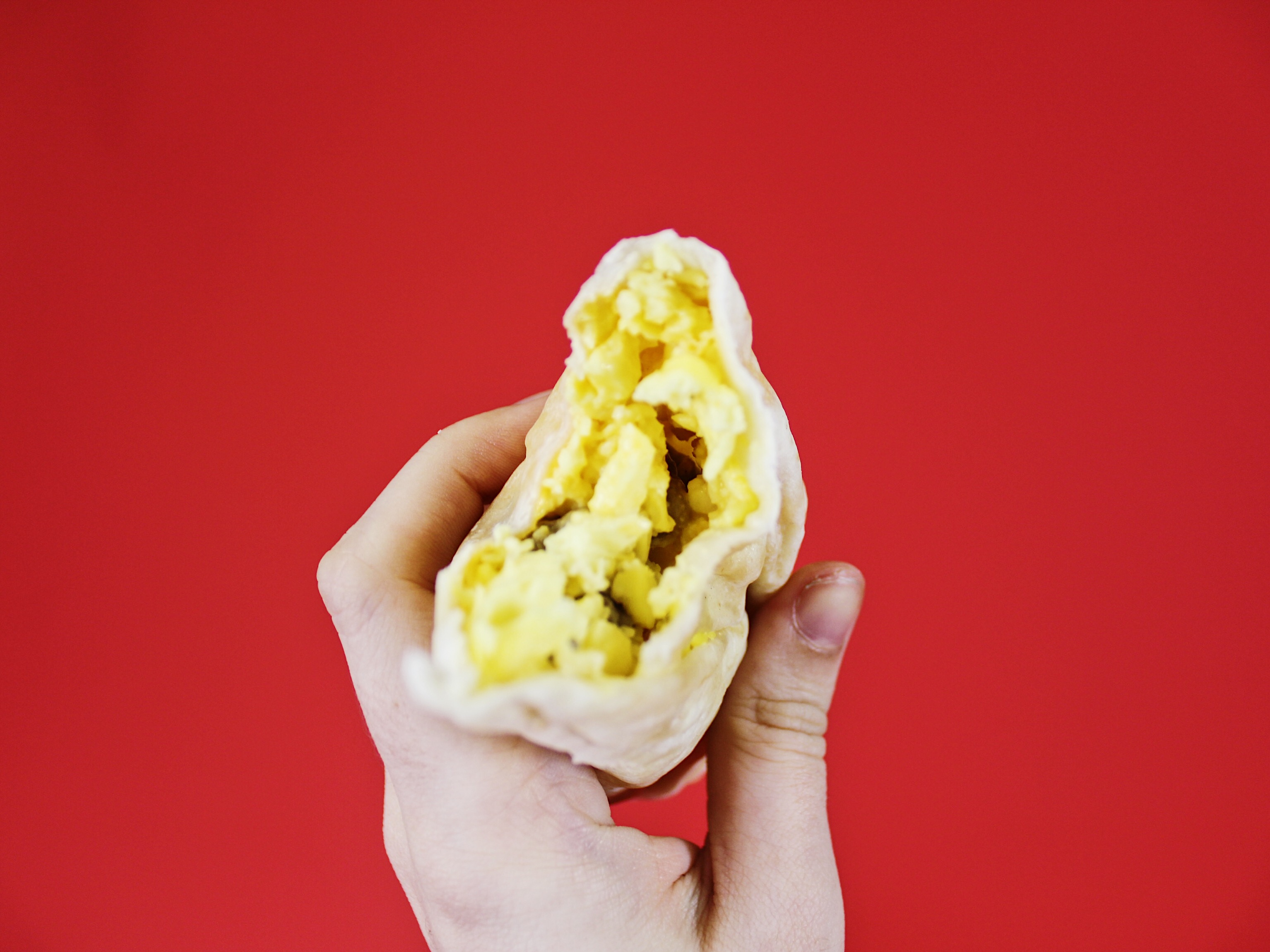 Overall, I wasn’t impressed by the lack of flavour or the tortilla’s texture.

BURGER KING: Coming in third place in the breakfast burrito face-off was Burger King with its Egg-Normous Breakfast Burrito. 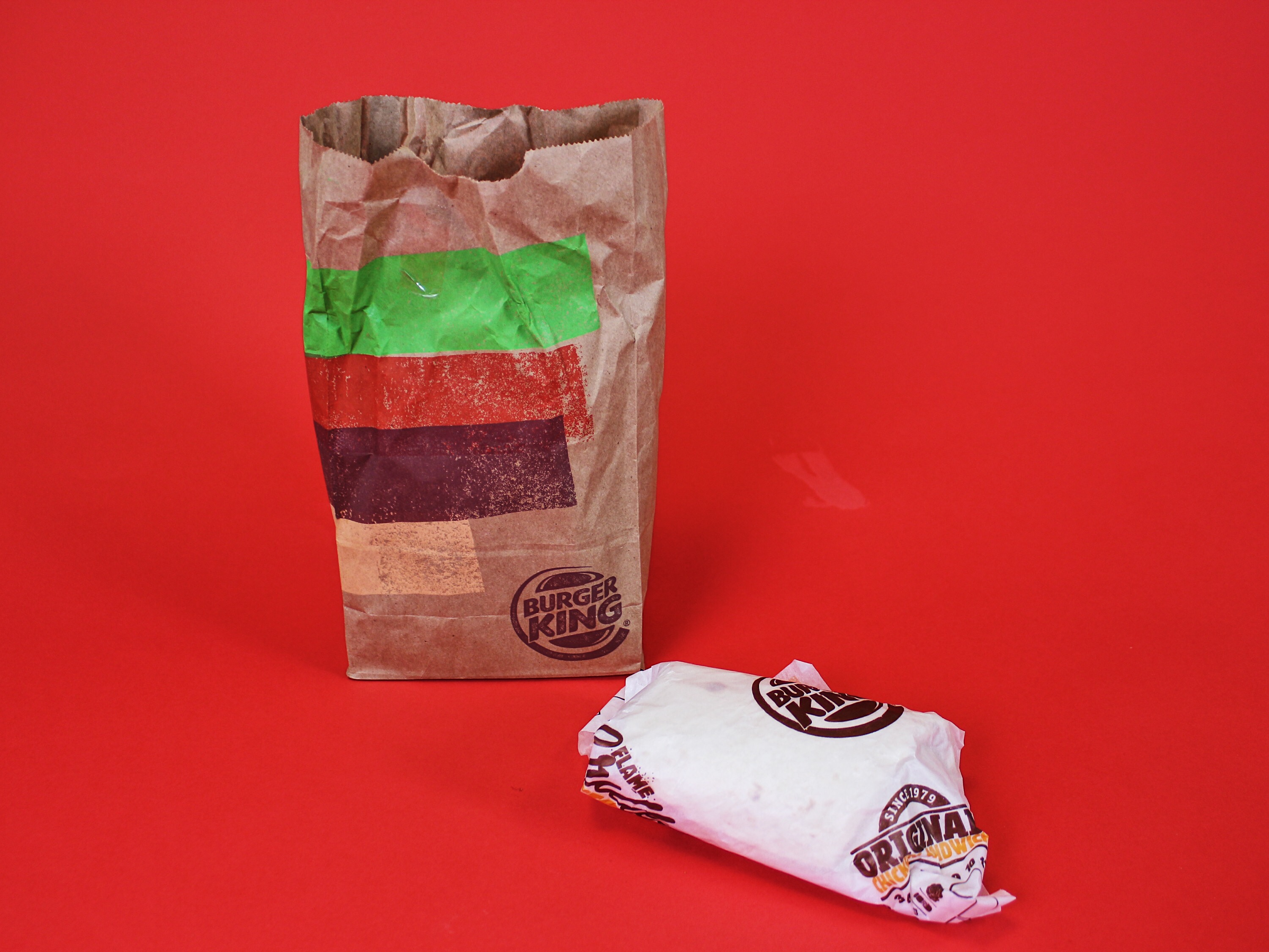 I made the grave mistake of spying how many calories the burrito has – a whopping 910 – when I ordered this.

The burrito cost me $US4.99 before tax, making it the second-most expensive burrito I tried. However, when I saw the size and thickness of the burrito, I couldn’t help but get a little excited.

Inside, I found the holy trinity of breakfast foods — cheese, bacon, and sausage patties. Erin McDowell/Business InsiderThe inside of the Burger King breakfast burrito.

I was conflicted about the chain’s choice to include two whole sausage patties, rather than ground sausage.

I loved the taste at first, but I thought it quickly became fatty-tasting. The bacon was crispy, and I thought the full-sized hash browns were a nice addition. It did need an extra kick from salsa or hot sauce, however.

CHICK-FIL-A: When I learned about Chick-fil-A’s hash brown scramble burrito with nuggets, it felt like a defining moment in my love affair with fast-food. The burrito costs $US5.09 and was the most expensive burrito in the lineup. It also comes with jalapeño salsa on the side.

The crispy, juicy nuggets were a not-so-surprisingly great addition to the burrito, and the eggs tasted homemade. 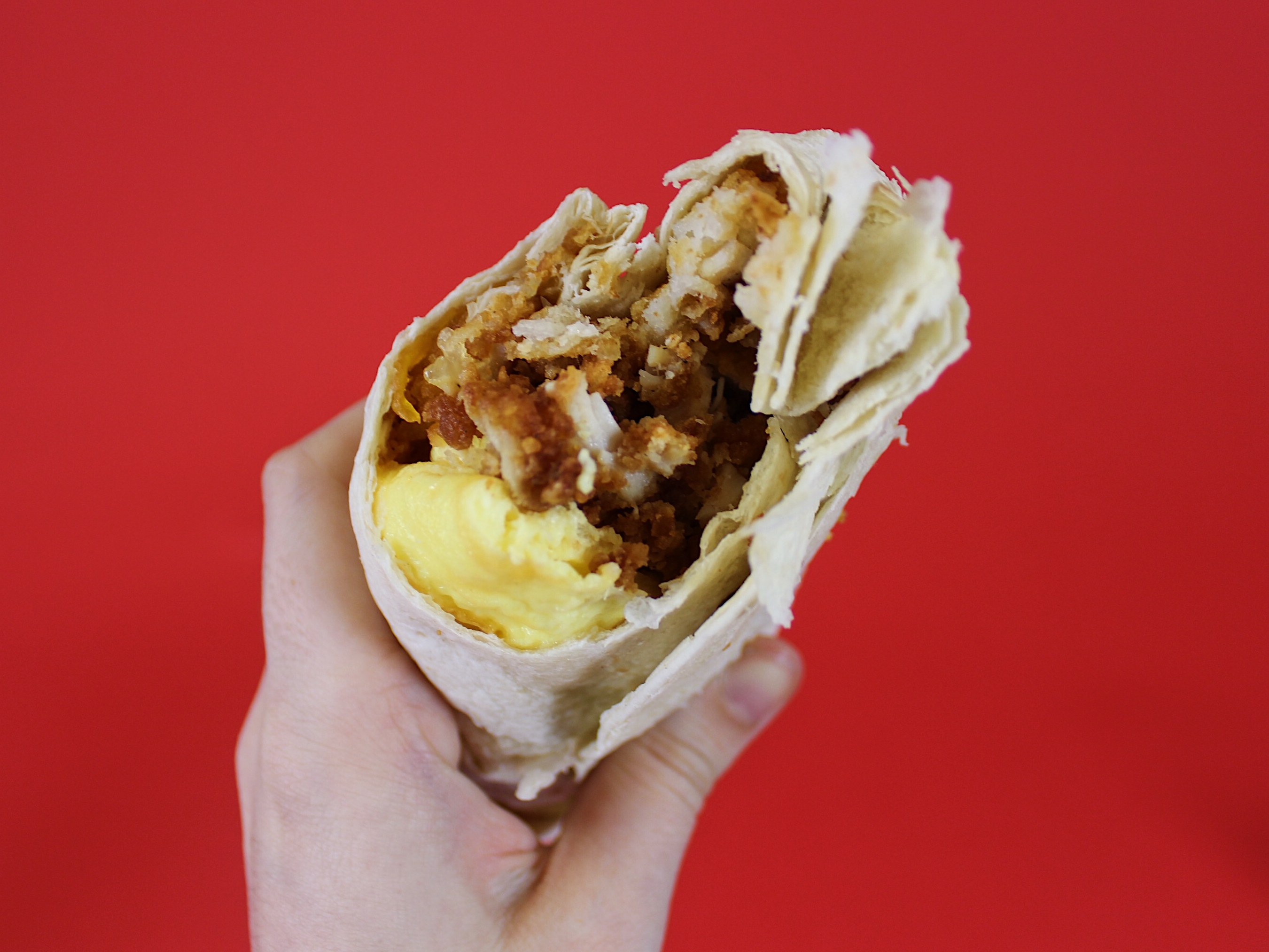 I added the jalapeño salsa, which brought the burrito to a whole other level. However, while the burrito was delicious, I was unsure about whether it was worth more than $US5.

TACO BELL: Taco Bell reigned supreme with its lineup of breakfast burritos, which were both an incredible value for the money and tasted undeniably delicious. The grilled burrito was thick and perfectly grilled. 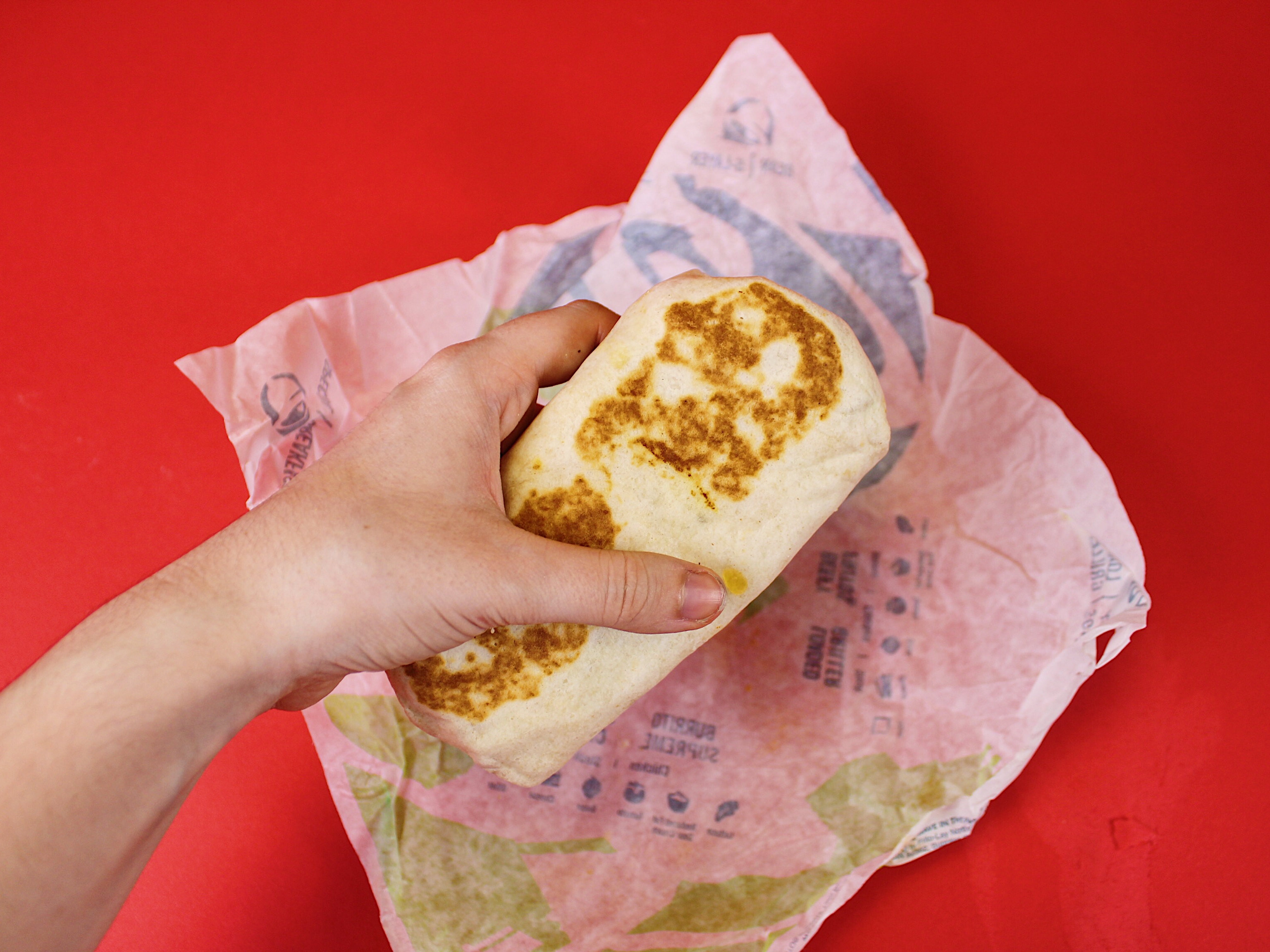 The tortilla was thick enough to hold everything together and still retain its softness.

I ordered the bacon version of the grilled burrito. The bacon was extremely flavorful and tasted straight off the skillet. The meat was balanced out perfectly by the fluffy eggs.

For only $US1, this breakfast burrito was the best value out of every burrito I tried.

The next burrito I tried from Taco Bell was just as inexpensive — the cheesy toasted breakfast burrito cost me just $US1 plus tax. 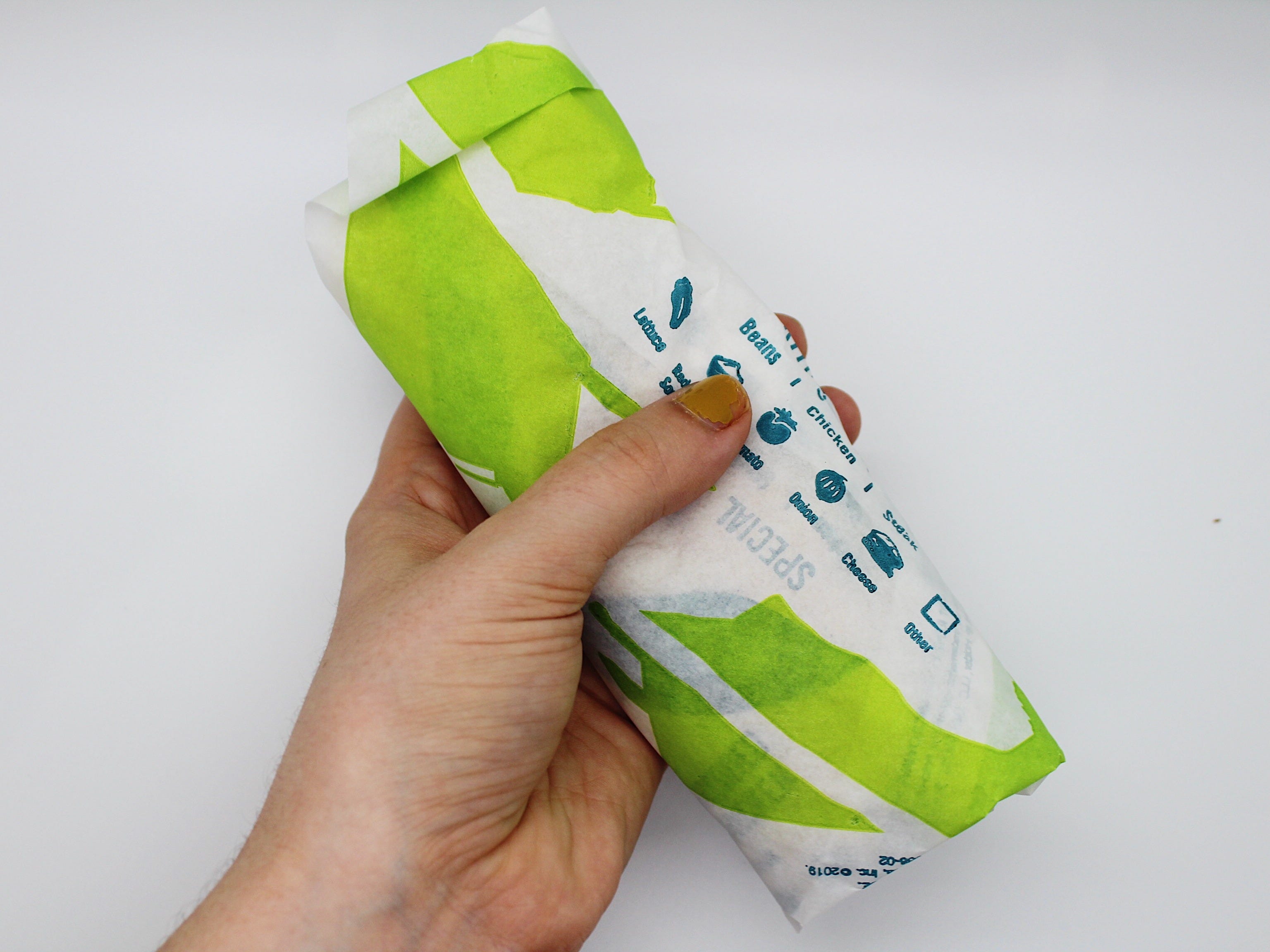 The burrito is one of Taco Bell’s newest additions to its breakfast menu.

It’s about the same size as the grilled burrito but is toasted instead of grilled. 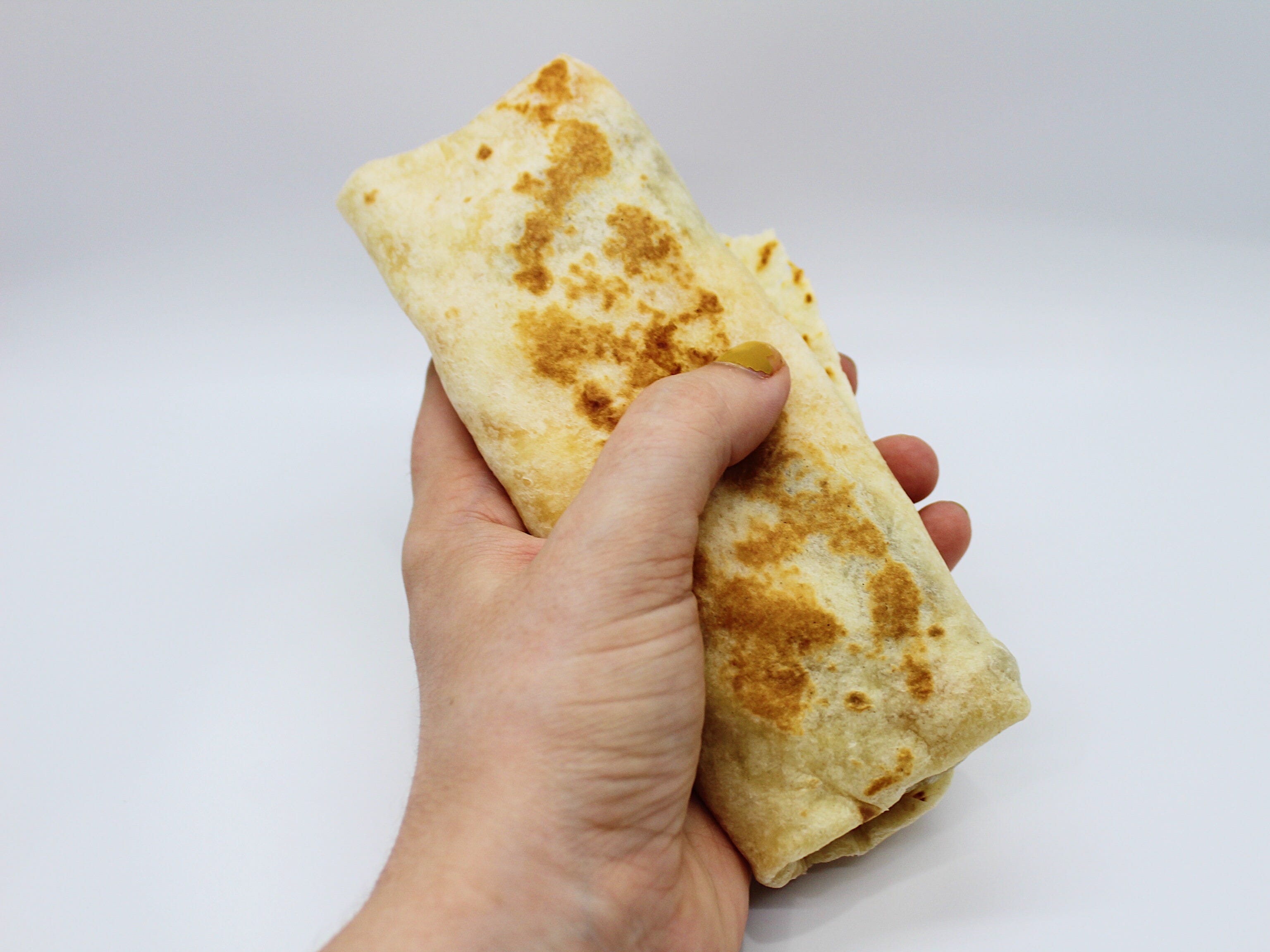 Biting in, I was met with a hearty serving of sausage and cheese. 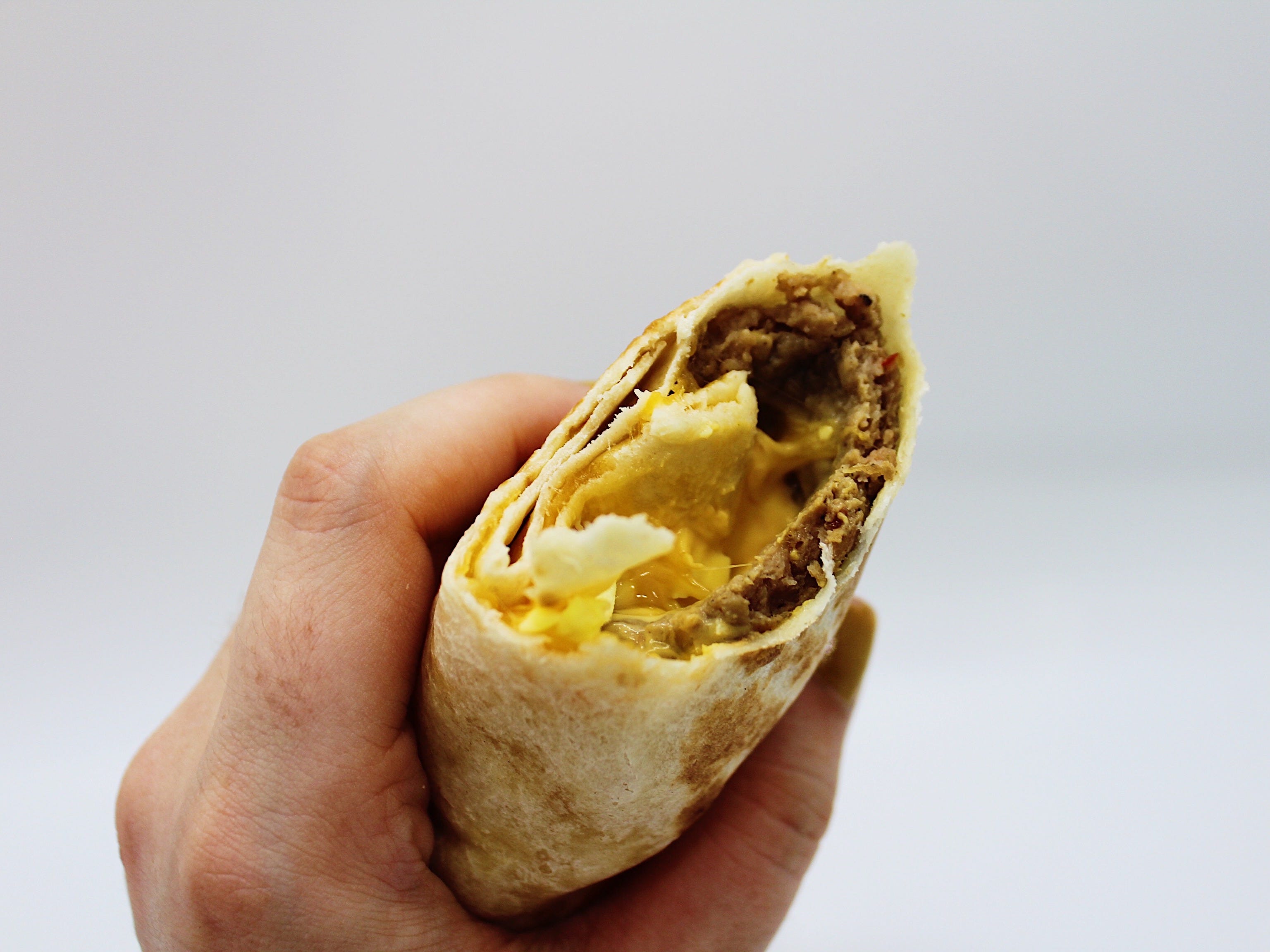 My burrito came with a sausage patty, rather than sausage crumbles as advertised. I actually didn’t mind this substitution.

This burrito isn’t called the “cheesy toasted breakfast burrito” for nothing — it was really, really cheesy. 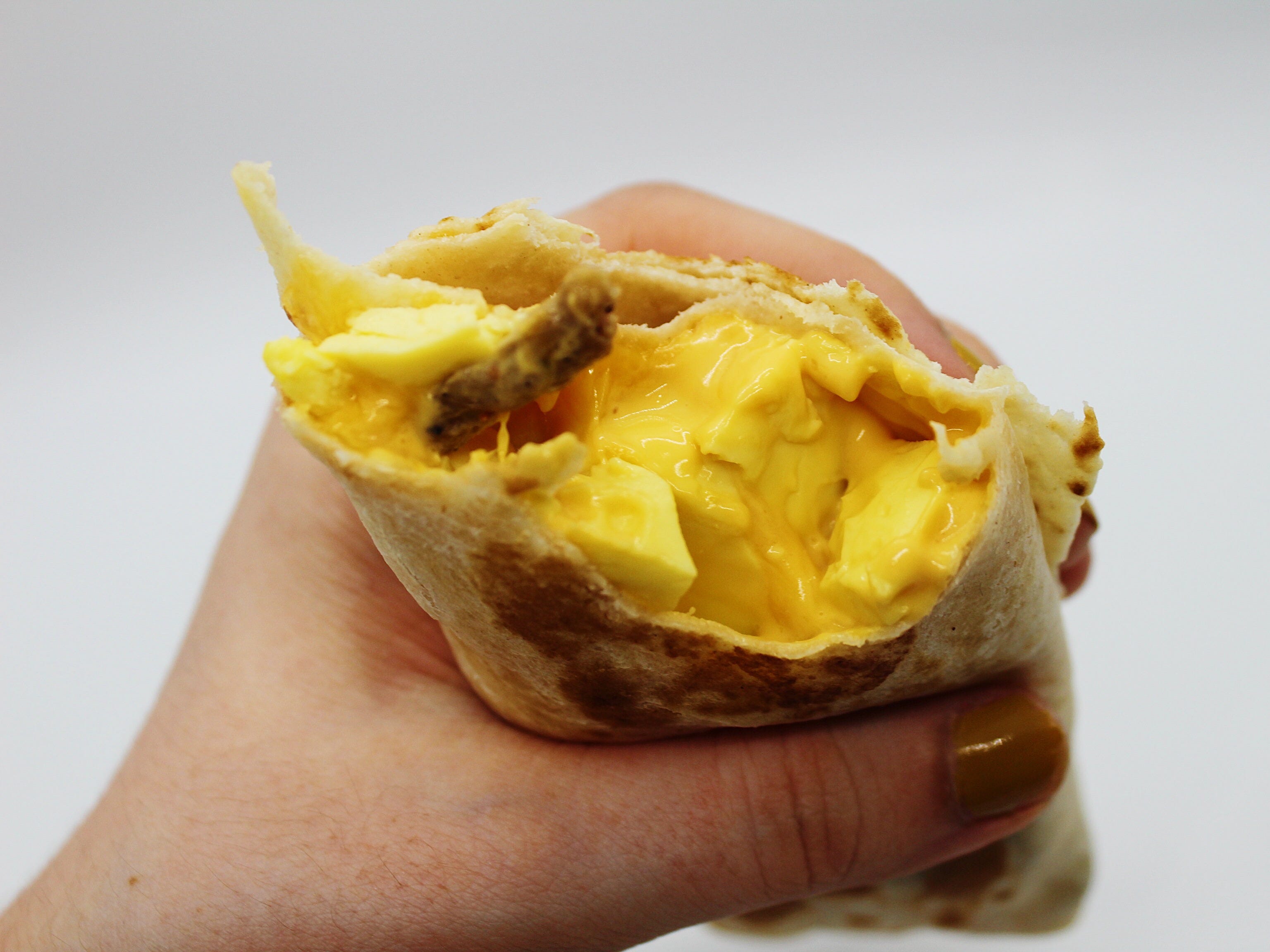 The cheese sauce was a lot to take on – especially first thing in the morning. However, it was still undeniably delicious.

The breakfast version of Taco Bell’s famous Crunchwrap cost me $US2.79 at the location I went to — and I thought it was well worth it. 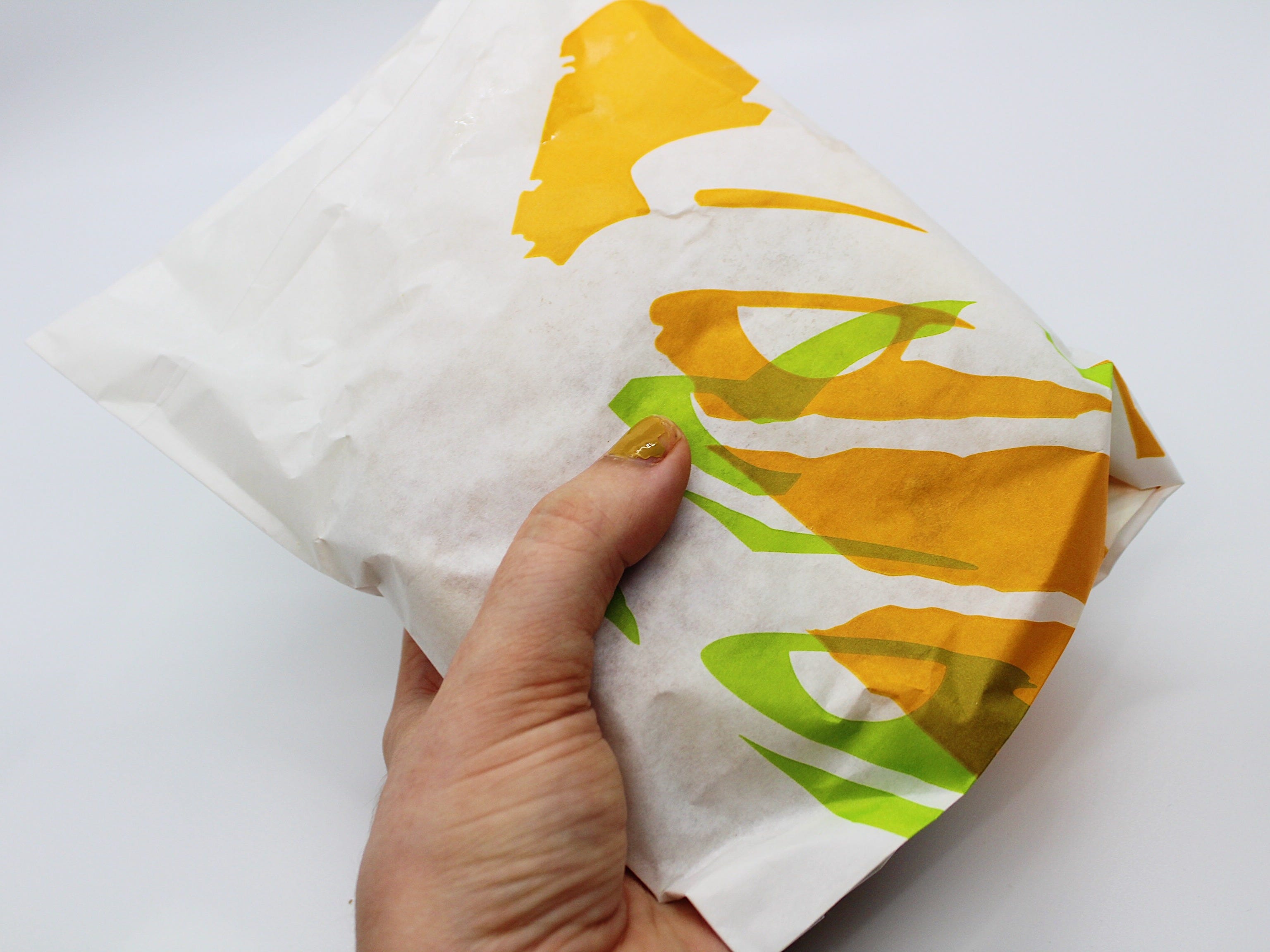 It comes with bacon, a hash brown, cheese, egg, and creamy jalapeño sauce.

Some will argue with me that a Crunchwrap isn’t a burrito. 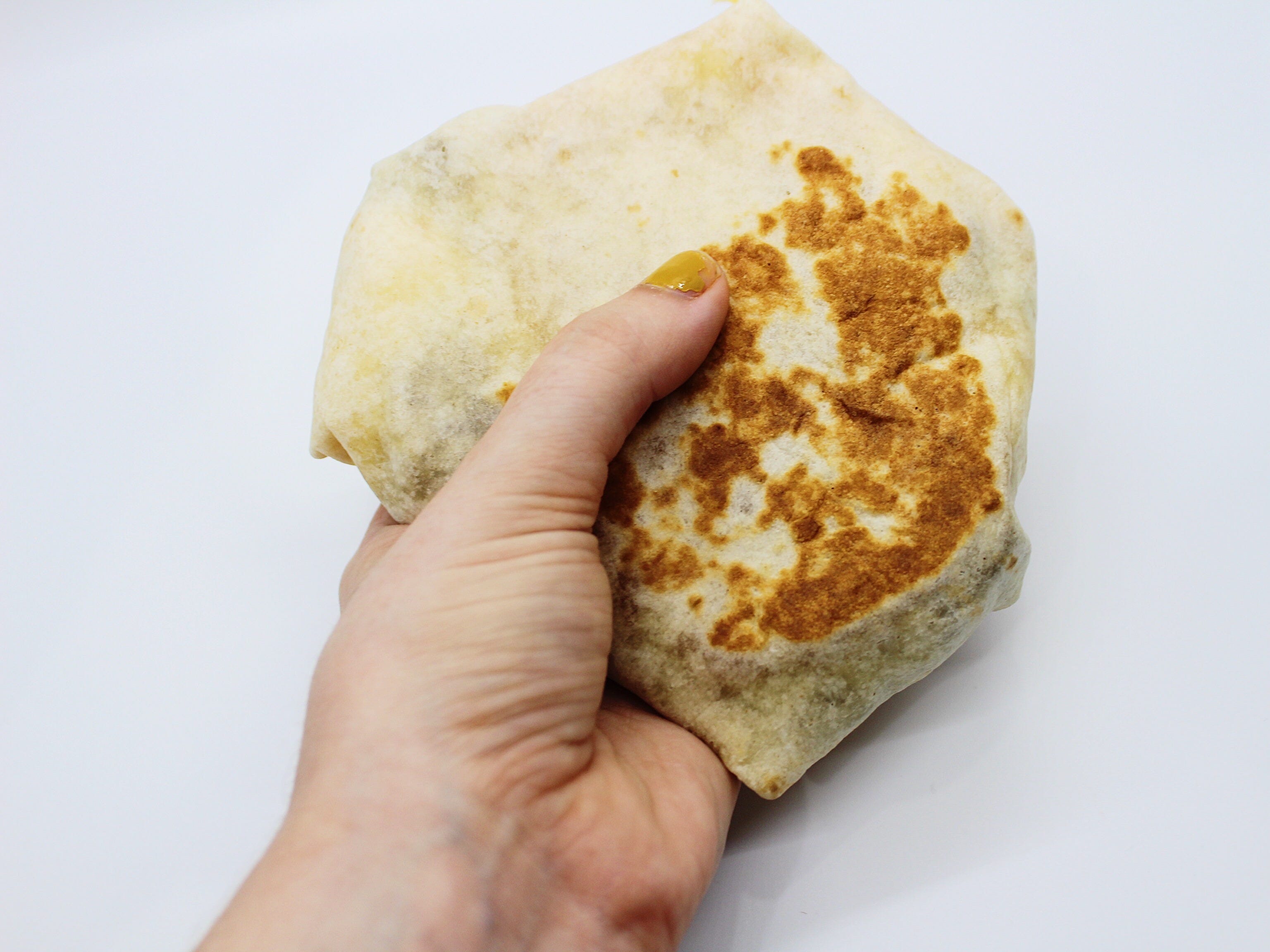 To this I say, it’s not about the shape – it’s about the ingredients. In this case, a perfectly grilled tortilla stuffed with goodness definitely counts as a burrito.

Biting in, I was satisfied with the hash brown and other ingredients. 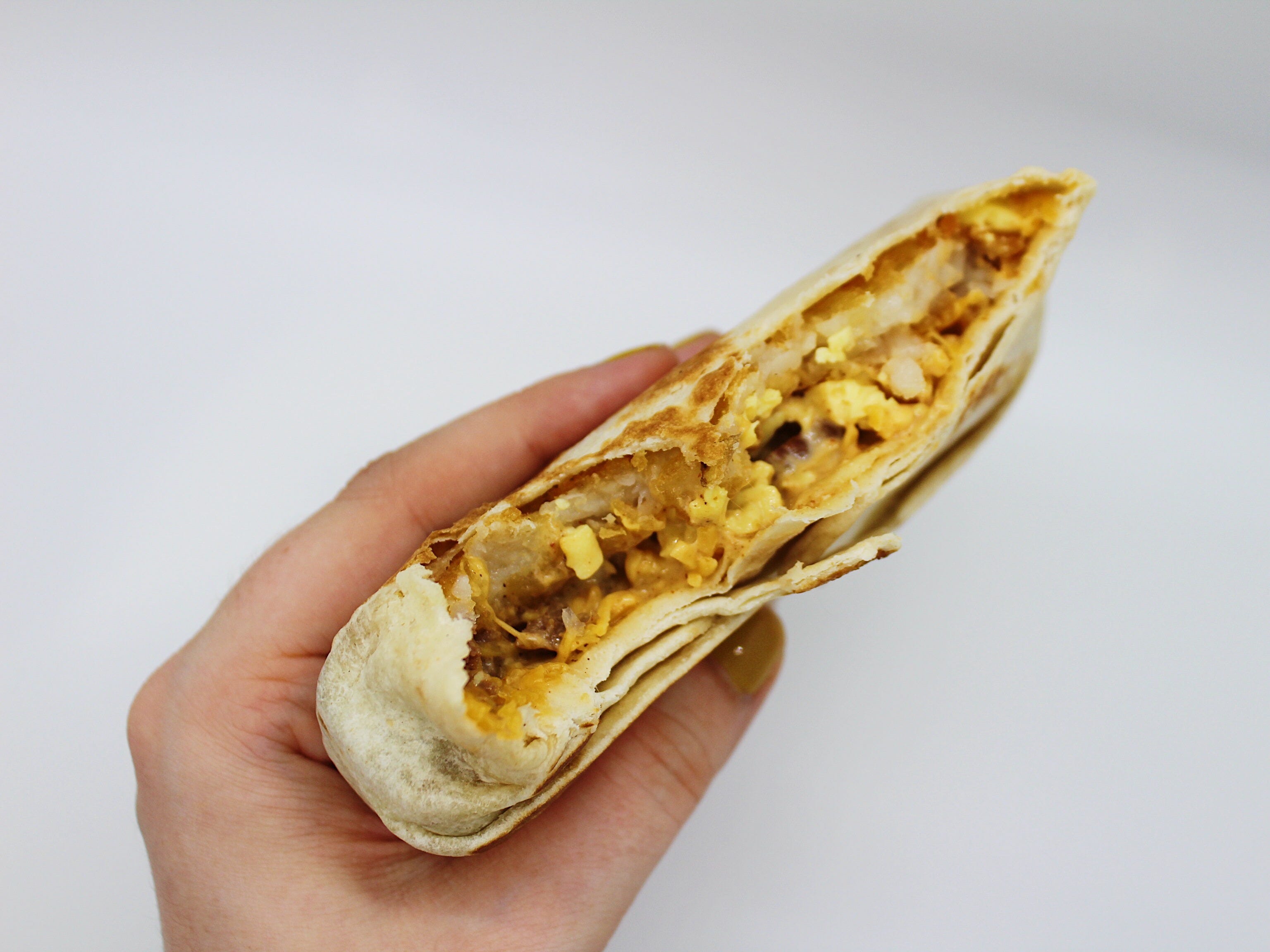 I thought the bacon was super flavorful, the eggs were moist, and the hash brown was perfectly seasoned. It had a slight kick to it, and with a drizzle of Taco Bell’s breakfast salsa, I was well on my way to having the perfect fast-food breakfast.

Up next, I tried the Taco Bell Grande Scrambler burrito with sausage. It was larger than the grilled and toasted burritos, but it still only cost $US2.99.

The eggs were fluffy and moist, without being watered down, and the addition of sour cream and nacho cheese sauce gave the burrito a hint of tanginess. Crispy hash browns added a different texture element that brought the burrito together. The sausage was hearty and filling.