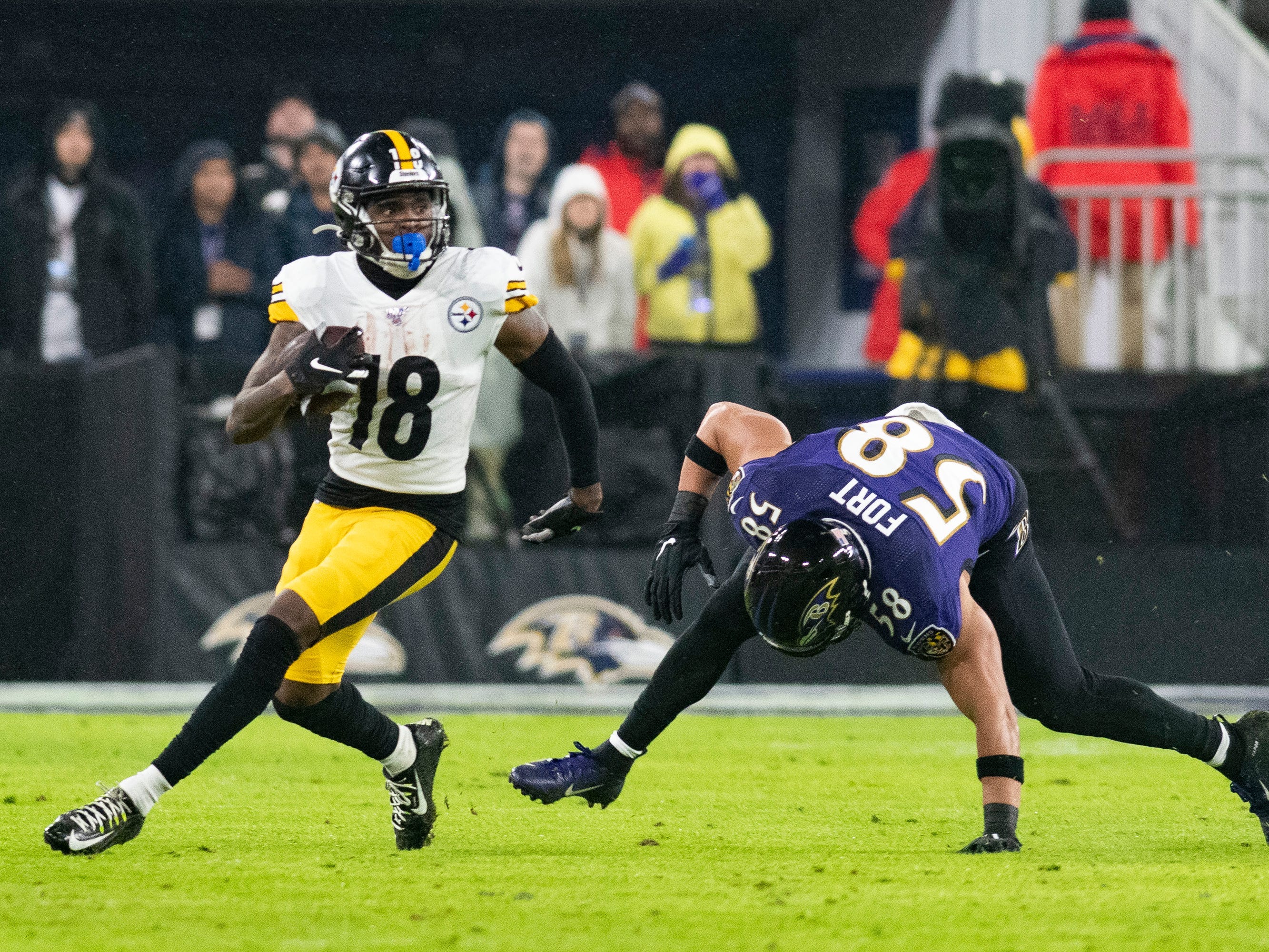 After one of the strangest off-seasons in NFL history, Week 1 of the 2020 season is upon us, and with it comes fantasy football.

Drafting a fantasy team was a daunting task this year, given that the league’s abridged training camp and lack of preseason left fantasy players with far less information than they’re used to.

Still, teams have been built, and now we’re on the cusp of the opening fantasy matchups of the year.

Below are Insider’s picks for who to start and sit in Week 1 of the fantasy season. This list isn’t meant to be a complete and final determination when you set your lineup. Instead, consider it a guidepost to help you navigate a tough decision or pick a player for your daily fantasy lineup. 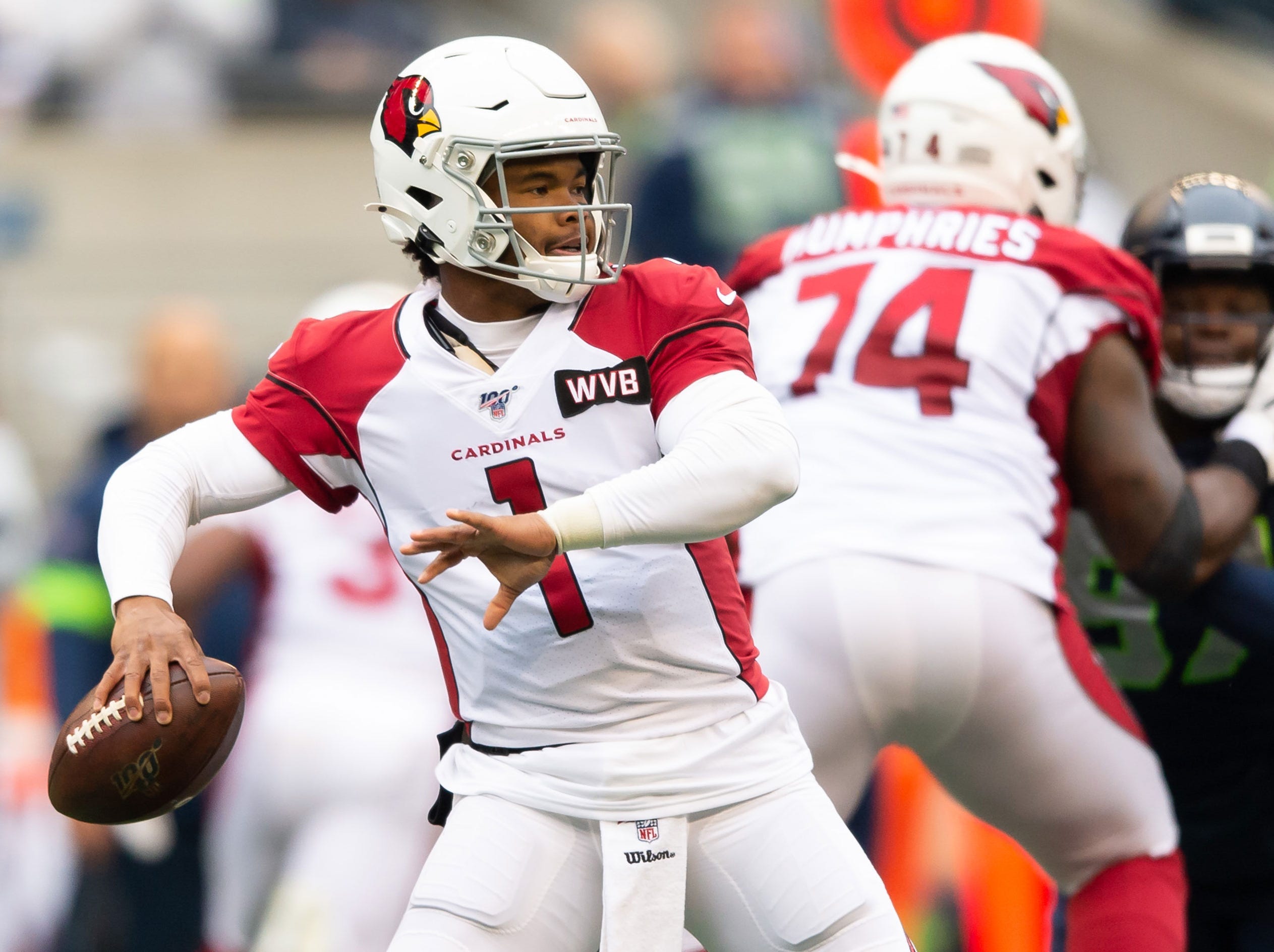 Why you should start him: The Arizona Cardinals are not afraid to pass the ball. Last year, in his first-ever NFL start, Murray threw 54 pass attempts against the Detroit Lions, completing 29 of them for 308 yards, two touchdowns, and one interception. The game ended in an overtime tie.

With the addition of wide receiver DeAndre Hopkins, the Cardinals are going to be looking to air it out all the more more. Although the 49ers defence should be a tough test for the young quarterback, fantasy football is about volume, and Murray should get plenty of chances to throw on Sunday. 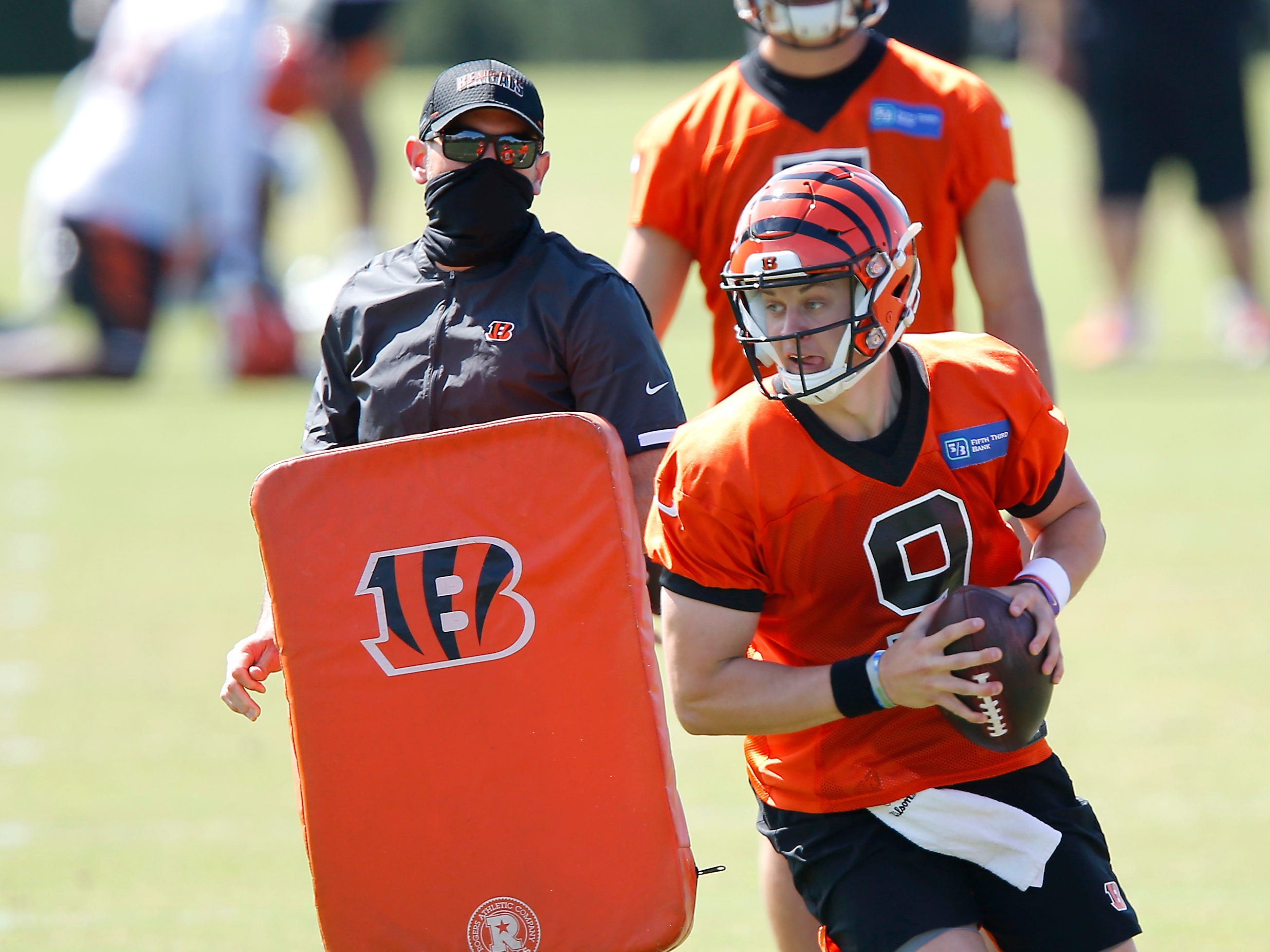 Why you should sit him: Burrow is a great player, and he’s probably got a long, successful career ahead of him. But on Sunday, Burrow is facing a front four of Chargers defenders that includes Marvin Ingram and Joey Bosa, both of whom will be eager to welcome the young rookie to the league. Plus, the Bengals offensive line isn’t exactly the most protective in the league. Even with all the talent and weapons at Burrow’s disposal, he’s likely to face an uphill battle in his first start. 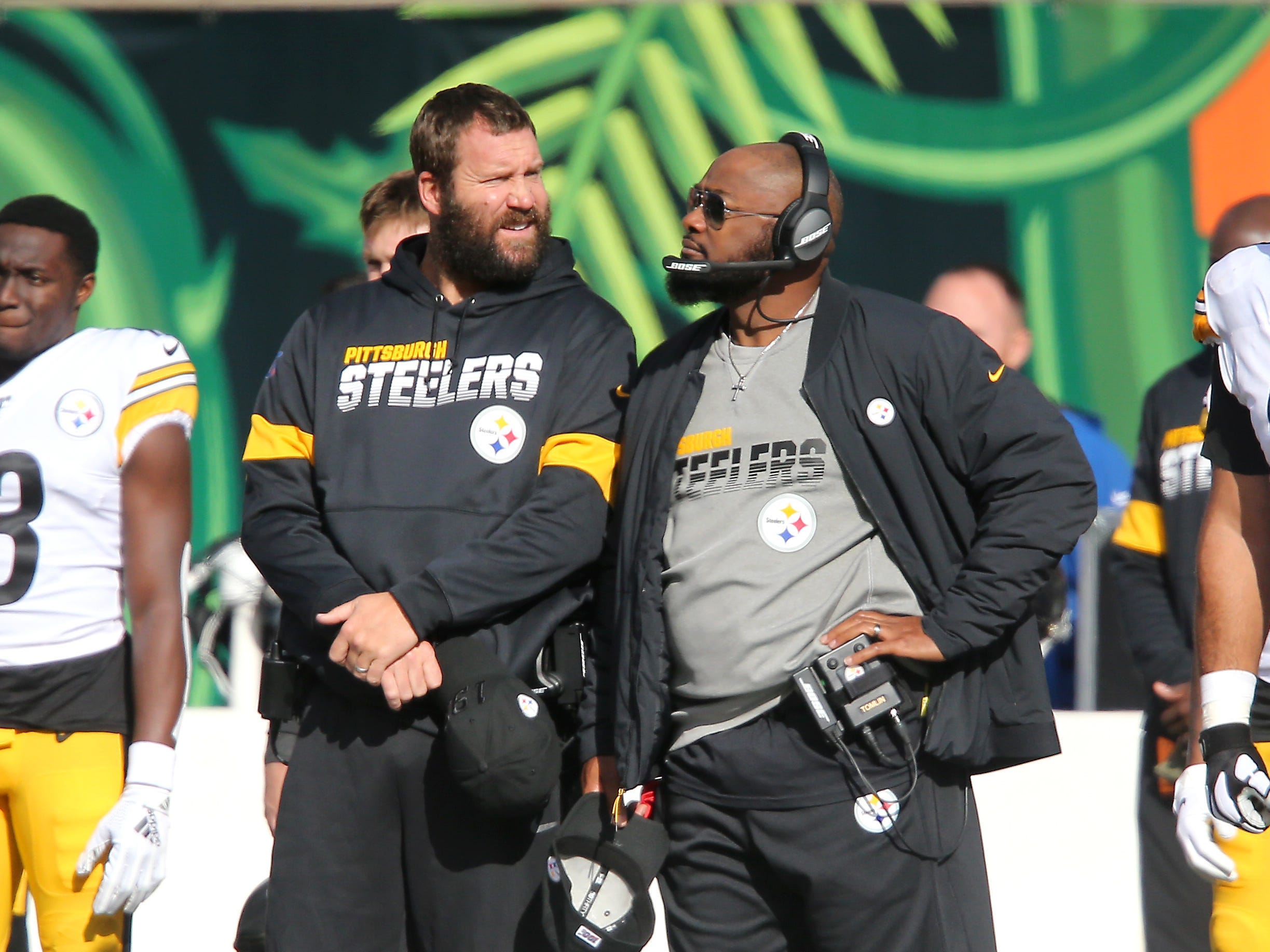 Why you should start him: Roethlisberger is coming off a missed season due to injury. But the year before, he led the league in passing with 5,129 yards. If he has a fraction of that talent left in his 38-year-old arm, he should be able to shred the Giants defence on Monday night. Why you should sit him: Stafford seems poised for a potentially big year – and he knows it. Stafford’s former teammate Nate Burleson revealed on “Good Morning Football” that Stafford told him over the summer that he’d be gunning for MVP.

But sometimes big expectations can work against you, especially early in the season. Stafford has the talent to be an MVP contender, but in week 1 against the Bears defence, the colossal expectations Stafford has for himself could lead to some disappointed fantasy players. 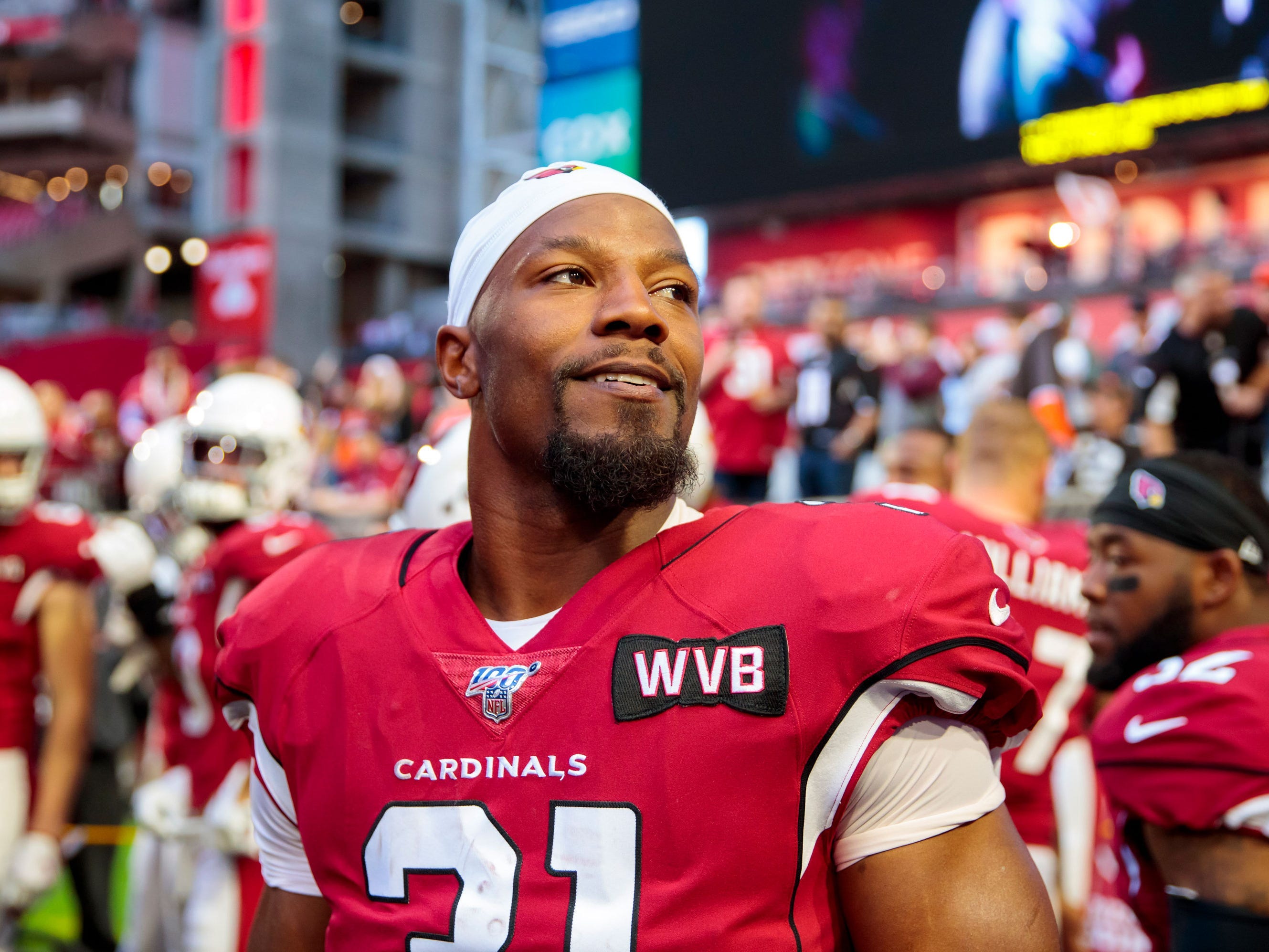 Why you should start him: Johnson spent the off-season hearing he was a throwaway piece in the trade that moved superstar wide receiver DeAndre Hopkins from Houston to Arizona. Meanwhile, Texans head coach and de facto general manager Bill O’Brien spent the off-season hearing that it was a stupid decision to trade Hopkins for Johnson and a paltry return of draft picks.

So both men have plenty to prove on Thursday night: O’Brien should be more than motivated to get Johnson involved in the offence, and Johnson will likely be eager to make the most of his touches. 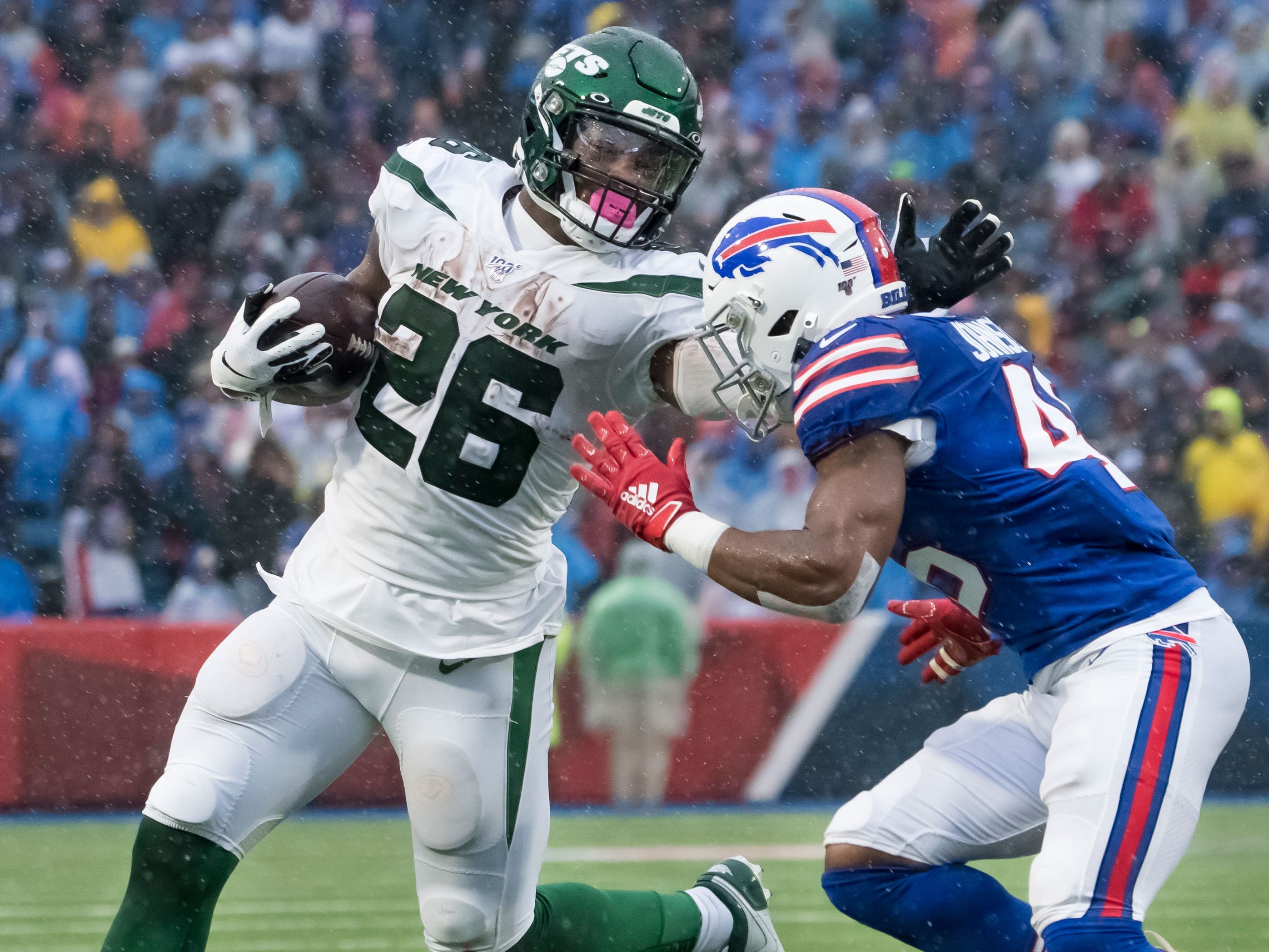 Why you should sit him: The Jets could be a mess heading into the start of the season. The relationship between Bell and head coach Adam Gase has always been rocky, and going up against the Buffalo Bills defence to start the year is a tough challenge.

Chances are, you don’t have two running backs in your lineup better than Bell, so proceed with caution before benching him for good – just be prepared to temper your expectations. 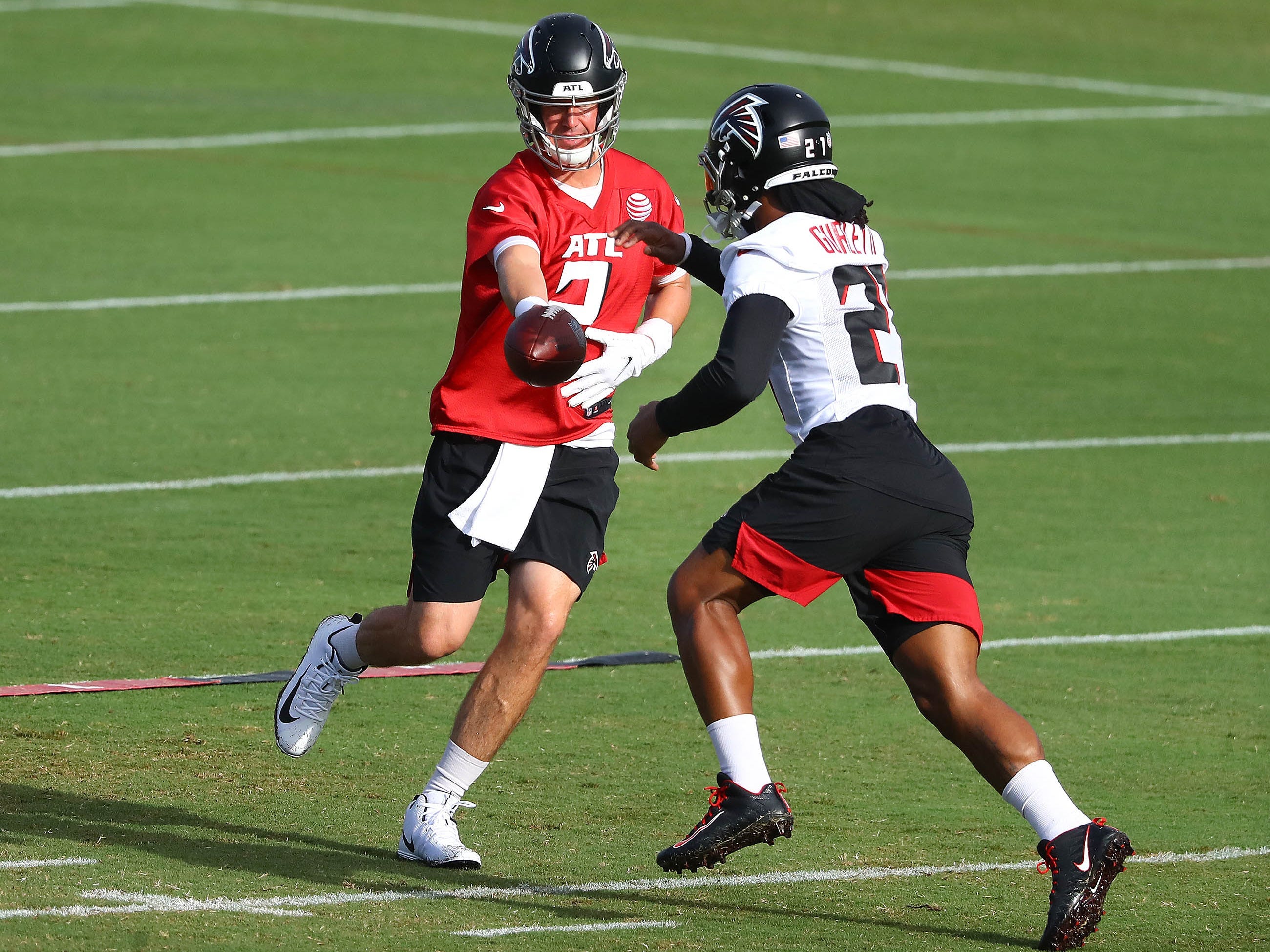 Why you should start him: Similar to the situation with Johnson and the Houston Texans, Gurley joins the Atlanta Falcons with plenty to prove. Two years ago, he had one of the most productive running-back seasons in the history of football, so he should have plenty of opportunity to show what he’s got left in the tank when facing the Atlanta offence. Why you should sit him: The Lions running-back situation, like Kerryon Johnson in the picture above, has been flipped on its head. At first, it seemed likely to be a relatively even split between Johnson and rookie D’Andre Swift out of the Lions backfield. But the late addition of veteran Adrian Peterson tossed those expectations out the window.

Johnson is still likely to have good value this year, but until we have a better idea of how carries are going to be distributed in Detroit, you might have a better option on your bench – a player who you can be more confident will get a decent chunk of the workload. 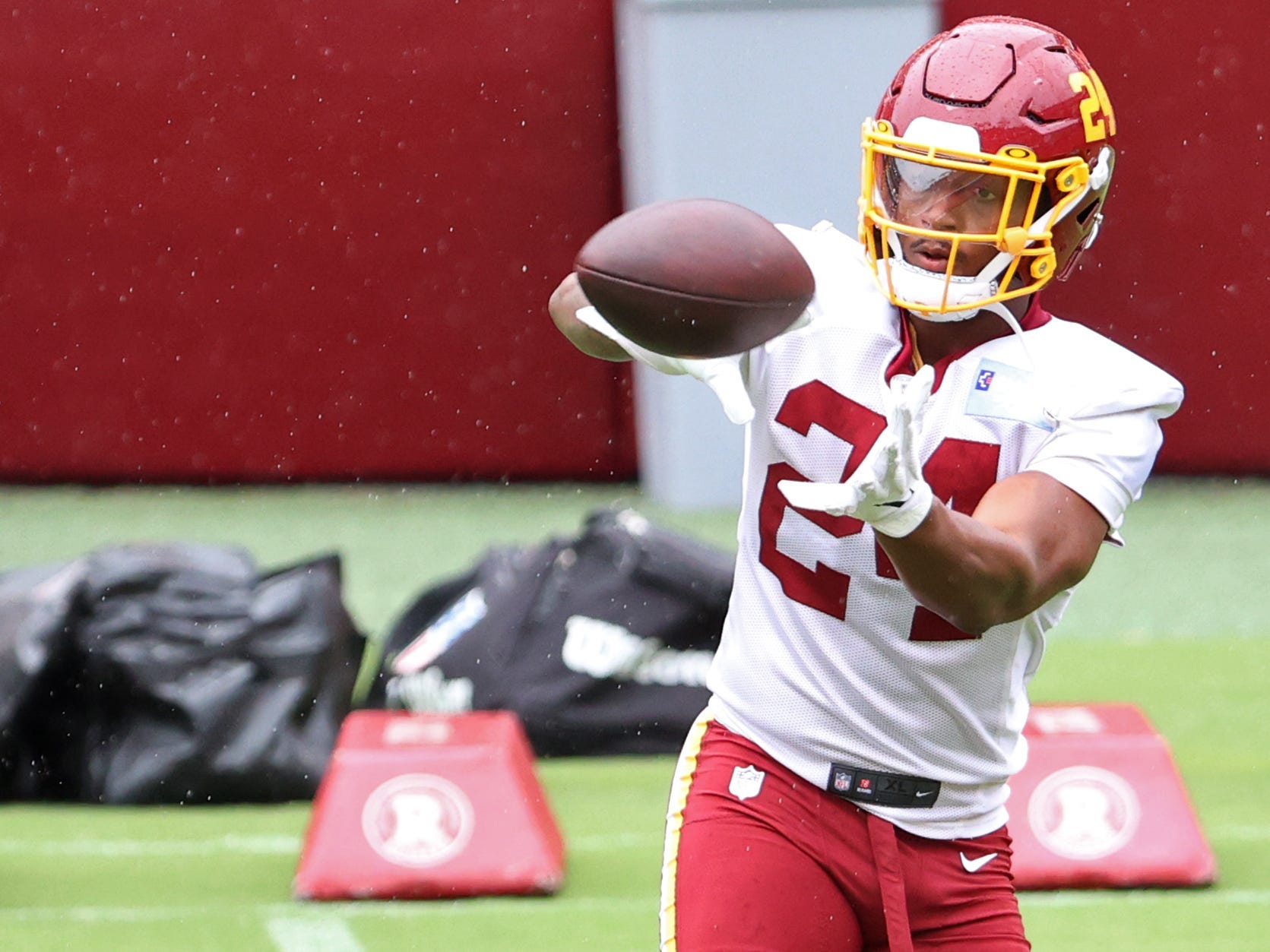 Why you should start him: Gibson’s path to NFL running back was odd: In college, he played more as a wide receiver and return man than as a running back. But Washington seems to like his skills out of the backfield enough to ship off Adrian Peterson in favour of Gibson and fellow Washington back J.D. McKissic.

It’s tough to predict the workload Gibson is going to get in Week 1, but there’s potential for a breakout game against a division rival. 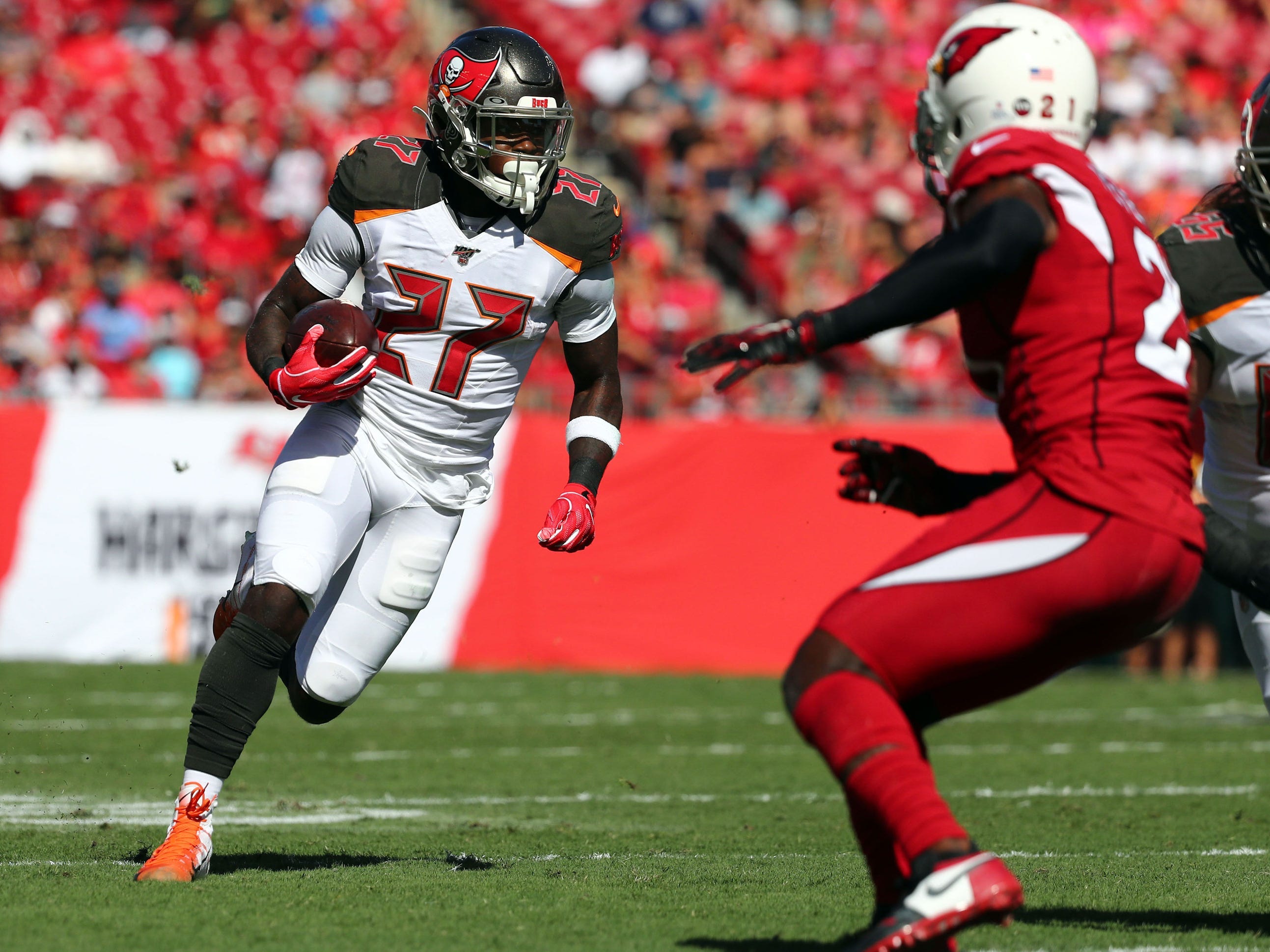 Why you should sit him: There are simply too many weapons in Tampa Bay to assume Jones will be a centrepiece of the offence. He was already the fifth- or sixth-billed member of the Buccaneers offensive attack heading into the season, and that was before Tampa brought in running back Leonard Fournette. So now even more questions swirl about Jones’ viability in fantasy.

Tampa should score a lot of points this season, so there will probably be enough action for Jones to be good in your lineup, but Week 1 in Tampa will be the Tom Brady show. 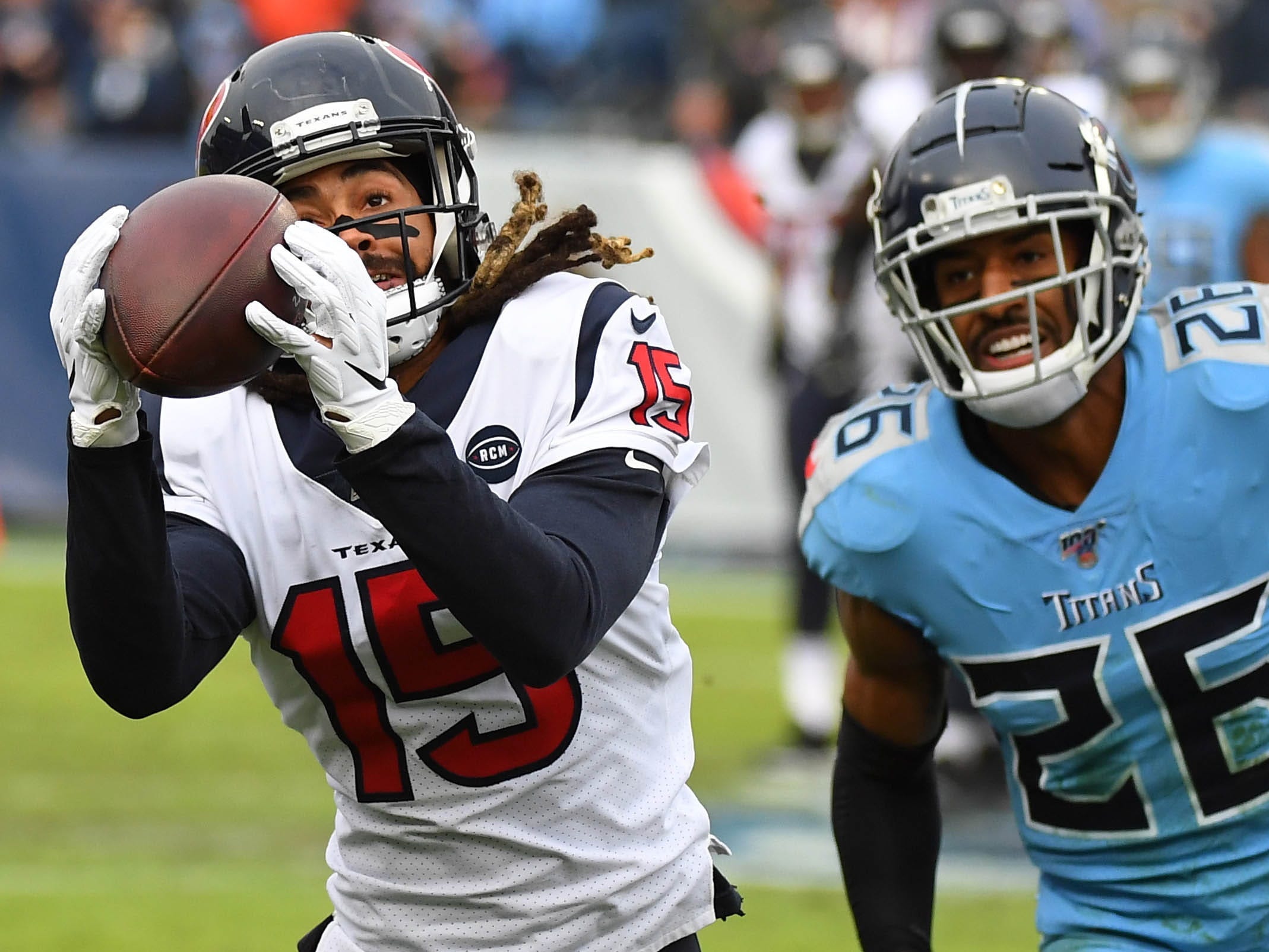 Why you should start him: When he’s been able to stay on the field in the past, Fuller has been a fantasy stud. He’ll be there Thursday night, and with DeAndre Hopkins no longer in Houston, Fuller should be the Texans’ top target in a shootout with Kansas City. 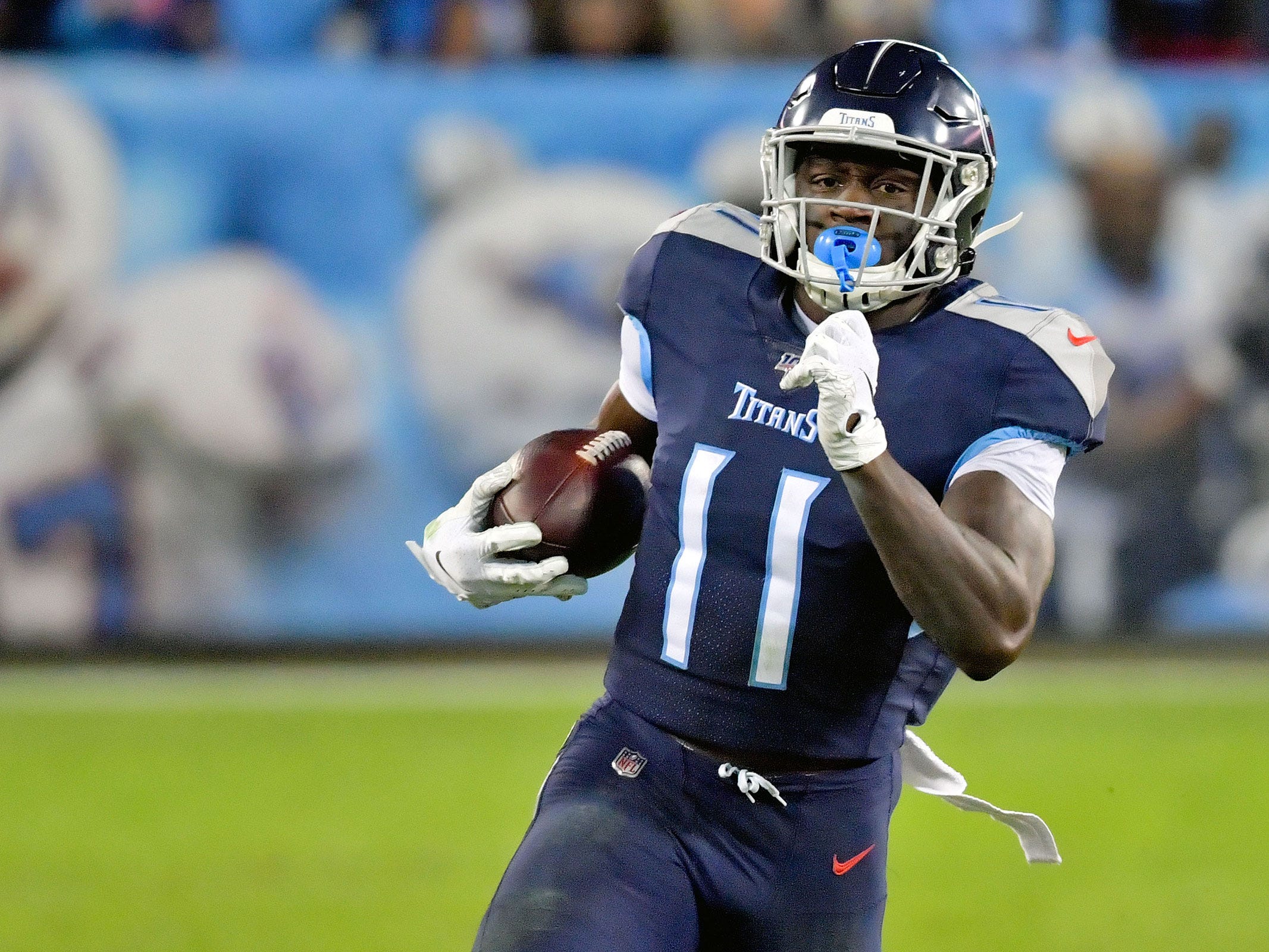 Why you should sit him: This game may be a low-scoring slugfest. High altitude early in the season should have guys on both sidelines sucking air before halftime. If Brown can keep his legs under him, he could break out, but it seems more likely that his better games will come down the road. 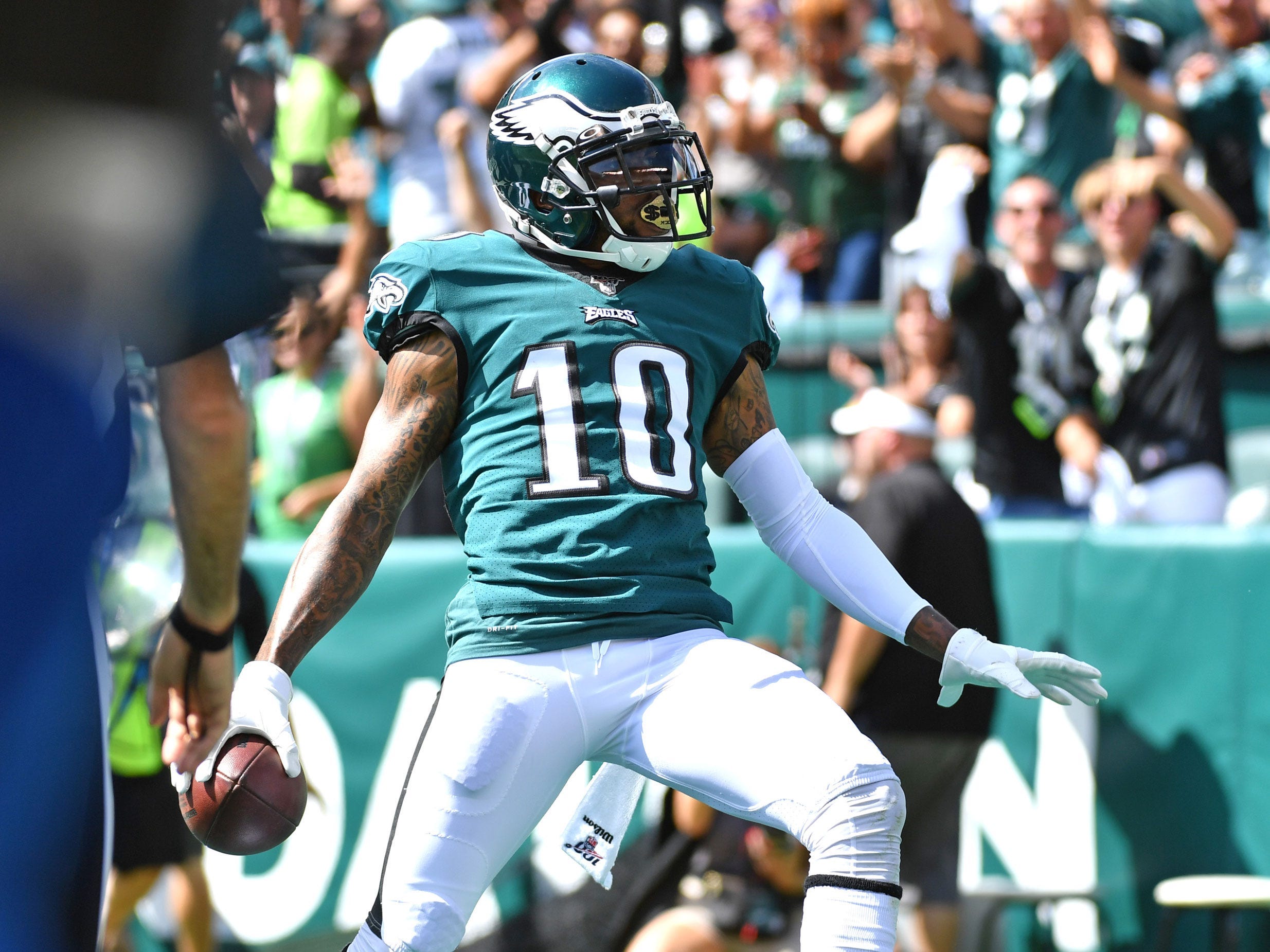 Why you should start him: Jackson only played in one full game last season: Week 1 against Washington. He finished with eight receptions for 154 yards and two touchdowns.

The Eagles are still dealing with some injuries at receiver, so Jackson should be a big part of the game plan once again this year. Why you should sit him: The Jets offence just doesn’t seem likely to find much success this weekend. In two games against the Bills last year, Sam Darnold threw for 175 yards and 199 yards with just two touchdowns to show for his effort.

Jamison Crowder’s fantasy fate is tied to Darnold’s, and Sunday’s game looks like it will be a rough one.

Why you should start him: If Roethlisberger is going to have a big day, he’s going to need someone to throw to. JuJu Smith-Schuster is now the team’s top target; he first emerged as a second option behind Antonio Brown in his rookie season.

That leaves Johnson primed to step into the role that Smith-Schuster used to fill. 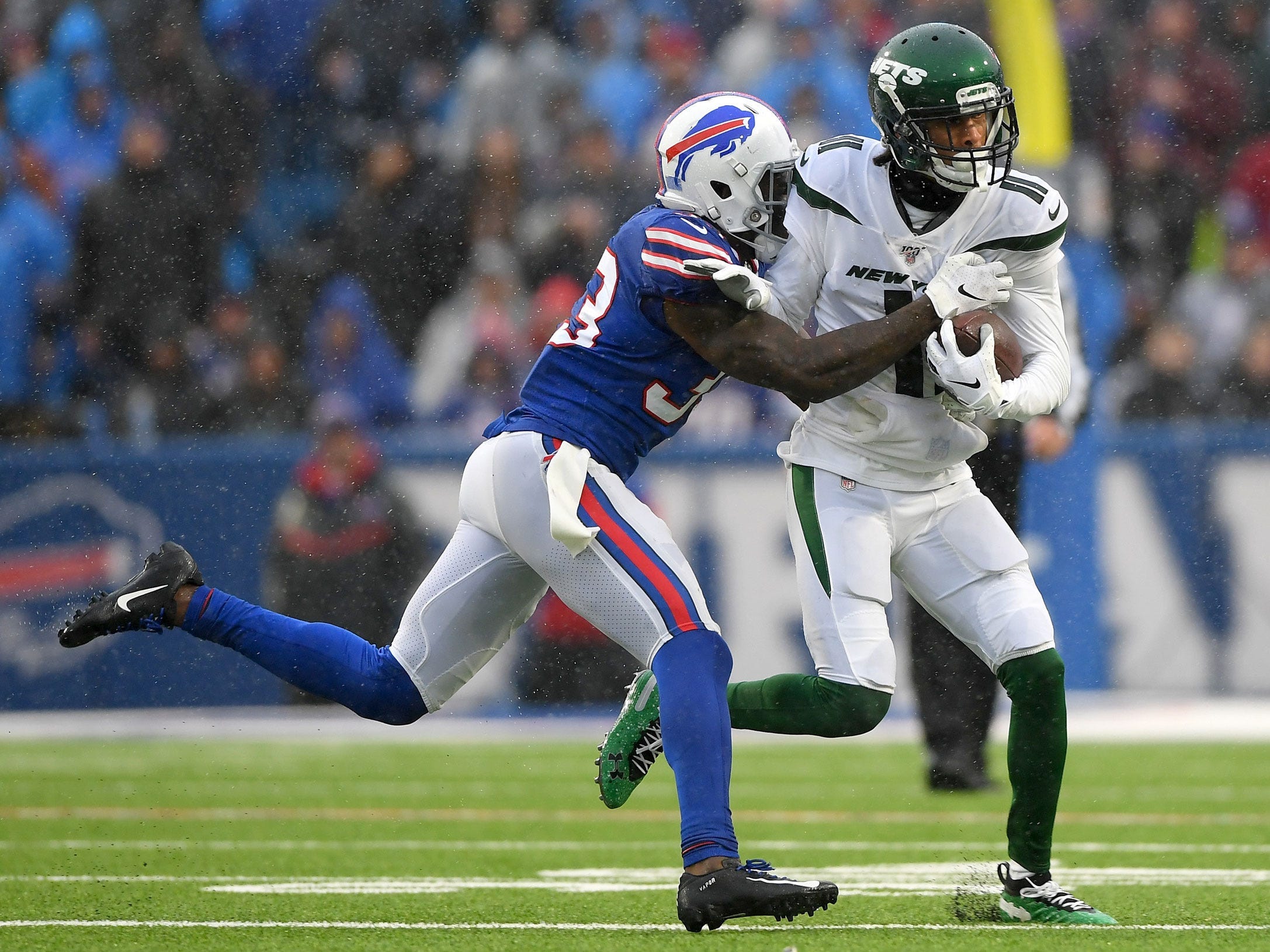 Why you should sit him: Anderson is a solid player, but he’s also playing his first game with a new team. And that team is playing its first game under a new head coach and with an offence led by a new quarterback.

That’s too much to figure out to expect a huge day for Anderson. Why you should start him: The Raiders made a splash at the NFL Draft this year by taking Henry Ruggs III as the first wide receiver off the board, ahead of prospects CeeDee Lamb and Jerry Jeudy, who many analysts ranked higher.

Head coach Jon Gruden likes nothing more than proving himself right, so one would imagine the Raiders have a few special plays in their back pocket to put Ruggs and his lightning speed in a position to succeed. 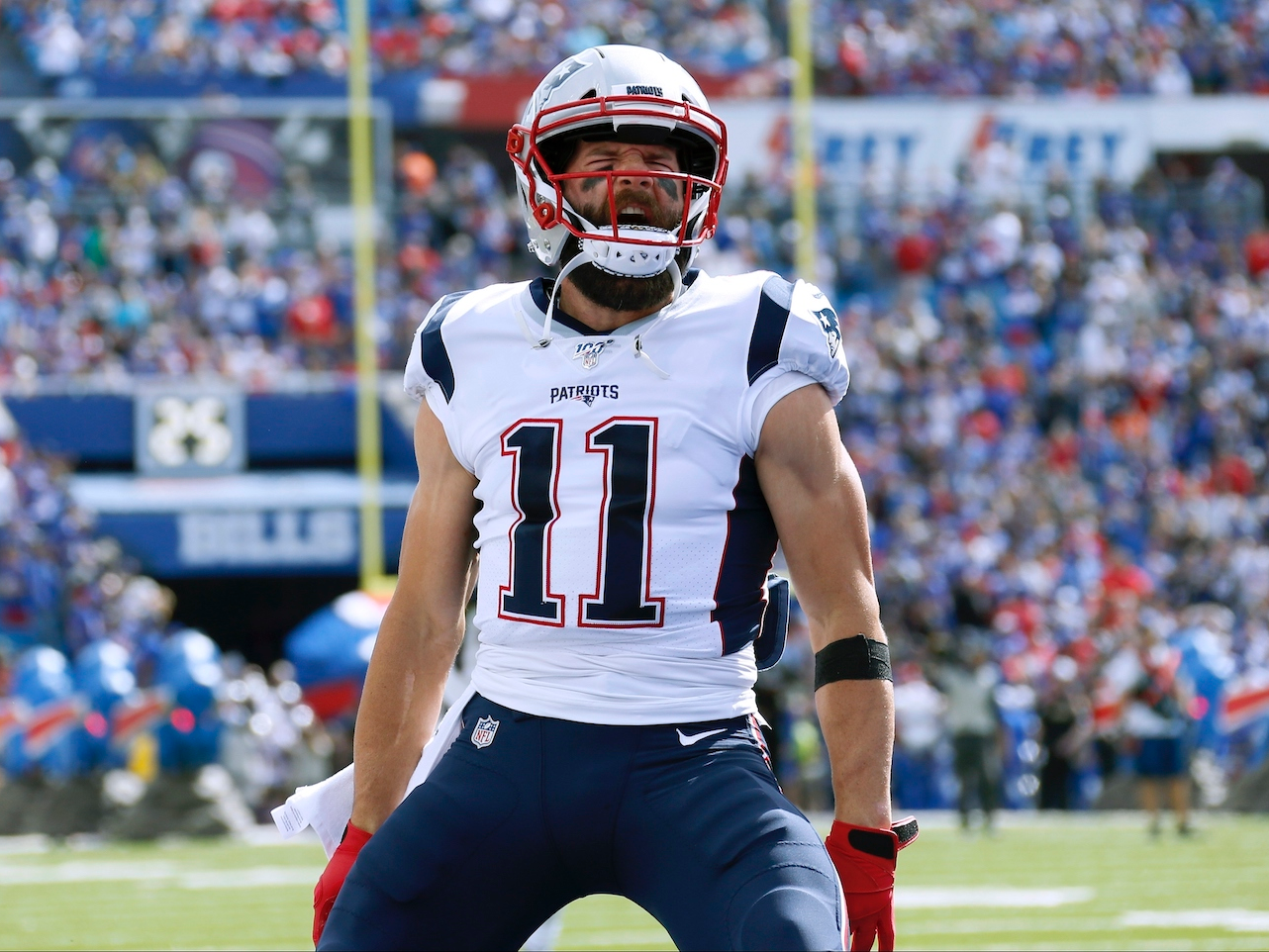 Why you should sit him: Over the last few years, much of Edelman’s fantasy value has stemmed from his usage, and much of that usage came thanks to Tom Brady’s total trust in his favourite target.

Edelman is still the most talented offensive threat the Patriots have, but we won’t know how much Cam Newton likes to find him until the two take the field together. 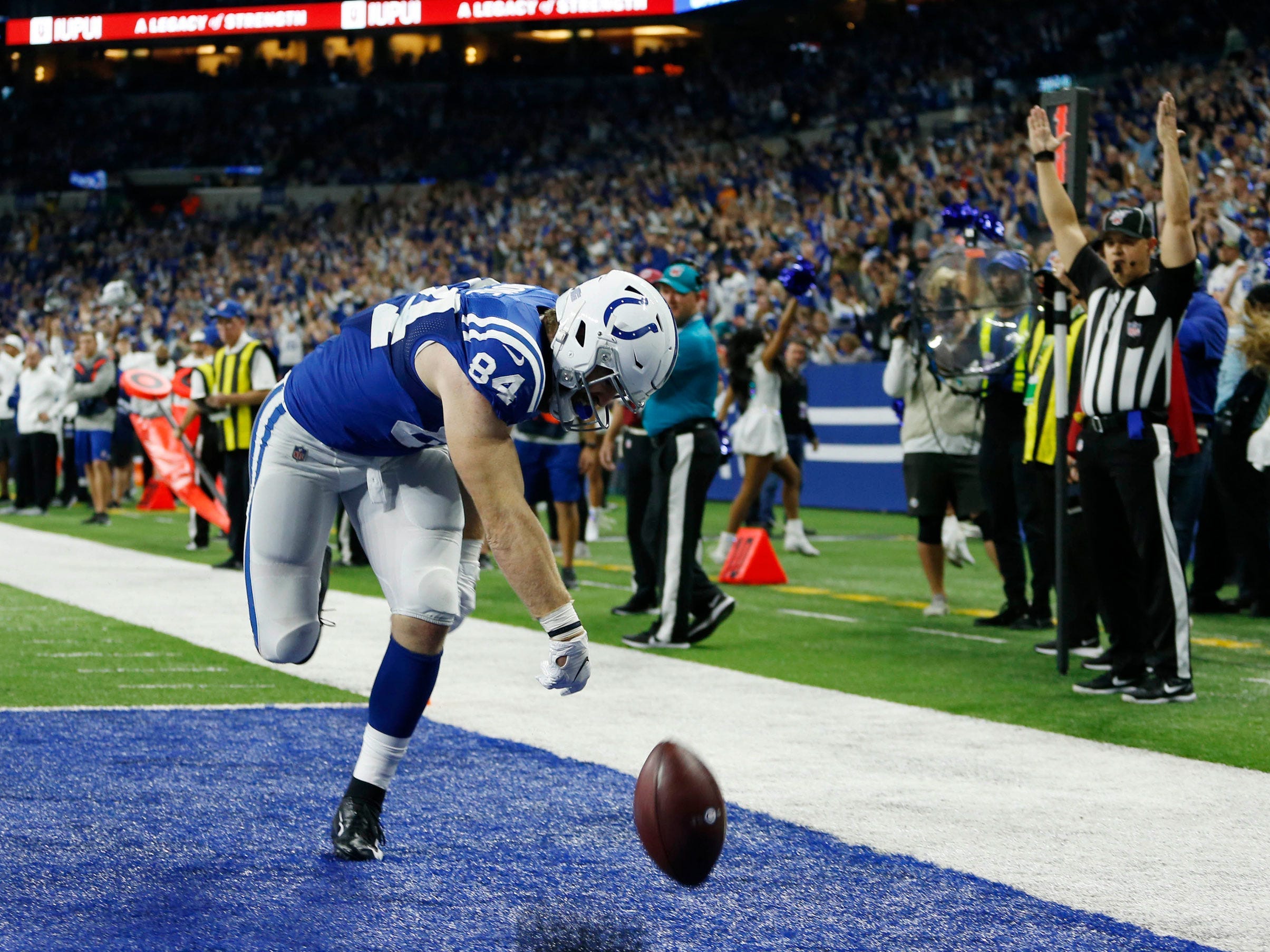 Why you should start him: The Colts seem positioned to score a lot of points against the Jaguars on Sunday, and new quarterback Phillip Rivers has a pretty good history of finding tight ends in the red zone. Doyle hasn’t lit up the scoreboard like others at his position have in recent years, but he has a good chance of getting a touchdown or two. 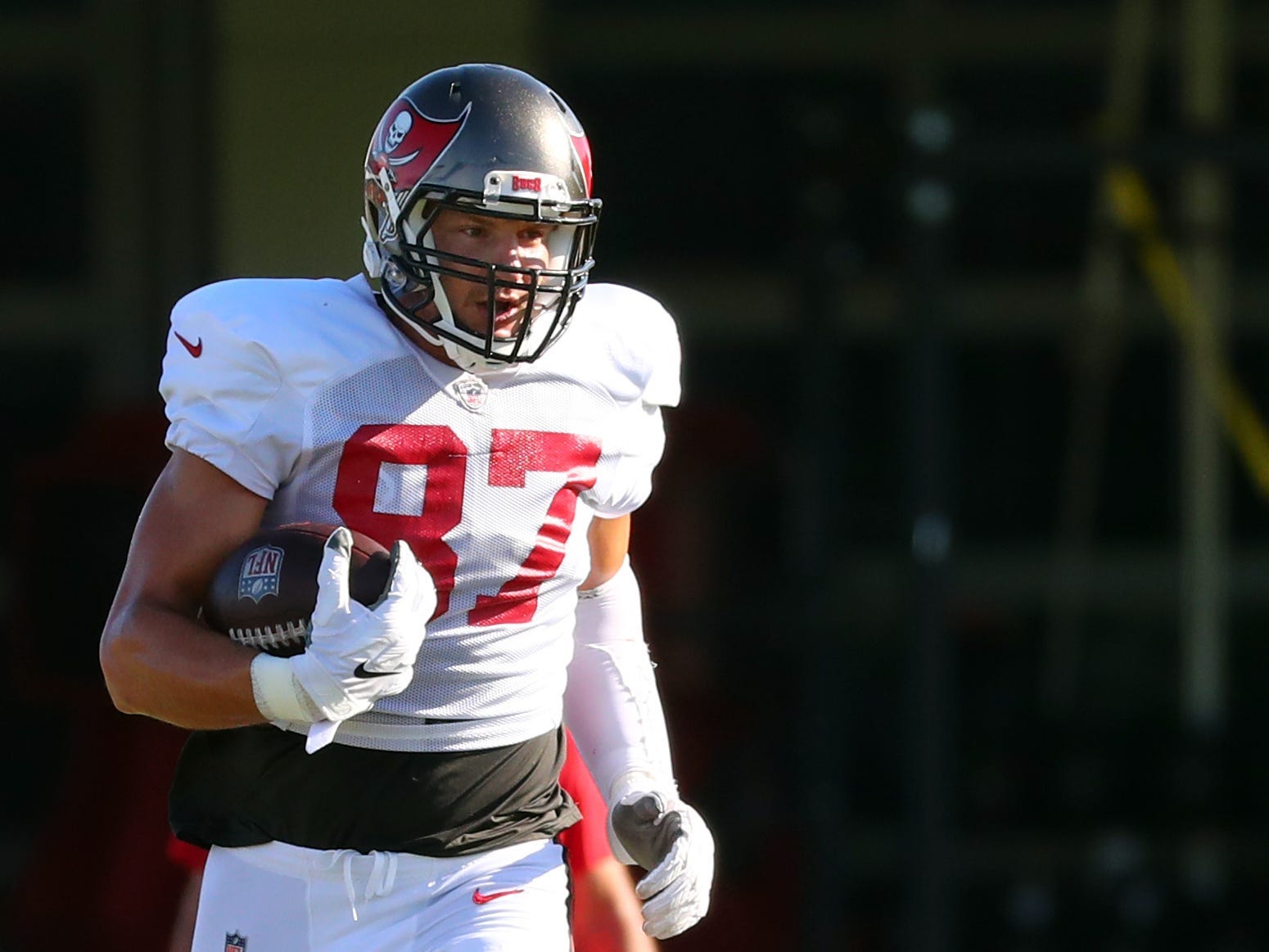 Why you should sit him: If Gronkowski can play like he has through the first nine years of his career, he’ll likely be one of the top-scoring tight ends this season. The problem is, we have no idea what his usage will look like in the Tampa Bay offence.

The Buccaneers already have two talented tight ends in O.J. Howard and Cameron Brate. Adding Gronk gives an embarrassment of riches at the position, but it’s also a lot of mouths to feed.

To be clear, Tampa Bay didn’t coax Gronk out of retirement without intending to use him, but let’s watch his snap count in week 1 to see how prominent a role he winds up playing in the Buccaneers offence. If he’s on your roster, you’re probably playing him, but don’t be shocked if week 1 is something of a dud. 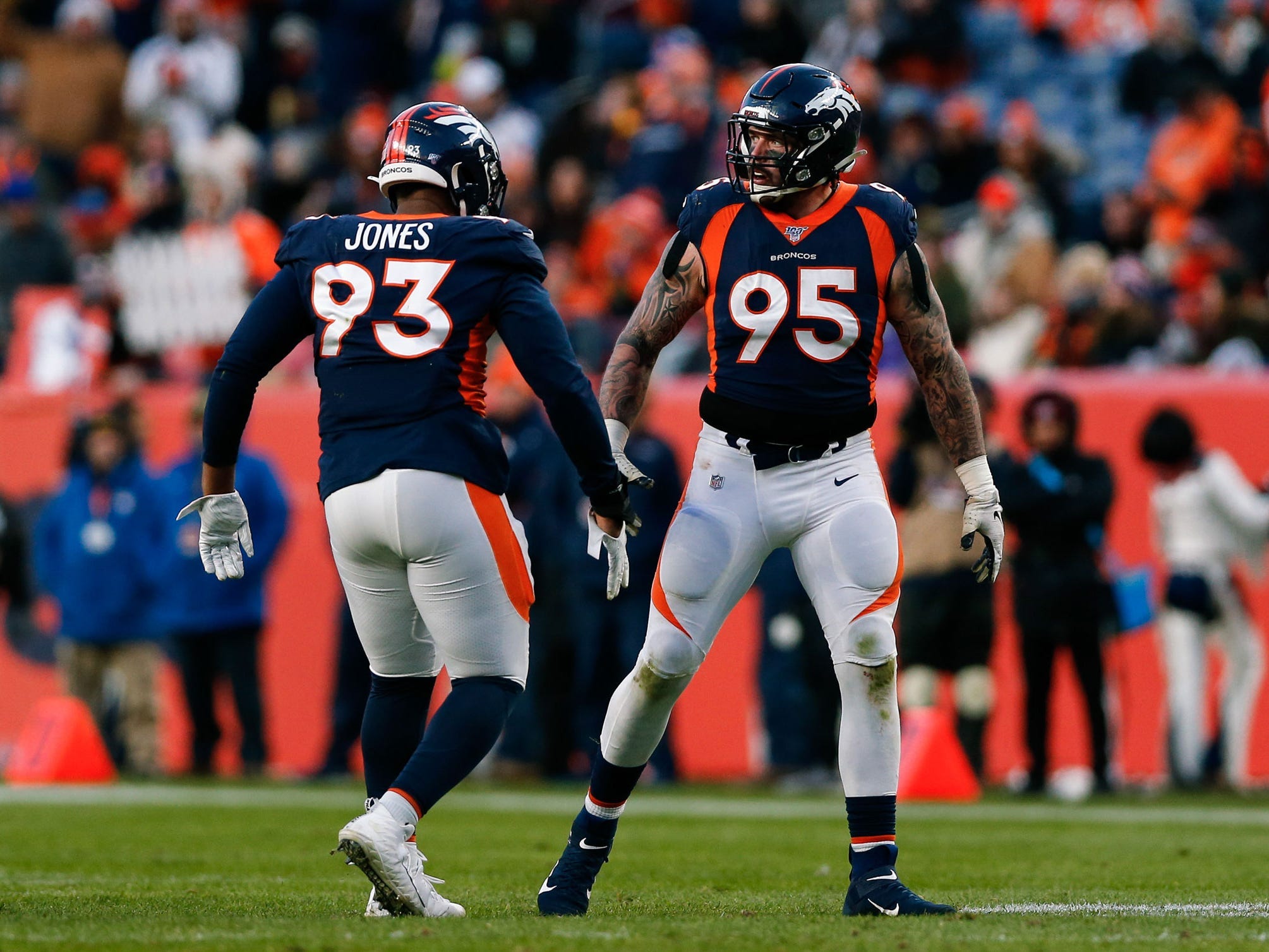 Why you should start them: The altitude at Mile High Stadium has been an advantage for Denver early in the season for years. If the Broncos can keep their lungs a bit longer than the Titans can, they should have the advantage on every side of the ball. 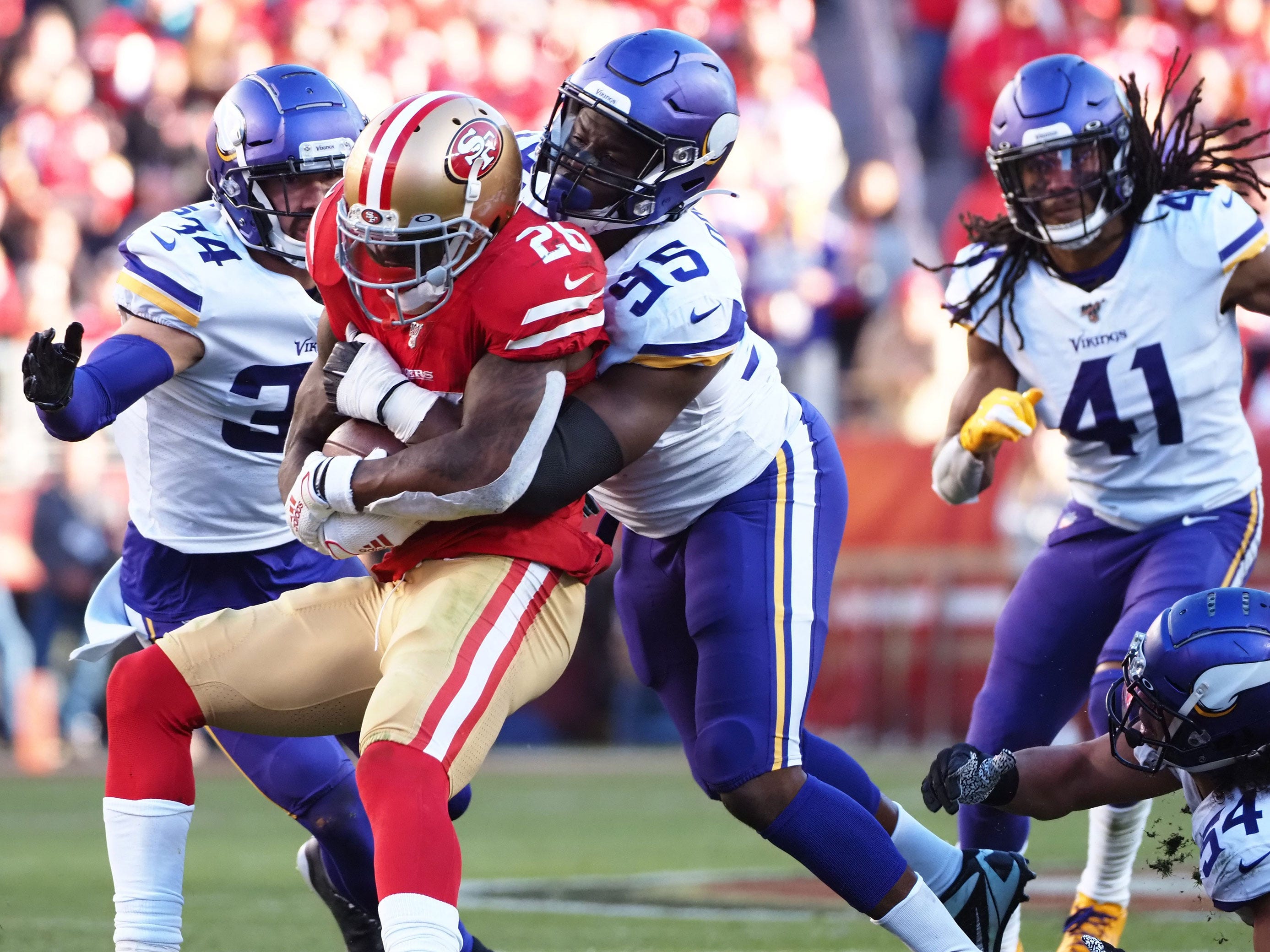 Why you should sit them: Aaron Rodgers is another year older and still doesn’t have a ton of great talent around him, aside from Davante Adams. Rodgers is also pretty open about his frustrations with the Packers front office and the decision to draft his potential successor – Jordan Love – in the first round of the draft.

So you may not want to start the Minnesota defence against a ticked off Aaron Rodgers with something to prove. 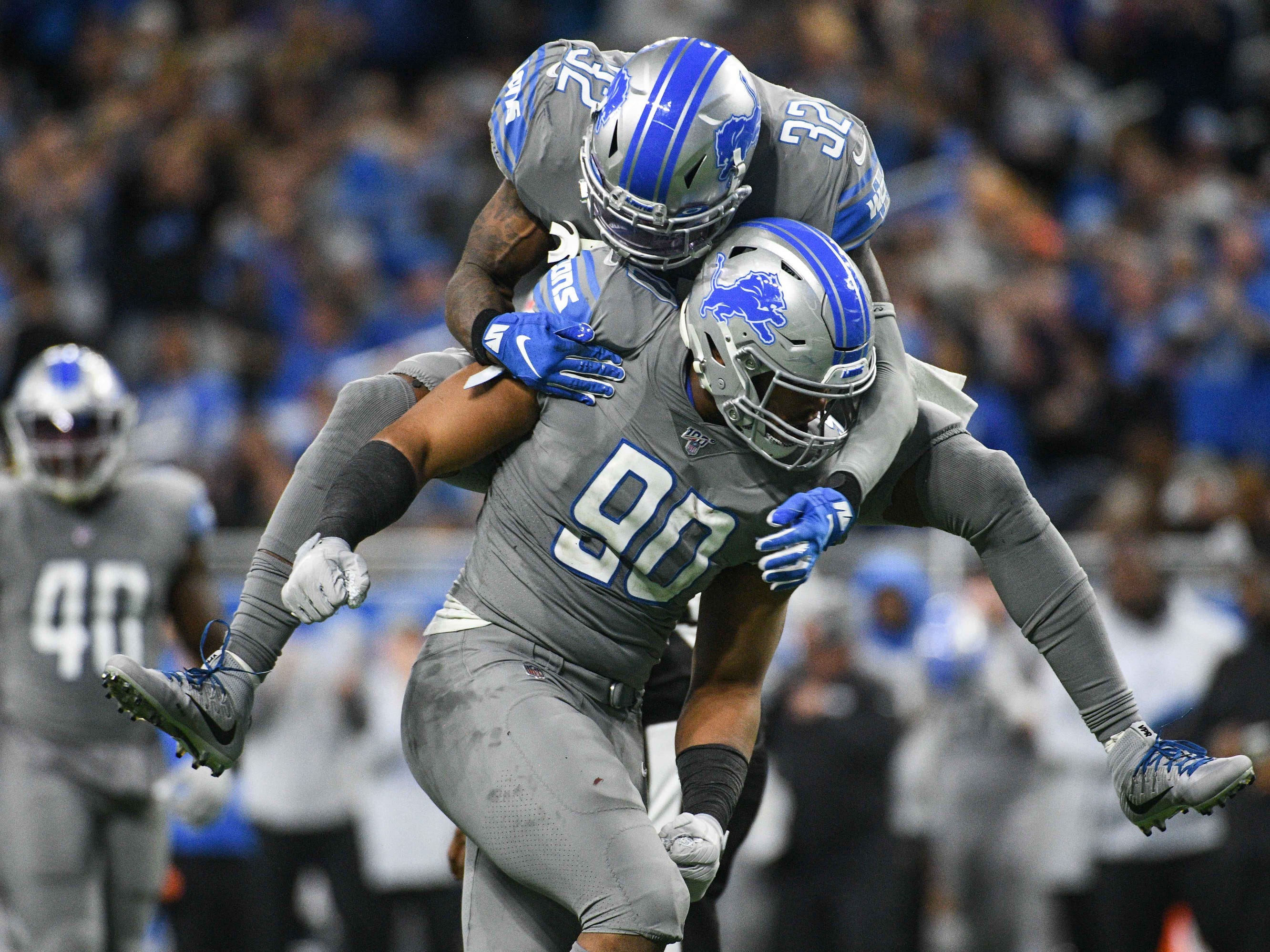 Why you should start them: The Bears are once again riding with Mitchell Trubisky at quarterback. The Lions defence hasn’t been as good as the franchise hoped since hiring former Patriots defensive coordinator Matt Patricia as head coach. But if there were ever a chance for a big performance, a matchup with Trubisky is a good time.