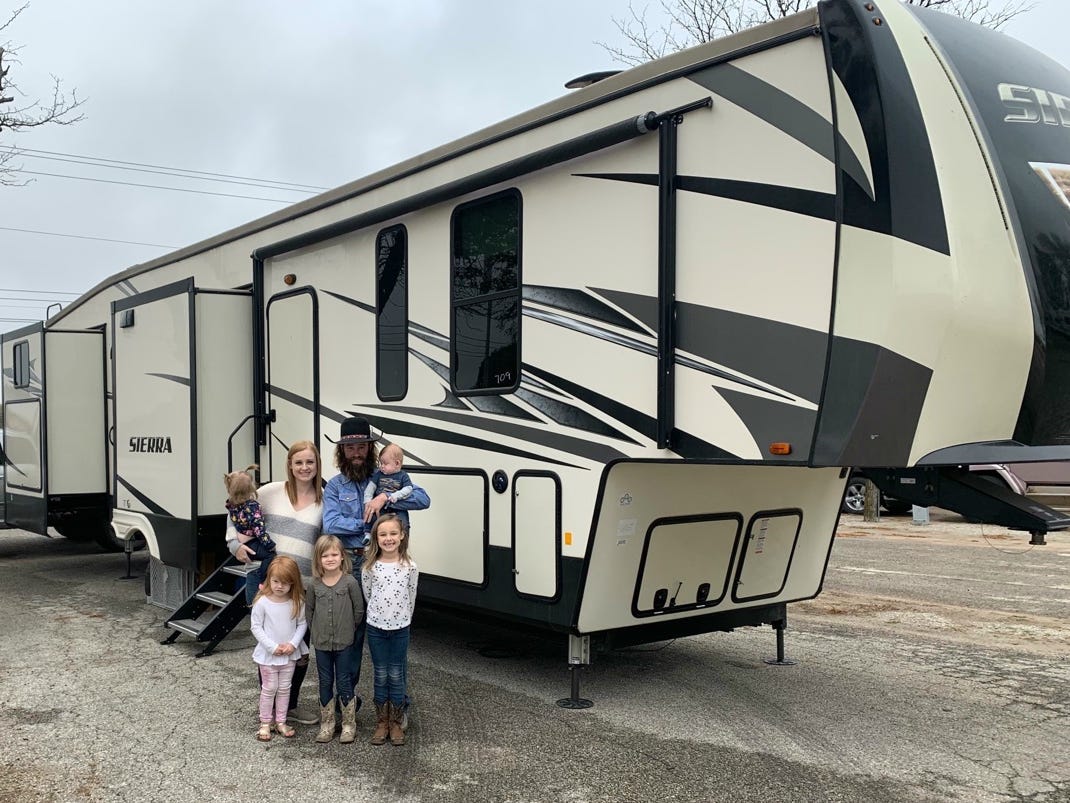 Courtesy of Katherine UmbargerKatherine and Kyler with their five kids in front of the RV.

Katherine and Kyler, both 27, have been on the road with their five kids for over a year now. They live full-time in a nearly 42-foot-long RV as they travel around the country.

Their 429-square-foot RV has two bathrooms, a full-sized kitchen, a fireplace, a grill, a master bedroom, and a room shared by the four young girls.

While families choose full-time RV living for all kinds of reasons, Katherine told Insider that their primary reason for downsizing was so that the family could spend more time together. Kyler travels for work, fixing old pipelines, while Katherine is an online marketing executive.

“We did this so the kids could see their dad every night,” Katherine told Insider.

Here’s what their lives on the road are like.

Katherine told Insider that the main reason her family decided to move into an RV was so they could all travel with her husband for work.

Courtesy of Katherine UmbargerKyler’s work fixing pipelines takes him all over the country. RV living allows the family to go with him.

Her husband, Kyler, works to fix pipelines. When Insider spoke to Katherine in October, the family was based out of Kansas, but they have since made their way to Oklahoma.

“Them getting to see their dad every night, that means the most to me,” Katherine told Insider. “But I know that they really enjoy going out and seeing new things.” 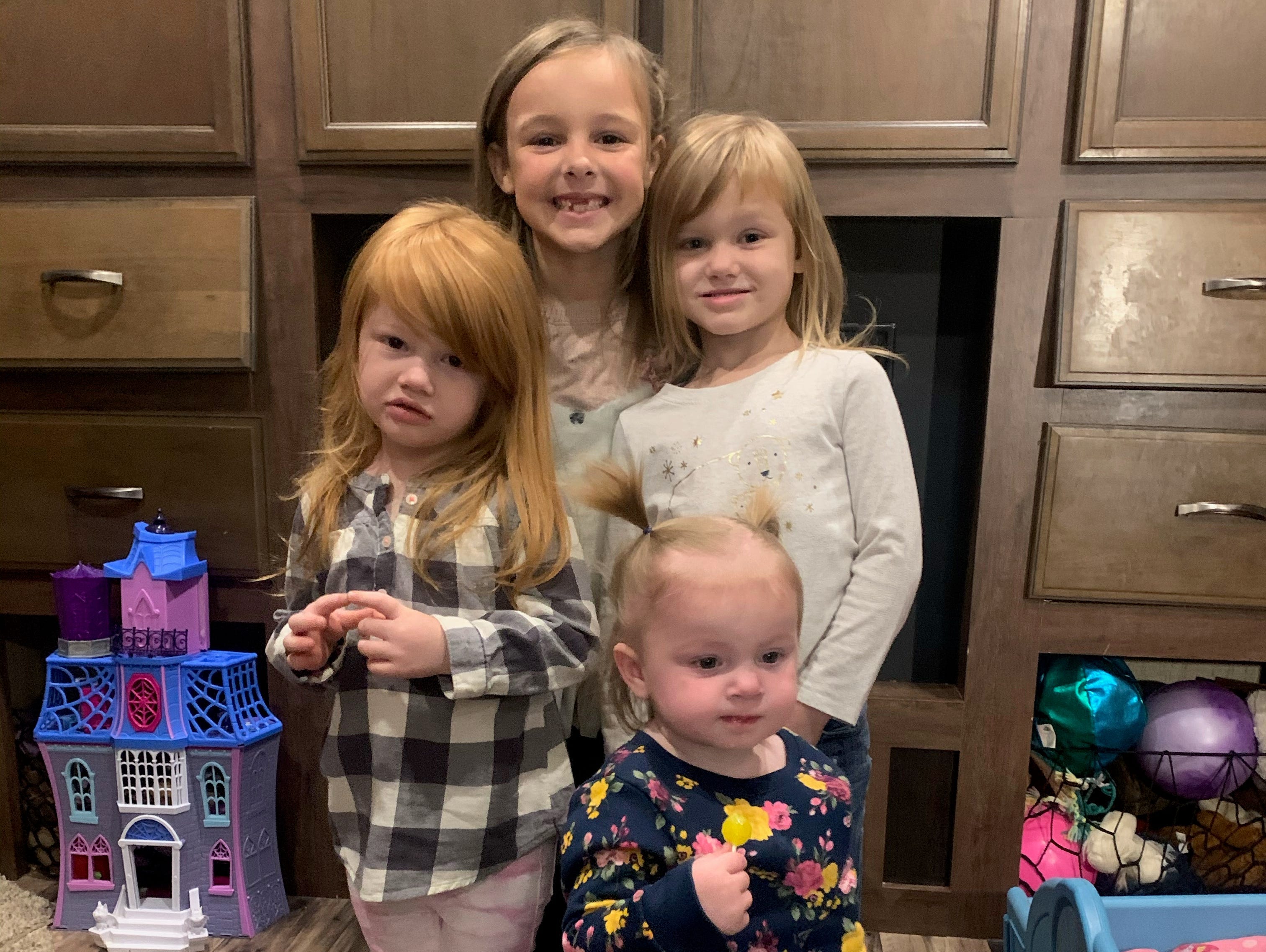 Courtesy of Katherine UmbargerKatherine and Kyler’s four daughters all share one room.

So far, the family has travelled across several states in the Midwest like Illinois, Iowa, Nebraska, and Minnesota. Katherine told Insider that she’d love to eventually make her way to Utah and to the national parks in Colorado.

The couple bought their Sierra RV in spring 2019 for $US53,000 and started travelling in May of the same year. But the two weren’t new to living on the road. 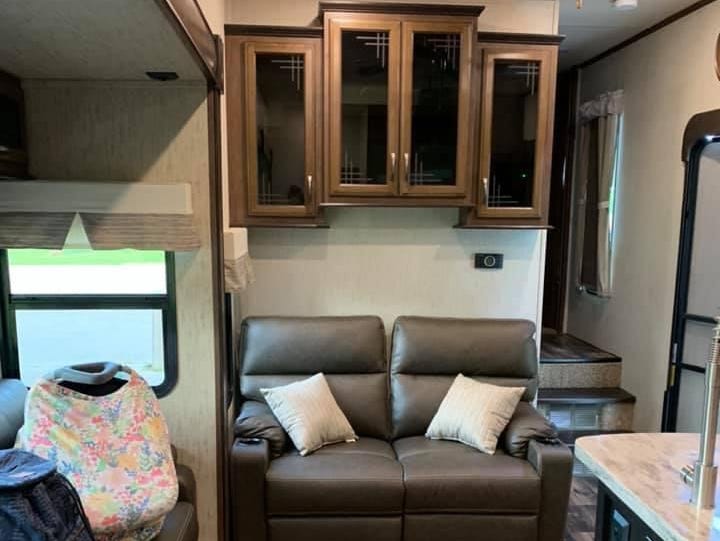 Courtesy of Katherine UmbargerThe living room in the RV has a two-seater small couch.

Katherine said she and Kyler lived on the road and travelled earlier in their relationship. Initially, Katherine told Insider, they would hotel-hop, but that started to get expensive. They decided to forgo the hotels and buy a small camper instead.

“In the long run, it was cheaper to have a camper payment than it was to pay for hotels every week,” she said.

Of course, once they had kids, the small camper was no longer going to cut it. Their current RV is much larger than the original camper.

Before moving into the RV, the family lived in a two-story home. Katherine says downsizing from all that space was the hardest part. 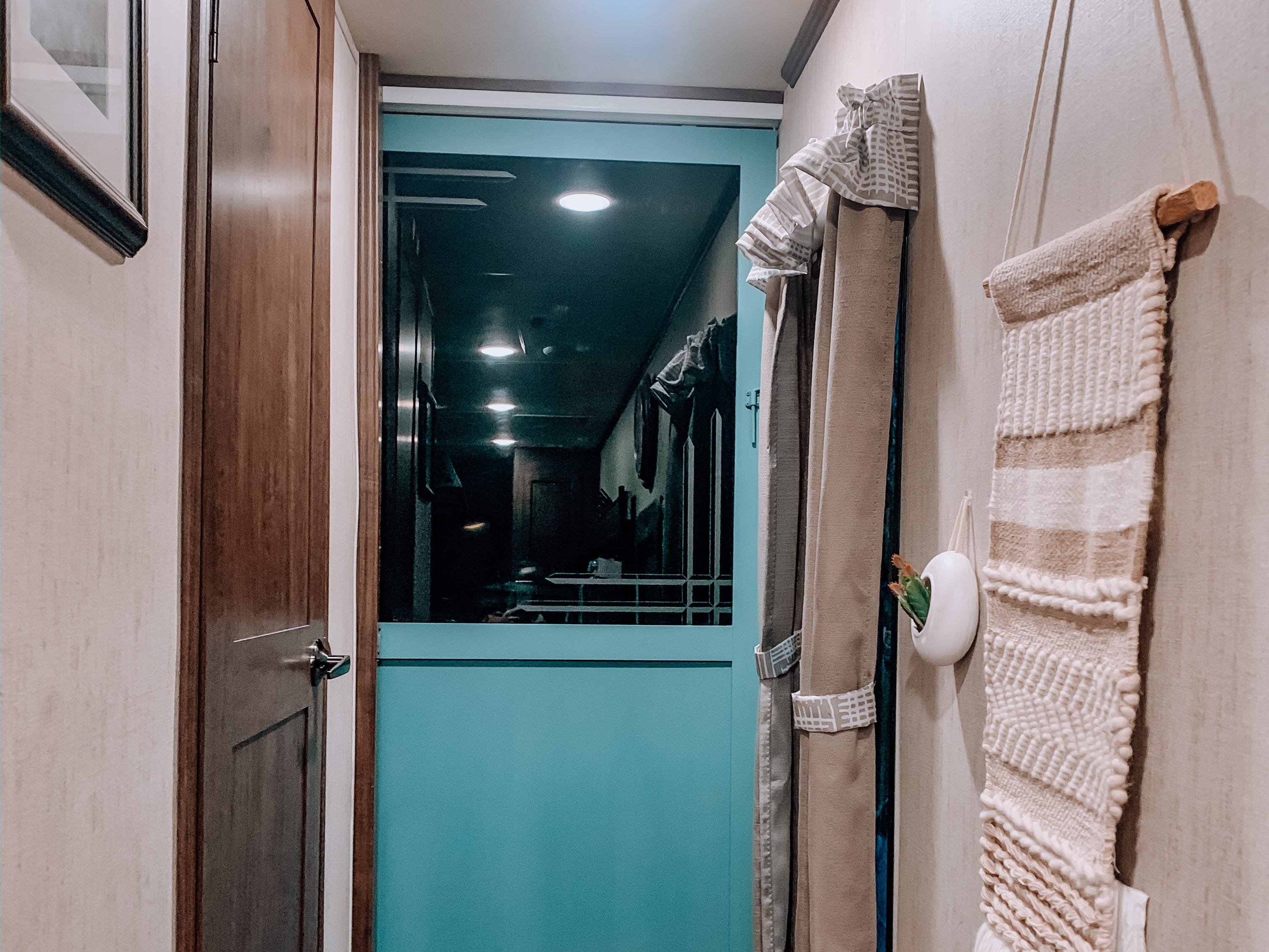 Courtesy of Katherine UmbargerThe family had to get rid of a lot of their things in order to live comfortably in the 43-foot-long camper.

Obviously, not everything in their house fit into the RV. Katherine told Insider that they ended up selling some of their stuff and putting the rest in storage.

The RV itself has a lot of storage space too, she added, and the cabinets hold a lot of their day-to-day items like the children’s clothes.

But despite the relatively large size of the RV and the ease with which it accommodates the family, Katherine says they do have to make some trade-offs for their life on the road – like keeping only one set of kitchen utensils per family member.

“We have, like, the bare minimum of everything,” Katherine said.

Katherine gave Insider a walkthrough of the family’s living arrangements. Even though the a big family shares the RV, it doesn’t feel cramped.

Courtesy of Katherine UmbargerThe RV has a full-sized kitchen, including a full refrigerator.

As Dillon Thompson previously reported for Yahoo News, one of Katherine’s TikTok videos received mixed reactions, with some commenters criticising the way the family was living.

While one person said the RV “is too small for them,” another wrote that the RV is “gorgeous.”

The RV has two bedrooms. 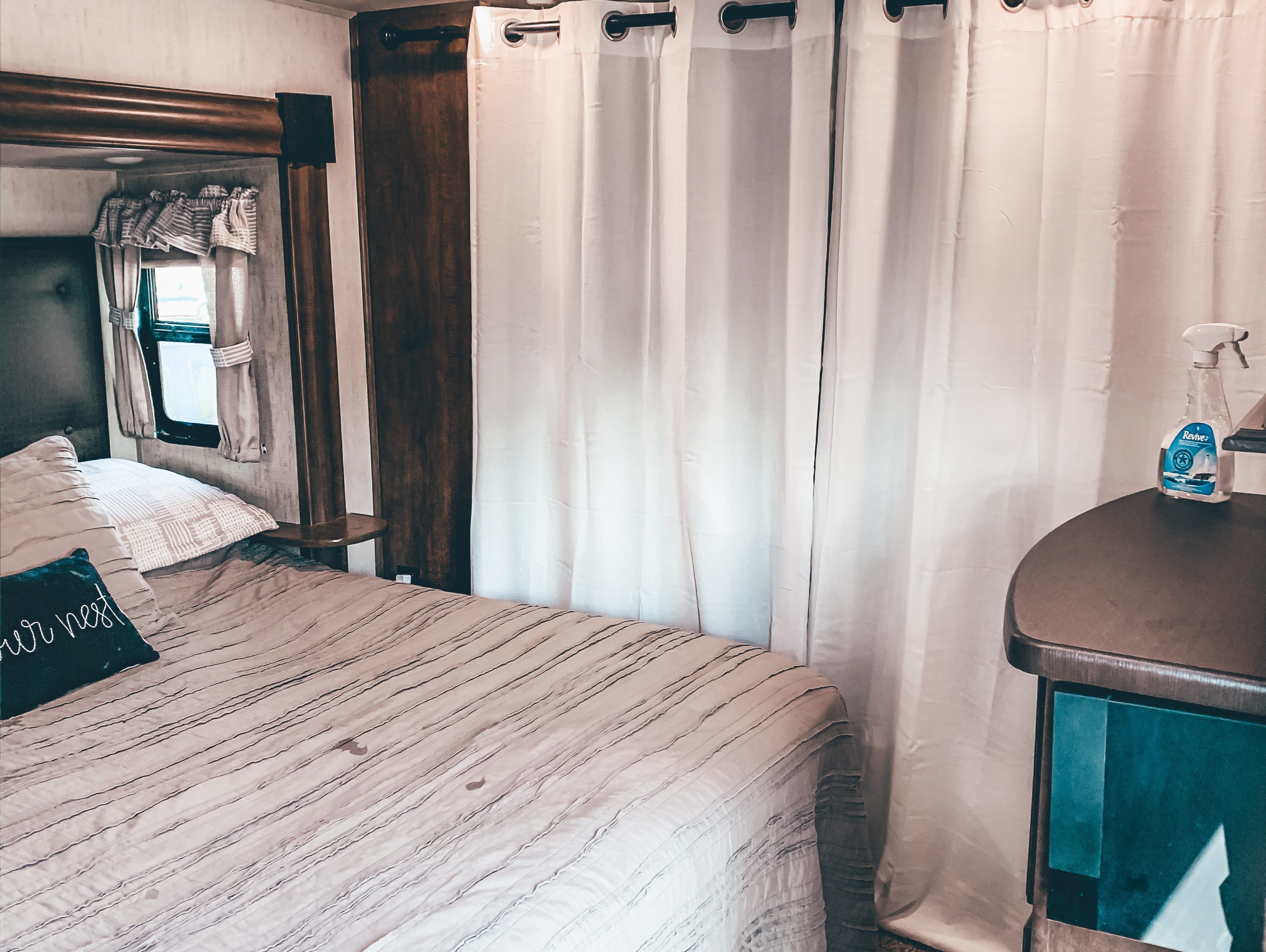 Courtesy of Katherine UmbargerKatherine and Kyler share the master bedroom with their youngest child.

Katherine and Kyler sleep in the master bedroom with their infant son.

Though the four young girls share a room, Katherine adds that there’s not much conflict and they usually get along well.

Courtesy of Katherine UmbargerThe four girls sleep in a room with bunk beds and a television.

The girls’ room used to have a full couch that the family got rid of to make space for a playpen and toddler beds.

During bedtime, Katherine will usually put the youngest to bed first. The older girls come in an hour or so later and watch TV for a bit before going to bed.

Since they have been on the road and downsized their belongings, the girls share more things, including clothes.

“They have their moments where they fight like cats and dogs, but they share everything,” Katherine added.

She homeschools them between three and four days a week.

The RV also comes with a full kitchen, a dining area, and a fireplace that doubles as a heater.

Courtesy of Katherine UmbargerThe sink is on an island in the middle of the kitchen area and converts into more counter space.

The kitchen has an island and a full-sized sink. The sink has covers that blend in with the countertop so when they’re not using it, it’s more counter space for the family.

While the family uses the fireplace as a heater, the RV also has central heating and cooling.

There’s no shortage of appliances in the RV. They have a regular-sized refrigerator, a smaller refrigerator, two microwaves, and a grill. 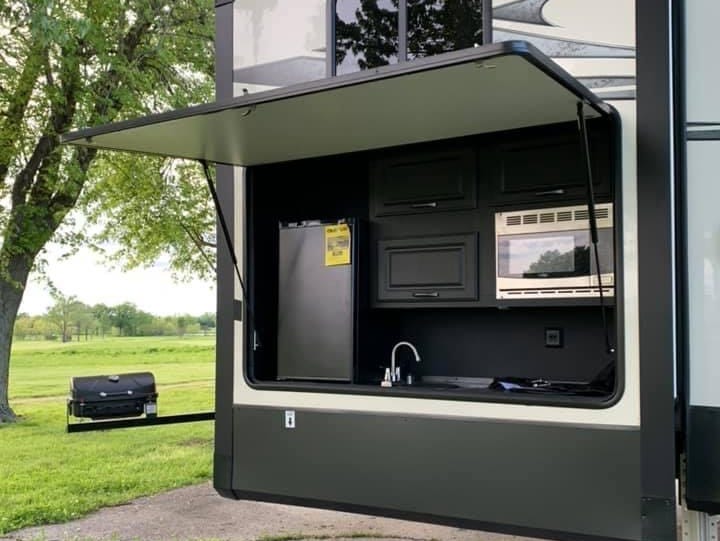 Courtesy of Katherine UmbargerThe second smaller kitchen on the outside of the RV has a mini-fridge and another microwave.

“We have a grill. We actually carry it into the camper and we fasten it down,” Katherine told Insider.

The living space also has one full bathroom and an additional half-bathroom. 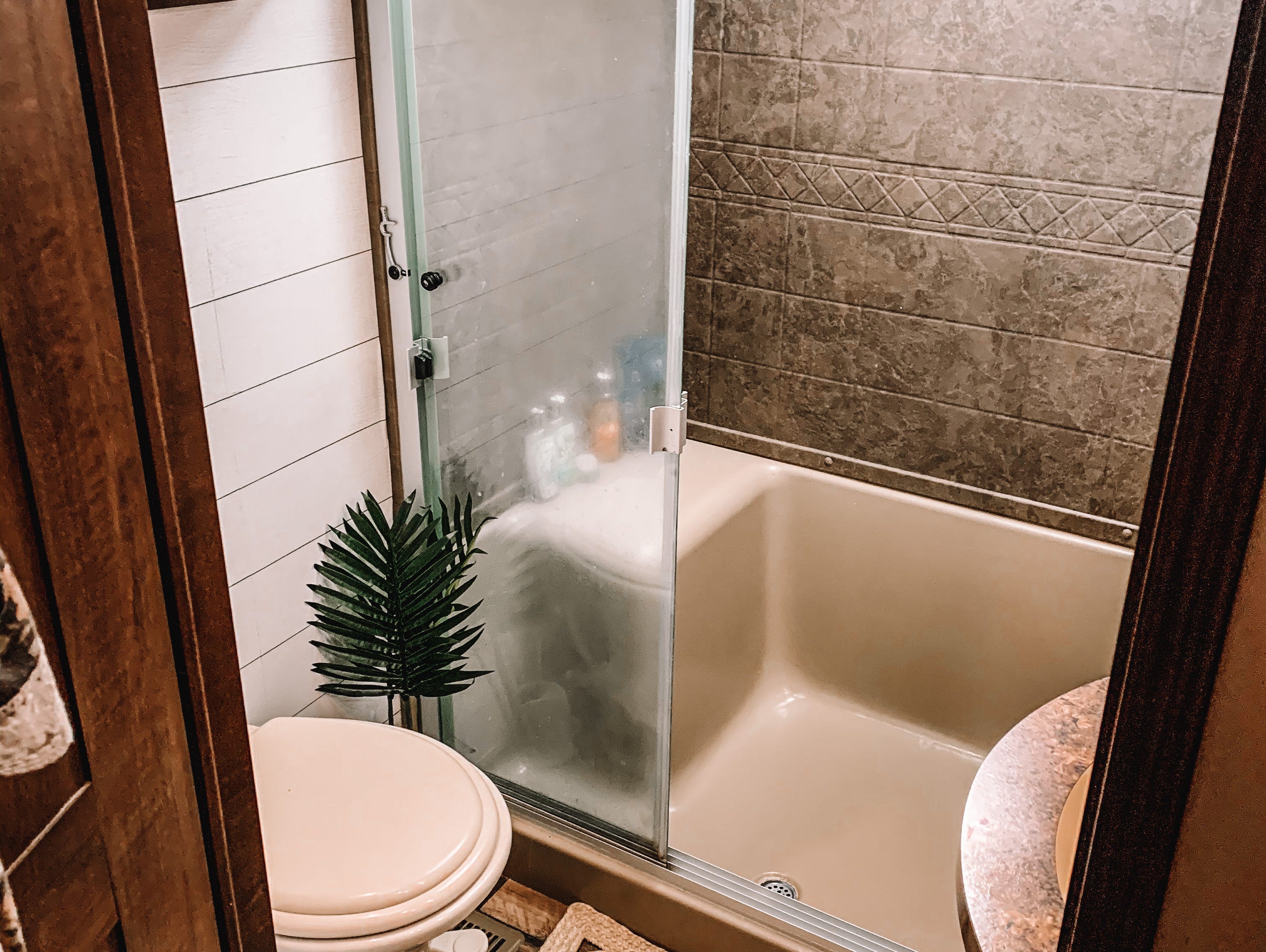 Courtesy of Katherine UmbargerThe full bathroom has a partitioned shower and a separate toilet.

The four girls have their own half-bathroom, while the full bathroom is for Mum and Dad.

And like any family with five young kids, there’s always plenty of laundry to do. While the RV didn’t come with a washer/dryer unit, the couple installed one.

Aside from installing a washer/dryer, Katherine says they didn’t make a lot of modifications to the RV.

Courtesy of Katherine UmbargerThe washer/dryer unit sits inside a closet.

One of the most challenging things while travelling in the camper, Katherine says, has been finding a proper campground for it when they’re ready to settle in at a spot.

“We have one of the biggest [RVs] you can buy,” she told Insider. “I think that’s probably been the most challenging thing, just trying to find campgrounds that aren’t ridiculously expensive or far away that can accommodate us.”

Katherine told Insider that despite some challenges, like finding adequate parking, living full-time in an RV for the last year has been a positive change for their family and finances. 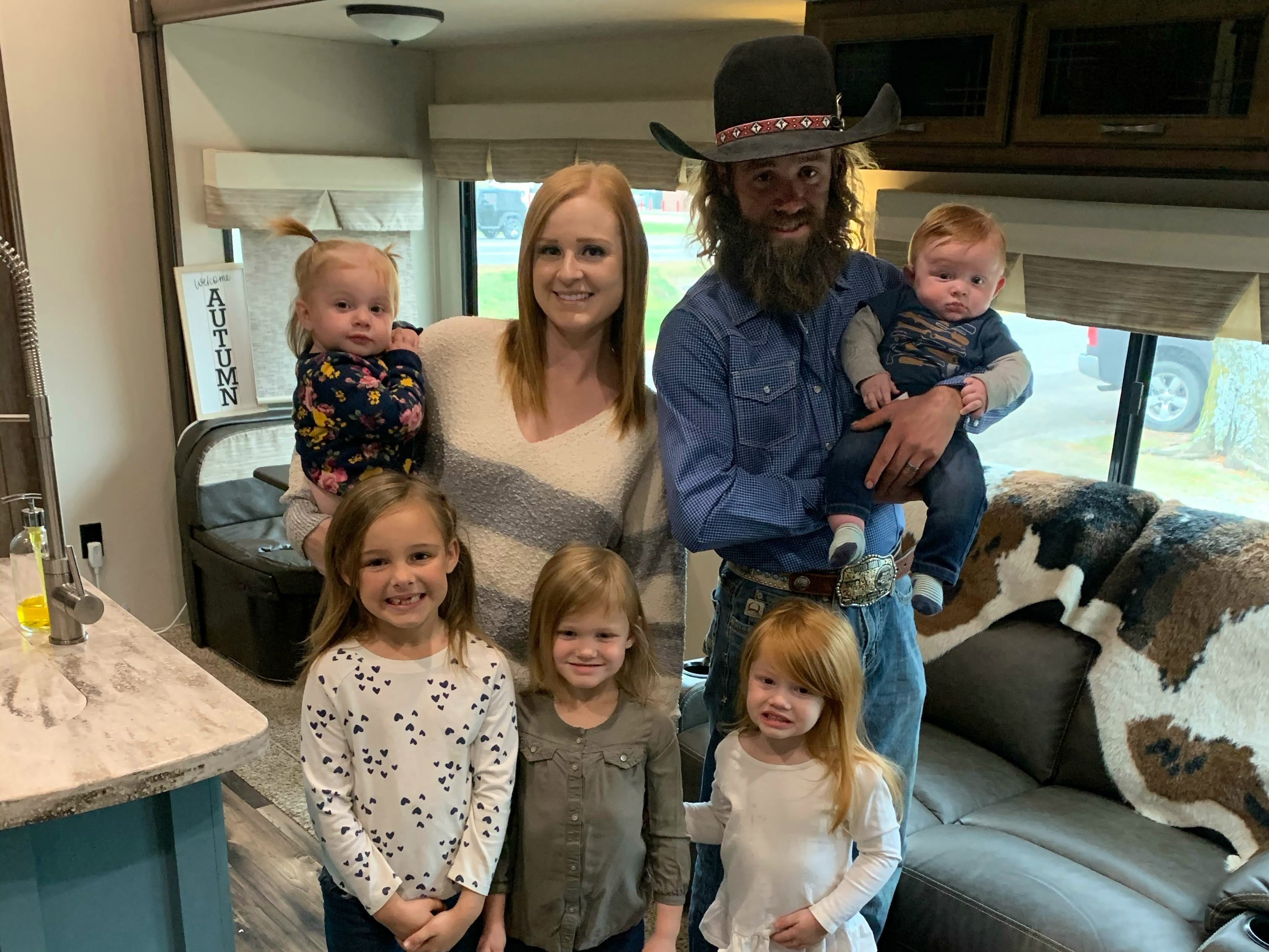 Courtesy of Katherine UmbargerKatherine and Kyler have five kids: Kinley, who is seven; Kinsey, who is five; Kylie, who is three; Kelby, who is 18 months; and Kyler, the youngest, who is only a few months old.

“A lot of people were like, ‘You really need to stop having kids since you’re so poor you have to live in a camper.’ But it was actually the other way around. We actually moved into the camper to get rid of a lot of our debt. It’s worked out. It’s worked out pretty good,” Katherine told Insider.