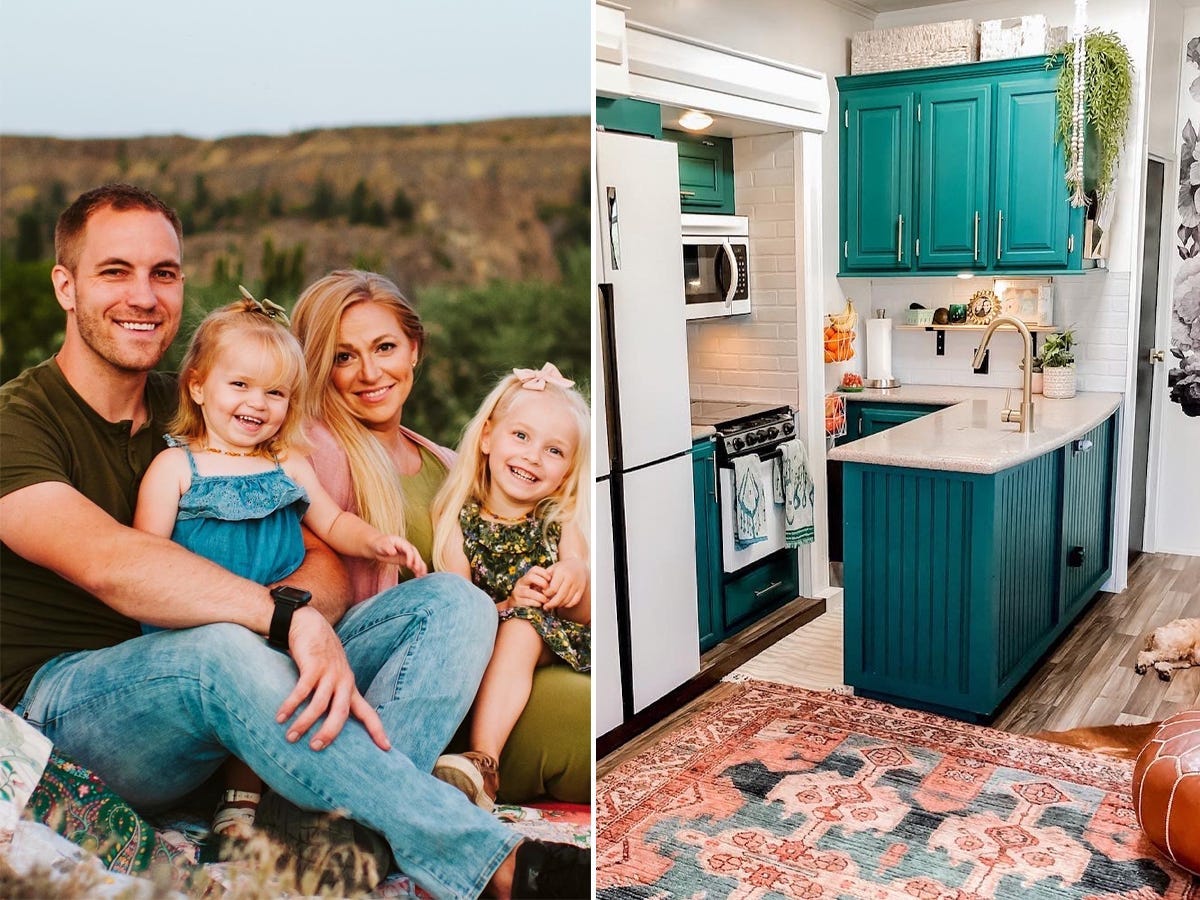 Emily and Charlie Feely knew they couldn’t afford to buy a home in Seattle that would suit their family of four. 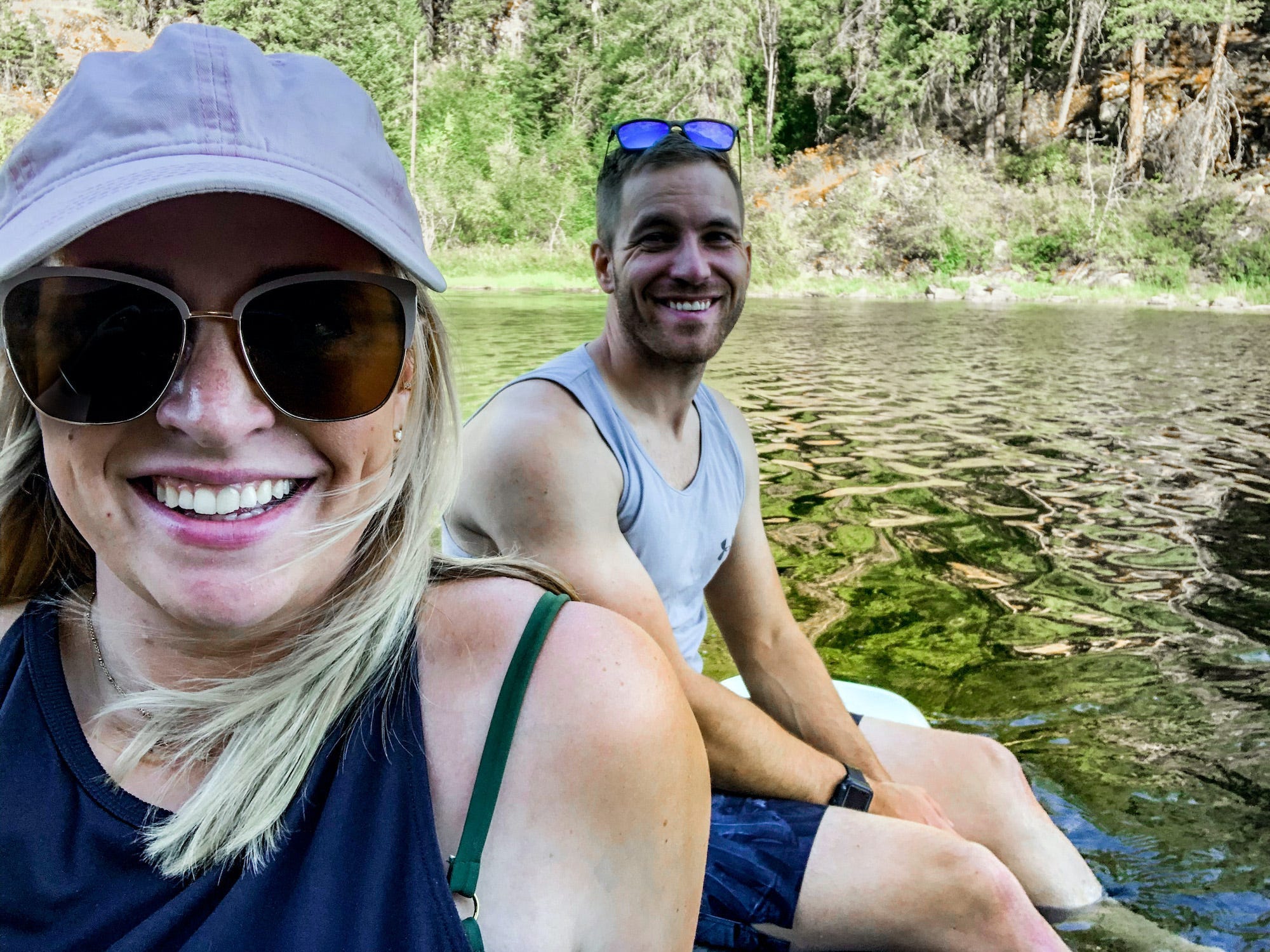 Emily FeelyTheir rent was too expensive.

When the Feelys had their second daughter in 2019, they realised they couldn’t afford to keep paying rent on the home they were based in.

“The costs were too expensive, and we had to make a change to be able to live within our means,” Emily said.

They considered buying the home they were living in at the time, but the mortgage payment would have been about the same as the cost of rent.

The Feelys decided an RV was the solution to their problem. 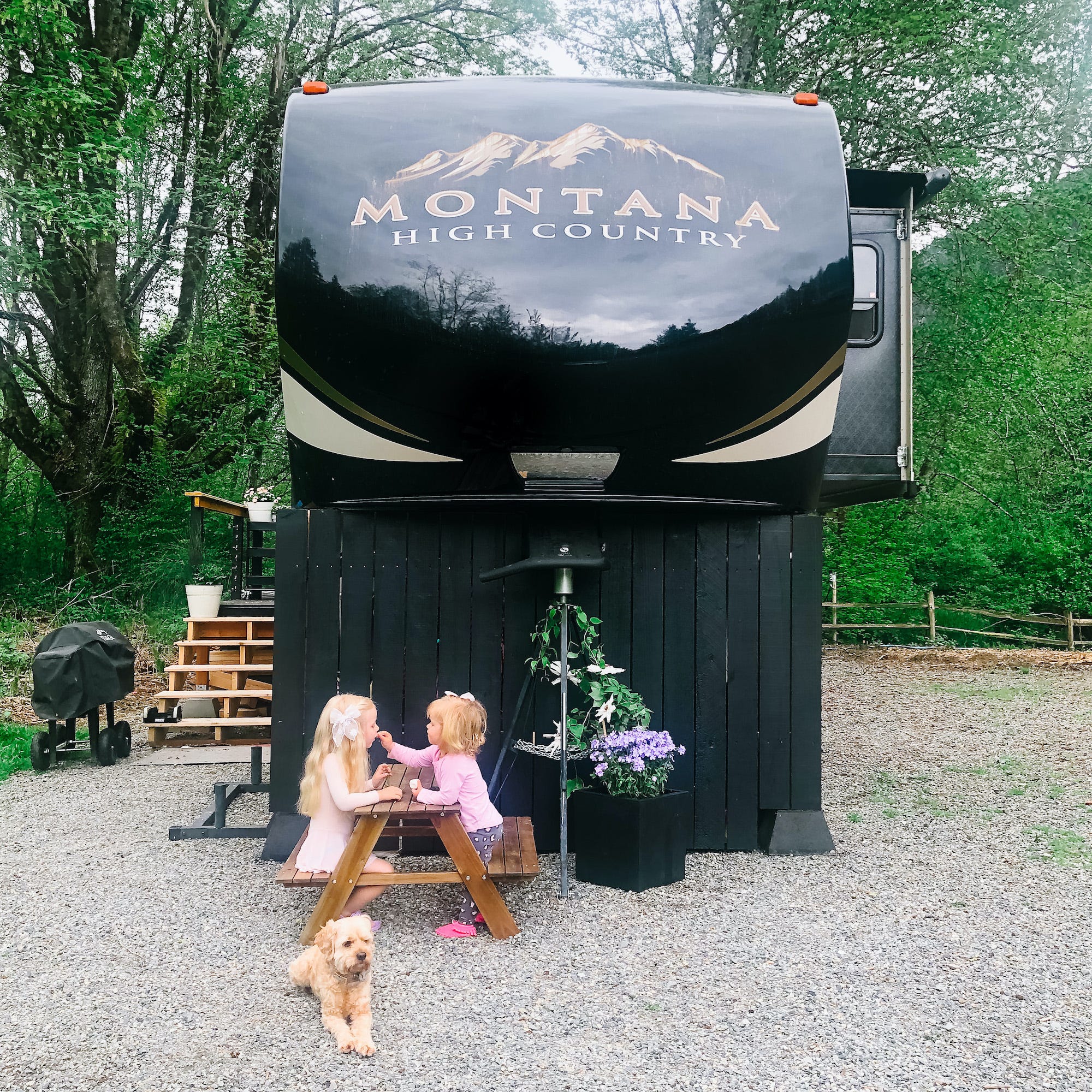 Emily brought the idea up to Charlie, and he quickly agreed it was the right decision for them.

“Within two hours, we had made the decision that we were going to sell everything and move into a fifth wheel,” Emily said.

They ended up buying a Montana High Country 370br in April of 2019, with just six weeks until their lease ended. The RV took about four weeks to renovate.

They moved into the fifth wheel in July 2019 with their daughters and dog, and they have been there ever since.

Emily describes herself as a “recovering maximalist,” which you can see in her decor style. 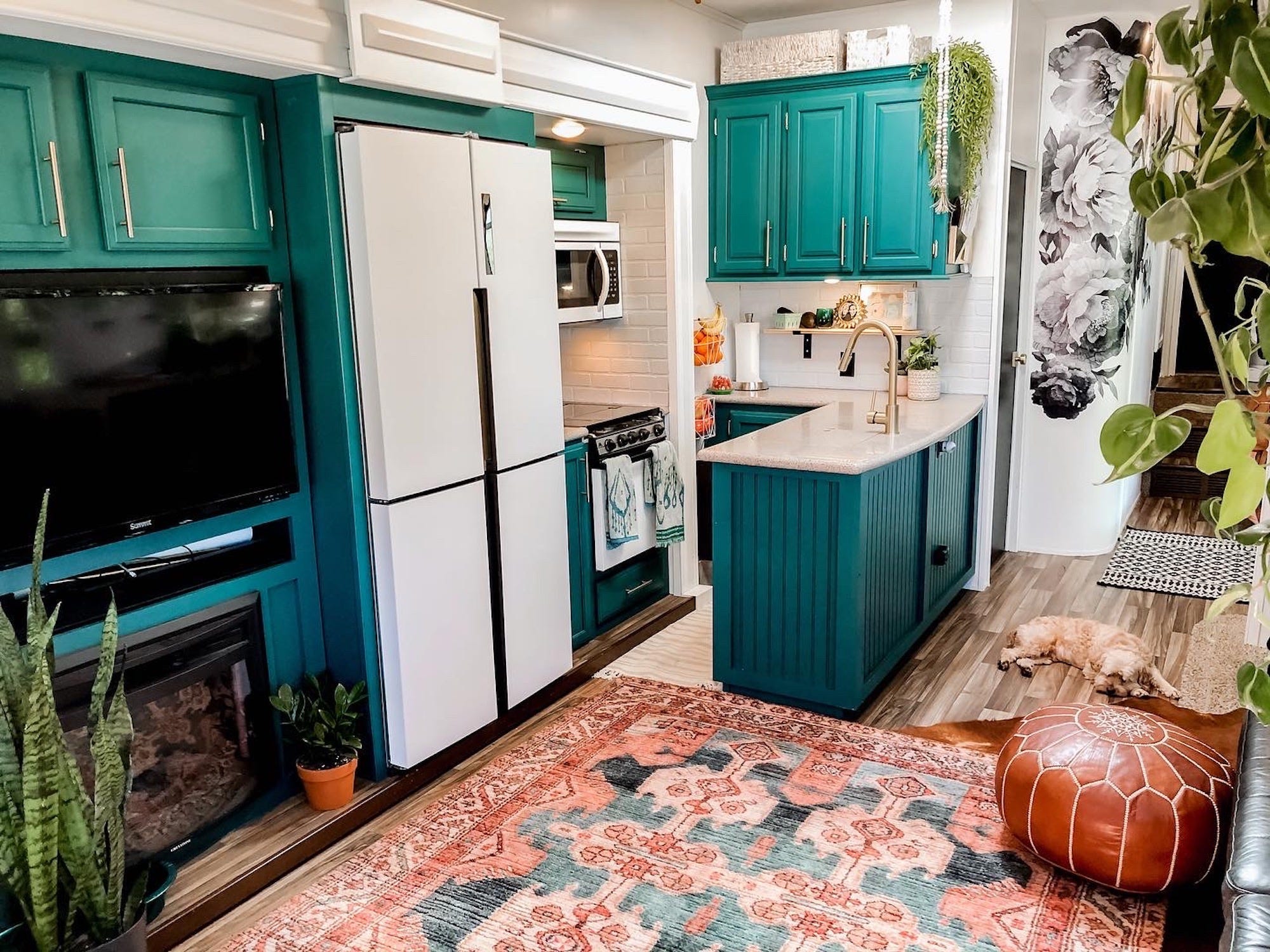 Unlike many people who live in tiny homes, Feely didn’t choose a neutral colour palette for her RV. Instead, she filled the tiny home with colour and functional furniture, making the space work for her family rather than the other way around.

She was inspired by the Danish concept of hygge as she decorated her RV, as it focuses on comfort and decorating a home with the things you actually need in mind.

“I want you to walk into my home and I want it to represent who I am,” Feely said of her approach to decorating her home. “I want to welcome you and make you feel comfortable.” 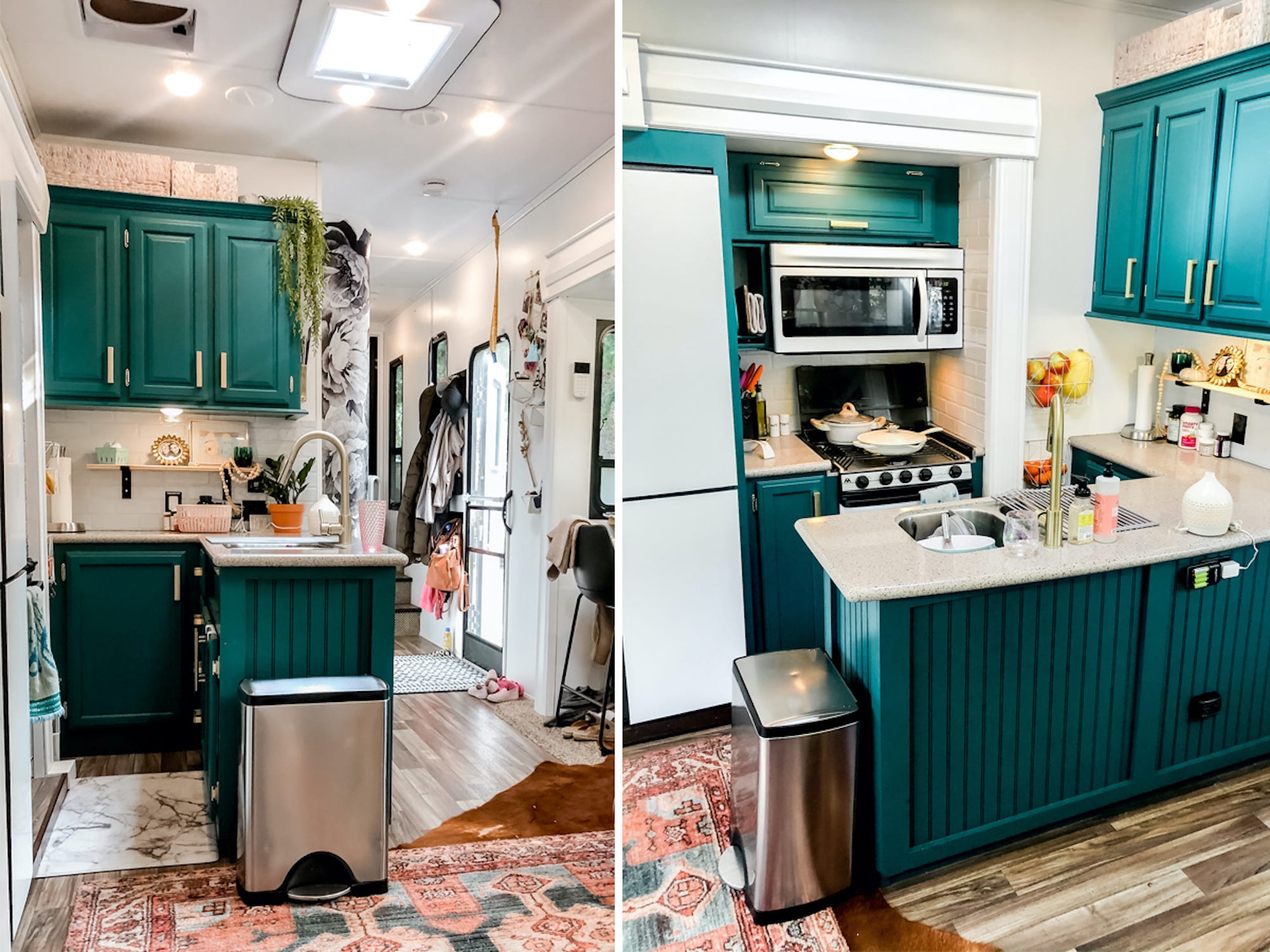 Emily told Insider that the kitchen is one of the areas of the home they made the most changes to.

The bright cabinets immediately catch your eye, and the counter separates the kitchen from the rest of the living space, making it a distinct room. 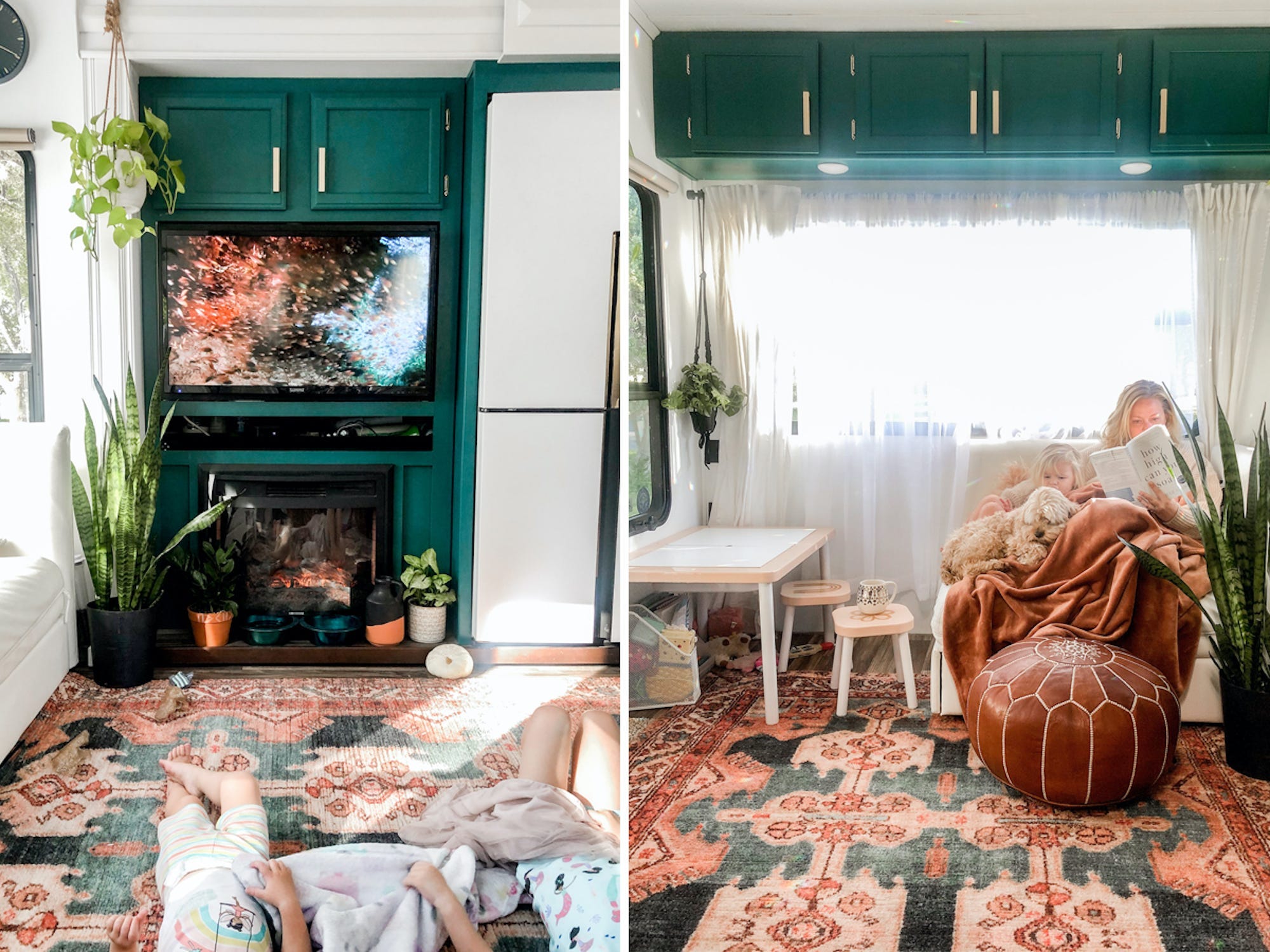 The family’s RV doesn’t have a loft area like many RVs do, which allowed them to build cabinetry throughout the home in a way that doesn’t take up too much space.

They removed all of the original furniture from the living room, replacing it with a white couch, a colourful rug, and plants.

The white couch is a pull-out bed, so the Feelys have room for visitors.

The living room also has a multifunctional table for Charlie and Emily. 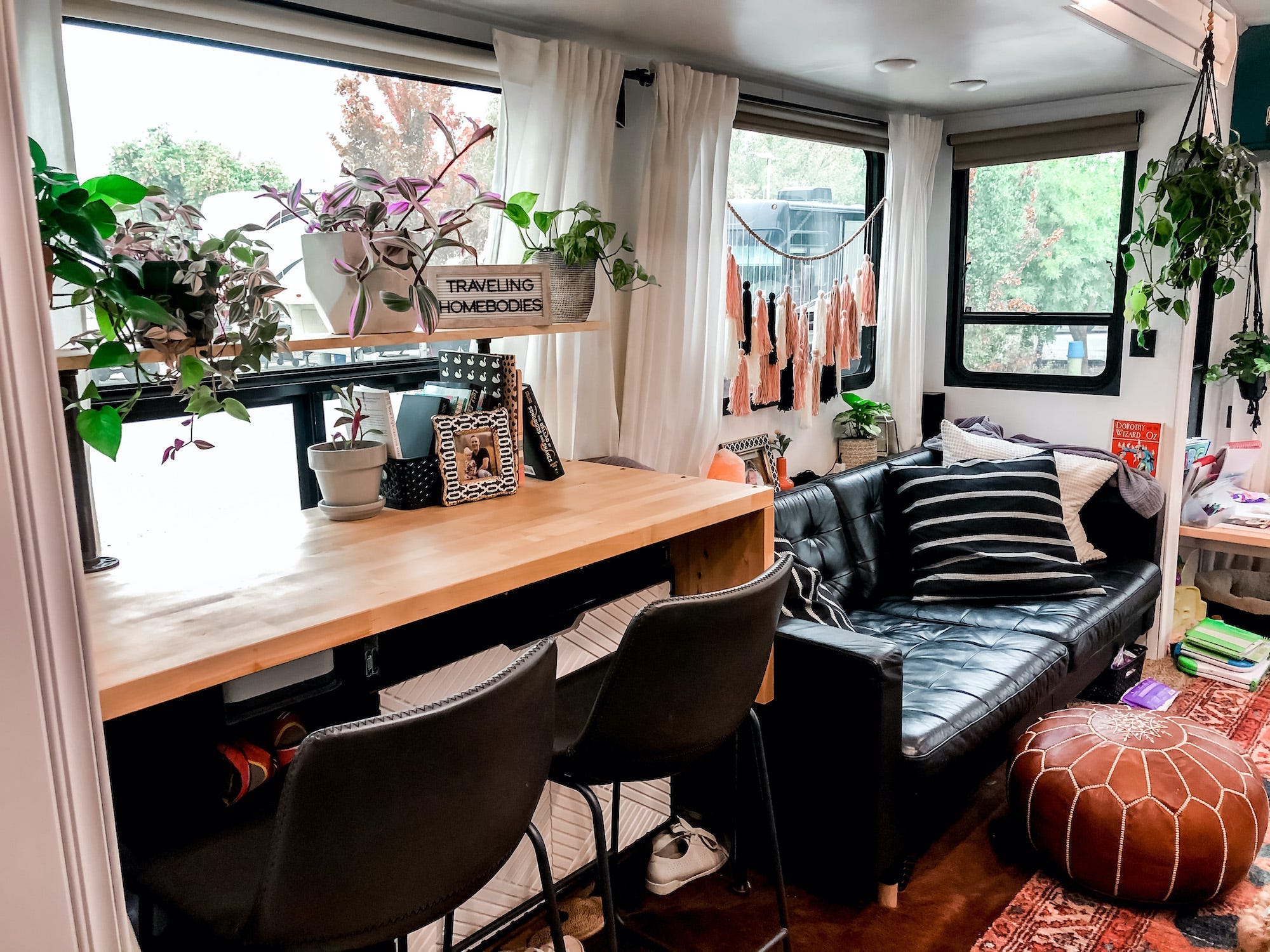 “That space changed a number of times for us,” Emily told Insider. “It was a dining room, it was an entryway, it was a desk, and those three separate things were never quite what we needed.”

They decided to make it into a space that could fulfil all of those needs, finding a table that can work as a desk and dining space, and it also features storage bins underneath for shoes.

“A lot of people say you shouldn’t bring something into your RV that doesn’t do at least two things, and I’d say that’s true in a lot of ways,” Emily said of the space.

The Feely girls have their own workspace in the living area. 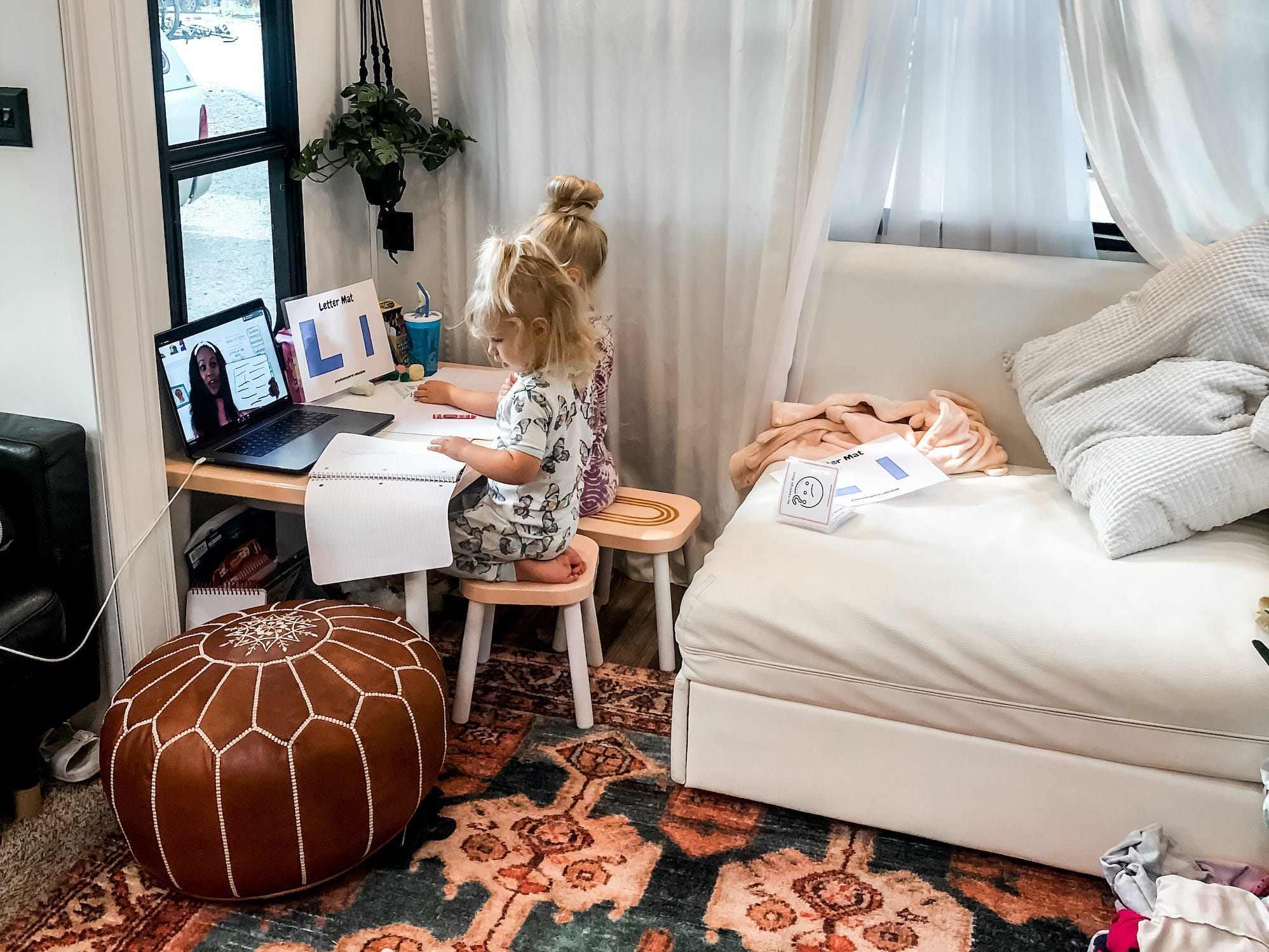 Emily FeelyThe girls have their own work table.

“They eat there, they colour there, they read books there,” Emily said of the tiny table.

It’s like a miniature version of their parents’ multifunctional space.

The children also have a private bedroom. 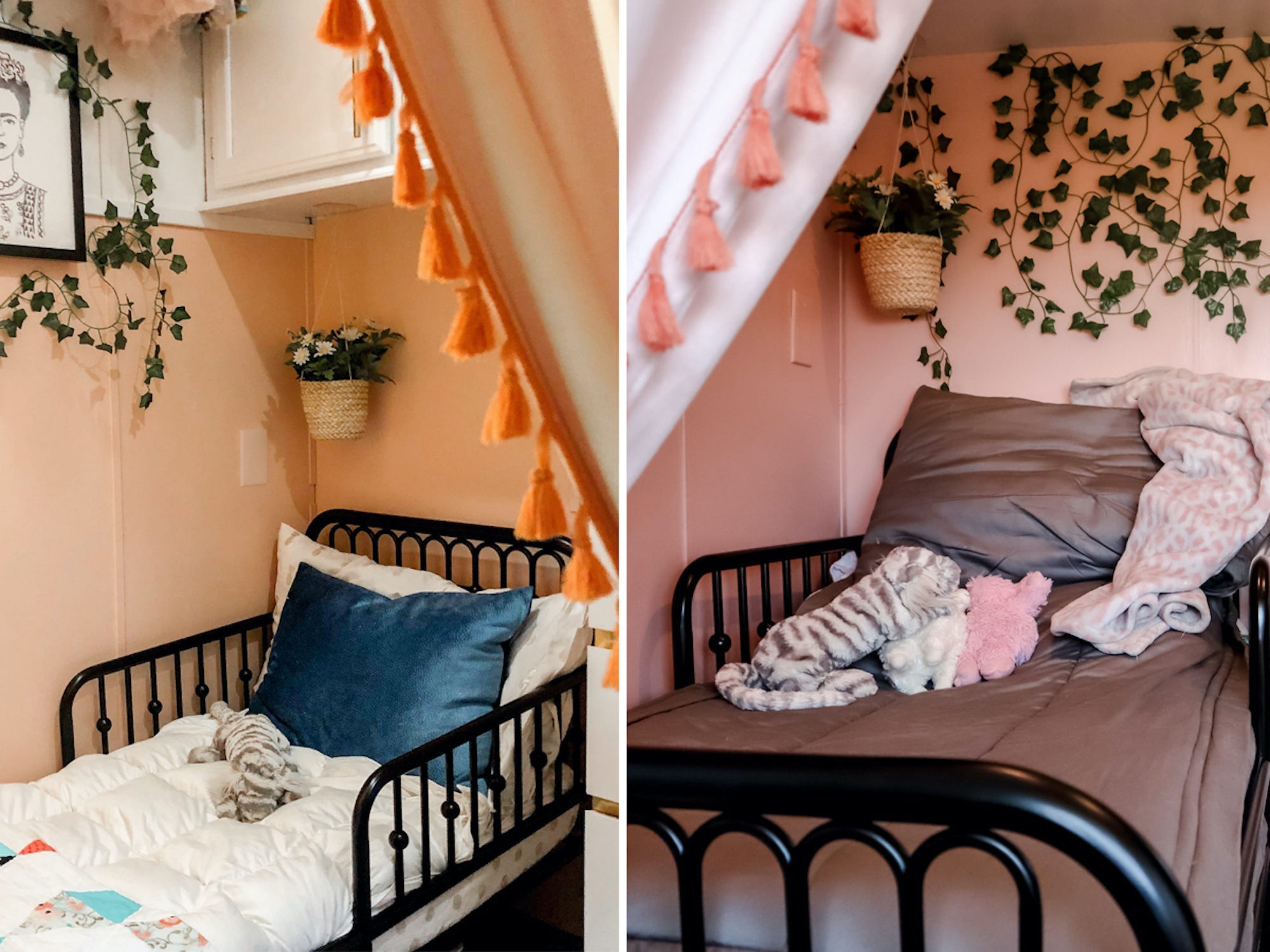 Emily FeelyThe girls have their own room.

There’s a bed for each of them, and their toys live in the room as well. It has wall cabinets for extra storage.

“They love playing in there and often stay in there for hours at a time,” Emily said of her daughters’ feelings about their room. “It is an amazing thing.”

The master bedroom is also full of storage. 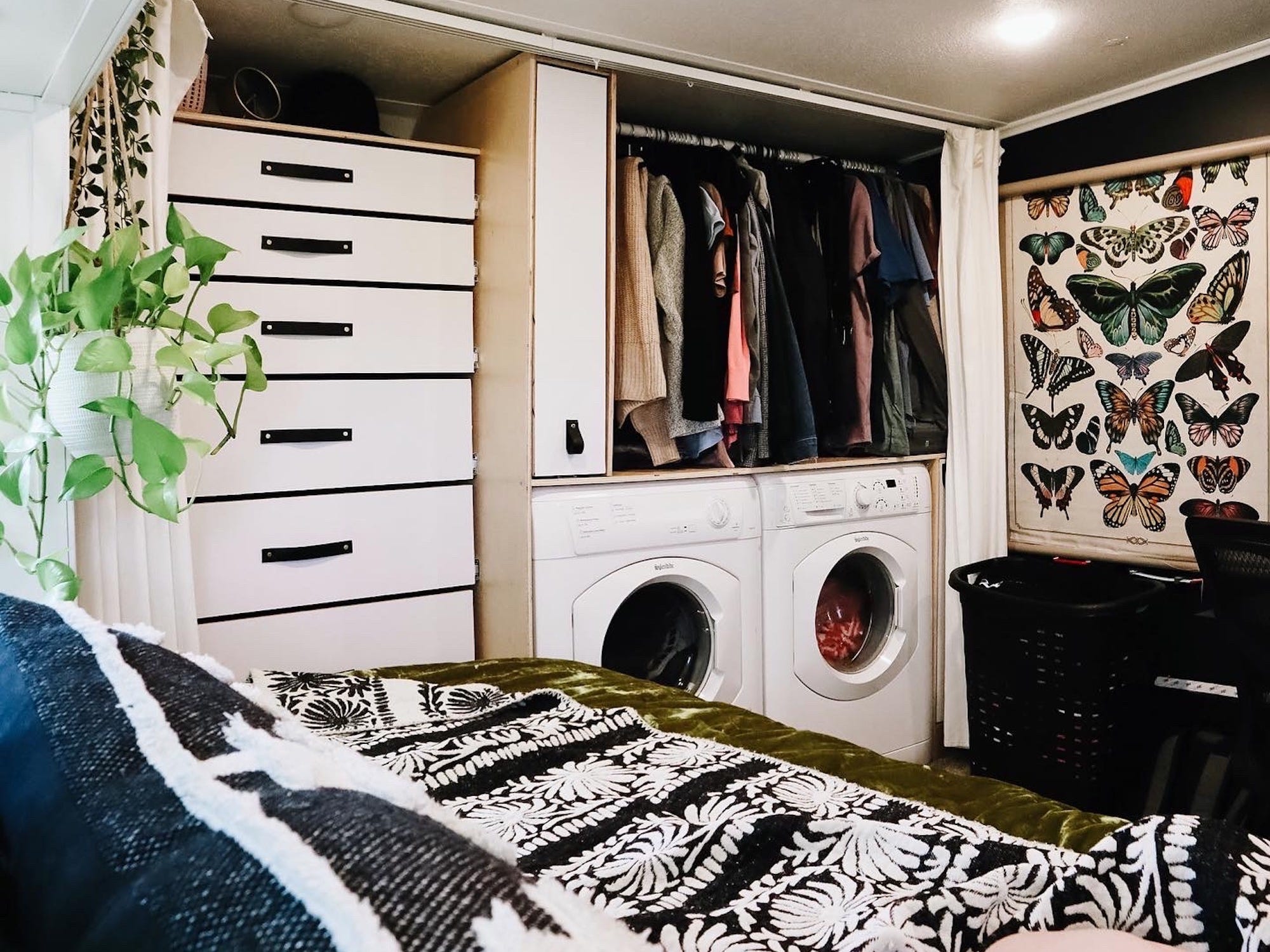 “My husband built a custom closet, because he has experience in high-end custom cabinetry,” Feely said. “He built basically my dream closet.”

The closet has drawers and hanging storage, as well as a washer and dryer.

“I always laugh because I got a huge upgrade when I moved into an RV,” Emily said of the closet.

The master bedroom also has a large bed and a workspace for Charlie. 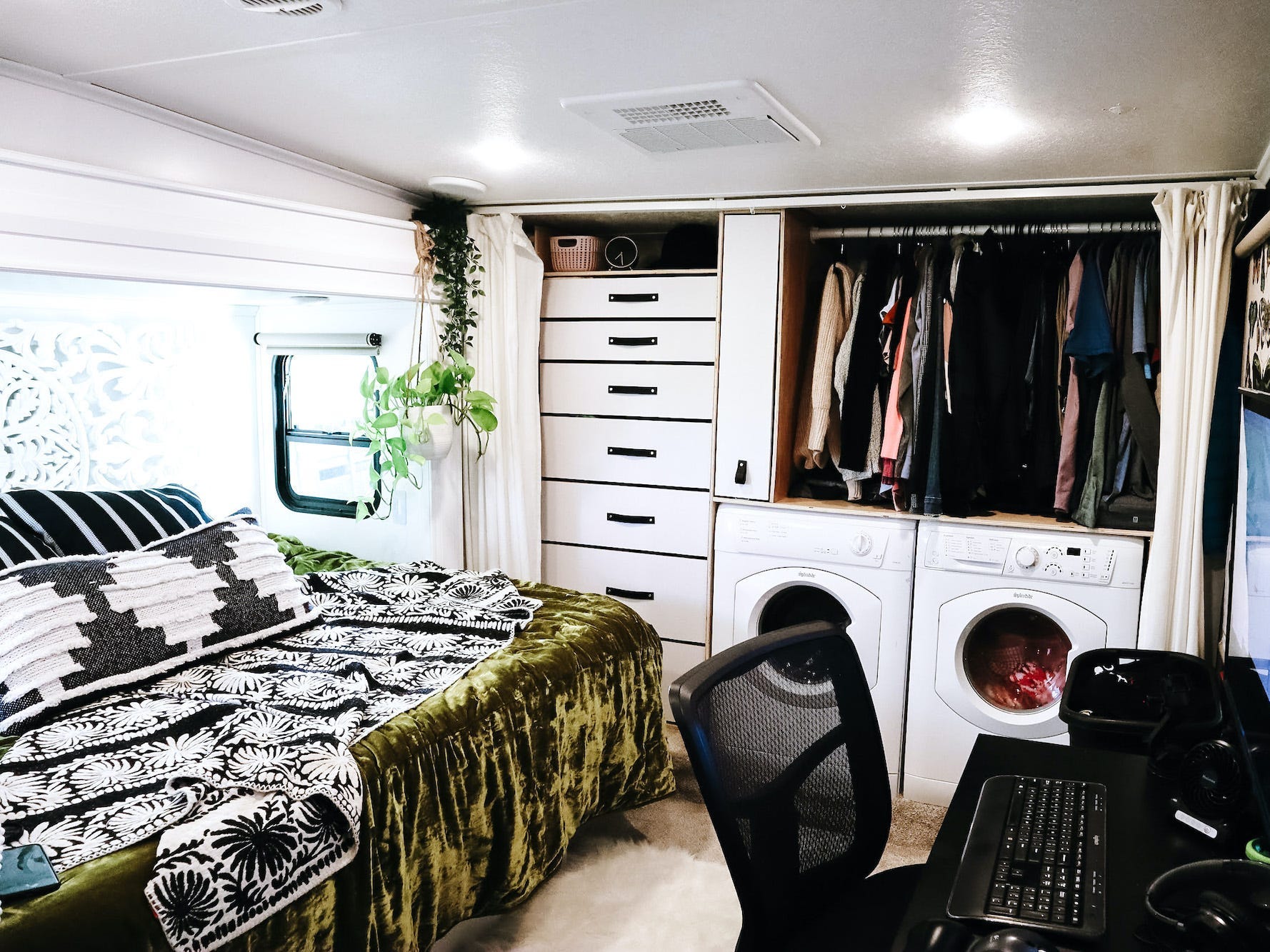 Emily FeelyCharlie’s workspace is in the master bedroom.

The room has a drop-leaf desk that can be folded up when the Feelys want more space.

Charlie’s computer monitor also doubles as a TV for the bedroom.

The bathroom is small but colourful. 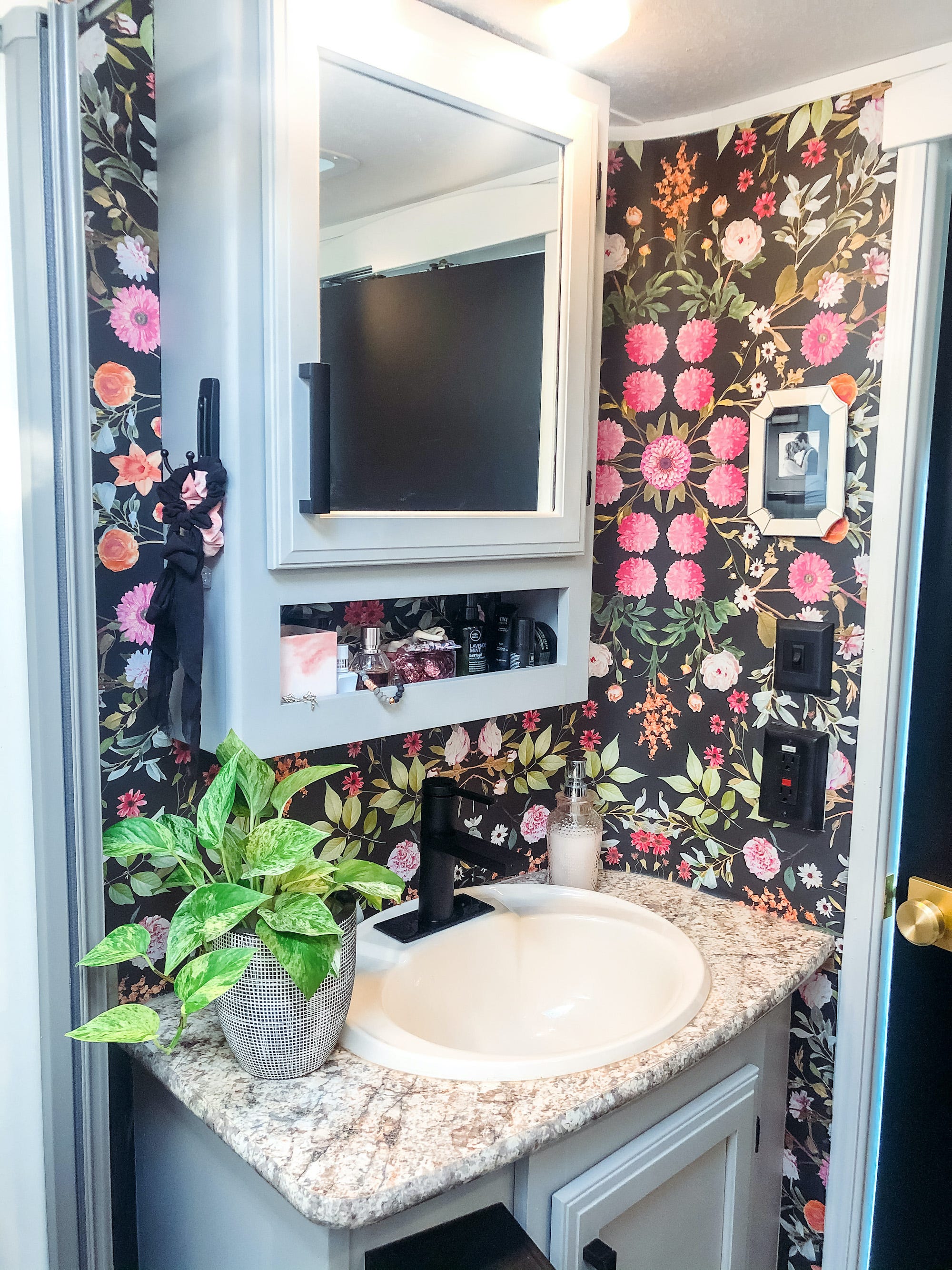 Emily packed the bathroom with colourful wallpaper that adds to the fun feel of the home.

“I think people are afraid to go bold in a small space, but for me, I found that finding a way to pull the things you love into your space will make it so much more enjoyable,” she said.

Their lifestyle saves them around $US2,000 each month. 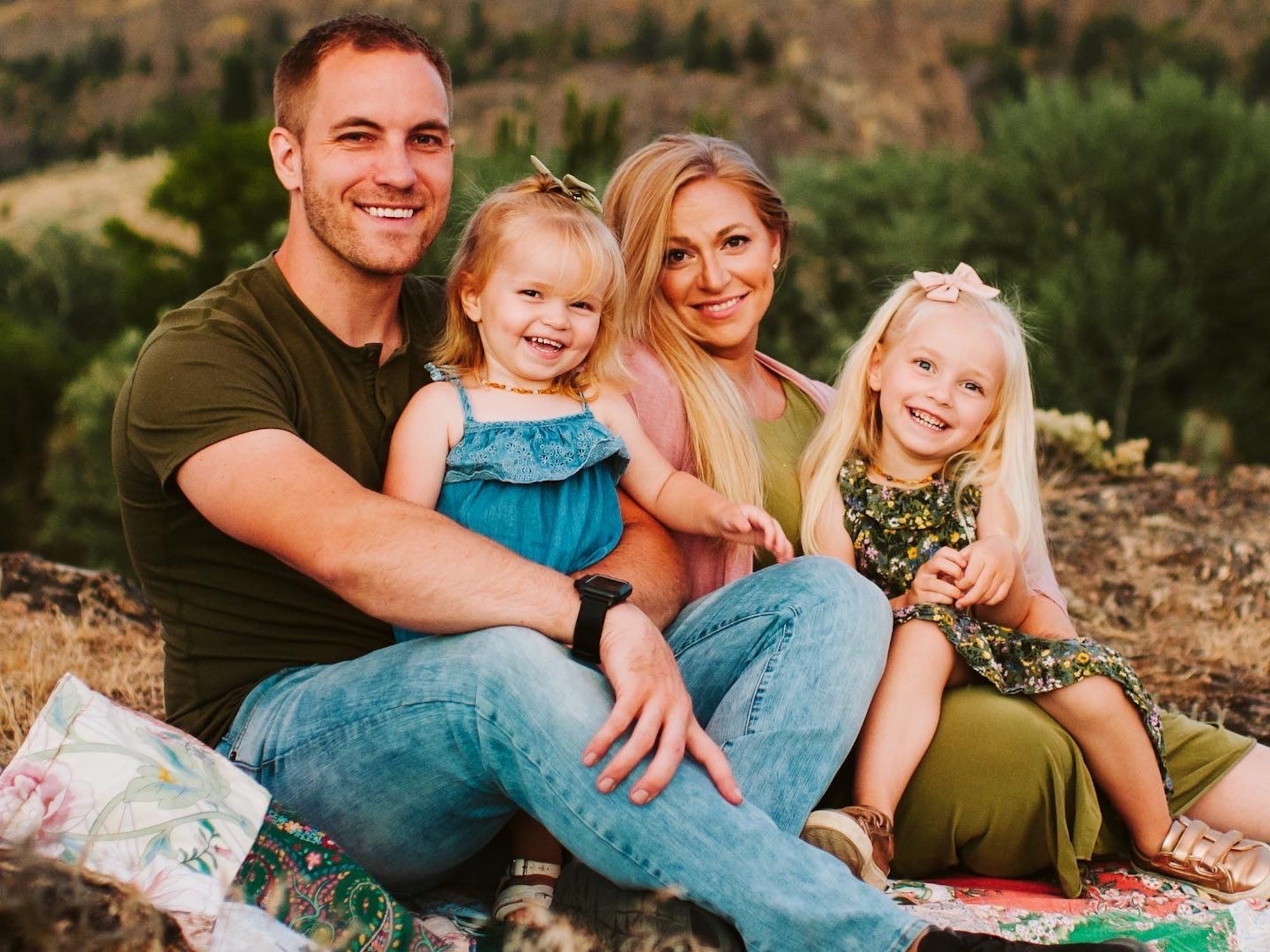 Emily FeelyThey save money in their home.

The Feelys are stationary in their RV, so they don’t have travel expenses.

The financial freedom the RV has given the Feelys has made the move absolutely worth it for them, but Emily said the process of downsizing was still difficult.

“The actual downsizing process is a consistent chore,” Emily told Insider. “That first wave of getting rid of all of our things was shocking.”

“But as time has gone by, we’ve gotten rid of so many of the things that we thought we needed,” she said. “And now we realise that we really didn’t need them.”

Emily said people who are considering downsizing should “start getting rid of your things now.” 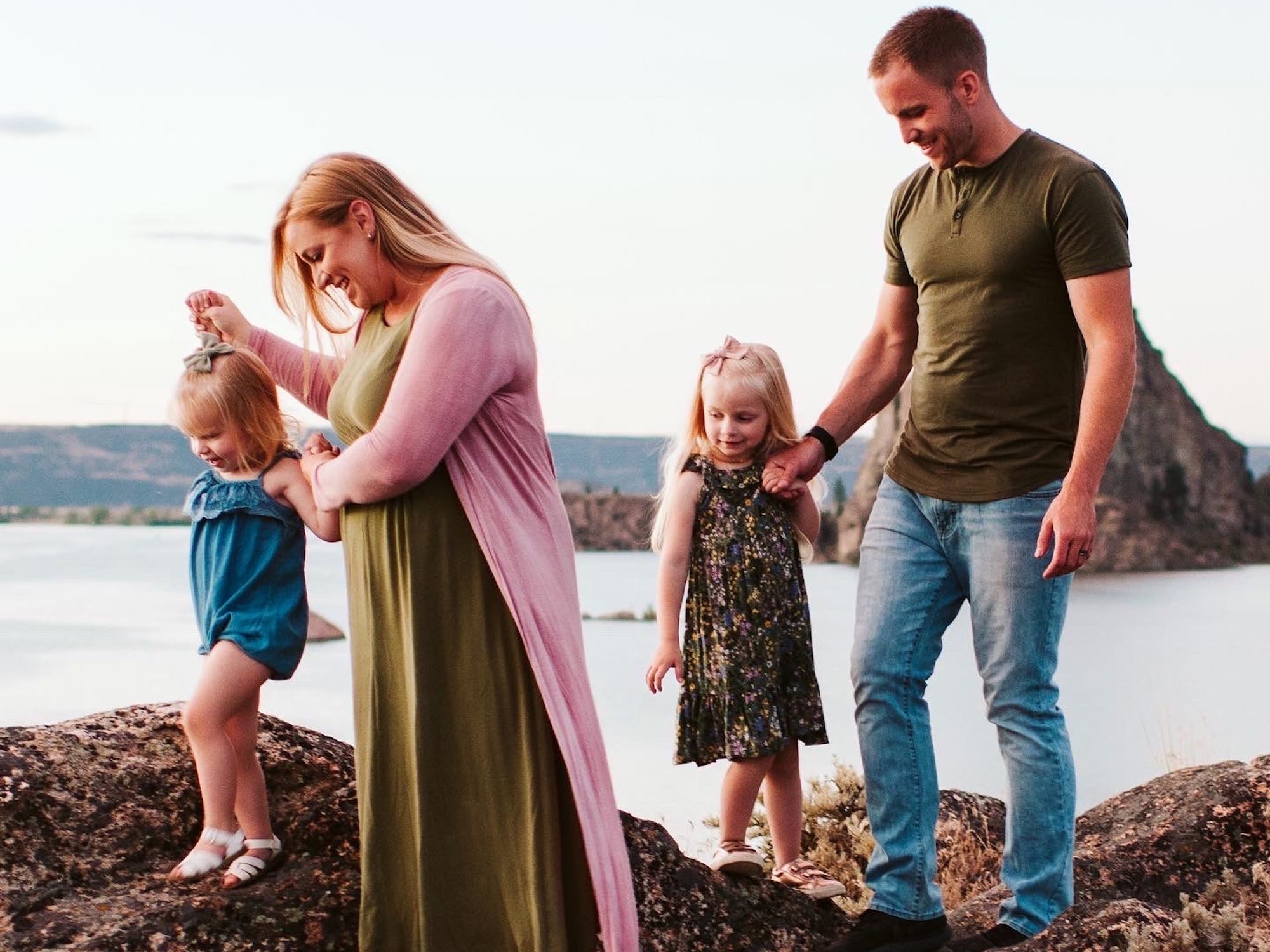 Emily FeelyDownsizing gets easier with practice.

If you start giving away or selling belongings before you actually move into a tiny space, the change won’t feel as jarring when you get into a home with a smaller square footage, according to Feely.

She also said the change to a tiny home likely won’t be as overwhelming as you think.

“Start to pay attention to how much square footage you consume in your day-to-day life,” Emily said. “Before we moved into the RV, I really had no idea what that looks like. I started paying attention to that and I realised my kids are by my side most of my day anyway, so we don’t need 1,600 square feet.”

“We occupied the same 10 or 12 feet all the time,” she added. “So there was no difference in a huge house or in a small trailer.”