'SHOULD I PUT DOWN MY BEER?' What Facebook's First Office Looked Like ‘Now Entering’ documentary via The Huffington PostA Facebook cofounder does a keg stand with help from coworkers.

Today, 10 years after Facebook launched, the company has a sprawling campus in Palo Alto and it’s building a mini town for its employees.

What did its first-ever office look like, back when it was a tiny startup in a crammed space?

The Huffington Post dug up an old video interview with Mark Zuckerberg from June 2005. The interview took place in the company’s first Palo Alto office on a day when Facebook was celebrating its 3 millionth user (now it has more than 1 billion).

The office was in downtown Palo Alto on Emerson Street. It had 5 or 6 offices, one conference room, and a large common area.

Zuckerberg was interviewed in the designated office “lounge.” He was barefoot, sipping a beer.

The whole early Facebook clan is in the video, including YouTube founder Steve Chen and early employee Ezra Callahan.

The old Facebook office was located on the 2nd floor, above a Chinese restaurant. You can see the staircase on the left. Executive Administrator Susie Stenson had just started working for Facebook in June 2005. There she is watching over Zuckerberg's desk. This one above the entrance way was pretty graphic. The old office had one large common area with five or six additional offices and a kitchen. Most employees worked in the kitchen area. Convenient for snacking! The fridge was full of Coke, Sprite, and Starbucks Frappuccinos. To celebrate its 3 millionth user, Facebook bought a keg. Mark Slee put it to good use while Andrew McCollum and a lady friend hung out in the background. Facebook cofounder Dustin Moskovitz did a keg stand with help from Ezra Callahan (on right) and Mark Slee. Then he drank a well-deserved beer. Zuckerberg did too. 'Should I put down my beer?' he asked the interviewer. 'I think Facebook is an online directory for colleges...If I want to get information about you, I just go to TheFacebook, type in your name, and it hopefully pulls up all the information I'd care to know about you,' Zuckerberg said. In 2005, Zuckerberg had narrow vision for Facebook. 'I mean, I just really want to see everyone focus on college and make a really cool college directory product,' he told the interviewer. 'There doesn't necessarily have to be more...Part of making a difference and doing something cool is doing focusing intensely.' Check out the full five minute interview below: 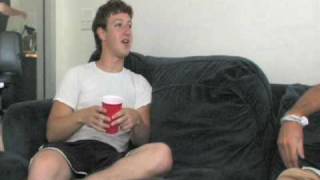 To learn all about the people in this early video, check out: