A former Facebook employee who has leaked internal documents to the press revealed herself on Sunday and shared more critiques about the social media giant and its chief executive.

In an interview with “60 Minutes,” Frances Haugen described the harm she believes is perpetuated by Facebook, including not properly addressing hate on the platform, contributing to eating disorders and suicidal thoughts, and making decisions in its own best interest rather than that of the public.

She called out founder and CEO Mark Zuckerberg, saying his actions cause harm despite his initial intentions for Facebook.

“I have a lot of empathy for Mark,” she said, adding that he “never set out to make a hateful platform.”

“But he has allowed choices to be made where the side effects of those choices are that hateful, polarizing content gets more distribution and more reach,” Haugen said.

In a statement provided to Insider, Lena Pietsch, Facebook’s director of policy communications, said: “To suggest we encourage bad content and do nothing is just not true.”

“Every day our teams have to balance protecting the ability of billions of people to express themselves openly with the need to keep our platform a safe and positive place. We continue to make significant improvements to tackle the spread of misinformation and harmful content,” she said.

Haugen, a former product manager at the company, gathered internal documents and shared them with the press in an attempt to prompt change at the company, according to The Wall Street Journal, which based an investigation earlier this year on documents she provided them.

Haugen left Facebook in May, feeling that the company was prioritizing its growth over what its own research found was good for the public and its users.

She plans to testify before Congress this week to encourage the federal government to impose regulations on Facebook. 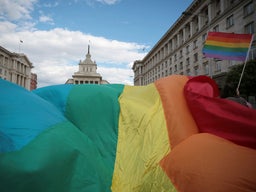