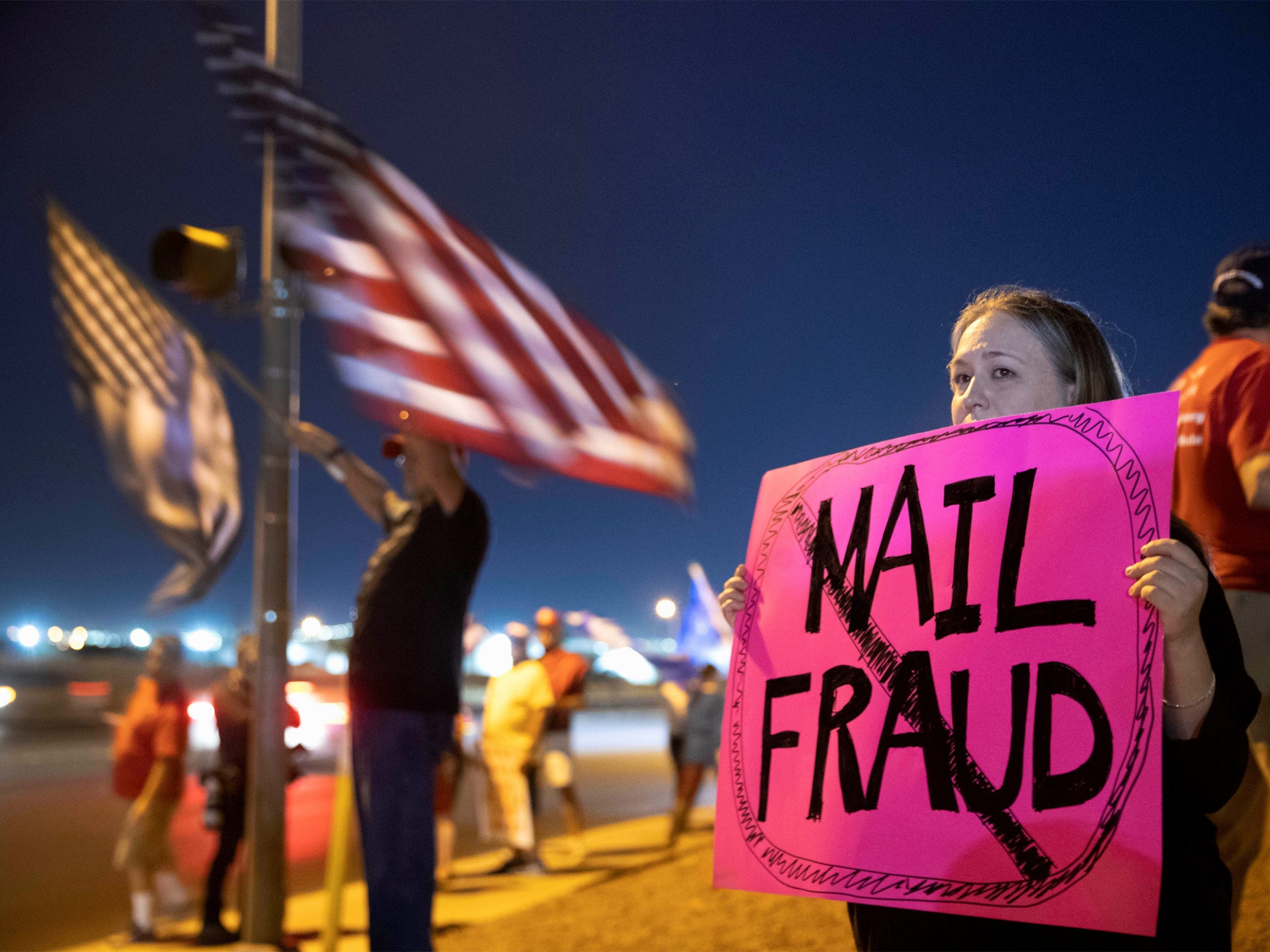 Reuters/Steve MarcusA woman holds a sign during a ‘Stop the Steal’ protest at the Clark County Election Centre in North Las Vegas, Nevada.

Pro-Trump activists have found a new online home to protest vote-counting less than 24 hours after Facebook shut down an organising group of more than 365,000 members for breaking its policies around inciting violence.

Thousands have flocked to such groups on MeWe, a social platform emphasising users’ rights and privacy that anti-lockdown protesters turned to earlier this year after they were kicked off Facebook. Nearly a dozen “Stop the Steal” groups have popped up since Thursday on MeWe, Business Insider has found, filled with posts claiming voter fraud and organising state-by-state protests of election results.

“Stop the Steal,” a conspiracy theory that accuses Democrats of stealing the presidential election for Joe Biden, is just one of the rallying cries some Republicans have latched onto to dispute the results of Tuesday’s presidential election. These baseless allegations â€” which echo similar ones made by President Donald Trump on Twitter â€” have encouraged some to cast doubt on the legitimacy of the election outcome as votes continue to be counted across the US, including in some key battleground states.

The real-life results of these claims and have already been seen across the country. Protesters, some armed, have gathered at vote-counting centres in Arizona, Michigan, Georgia, and Nevada to demand those inside stop tallying up votes from mail-in and absentee ballots.

The vote counts from Arizona, Georgia, and Nevada, as well as from Pennsylvania, are increasingly signalling a victory for Biden. Insider and our partners at Decision Desk HQ called the race for Biden earlier Friday.

Trump supporters’ mobilisation efforts quickly surfaced in the form of a Facebook group called “Stop the Steal,” which accumulated more than 365,000 members in just two days. Facebook said Thursday it shut down the group because it was organised around “the delegitimization of the election process,” and some members were making “worrying calls for violence.”

Even before Facebook took action against the Stop the Steal group, an alternative group on MeWe had been created in anticipation of a ban.

Since Facebook’s action Thursday, the number of members in the biggest MeWe “Stop the Steal” group has spiked. Users have splintered off into state-by-state “chapters” to localise their boots-on-the-ground efforts at state capitals and vote-counting centres in Tennessee, Pennsylvania, Ohio, and Maryland.

MeWe, founded in 2012, has long presented itself as the antithesis to Facebook, as a social platform with no ads, no sharing of user data, and no algorithmic manipulation of what appears in a user’s feed. But MeWe’s hands-off approach has attracted those who have been kicked off of Facebook and Twitter for violating those platforms’ policies. Earlier this year, anti-lockdown protesters fighting stay-at-home orders started organising on the network. While many of MeWe’s groups are home to innocuous discussions of conservative values, some of MeWe’s most popular groups concern extreme views, like anti-vaccine rhetoric, white supremacy, and conspiracy theories.

Another social network, Parler, has also emerged as an outlet for Republican officials, conservative pundits, and Trump supporters. The #StoptheSteal hashtag has more than 15,000 “parleys,” or mentions, on the platform. There, conservative influencers and activists have promoted vote-counting protests to their followers.

The term “Stop the Steal” was made notorious during the 2016 presidential election by GOP political consultant Roger Stone, who formed an activist group under the same name and threatened “days of non-violent demonstrations, protests and lobbying delegates face to face” if Trump wasn’t named the Republican nominee. Stone was convicted of seven counts of obstruction of justice and other crimes and sentenced to 40 months in federal prison before his sentence was commuted by President Trump in July. Stone was also kicked off of Facebook in July, with Facebook claiming he ran a network of more than 100 “inauthentic” pages and accounts to spread disinformation.