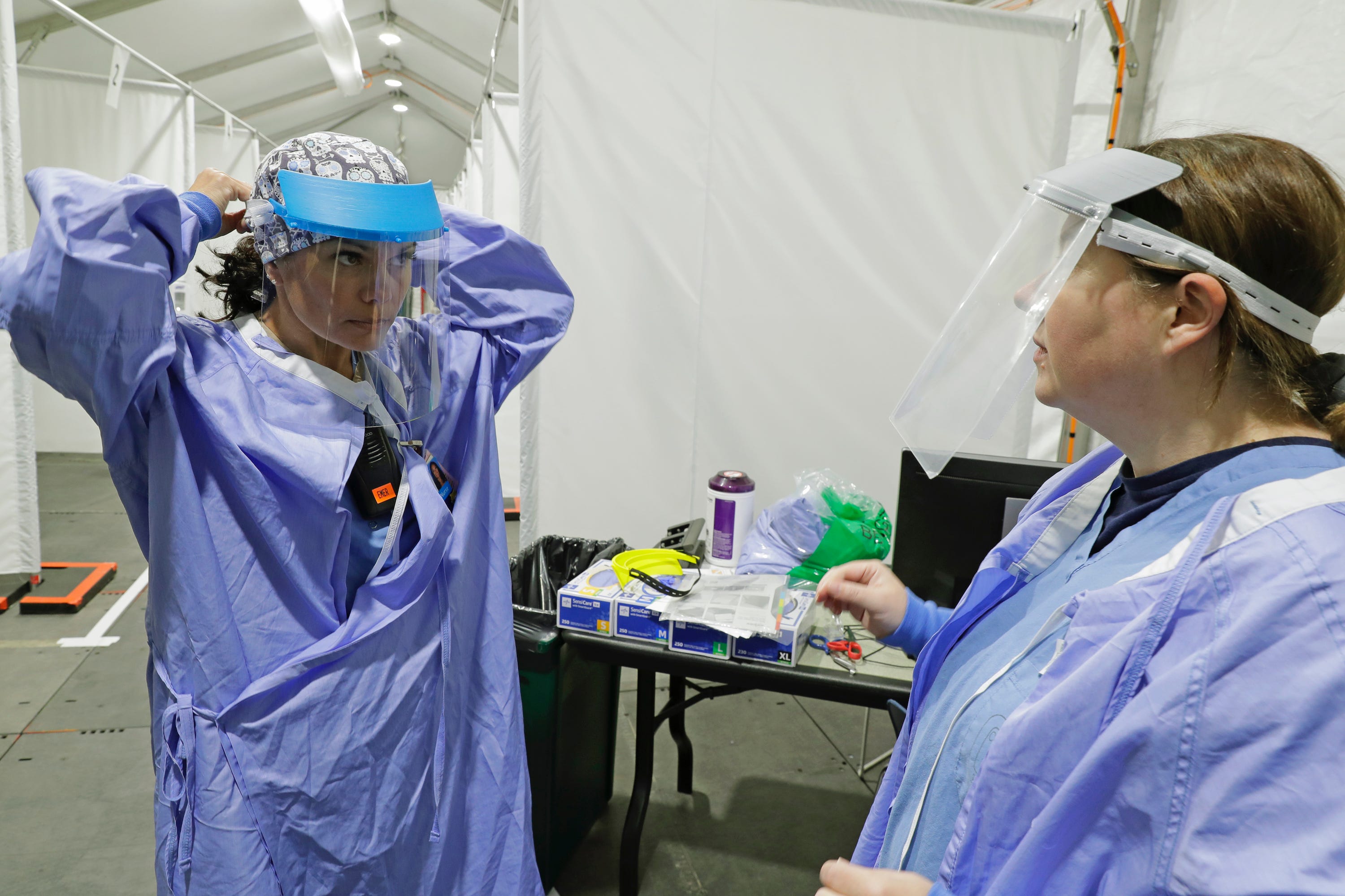 The nation’s stockpile of 3D printers is being corralled in the fight against the coronavirus pandemic.

Nearly 600,000 people in the United States have been infected with the virus, and as it continues to spread across the US, it’s highlighted shortages of supplies at hospitals nationwide. Healthcare workers rely on personal protective equipment (PPE) to protect themselves from getting sick or potentially infecting patients, but doctors and nurses from New York to California have reported a lack of supplies, which could lead to the outbreak worsening.

Now, facilities with stores of 3D printers are jumping in to help. While more urgent life-save equipment, like N95 respirator masks and ventilators, can’t be consistently or quickly be 3D-printed, the process is being used to produce millions of plastic face shields for medical workers.

Tech and transportation giants like Apple, HP, and Ford have pivoted to printing face shields, while 3D-printing facilities at universities like Harvard and Syracuse have jumped in to help supply face shields to local hospitals.

And it’s not just large universities and corporations who are getting involved in the effort. America Makes, a national accelerator for 3D printing (also known as additive manufacturing), has partnered with the Food and Drug Administration, Department of Veterans’ Affairs, and the National Institutes of Health to build a repository where manufacturers can upload their 3D-printable designs. The designs are reviewed and then fast-tracked to the NIH 3D Print Exchange, which is an open site for sharing designs.

This has allowed individuals and small-batch manufacturers to start producing protective face shields too. People like former Autodesk CEO Carl Bass have started producing face shields on their own, with the goal of making more than 20,000 to deliver to healthcare providers.

Still, companies and schools with large 3D-printing facilities are likely best equipped to produce large batches of face shields. Here are some ways tech giants and universities are stepping in to help during the outbreak.

Apple has started designing and producing face shields to help medical workers in the US.

Cook said that Apple has already delivered a batch of the face shields to Kaiser Permanente hospital facilities, which are located in California’s Santa Clara Valley. While distribution has been limited to the US so far, Apple hopes to expand to countries beyond the US.

According to Cook, Apple is planning to ship one million face shields by the end of this week, and one million per week after that.

Apple has since added a support page to its website that provides more information about the protective equipment, like how to clean and adjust the face shields.

Apple is also donating 20 million face masks to help combat the spread of the virus.

After reportedly facing pressure from students and local doctors, Harvard agreed to open up use of the Harvard Graduate School of Design’s supply of 100 3D printers to make parts for face shields.

Harvard began producing personal protective equipment last week and says it has already delivered 90 face shields to Brigham and Women’s Hospital in Boston. The school estimates it could produce components for up to 1,000 face shields in a week.

Using the materials it already has on hand, the school estimates it can make 3,500 3D-printed visors and 800 face shields.

The rocket company posted a video of its efforts to 3D-print visors for face shields.

We are proudly producing daily deliveries of 3D printed face shield components to help combat the COVID-19 crisis. Our additive machines are working 24/7, and the volunteers for this effort also support #BE4 engine development. We are grateful for their dedication. pic.twitter.com/GZUjA3TtRY

The company already has about 38 types of thermoplastics on hand, which are used to 3D-print visors, which the face shield attaches to.

“There’s a huge shortage across the country,” one employee said in the video.

The company then 3D-printed prototypes of its design and sent them to two hospitals for testing: Stanford and Kaiser Permanente. Carbon is known for its work with Adidas, and one material used in Adidas shoes is now being repurposed to create face shields, Forbes reports.

Our team is hard at work producing #faceshields which use our #LatticeEngine technology. We’re proud to help provide #PPE to #ProtectHealthCareWorkers and #FirstResponders against #covid-19. pic.twitter.com/Yj9n2GZaCC

Carbon now estimates it can deliver 15,000 face shields per week to healthcare workers, with the goal of ramping up to more than 18,000 in the coming weeks.

Multiple departments at Syracuse University came together to produce face shields using a template from a local startup.

It began with the school’s College of Visual and Performing Arts, which already had clear plastic, which it uses for thermoforming. The fashion design program then provided 250 yards of elastic in order to create the headband, according to SU. VPA handles the assembly portion, which the architecture school and engineering and computer science schools 3D-print pieces for the face shields.

So far, SU is making up to 90 face shields each day, which are handed out to local hospitals in Upstate New York, the university reports.

HP is working with partners who own its 3D printers to provide free designs for face shields.

HP has is producing face shields – along with mask adjusters, nasal swabs, hands-free door openers, and respirator parts – to help combat the spread of the virus.

HP said it’s working with the global community of those who own its 3D printers to make the equipment, and has now produced more than 50,000 parts.

The tech giant is also offering its 3D printable designs for the face shields for free.

Loyola University Maryland is using its 3D printers to make face shields for hospitals in Baltimore.

Loyola University Maryland has started using its stockpile of 3D printers to produce face shields for medical workers in the Baltimore area, according to the university’s news service.

Loyola is creating both the top and bottom plastic pieces for face shields, as well as full pieces of equipment, at three different labs at the university. The school is donating them to Johns Hopkins Hospital, the University of Maryland Medical System, LifeBridge Health, and Sinai Hospital.

Duke University and UNC Chapel Hill teamed up to produce face shields to distribute to their respective hospitals.

Duke has an arsenal of 65 3D printers, which have been working overtime to produce 150 face shields per day, according to the university.

But because the need for face shields is so high right now, the schools say they are turning over production to a larger-scale manufacturer who can make face shields more quickly. Once that happens, Duke says it expects to produce up to 10,000 pieces of equipment.

On March 19, Ford decided to start manufacturing protective equipment for medical workers – by April 6, the automaker announced it had delivered more than 1 million face shields.

Thank you to the many #essentialworkers on the front lines. We hope these shields help keep you protected as you continue helping others in the fight against #COVID19. pic.twitter.com/nMBQEXcMQF

The face shields are being handcrafted by workers who are volunteering despite the industry shutdown, according to the Detroit Free Press.

Ford is currently producing over 200,000 face shields per day, the Free Press reports, delivering them to local hospitals in Detroit as well as first responders in New York City.

Northwestern University has figured out how to produce a high volume of face shields with just a single 3D printer.

In October, researchers at Northwestern introduced a new 3D printing technique called “high-area rapid printing,” or HARP. The technique uses just one 13-foot-tall printer that can print about half a yard per hour, according to the university.

Now, that technique is being put to use to produce face shields. Volunteers have been running the machine 24/7, producing 1,000 components for face shields every day – a production rate that would typically require a fleet of 3D printers.

“HARP is so fast and powerful that we can put a meaningful dent in that need,” Northwestern researcher Chad A. Mirkin told the university’s news service.

The school is producing the face shield headbands, while a local manufacturer will produce the plastic shields. Another company will sanitize the parts and package them into kits to be supplied to Chicago-area hospitals, the university said.

Snap Inc., the company that owns Snapchat, is using its hardware lab to make face shields.

The company is using the design created by Syracuse alum Budmen and his company, Budmen Industries, according to the Los Angeles Business Journal.