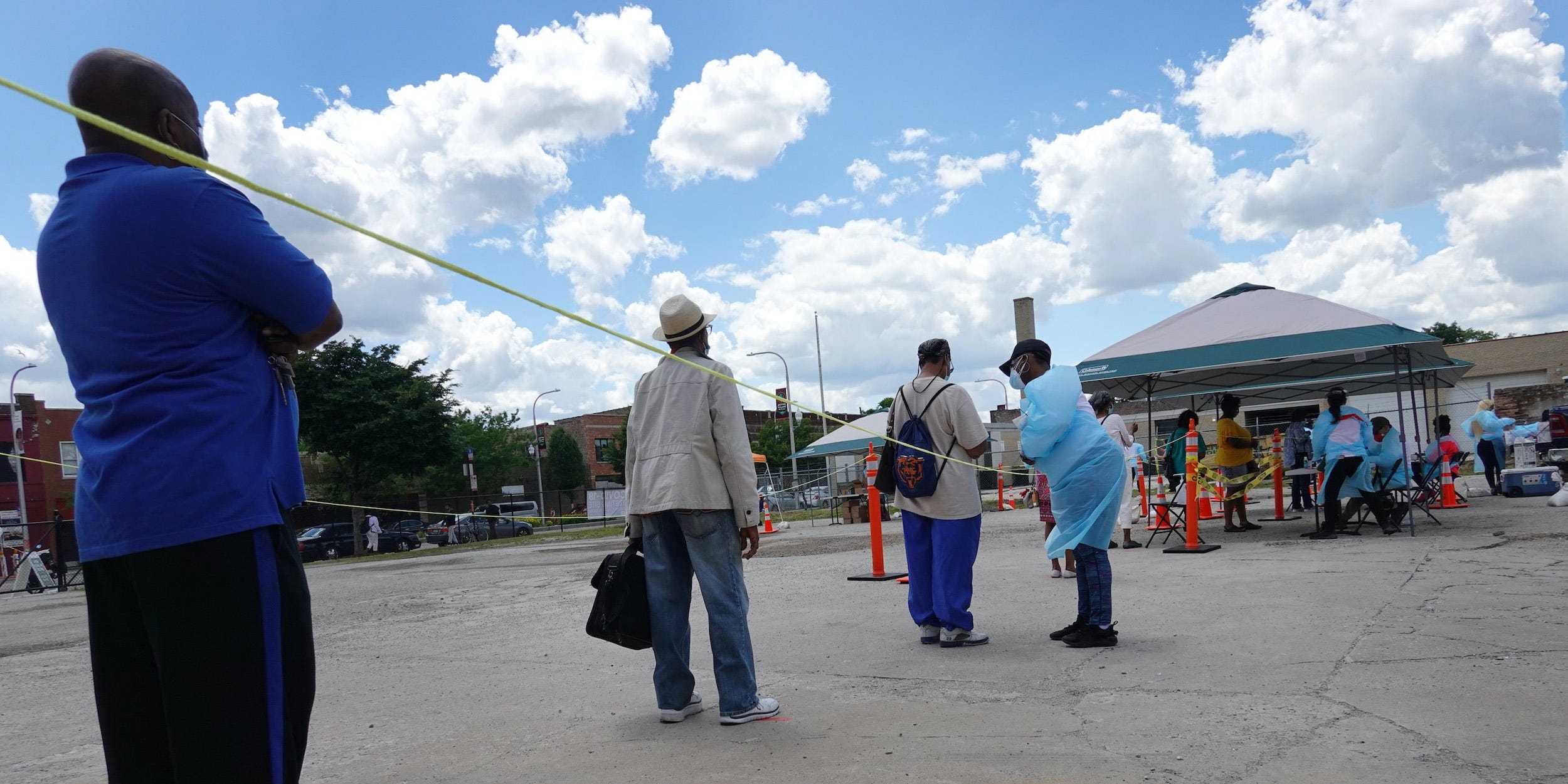 Scott Olson/Getty ImagesResidents in line at a mobile COVID-19 testing site set up in a vacant lot in Chicago on Tuesday.

Even as some US states get a handle on their coronavirus outbreaks, two months of steady progress could be undone if infection rates across the country continue to surge.

The US on Wednesday recorded more than 36,000 new infections, the most of any day yet. A majority of cases came from a handful of states, mostly in the West and the South.

California, Texas, and Florida each reported more than 5,000 new cases. More than half of the states, however, have reported a surge in new cases.

Health experts have said the surge is a result of relaxed criteria for reopening. According to the Associated Press, efforts to return to a pre-COVID-19 normal have been criticised by hospital administrators and health experts, who say they could allow for more full-blown outbreaks that put a strain on local hospital systems.

“People got complacent,” Marc Boom, the CEO of the Houston Methodist hospital system, told the AP. “And it’s coming back and biting us, quite frankly.”

As of Wednesday, the US had recorded more than 2.3 million coronavirus infections, with more than 121,000 deaths. Based on the latest trends, the main model used to estimate the impact of the coronavirus outbreak in the US now predicts close to 180,000 deaths by October 1.

While President Donald Trump has claimed the virus is under control and has urged a reopening of the US economy, experts like Dr. Anthony Fauci, the country’s top infectious-disease expert, have repeatedly warned that surges like these could lead to a situation the US is not prepared to handle, Business Insider’s Lauren Frias reported.

“The question is will they have the capability to do the appropriate and effective isolation, and contact tracing, to prevent this increase from becoming a full-blown outbreak? I’m concerned it’s happening,” Fauci told the UK newspaper The Telegraph, referring to the recent spikes in COVID-19 cases throughout the US.

“I hope the individual states can blunt that,” he added. “It could go on for a couple of cycles, coming back and forth.”

Trump has blamed the rise in coronavirus cases almost exclusively on increased testing despite evidence showing that testing capacity alone cannot explain all the spikes.

In contrast, health experts have said even more testing and contact tracing are necessary to get the outbreak under control.

Hospitalizations in Texas have doubled in the past two weeks, the AP reported. In an effort to preserve hospital space, Gov. Greg Abbott told KFDA-TV that the state might need new local restrictions. In Houston, the intensive-care units are already almost full, Mayor Sylvester Turner told the AP, and two public hospitals have limited capacity left to take on new patients.

Joseph Gerald, a University of Arizona professor in public-health policy, told the AP that emergency rooms in the state were seeing about 1,200 suspected COVID-19 patients a day. A month ago, hospitals were seeing only about 500 suspected patients. Hospitals are likely to exceed their capacity in the next few weeks if the surge continues.

As CNN noted, this surge of cases is not even the so-called second wave of infections that experts have warned about; rather, the virus is becoming entrenched for the first time in communities outside early epicenters like New York.

Officials have also reported that many of the new infections are from young adults, Business Insider’s Holly Secon reported.

Some experts attribute that to increased testing, which makes milder cases – more common among young people – more likely to be counted. Additionally, some have suggested the uptick is caused by young people ignoring social distancing because they perceive the virus as less of a threat.

The Orlando Sentinel reported that the median age of coronavirus cases in Florida fell from 65 in March to 37 last week. And in Arizona, the number of new coronavirus cases is growing twice as fast among those ages 20 to 44 compared with those over 65. Similar trends could be seen in South Carolina, Arizona, and Texas.

While the virus may cause more severe illness in older patients, those who are younger are not immune and can also require intensive care. Hospitalizations among young adults are also rising in some parts of Arizona and Florida.

“We’re seeing an increase in hospitalizations consistent with the frequency of the disease,” Theresa Cullen, the health director of Arizona’s Pima County, said, according to the local news station KOLD. “There are people in the ICU in their 20s, 30s, and 40s.”