US President Donald Trump has tested positive for COVID-19. Experts explain the possible fallout of world leaders catching the coronavirus. AP Photo/Frank AugsteinDonald Trump and Boris Johnson have both tested positive for COVID-19.

As COVID-19 continues to spread around the world, experts have weighed in on the possible social, political, and economic fallout of heads of states contracting the virus.

On October 1, US President Donald Trump and First Lady Melania Trump both tested positive for the virus after Trump’s close adviser, Hope Hicks, contracted the disease. Several outlets reported that Hicks had travelled with Trump aboard Air Force One to and from the first presidential debate earlier in the week and that White House officials had known about her condition for at least 24 hours before it was made public by Bloomberg.

Following news of Hicks’ condition, Trump said he was waiting on the results of a COVID-19 test, before tweeting later in the evening that he and his wife had been diagnosed with the disease.

Hicks is one of several people in the president’s orbit who has tested positive for the disease, which the World Health Organisation declared a pandemic in March. As of October 1, it has infected more than 34.2 million people worldwide, killed more than 1 million, and spread to at least 188 countries.

Several world leaders have also contracted the virus, including UK Prime Minister Boris Johnson and Brazilian President Jair Bolsonaro, as well as those close to them. And Trump had repeatedly come into contact with people who tested positive for the coronavirus. 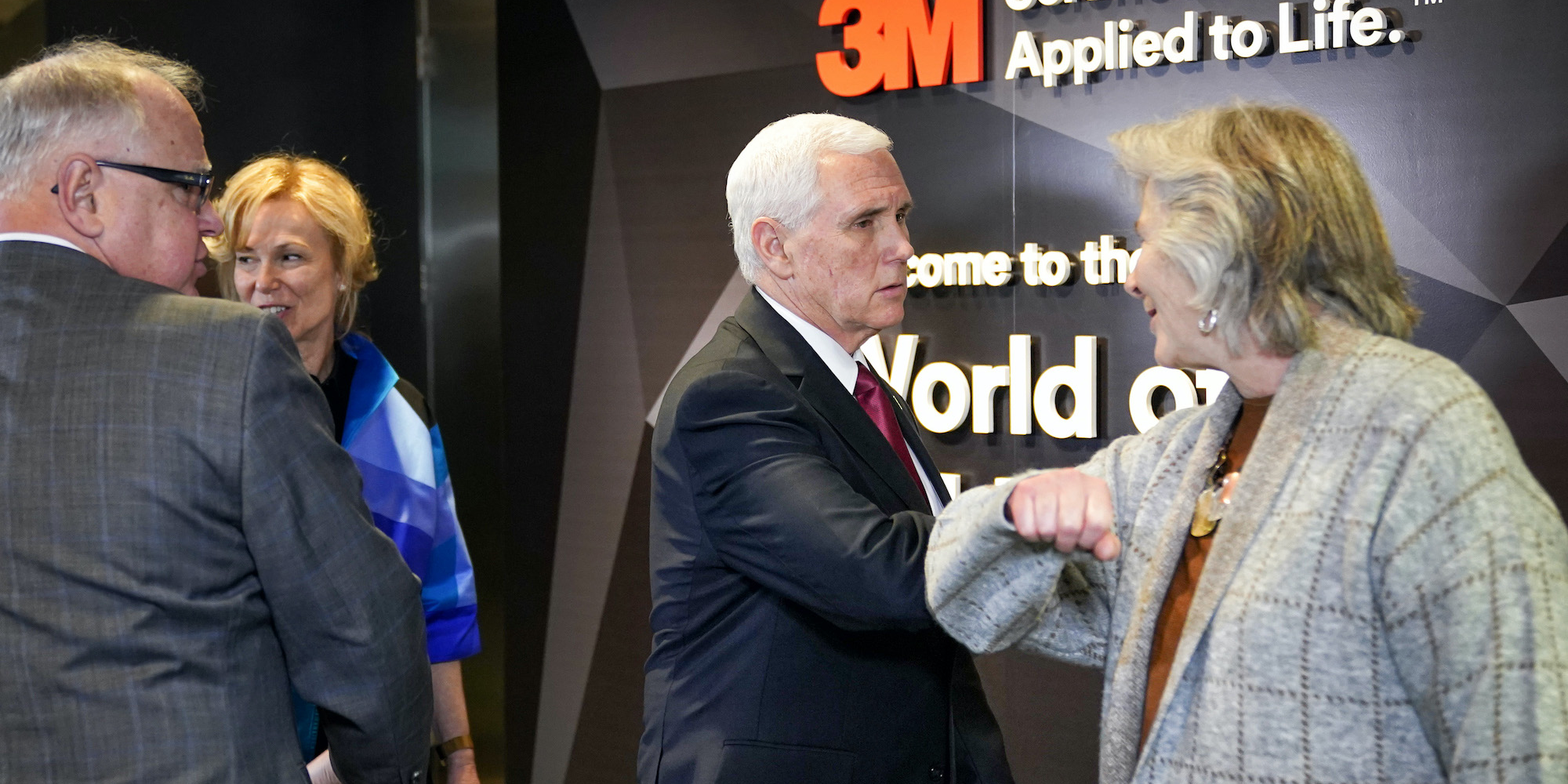 Glen Stubbe/Star Tribune via Getty ImageUS Vice President Mike Pence has taken to bumping elbows as opposed to shaking hands to try to curb the spread of the coronavirus.

In April, Business Insider spoke to experts about what happens if a world leader gets the virus

Experts say countries likely have contingency plans for when a leader catches a serious illness like COVID-19. Ann Keller, an associate professor of health politics and policy at the University of California at Berkeley, said that in a democracy there is usually a chain of command if a leader becomes incapacitated because of an illness.

“In stable democracies, if a head of state dies in office, there are clear patterns of transition so that there is no vacuum of leadership at the top,” she told Business Insider.

In the US, for example, Pence is second in the chain of command after Trump, followed by House Speaker Nancy Pelosi. In Canada, Deputy Prime Minister Chrystia Freeland would temporarily take over Trudeau’s responsibilities if he were to become ill. Other pluralist democracies may choose another elected official to lead.

In the UK, foreign secretary Dominic Raab assumed duties while Johnson was in the hospital. Had Johnson become too ill to serve as prime minister, no immediate election would be called, though the opposition party could eventually pressure parliament into having one.

Still, some experts said that even if a chain of command were laid out, the unique nature of the new coronavirus might change how responsibilities are carried out.

“Often there’s something on paper, but the implementation is up to people around the leader making difficult and sensitive judgments that could easily backfire,” Eugene Bardach, a professor emeritus at the Goldman School of Public Policy at Berkeley, told Business Insider. “That is, providing the leader is merely incapacitated and doesn’t drop dead, in which case the needed actions get triggered quickly if the death becomes known.”

The chain of command is less transparent in nondemocratic societies, making it difficult to predict what would happen if a leader elsewhere in the world were to come down with the disease.

“In autocracies, a death signals a coup or civil war,” Bardach said. 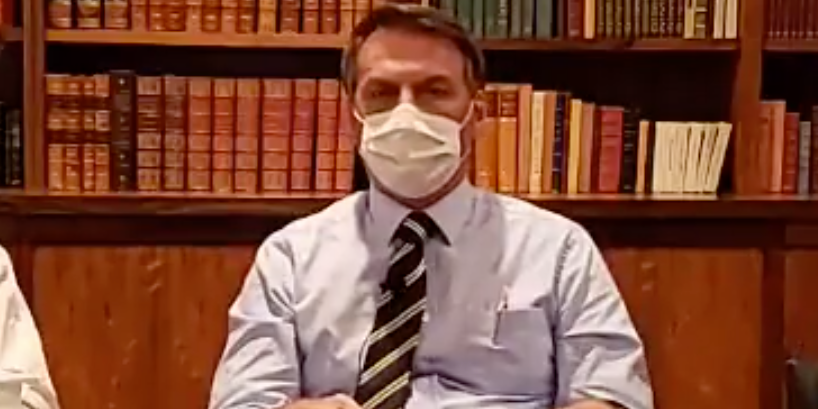 Screenshot/FacebookBrazilian President Jair Bolsonaro has been tested for the coronavirus.

World leaders have gotten sick in office before

Several world leaders have gotten sick while in power. Four US presidents have also died from illness while in office.

“It’s not that unusual that world leaders get sick (or even die) in office,” Sue Horton, a research chair and professor of health economics at the University of Waterloo in Ontario, told Business Insider.

Keller said that “there are a lot of examples of heads of state needing medical care, getting it, sharing that information, and continuing on with their elected roles.”

In 1955, US President Dwight Eisenhower suffered a major heart attack while in office and required extensive hospitalisation. And French President FranÃ§ois Mitterrand had prostate cancer when he left office in 1995.

Several members of Iran’s Parliament, including the country’s health minister, have been infected with COVID-19.

Keller said that while we have seen leaders battle serious illnesses in the past, the world has not been faced with the prospect of heads of state being affected by a pandemic.

“What I think might be different in this case is that in most cases where a head of state has been sick, they were not also in the middle of trying to lead their country through a crisis,” Keller said. “That is an added complicating factor.”

Some leaders in the past have also tried to downplay the severity of their sickness to maintain public trust. President John F. Kennedy had an autoimmune condition called Addison’s disease that he hid from the American public while in office.

“Leadership benefits from its own credibility and doesn’t want to lose it,” Bardach said.

That could become especially relevant with a major election looming just a month away. 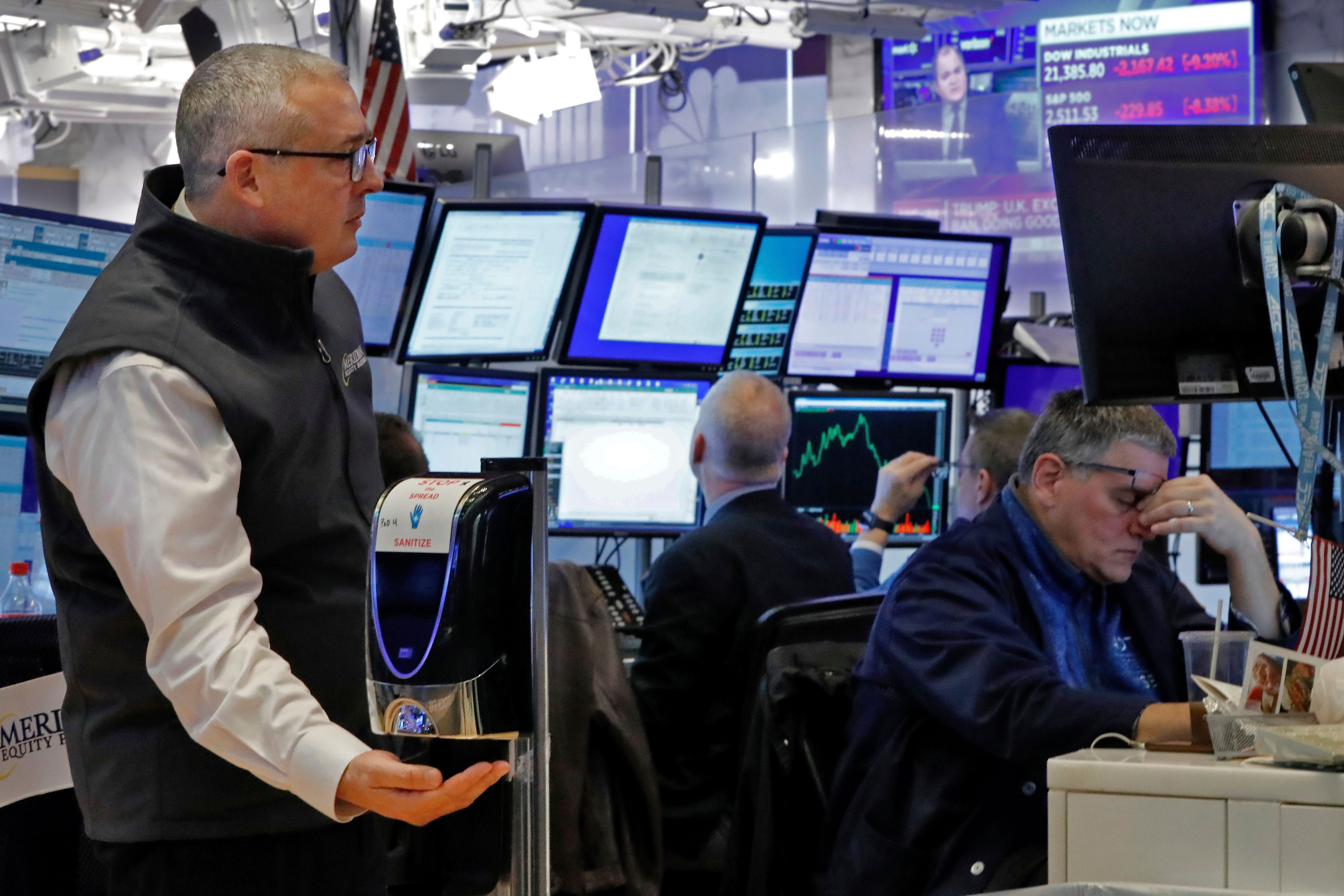 Associated PressA trader uses a hand-sanitizer dispenser on the floor of the New York Stock Exchange on Thursday.

There could be major economic fallout from the coronavirus outbreak as it spreads. Modelling from Australian National University from last month predicted at least a $US2.4 trillion hit to global gross domestic product. In the worst case, the global GDP loss could be as high as $US9 trillion.

Global stocks have seen a series of erratic raises and dips as the virus continues to impact policy and industries around the world.

“Markets don’t like uncertainty,” Keller said. “So if a head of state is sick and not able to perform her or his duties, that could create a lot of uncertainty.”

Horton agreed that instability could create uncertainty in the global markets but said she doubted it would have lasting effects.

“There is short-term anxiety about any such [leadership] change, but it has happened often enough that I don’t think it would have that lasting of an impact,” Horton said.

The experts also said the social response to a world leader’s illness could vary.

Bardach told Business Insider in April that the fact that the US has an election coming up could affect the White House’s transparency about illness among its top ranks.

“The stakes are very high because it’s an election season,” Bardach said.

Keller said there would more likely be a mixed response among Americans.

“I tend to think that there is no single public response,” Keller said. “If a head of state dies, that can create what political scientists call ‘rally around the flag’ responses.”

She said it was less clear what would happen if a world leader’s illness were to be announced via the media.

“That news could undermine morale for the public,” Keller said. “Or it could bring home just how serious this pandemic is for members of the public who had been trying to minimise it.

“Along those lines, if a head of state got sick and recovered, that could help the public feel less fear around what might happen,” Keller said.

“Of course,” she added, “an infected head of state who did not recover could produce the opposite public response.”