Dozens of ex-employees say 'The Ellen DeGeneres Show' was rife with sexual misconduct, according to report 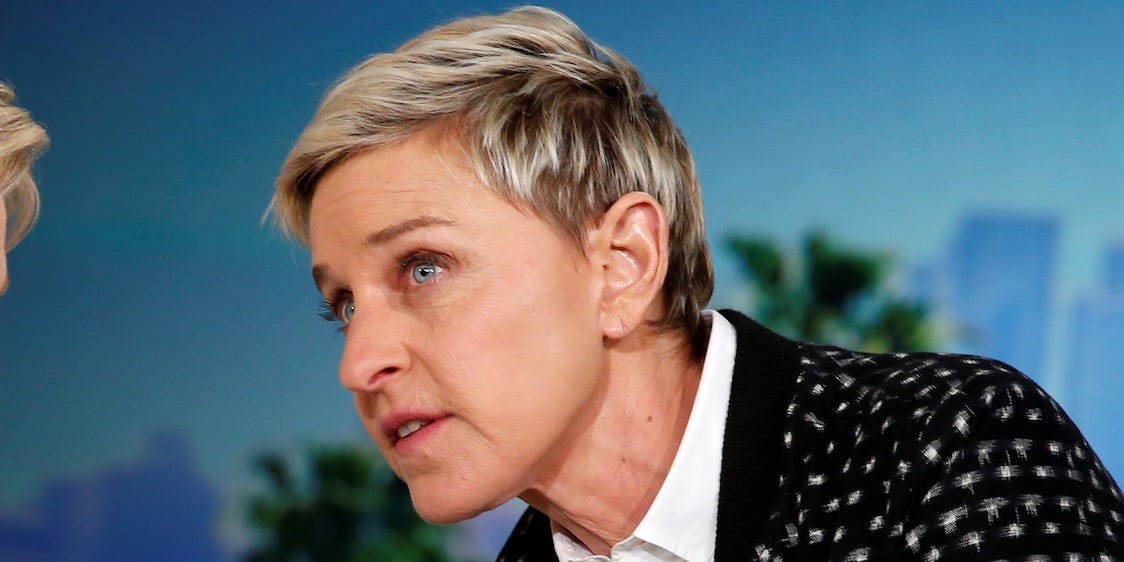 Numerous ex-employees on “The Ellen DeGeneres Show” have said that sexual harassment and misconduct ran rampant while they worked there, according to a BuzzFeed News report.

An atmosphere of intimidation underscored a workplace where senior producers inappropriately touched and harassed staff on the show, according to the allegations in the report.

The company declined to comment when Insider asked about the newest allegations, but told BuzzFeed News on Thursday that it “hoped to determine the validity and extent of publicly reported allegations and to understand the full breadth of the show’s day-to-day culture.”

After the allegations against DeGeneres emerged, she wrote a letter apologizing to those who had not been treated with respect and expressing her disappointment that staff did not feel happy on set. The full letter, which was obtained by The Hollywood Reporter, can be read here.

However, the 36 former staff members told BuzzFeed News that the problems extended beyond DeGeneres herself. They alleged multiple counts of sexual harassment and intimidation from three executive producers on the show.

According to several of the ex-employees Buzzfeed News spoke to, Leman made a habit of making sexually suggestive comments in the office, mainly to lower-level employees. He would, they said, ask them if they are a “top or a bottom” or point at men’s crotches, although it would be “masked in sarcasm,” one former employee said.

On one occasion, one ex-employee said they saw Leman grab a production assistant’s penis.

One told the outlet: “He’d probably do it in front of 10 people and they’d laugh because ‘it’s just Kevin being Kevin,’ but if you’re in a position of power at a company, you don’t just get to touch me like that.”

When approached with these allegations, Leman told Insider that the piece was “filled with false claims that misrepresent me, my actions and all that I stand for.” He denied “any kind of sexual impropriety,” and said:

“I started at the ‘Ellen Show’ as a PA more than 17 years ago and have devoted my career to work my way to the position I now hold. While my job as head writer is to come up with jokes – and, during that process, we can occasionally push the envelope – I’m horrified that some of my attempts at humour may have caused offence.”

Leman added that he had always aimed to treat staff kindly, inclusively and respectfully, and said that to his knowledge he had never had an HR complaint.

“I am devastated beyond belief that this kind of malicious and misleading article could be published,” he said.

One former employee said that Jonathan Norman, co-executive producer and music producer on the show, had offered him work-related treats such as concert tickets, before one night trying to perform oral sex on him, the report said.

BuzzFeed News said that three former colleagues corroborated he had told them about the incident at the time, and that they had discussed it since.

Norman denies the allegation, telling Insider that he has never had a complaint made about him. He accused BuzzFeed News of not properly vetting its story.

“I have never done anything to harm another staff member. Ever,” he said. “The person I believe you are referring to has ulterior motives for bringing down the show and has been acting with malice towards the show.”

“I took the employee to one concert, over seven years ago, along with two other members of my staff,” he said, adding that he was never alone with the staff member and that witnesses and his social media posts attest to that.

Regarding work gifts, he said: “I routinely wind up with extra concert tickets or music swag that I always offer to junior members of the staff.”

“This accusation simply never happened, and it will be proven,” he said. (Norman’s full statement can be read below.)

Five female former employees told BuzzFeed News that another executive producer, Ed Glavin, touched them in a way that they were not comfortable with. Many others added that he had a “handsy” reputation.

One former employee, who said Glavin regularly touched her in the control room, said “You could definitely see the creep factor and the creepy touching.” She said people kept quiet out of a “culture of fear.”

Staff were also uncomfortable with Glavin’s use of the shower adjacent to his office, the report said.

“You’d be going into his office for an important meeting and the shower door is open and you’re like, that’s a little weird,” one former employee said. “The shower is right when you walk in on the right. Before you even see his desk, you see his shower.”

Another said they were touched inappropriately in the control room in front of other staff members. It was, one said, “the nicest experience you had all day, as messed up as that sounds,” because it would be a relief from the “abuse” she said she otherwise received.

An atmosphere of intimidation

“The Ellen DeGeneres Show” has already been described by former employees as a tense place to work, where guests and collaborators would be told not to talk to or look at the star of the show, as Insider’s Libby Torres reported.

DeGeneres’ reported isolation from the rest of the crew may insulate her from knowing about any wrongdoing, some former workers said.

The dozens of former employees who spoke to BuzzFeed News universally said Glavin led through fear. One said Glavin upended a table when he said he was leaving his job.

Glavin did not respond to BuzzfFed News for comment on the report.

Warner Bros told BuzzFeed News on Thursday that it was looking into “publicly reported allegations,” although it did not specify which.

The company said the show has always strived to be “a place that brings positivity to the world.”

“And though not all of the allegations were corroborated, we are disappointed that the primary findings of the investigation indicated some deficiencies related to the show’s day-to-day management,” the statement added.

The company said it was looking at “several” staffing changes and that it was taking steps to address the issues raised.

Insider has approached Glavin for additional comment, but did not immediately receive a reply.

“I am 100% categorically denying these allegations. I have never had a single complaint of any misconduct against me in my career. Period. I have never “groomed” anyone.

“I have confirmed that Buzzfeed never even spoke with the employee in question. He confirms that the reporter did not do her job to even fact check the story. It is gossip and slanderous, all coming from former employees maliciously gossiping about the show and the staff.

“I took the employee to one concert, over seven years ago, along with two other members of my staff – my female assistant, and another male staff member, which I documented on my social media pages. At no point was I ever alone with the staff member, and I have witnesses who can prove that.

“If you publish that false claim, I will sue you for slander. That is defamatory and will damage my career. I am a private citizen.

“I understand that you are doing an investigation on the show’s EP’s and the work environment, but I am the Music Producer at the show and have taken dozens of staff members with me to concerts. That’s the perk of my job.

“And in terms of the alleged “gifts”, I routinely wind up with extra concert tickets or music swag that I always offer to junior members of the staff. We are a show that loves music. There is no favoritism involved. I have never done anything to harm another staff member. Ever.

“Since this sensational tabloid accusation broke last night, I have been inundated by publicists, managers, agents, who I have worked with for over 20 years who can all attest to my character, and how an accusation like this, could and would never happen with me.

“I am aware of the campaign in the press going on about our show, but I will not allow my name to be slandered, or have my sexuality brought into question by former employees maliciously gossiping about the show and the staff. I am married to my wife of 18 years, with three children. This accusation simply never happened, and it will be proven.”

Read the full report at Buzzfeed