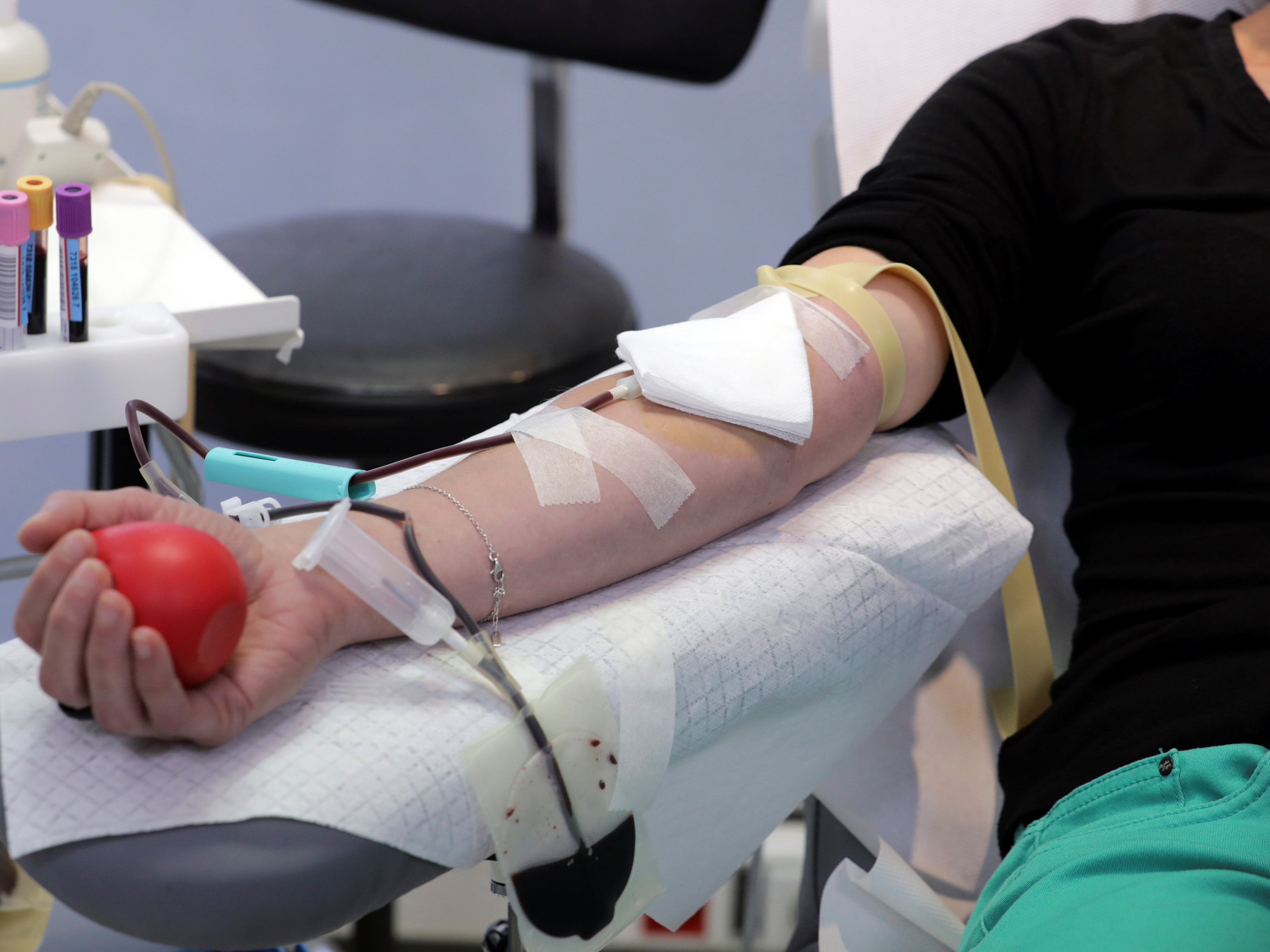 REUTERS/Eric GaillardIn the US, one of the requirements potential donors must meet is weighing over 110 pounds.

If you meet certain eligibility criteria and want to make a difference in your community, blood donation is a great way to do so, according to the World Health Organisation.

Donating whole blood (blood that hasn’t had any components like plasma or platelets removed) can save up to three lives per donation, Alexander Sigua of blood service provider Vitalant told Insider. And new donations are always needed seeing as an individual in the US needs a blood transfusion every two seconds on average, according to the American Red Cross.

Donating blood might seem intimidating or confusing at first, but learning more about the process could help ease some of your worries.

Here are some things you should know before donating blood.

In the US, there are minimum age and weight requirements you must meet in order to potentially donate blood

Jessa Merrill, a spokesperson for the American Red Cross, told Insider that eligible donors must be at least 17 years of age to donate blood, but you can never be too old to donate provided that you meet all other eligibility criteria. In states with certain laws, 16-year-olds can donate if they have consent from a parent or guardian.

According to the American Red Cross, eligible donors must also weigh at least 110 pounds. Notably, there are additional height and weight requirements for donors under the age of 18.

In addition, a valid, government-issued form of identification is required for donors of all ages. REUTERS/THOMAS MUKOYAYou’ll have to answer a few questions before blood centre staffers can determine if you may be an eligible donor.

No matter who you are or how frequently you donate, you can expect to answer a list of blood safety-related questions established by the US Food and Drug Administration each time you try to donate blood.

And, as of 2018, you’ll also likely need to answer an additional series of questions regarding if you have recently travelled to areas affected by the Zika virus, as per the Centres for Disease Control.

In addition, your hemoglobin will also be tested – usually via a small, sterile finger prick. According to BioBridge Global, this helps the centres to check your iron levels since iron plays a crucial role in helping your body replenish your red blood cells post-donation.

Like a visit to the doctor’s office, your weight and blood pressure at the time of your donation will also be recorded. Additionally, your blood will be tested by the centre after you donate and you’ll be informed if it is found ineligible for any reason.

As Merrill told Insider, some of the many reasons an individual can be unable to donate include if they have certain acute illnesses such as the cold or flu, have recently travelled to certain countries outside of the US, or are taking certain medications such as antibiotics.

And if you’re not feeling well or are worried you may be sick, it’s best to postpone your donation appointment.

Ineligibility may be temporary or permanent depending on your individual circumstances and a blood centre staffer will likely be able to answer any specific questions you may have.

There are a lot of myths about who can and cannot give blood, but having tattoos doesn’t necessarily prohibit you from donating

Merrill said one of the most common misconceptions regarding blood donation is that individuals with tattoos cannot donate. She said this is not always the case.

“In most states, individuals may be eligible to give blood immediately after getting a tattoo as long as it was applied by a state-regulated entity using sterile needles and ink that is not reused,” Merrill told Insider. This requirement is related to concerns about the blood-borne hepatitis C infection, which can potentially be spread through the use of unsterile tattoo needles that have been in contact with infected blood.

Currently, according to the American Red Cross, the only states that don’t regulate tattoo facilities are the District of Columbia, Georgia, Idaho, Maryland, Massachusetts, Nevada, New Hampshire, New York, Pennsylvania, Utah, and Wyoming.

You don’t need to know your blood type to donate, but you will typically find out what it is when you do 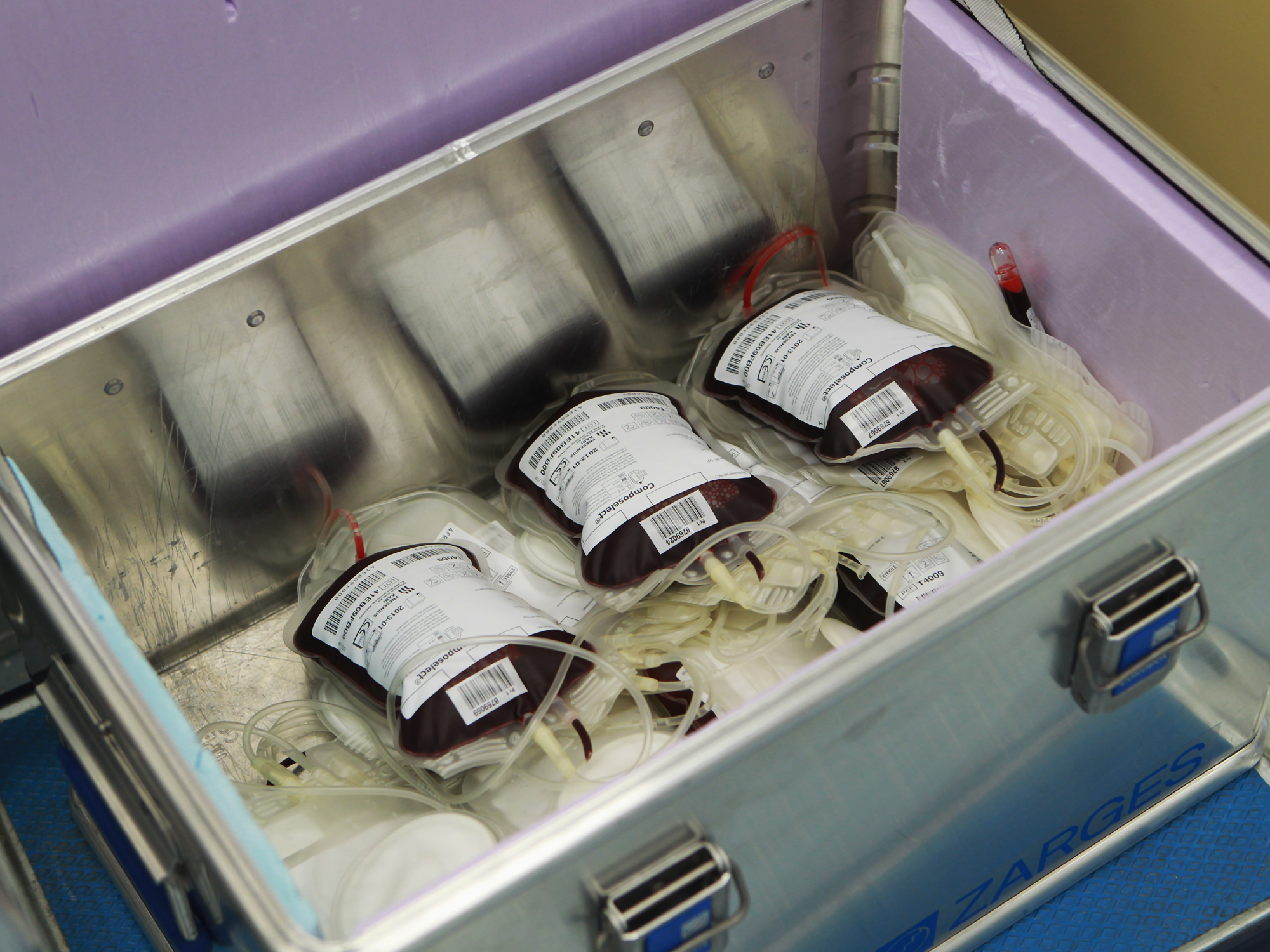 Getty Images/Joern PollexO- is the blood type of those considered to be ‘Universal Donors.’

Merrill told Insider that in a national survey conducted on behalf of the American Red Cross in April 2018, over 53% of respondents believed that they needed to know their blood type in order to donate – but this widespread myth isn’t true.

If you don’t know your blood type at the start of the process, you’ll soon learn all about it because phlebotomists (those trained to collect blood for testing or donations) and other blood centre staffers will typically tell you specific traits of your blood type and how you can best help other people with your donation.

Some blood types are routinely in higher demand than others, for example, O- is in high demand because it is typically in short supply at hospitals and it is oftentimes used for emergency transfusions, according to the American Red Cross.

Before giving a donation, Merrill said you should plan to get a good night’s rest, hydrate, and eat a healthy meal

According to Merrill, your pre-donation meal should include foods rich in iron and vitamin C, which includes foods such as red meat, fish, poultry, beans, spinach, iron-fortified cereals, or raisins.

According to the National Institutes of Health, vitamin C can help your body absorb iron and iron will help your body to replenish your red blood cells after you donate.

Merrill also said she suggests that you wear a T-shirt or something with sleeves that are easy to roll up so that donating blood is as easy and comfortable as possible.

There are a few different ways you can donate blood, and some people may be encouraged to donate individual blood components instead of whole blood 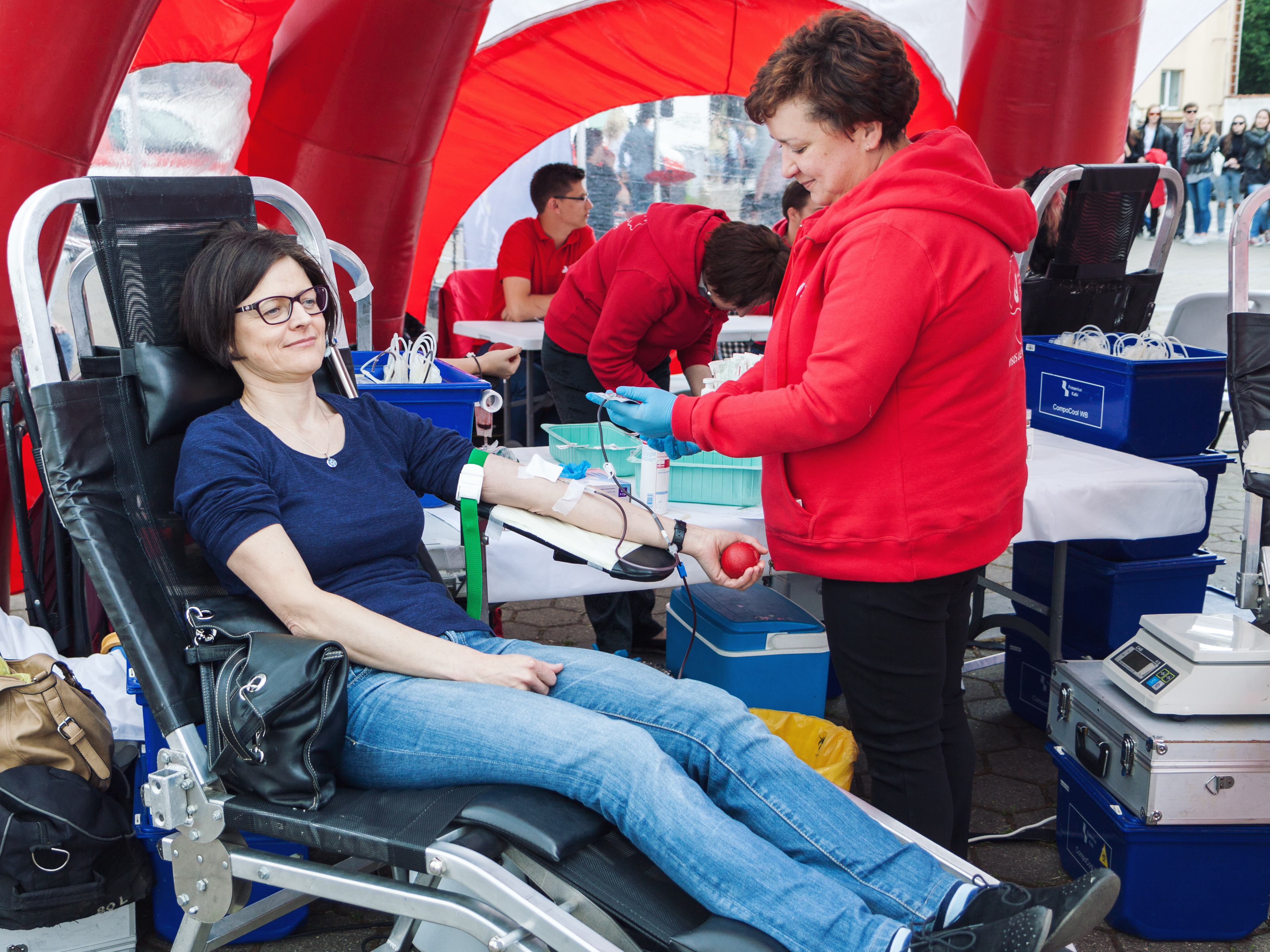 iStockThere are oftentimes pop-up blood drives around the US.

Merrill told Insider that individuals with blood types A+, A-, B+, O+, AB+, and AB- are encouraged to consider donating platelets – the blood component which helps your body form clots to stop bleeding.

Cancer patients and those facing severe and life-threatening illnesses and injuries commonly rely on platelet donations. One of the reasons these donations are oftentimes needed is because platelets have a relatively short shelf life of just five to seven days.

You can also complete dedicated donations of plasma and red blood cells. To do so, you’ll need to speak to your local blood centre about specific donor guidelines and how they apply to you. According to Sigua, red blood cells typically have a shelf life of about 42 days whereas blood plasma may be frozen for up to one year.

Donations of all of these individual blood components is done by a process called apheresis, which Sigua told Insider is a specialised process that draws your blood out, separates the component(s) to be collected, and then returns the remaining components safely back into your body.

After your donation, you’ll typically spend some time in a recovery area

Since everyone can react differently to the donation process, the blood centre or mobile drive will typically take you to a post-donation recovery area where you can sit down, drink beverages, and eat a snack.

This brief rest period is especially important for anyone who feels a little bit dizzy or light-headed post-donation.

This rest period is standard even if you become a frequent donor because sometimes your body can react differently to the process.

In the hours after donating, you’ll typically be encouraged to take it easy and avoid strenuous activity for the rest of the day. Post-donation, the staffers at the centre will likely also encourage you to eat a filling meal, drink plenty of fluids, and get plenty of rest.

The Red Cross is one of the most well-known organisations associated with blood drives in the US – but it’s important to note that there are also many smaller, regional blood centres and organisations around the country.

Many different websites allow you to find reputable and accredited blood banks and donation centres that are close to you.

For example, the America’s Blood Centres website allows you to input your zip code to help you find your nearest donation centre. And AABB (formerly known as the American Association of Blood Banks) has a blood bank locator on their website that can also help you to find a nearby donation centre.

Many community organisations, workplaces, and religious organisations around the US frequently sponsor mobile blood drives, so keep an eye out for those opportunities as well.

Ultimately, if you are not eligible to donate blood you can still volunteer with blood donation organisations

If you’re not eligible to donate blood but are passionate about the cause, many organisations around the US have shared a variety of ways you can still be involved.

For example, the Armed Services Blood Program encourages those not eligible to donate to organise blood drives, encourage others to donate, or volunteer at local blood drives. And, according to The Red Cross website, those unable to donate can still help by volunteering to work at blood drives or by making a financial donation.

I lost more than 120 pounds on the keto diet. Here’s why I’m quitting it.

7 things you should never do right after having sex

Doctors and nurses rate 10 popular medical shows based on accuracy