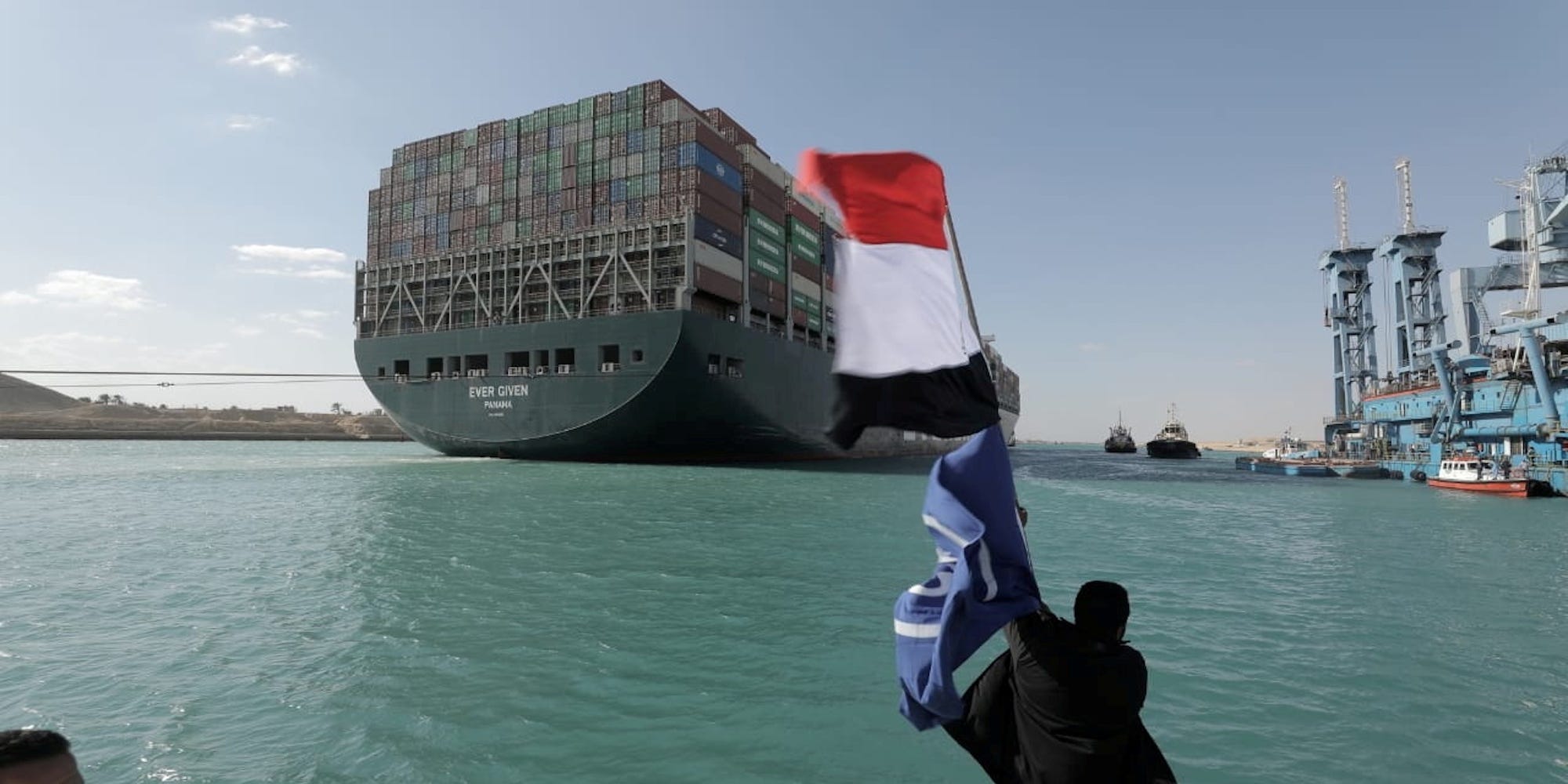 Suez Canal Authority via ReutersA man waves an Egyptian flag in front of the Ever Given the day it was fully re-floated in the Suez Canal, Egypt on March 29, 2021.

The owner of the Ever Given has launched a legal effort to cap some claims against the ship at $115 million, a fraction of what Egypt is pursuing in damages after the ship blocked the Suez Canal.

The company is facing a claim of $916 million from Egyptian authorities, as well as further claims from other companies whose ships were delayed by the Ever Given’s six-day grounding in March.

A month has passed since the ship was freed from where it had been lodged across the canal – but the ship never got far.

Soon after it was dislodged, the Suez Canal Authority impounded the ship and its cargo, holding them in a body of water along the canal called the Great Bitter Lake.

On April 8 law the firm HFW, acting for the ship’s owner Shoei Kisen Kaisha Ltd, set up an entity known as a limitation fund. Such funds are part of maritime law, governed by the International Convention on Limitation of Liability for Maritime Claims 1976, known as LLMC 76.

A spokesperson for HFW confirmed the move but declined to comment.

The limitation fund is a pot from which claimants can take until it is exhausted. It does not apply to salvage claims – ie claims related to the ship itself – or to general-average claims, which shares losses between the ship’s owner and its cargo customers. Shoei Kisen Kaisha Ltd declared general average in mid-April.

Experts told the famed shipping journal Lloyd’s List Intelligence that the issue at hand is which of Egypt’s massive claims are actually limitable under the fund.

The fund has been maxed out at $115 million, which – if applicable in the SCA’s case – would barely begin to cover Egypt’s demands, let alone any further claimants.

The $916 million SCA demands include $300 million for “loss of reputation” and a $300 million salvage bonus. Much of the definitions would be down to local law, experts told the outlet.

Nonetheless even a lawyer acting for one of the additional claimants told Lloyd’s List that the recourse to LLMC 76 is an “entirely reasonable” move.

“This is what the convention allows owners to do, so shipowners do not face unlimited liability,” the unnamed lawyer said. “That’s the whole point of it … It’s absolutely what everybody would do in their shoes.”

The UK Club, the Ever Given’s insurer, earlier said that the SCA claim is overblown. “The SCA has not provided a detailed justification for this extraordinarily large claim,” it said in a mid-April release.