Europe's economy has 'likely bottomed out' and is starting to bounce back, according to a set of closely-watched business surveys Economic activity in Europe has significantly improved in May as lockdown restrictions are slowly relaxed across the region, with analysts saying the continent’s “downturn likely bottomed out”

The IHS Markit Eurozone Composite Purchasing Managers Index posted a three-month high reading of 30.5 in May, up from 13.6 in April.

The composite PMI is a measure used to track the economic directions of business trends in an economy. A reading of 50 would mean a neutral or stabilised level of growth, above 50 exhibits expansion, and below 50 indicates stagnation.

During economic downturns, readings as low as 45 are ordinarily expected, while during expansion PMIs linger in the mid-50s range. April’s fall to 13.6 was an unprecedented low for the eurozone. 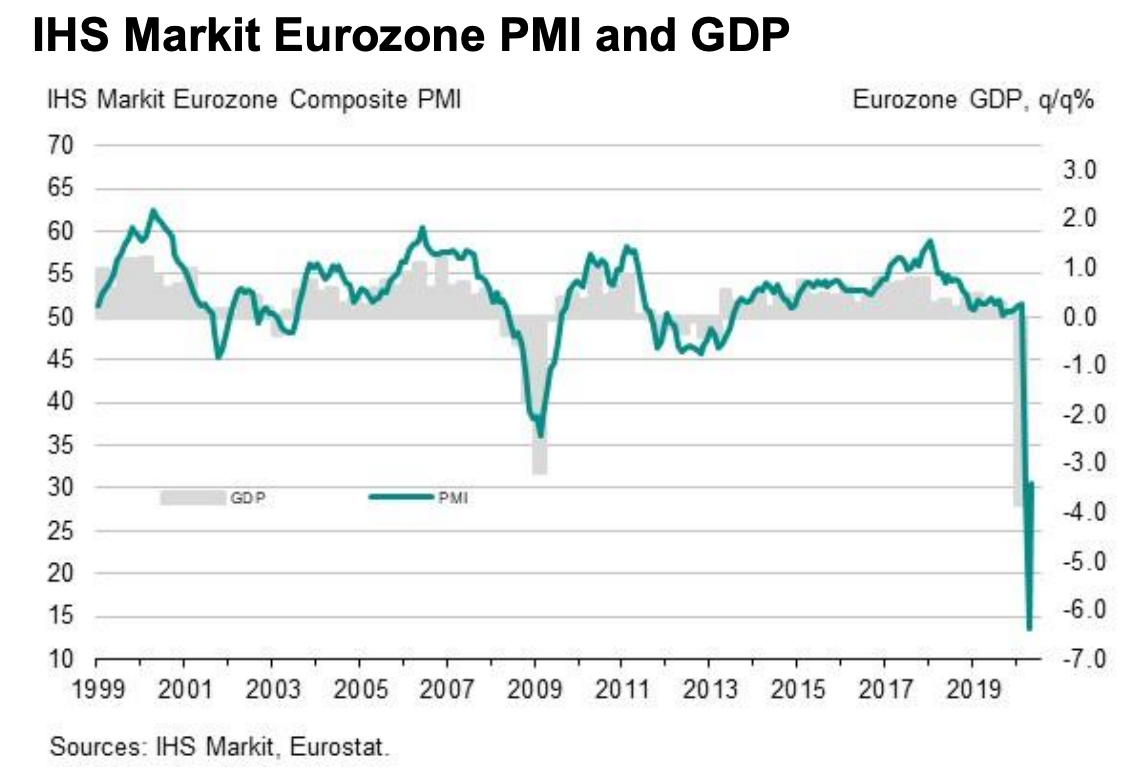 IHS MarkitIHS Markit’s Eurozone Composite Index posted an improved reading of 30.5 in May.

The eurozone’s improved index came despite its economy remaining stuck in the deepest downturn arising out of measures taken to control the Covid-19 outbreak.

“The eurozone saw a further collapse of business activity in May but the survey data at least brought reassuring signs that the downturn likely bottomed out in April,” Chris Williamson, chief economist at IHS Markit, said in a statement.

IHS Markit’s UK Composite Index rose to a 2-month high of 28.9, up from 18.8 in April when the economy underwent steep declines in business activity surpassing levels seen during the global financial crisis.

“Although the pace of decline has eased since April’s record collapse, May saw the second largest monthly falls in output and jobs seen over the survey’s 22-year history, the rates of decline continuing to far exceed anything seen previously,” Williamson said.

“If this intensity of job cuts continues, purse strings will be drawn tightly shut and spending severely curtailed, putting further pressure on the UK economy and ensuring any recovery is many years into the future,” he said in a statement.

The composite index takes all sectors of the economy into account.

Here’s a breakdown of the composite index for the Eurozone and the UK:

Consensus projections for the eurozone were 25 for services and 27 for manufacturing, while for the UK it stood at 24 and 37.2, respectively.


John Fedro quit his job and got involved in real estate with barely any money. He breaks down his low-cost approach to mobile-home investing, which allows him to live comfortably on passive income