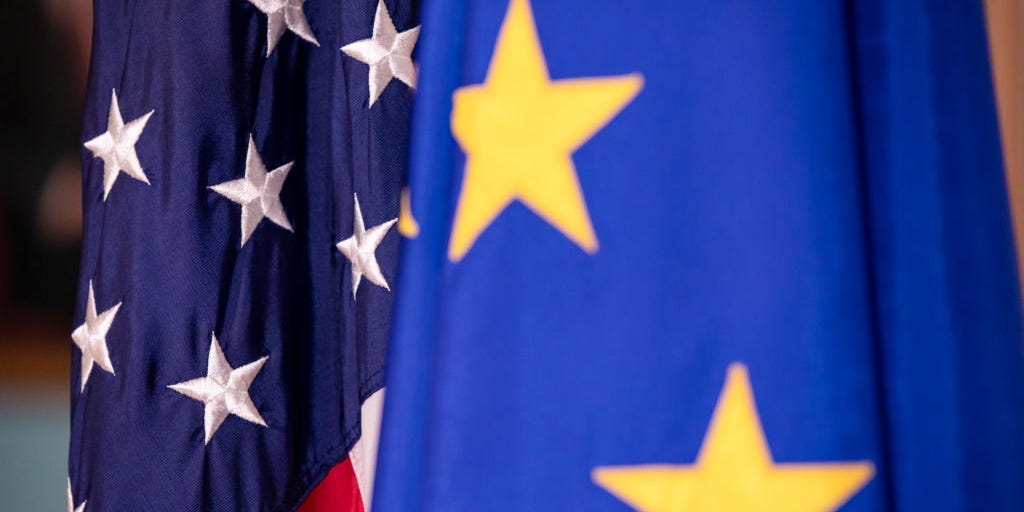 Samuel Corum/Getty ImagesUS and European Union flags on display before a meeting.

The European Union will impose tariffs on $US4 billion worth of US goods, CNN reported.

Last month, the World Trade Organisation ruled that the EU could impose the tariffs on the US for subsidies the US granted to the Chicago-based aircraft manufacturer Boeing.

The move is largely reciprocal. The WTO in October 2019 allowed the US to impose tariffs on $US7.5 billion worth of EU goods and supplies as a consequence of the bloc’s financial assistance to the Netherlands-based Airbus, Boeing’s chief rival.

“We have made clear at every stage that we want to settle this long-running issue,” the executive vice president of the European Commission, Valdis Dombrovskis, told journalists at a press conference. “Regrettably, due to lack of progress with the US, we had no other choice but to impose these countermeasures,” he said.

Despite the EU plan to move forward with these tariffs, it is hoping for a fresh start when President-elect Joe Biden takes office in January, CNN reported.

Last month, following the WTO ruling, President Donald Trump said the US would retaliate if the EU went ahead with the tariffs.

“If they strike back, then we’ll strike much harder than they will strike. They don’t want to do anything, I can tell you that,” Trump told reporters before boarding the Marine One helicopter ahead of campaign rallies.

While trade tensions between the US and other countries have escalated under Trump, it is expected that the Biden administration will try to calm the waters, the chief Berenberg economist Holger Schmieding told CNN.

“We would not be surprised if the US and the EU defuse or even settle [the Airbus-Boeing] dispute shortly after the Biden administration takes office on January 20, 2021,” Schmieding said.