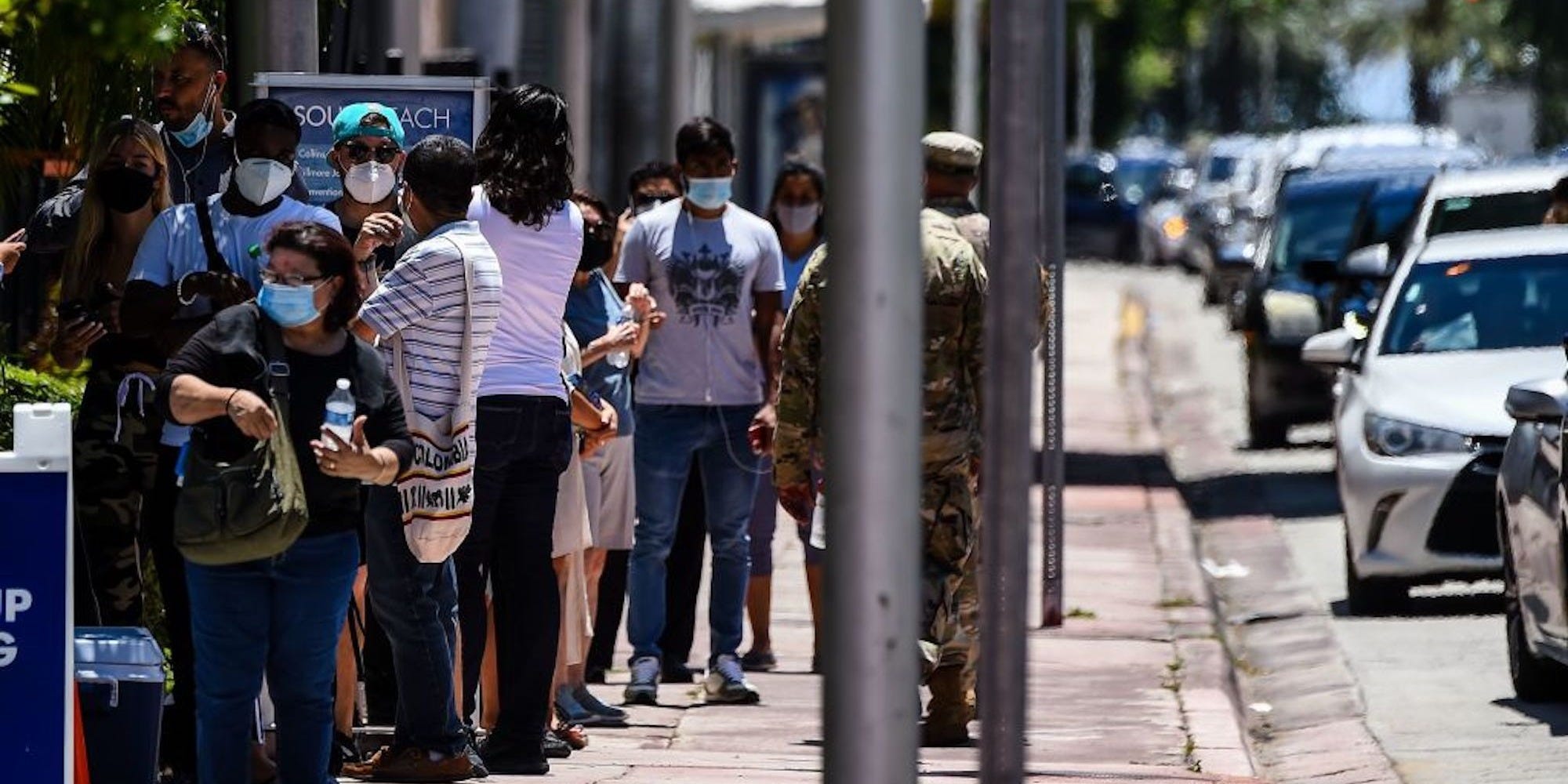 CHANDAN KHANNA/AFP via Getty ImagesPeople wait for their testing at a ‘walk-in’ and ‘drive-through’ coronavirus testing site in Miami Beach, Florida on June 24, 2020.

Experts in Europe are looking on in horror as the US coronavirus outbreak continues to worsen, in contrast to declines in their own countries.

As the pandemic first began to sweep across the world in the first few months of the year, many nations in Europe were caught off-guard, much as the US was. Infection rates climbed steeply in both continents.

But then their paths diverged. Infections rates across most of Europe are in steady decline after months of stringent lockdown measures. France, Spain, and Italy had particularly severe outbreaks, but have since started to recover.

Meanwhile, infections in the US are again sharply increasing.

The US is the country most severely hit by the pandemic, with a seven day average of 23,000 new cases recorded daily. In the 27 states of the European Union – which has a larger population than the US – an average of 4,000 new cases are being recorded.

The biggest story of coronavirus response right now is US vs EU. Nearly identical case rate going up (US 10 days later).

And then Europe starts managing the crisis. While much of the US doesn’t. pic.twitter.com/sCMRBSjZFq

Experts believe that a number of factors are behind the US’ failings.

US response ‘too little too late’

Denmark’s coronavirus strategy is one of Europe’s success stories. The Nordic country was the second in Europe to impose lockdown. It launched an effective “test and trace” system and has seen 603 coronavirus related deaths, a relatively low number.

Christian Wejse, a professor at Aarhus University, is one of the country’s leading epidemiologists. He was critical of the US response, which he characterised as slow and piecemeal.

“The lockdown in the US was too little and too late, so the effect was more limited and did not cause a rapid decline in the epidemic after two weeks as we observed in most European countries,” he said.

He pointed to a study by scientists at Columbia University, who estimated that 36,000 US deaths could have avoided if social distancing had been introduced only a week earlier.

Wejse said: “In the beginning of an epidemic, where there is a doubling time of cases and deaths at 2-3 days, you reach enormous numbers in those weeks [when there is] little attempt to control the epidemic. This has caused large unnecessary death tolls.”

He said that not only was the US slow to impose restrictions, but they were lifted too early as infection rates remained high.

“When you then open up at a time where you have large numbers of infectious individuals in society, you are going to get an increase in the epidemic.”

Germany is held up as an international model for its containment of the disease. Like Denmark, Germany reacted swiftly and effectively, introducing lockdown measures and a “track-and-trace” system that rapidly detected and isolated pockets of infection.

Reinhard Busse is head of the Department of Health Care Management at Berlin University, and a consultant for organisations including the European Commission, the World Health Organisation and the German government.

He questioned the Trump administration’s commitment to the lockdown measures he said were required to contain the disease.

“The lockdown, which was never meant seriously by the Trump Administration anyway, was finished much too early,” he wrote in an email to Business Insider.

To lift lockdown, he explained, the rate of new infections has to be going down.

“The number of newly infected has to be so low that your capacities are sufficient to trace contact persons of the newly infected so that they can be quarantined and tested,” he explained. “While there is no magic number, [an infection rate of] 1 per 100,000 population is probably the maximum you can handle: in Germany, this amounts to around 800 new infections per day, in the US to 3000.”

In the US, 40,000 new cases were recorded on Thursday, according to data from Johns Hopkins University, the highest daily tally since the beginning of the pandemic.

He also said that the government should agree on a limit of new cases per day that would necessitate lockdown being reinstalled.

He said that given the high rate of infections in states such as California, Arizona, and Texas, state-wide lockdowns should have been in place in late May or early June.

The coronavirus crisis also emphasises the political gulf between the US and much of Europe, say analysts.

In the US, President Donald Trump has emphasised the necessity of getting the economy moving again amid spiraling job losses. He has ruled out introducing new lockdown measures even as infection rates continue to rise.

“Many Republicans are also following Trump in endorsing a choice unimaginable in Europe: risking death for the Dow,” writes journalist Simon Kuper in The Financial Times.

While in the US, millions have been made jobless by the crisis, in many European countries the initial economic impact of the crisis has been mitigated by government programs to pay the wages of furloughed workers.

In the US, Congress did release $US3 trillion in aid to help businesses. But this has not been linked to keeping employees in work, economists told the Washington Post.

Unlike his counterparts in Europe, where German Chancellor Angela Merkel’s adept explanation of coronavirus transmission rates went viral, Trump has ignored science and pushed unproven treatments, such as the drug hydroxychloroquine.

Wejse said that while public health officials such as Anthony Fauci had provided sound scientific advice in the US, the president didn’t always seem willing to follow it.

“There have been many approaches which have been guided by science, but the delayed testing and lockdown was certainly not,” he said. “The current opening on a rising epidemic curve is most certainly not.”

“Fauci and others have stated the relevant scientific recommendations, but the political will to act on them has lacked, so it is a political failure more than a scientific failure.”

Thomas Gerlinger, a professor of health sciences at the University of Bielefeld in Germany, told The Washington Post that the Trump administration has ignored scientific data.

“Many scientists appeared to have reached an adequate assessment of the situation early on [in the US], but this didn’t translate into a political action plan,” he said.

Busse said that it is essential for governments to be guided by sound scientific advice.

“There is a German saying, ‘the fish always stinks from the head downwards,’ so clearly the heads of Governments are the most important figures,” he said.

“If they are not scientists themselves (as in Germany with a physicist governing the Country and an emergency care doctor as head of the chancellor’s office), they should at least have a feel for scientific thinking and reasoning, and if they do not have that they should at least trust others who have. Unfortunately, in the US none of these conditions applies. It’s sad.”

He said that scientists do get it wrong – such as in Sweden, where the epidemiologist who guided the country’s controversial “herd immunity” strategy recently admitted it caused too many deaths. But to counteract this, he said, in Germany policy is guided not by one expert but a panel of 10, of which he is one of two scientists.

He said that the US could learn from Germany by “taking the disease seriously, putting saving lives first, testing to identify as many as possible infected,” adding that US testing was likely only identifying a small proportion of those infected.

The White House has maintained that the best data guide its approach.

Judd Deere, a White House spokesman, told The New York Times in April that Mr. Trump’s handling of the coronavirus outbreak “has put the full power of the federal government to work to slow the spread, save lives, and place this great country on a data-driven path to opening up again.”

Back in March, as infection rates in several European countries were climbing steeply and America’s remained relatively low,Trump took his European allies by surprise, announcing a ban on Europeans travelling to the US.

On Monday, news outlets reported that the EU was considering lifting many travel restrictions into the bloc on July 1.

But, because of the spread of the virus in the US, American travellers will likely not be among those welcomed back.

Writing in the Guardian, author Francine Prose described the US as a “pariah nation of super spreaders.”

“We’re simply too dangerous – too likely to bring the deadly virus along with the more welcome (and needed) tourist dollars,” she wrote.