'The Ewoks are dead. All of them': How Star Wars got the ultimate fate of the Death Star completely wrong

If you’re reading this, chances are you’ve already watched (or plan to watch) Disney’s “Rogue One: A Star Wars Story,” the first of several standalone “Star Wars” movies that expands upon the main plot of the epic series.

Without spoiling anything beyond the trailers, “Rogue One” picks up at a critical moment: when the Empire has just finished building the Death Star and is flexing its planet-destroying muscles.

But there is something gravely wrong with the moon-size weapon’s ultimate fate in the trilogy’s final film, and physicists want you to know about it.

The Death Star meets its final doom in “Return of the Jedi,” the epic conclusion to the original “Star Wars” saga.

The colossal ship is orbiting the forested Sanctuary moon of the planet Endor and, after it’s blown up, the Rebel Alliance and its hairy Ewok friends party in the trees. Everyone and everything is hunky-dory.

But ask a physicist — or a dozen, as Tech Insider did last year — what happens when you detonate a giant metal sphere above a lush green world. The answer is downright chilling.

“The Ewoks are dead. All of them,” said one researcher and self-professed “Star Wars” fan, who wrote a white paper in 2015 that supported his conclusion.

Each scientist who responded to our emails quibbled over the exact details, yet a strong consensus emerged in support of a popular fan theory: The “Endor Holocaust” is inevitable, and a threat to the plausibility of any future movies (galactic bankruptcy be damned).

The 'Endor Holocaust' fan theory dates back to 1997, when it first appeared on a website called TheForce.net. Curtis Saxton, an astrophysicist and 'Star Wars' super-fan, wrote it as part of a technical series that analyses the movies frame-by-frame with scientific rigour.

Saxon's 10,000-word essay about the Endor holocaust claims that the doom of Endor and the Ewoks who live there 'is an inevitable consequence of observable facts.'

The rebels' attack on the Death Star turns it into fine metallic bits, Saxton argues. The debris then rains down on Endor, burns up into a toxic sooty fallout, and sparks global firestorms.

But many of Saxton's various measurements are open to interpretation, since depictions of the Death Star, Endor, and other details are inconsistent from one scene to the next.

Hoping to settle the matter, we asked 11 physicists the question, 'What would happen to Endor if the Death Star blew up?'

Almost all of them responded right away. Planetary scientist Sarah Stewart was optimistic: 'I think Endor survives. ... After some environmental cleanup (of the fallout), the forest moon would return to its idyllic state,' she told Tech Insider.

Responses after that, however, were grim.

Matija Cuk, who studies orbital dynamics, said the Death Star's reactor blows up the artificial satellite in about 1 second. This would eject huge chunks of debris at 220,000 mph, or six times faster than humanity's speediest spacecraft.

'The energy carried by the debris would not be enough to destroy the moon,' Cuk told Tech Insider, 'but it would heavily erode the side facing the Death Star.'

The high-speed chunks would obliterate '(a)ll ships close to the Death Star, imperial or rebel,' Cuk said. 'This is particularly true for Millennium Falcon and Luke's shuttle' -- both would be goners.

'Since the rebels on the Forest Moon are just underneath (the Death Star) ... I suspect that they would be dead from radiation released by the explosion before the debris even reaches them,' he said.

After the radiation bath, high-speed debris would hit the ground, throwing rocks to the far side of the moon. 'Extinction of (the) Ewoks appears inevitable,' Cuk concluded.

Planetary physicist Erik Asphaug, who studies giant impacts with moons and planets, refused to believe most of the Death Star would vaporise or turn into tiny bits upon exploding.

'Nuclear explosions in rock tend to vaporise the stuff nearby, melt the stuff a bit further away, and then break stuff farther away mechanically. The farther away, the less broken the bits become,' Asphaug told Tech Insider. 'So, I predict there will be huge chunks of the Death Star raining down on the Ewoks that might make their life unpleasant,' he said -- plenty big enough to reach the ground and make craters. Yet Asphaug said the biggest problem for the Ewoks on a dense forest moon might be fire. 'If thousands of wildfires go off at once, even if limited to one half of the planet, much of the surface will be a charred ruin,' he said. 'Their parties and celebrations will quickly change into emergency procedures to survive what could be a horrible nightmare.'

The white paper is based on a detailed, to-scale hologram projected in 'Return of the Jedi.'

From that image, Minton used physics equations to extrapolate diameters, masses, velocities, and orbital paths of Endor and the Death Star. Minton figured out that the Death Star is in a bizarrely stable orbit, since it's too near the moon and moving too slowly.

'So I have to assume that the Death Star is being maintained in its position using something like (anti-gravity) repulsorlifts,' he wrote.

When the rebels and Ewoks destroy the shield generator on Endor -- a device that protected the Death Star -- Minton assumes the repulsorlifts there got destroyed, too.

He also assumes, like Asphaug, that the Death Star is not vaporized and mostly shatters into a field of loose rubble. '(M)ore or less what happens after the destruction is that the entire mass of the Death Star simply falls onto the location of the shield generator,' he said. Minton said the falling rubble field would look something like this animation of a colossal asteroid striking the Earth: 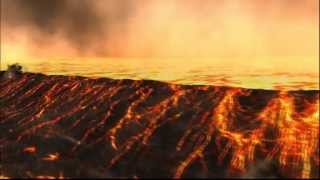 Striking Endor at more than 6,000 mph, Minton said 'a Death Star-mass ball of fragments will leave behind a 700 km diameter crater. This is almost 4 times larger than the Chicxulub crater in Mexico that is associated with the dinosaur extinction.' 'The aftermath of this impact would be to obliterate everything on the surface. No Ewok could withstand an impact of that magnitude.'

'It is likely that the atmosphere would be so heated up ... that every body of water on the entire world would be flash heated to steam, and every forest would ignite into a global firestorm.' In short, not good. At all.

There is one glimmer of hope for the Ewoks and the Rebel Alliance, though.

Another superfan named Gary M. Sarli (who is not a physicist) closely analysed the Death Star's explosion.

Sarli calculated that the blast imploded inward instead of flying outward. Which implies a wormhole formed as the Death Star's reactor blew, rapidly transporting almost all of the debris to another corner of the galaxy -- and away from Endor. If true, the Ewoks survive, Luke and Han Solo escape, the Rebel Alliance lives to fight another day...