The 'war on drugs' may be a bigger problem than the drugs themselves, experts say 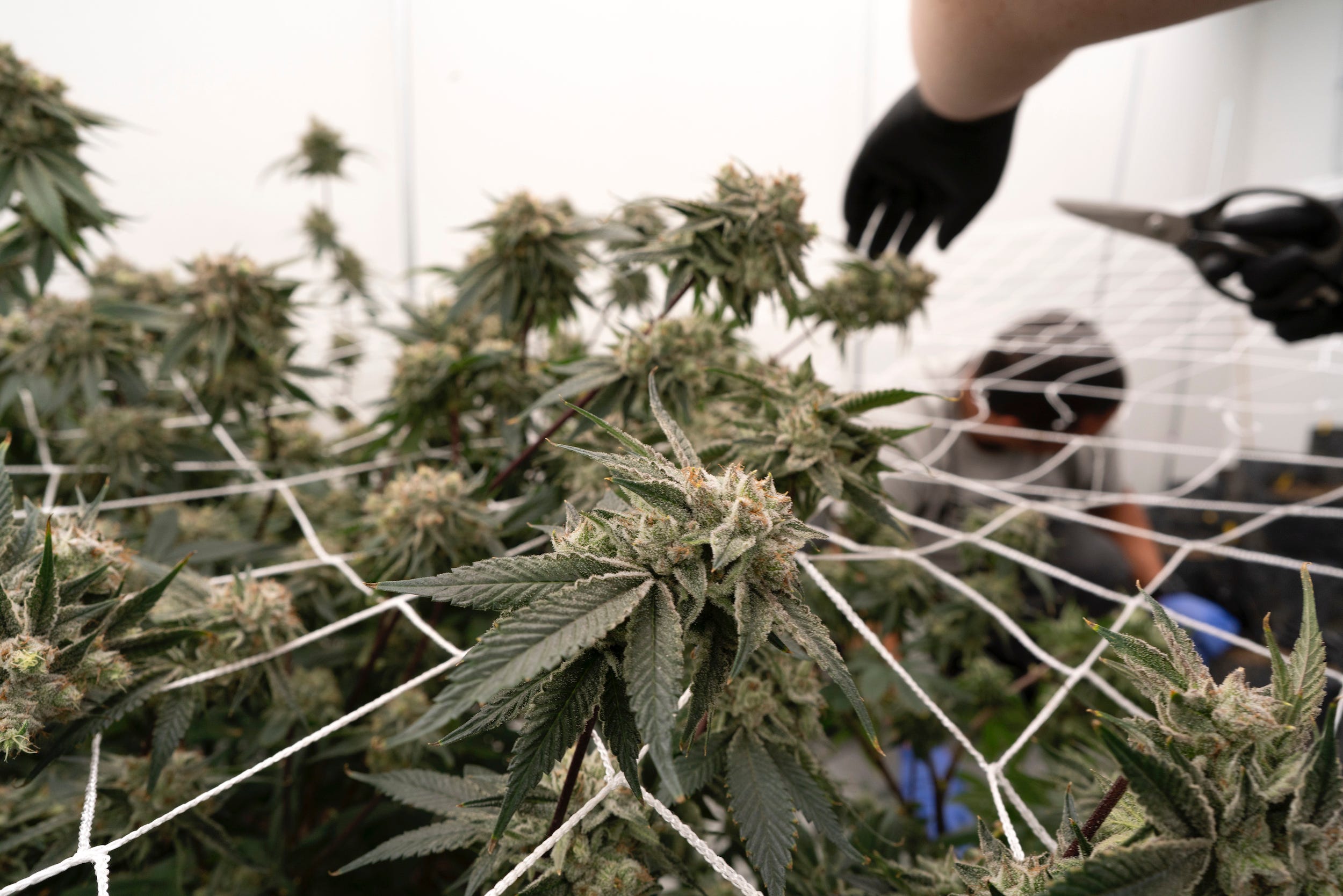 AP Photo/Richard VogelIn this Friday, May 8, 2020 photo workers harvest a fresh crop of marijuana at the Loving Kindness Farms in Los Angeles.

It’s been a long year of conflict and partisanship. Still, on Tuesday, citizens around the US came together to fight back against a decades-old and overwhelmingly unsuccessful war on drugs.

On Tuesday, Oregon and Washington, DC, voters took it even further. The US capital has deprioritized the prosecution of those who possess psilocybin â€” a compound in psychedelic mushrooms â€” and Oregon has created a program that will licence distributors to supply and oversee the use of the trippy fungi.

Oregon also became the first state to decriminalize the possession of small amounts of street drugs, including cocaine, heroin, and methamphetamines, though it will remain illegal to sell these substances.

“The realisation is occurring now, in a lot of places, that we’re spending an awful lot of money on the so-called war on drugs,” said Dennis Kenney, a criminal justice researcher, professor at John Jay College of Criminal Justice, and former South Florida police officer. “The results are not effective. We’re not showing any change in the number of addicts, so people are starting to question whether the expenditure is right.”

Over the last six months, citizens have taken to the streets pushing for police reform, arguing that officers have been tasked with doing jobs that they’re not suited for â€” including handling mental health and addiction emergencies â€” which have too often resulted in violence and over-incarceration.

“We’ve tended to dump these problems on [police] because we don’t really want to do what it takes to address them appropriately,” Kenney said. “If we were to remove the police from the business of drugs, we would significantly decrease the incarceration in the country. We would significantly decrease the conflict between police and communities in the country.”

Legalizing drugs, including marijuana, has created a sea change among police forces who have typically used minor offenders’ arrests as a stepping stone to finding dealers and supply chains.

In many cases, people with low-level offences are told they will be given reduced fines if they reveal their drug sources.

With legalization, though, arresting someone for possession in many states will no longer be possible. Like Kenney, some experts believe that moving away from the aggressive prosecution of drug-related offences could be a good thing.

“While there might be a loss of securing informants through threat, police could essentially shift to being able to build more collaborative pubic health relationships with individuals who have received treatment, as opposed to just holding the threat of punishment over their heads,” Erik Girvan, an associate professor of law at the University of Oregon, said. “While that affects the power dynamic, it might also affect cooperation and develop the ability to have relationships, and have discussions, without threats looming over.”

Past research shows that so far, not all people benefit equally from the changes in the law. 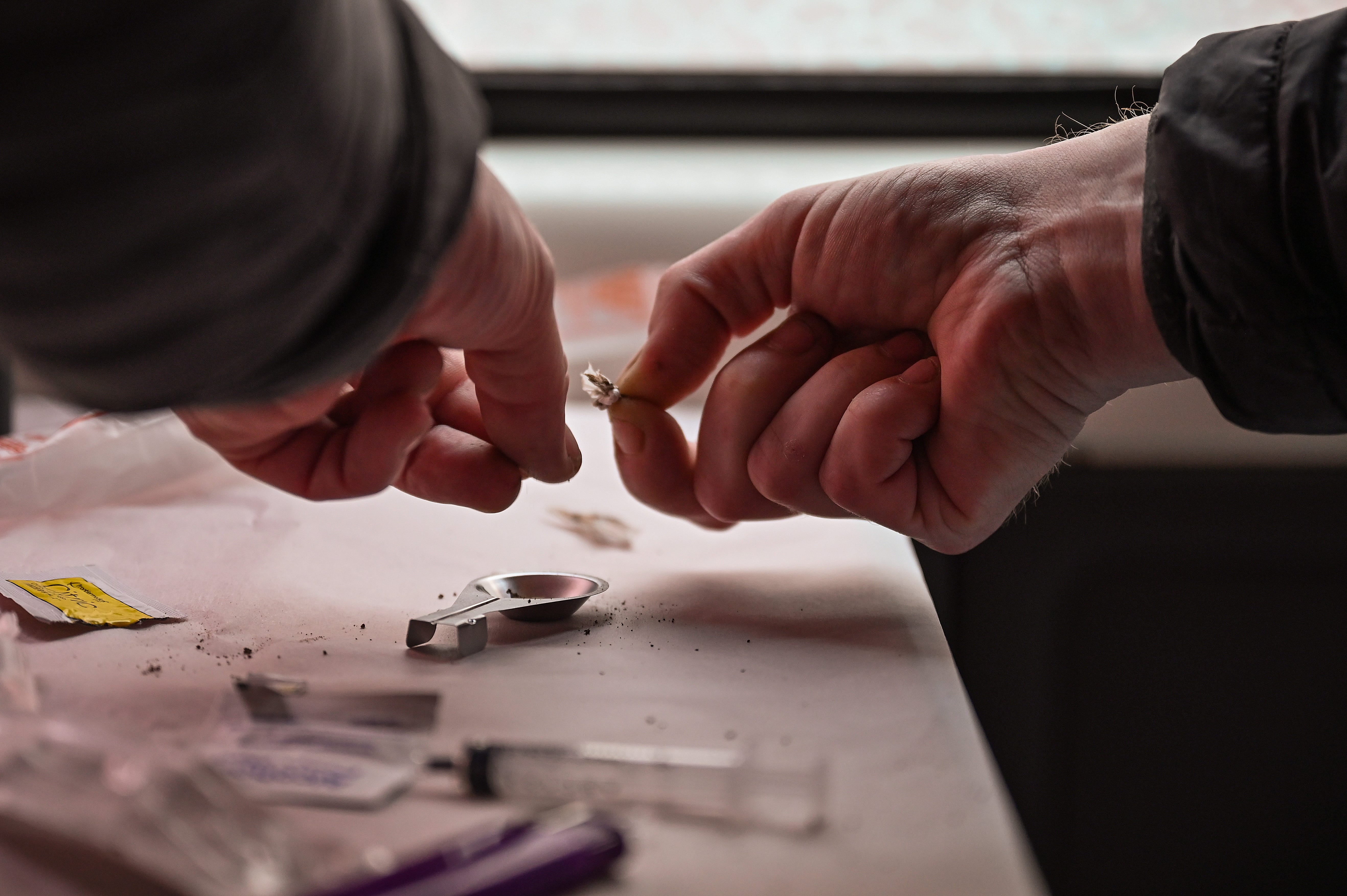 Getty ImagesA drug user prepares heroin before injecting inside of a Safe Consumption van on September 25, 2020 in Glasgow, Scotland.

Criminal justice experts, like Kenney, say that with or without a change in statutes, a shift in public opinion has already prompted most police officers to turn the corner on taking an interest in low-level drug crimes, especially when it comes to marijuana.

“What it really signals to the police is that it’s socially acceptable behaviour so they have less of an incentive to spend their time and energy on something that the public not only doesn’t care about but basically approves of,” Kenney said. 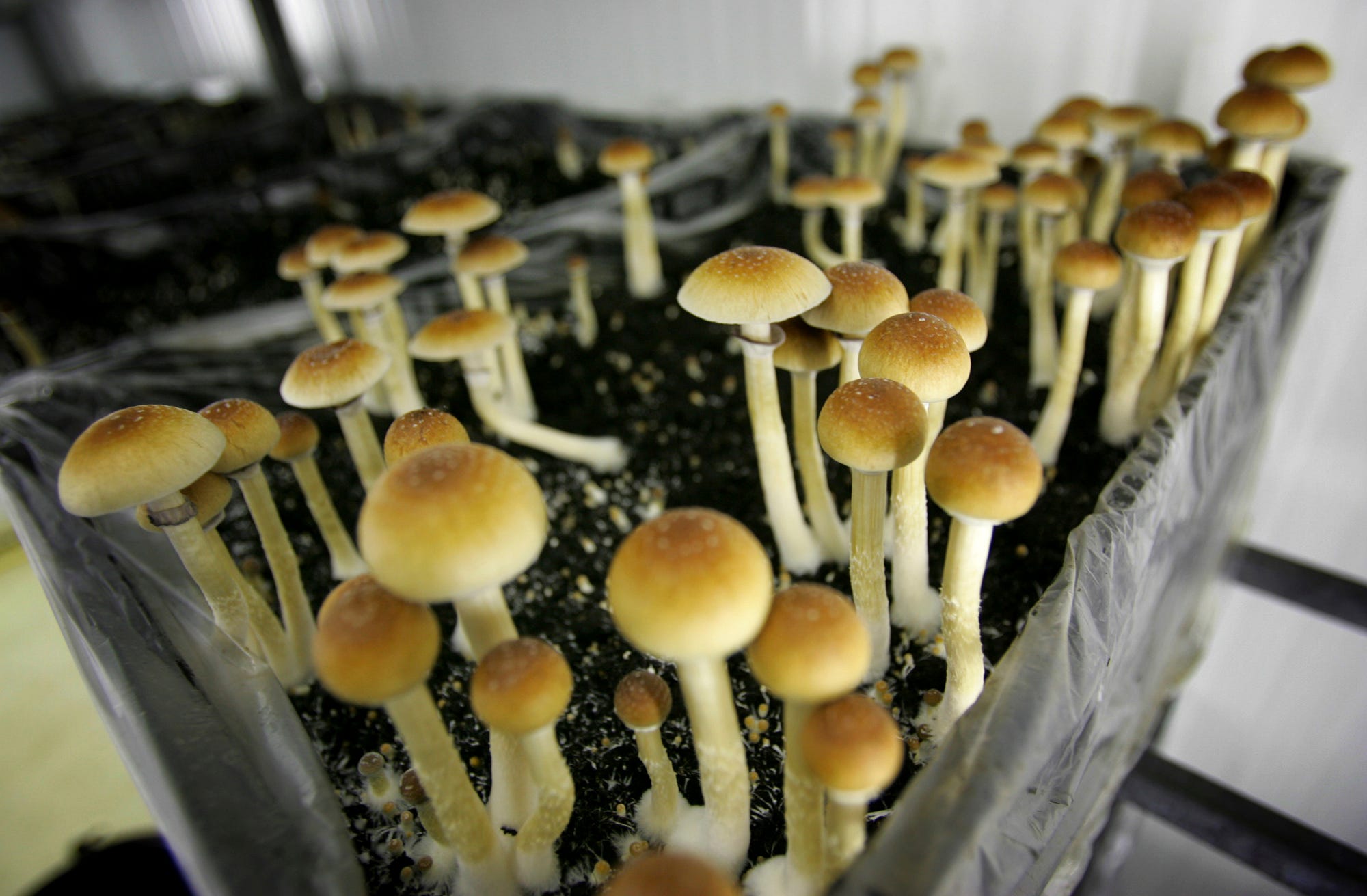 PETER DEJONG/ASSOCIATED PRESSFILE – in this Aug. 3, 2007, file photo magic mushrooms are seen in a grow room at the Procare farm in Hazerswoude, central Netherlands.

Girvan agrees that many state law enforcement agencies have already moved on from thinking police are the answer to addiction issues.

In Oregon, for example, many communities are using the CAHOOTS mobile assistance service, which sends two-person teams of medics and crisis workers to assist people suffering from mental health issues or addiction. The model relies on mental health service providers in lieu of armed police officers.

“Most of the law enforcement that I’ve talked to recognise that the sort of revolving door of arresting somebody who is addicted to drugs, have them do a short time in jail or on probation, and then have them still be on drugs and re-arrest them, is not really working,” Girvan told Insider. “They don’t necessarily really want to do it either.”

The new model that states are moving toward is one that prioritises public health over punitive treatment, he said. 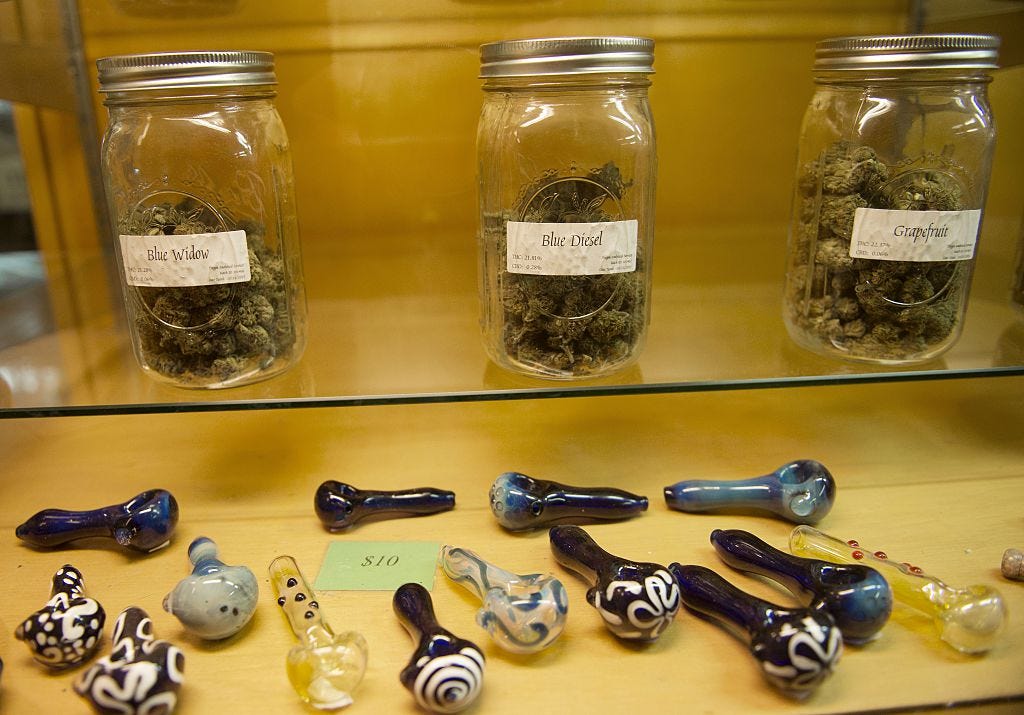 ANDREW CABALLERO-REYNOLDS/AFP via Getty ImagesDifferent strains of marijuana for sale are displayed at a dispensary in Eugene, Oregon

The Pacific Northwest has been ahead of the curve on drug reform, but research shows not everyone is benefiting equally

Oregon was the first to decriminalize cannabis in 1973. It was among the first to legalise medical and recreational marijuana, as well.

Now it’s made history again, as the first place in the country that has removed punitive penalties for the possession of small amounts of hard drugs.

Those who are caught with the drugs will be able to choose between paying a $US100 fine or getting an addiction assessment at a state addiction and recovery centre. The centres, which are created through the same law that decriminalized the drugs, will be open 24 hours and have providers that can refer clients to treatment, if necessary.

Girvan said that, unlike marijuana, the decriminalization of street drugs wouldn’t necessarily lead to their legalization. Distribution of meth, heroin, cocaine, and other drugs will continue to be illegal on both the state and federal level.

“I’d never say nobody is talking about it, but in terms of policy, that’s not what this is about,” Girvan said. “Oregon, like a lot of places in the country, does have a pretty significant issue with folks who are addicted to methamphetamines or other street drugs. The question really isn’t, ‘is that good?’ but ‘what’s the most effective way to help those people to get back on track?'”

Beau Kilmer, the director of drug policy at RAND Drug Policy Research Centre, told Insider that there is still a lot to learn about how Oregon’s measures will affect public health, access to treatment, and policing.

“It’s going to be really interesting to see how this turns out in terms of police-community relations, as well as stigma,” Kilmer said of Oregon’s recent change. “I also think there is a lot of work that will have to take place on the ground, talking to people: Talking to people who use drugs, talking to law enforcement officers, talking to those doing investigations. That’s where we’ll get the real insight on this.”

Researchers of the shifting US drug policy have found that by and large young people and minorities don’t benefit equally from the shift in drug laws.

In general, Kilmer said, states where possession of marijuana is no longer a criminal offence, have seen significant drops in marijuana-related arrests.

In Oregon, though, there has been an increase in the number of juveniles that have been charged with marijuana-related offences, despite no evidence that there is an increase in drug use among kids, Kilmer said.

“Legalization hasn’t eliminated disparities. It has decreased them in some places, but there has also been evidence that it might have increased racial disparities,” Kilmer said.

Cannabis-related arrests for Black Americans in Washington state â€” the first state in the US to legalise the recreational use of marijuana â€” didn’t drop as significantly as it did for white Americans, he said.

The ghosts of past racial disparities, too, live on in the age of legalization.

People of colour have been disproportionately affected by marijuana laws, being much more likely than white Americans to rack up a criminal record for using it.

As recently as 2018, more than 600,000 people in the US were charged for possessing marijuana. Despite making up only 31% of the population, Blacks and Latinos accounted for nearly half of the arrests.

“One of the things about legalization is that in most places public consumption is still illegal,” Kilmer said. “If you live in an apartment building or public housing, where it can be harder to consume indoors, people are more likely to use outdoors, where there is still a risk of arrest.”

“There are a lot of reasons for racial disparities,” he said. “You’ve got racial bias, as well as policing strategy. But also you’ve got people using outside, purchasing outside, and making more purchases, that could contribute to it.”

And now that citizens can open their own businesses to sell recreational marijuana in some states, many people of colour who were locked up on drug laws that have been overturned are locked out of the booming industry. 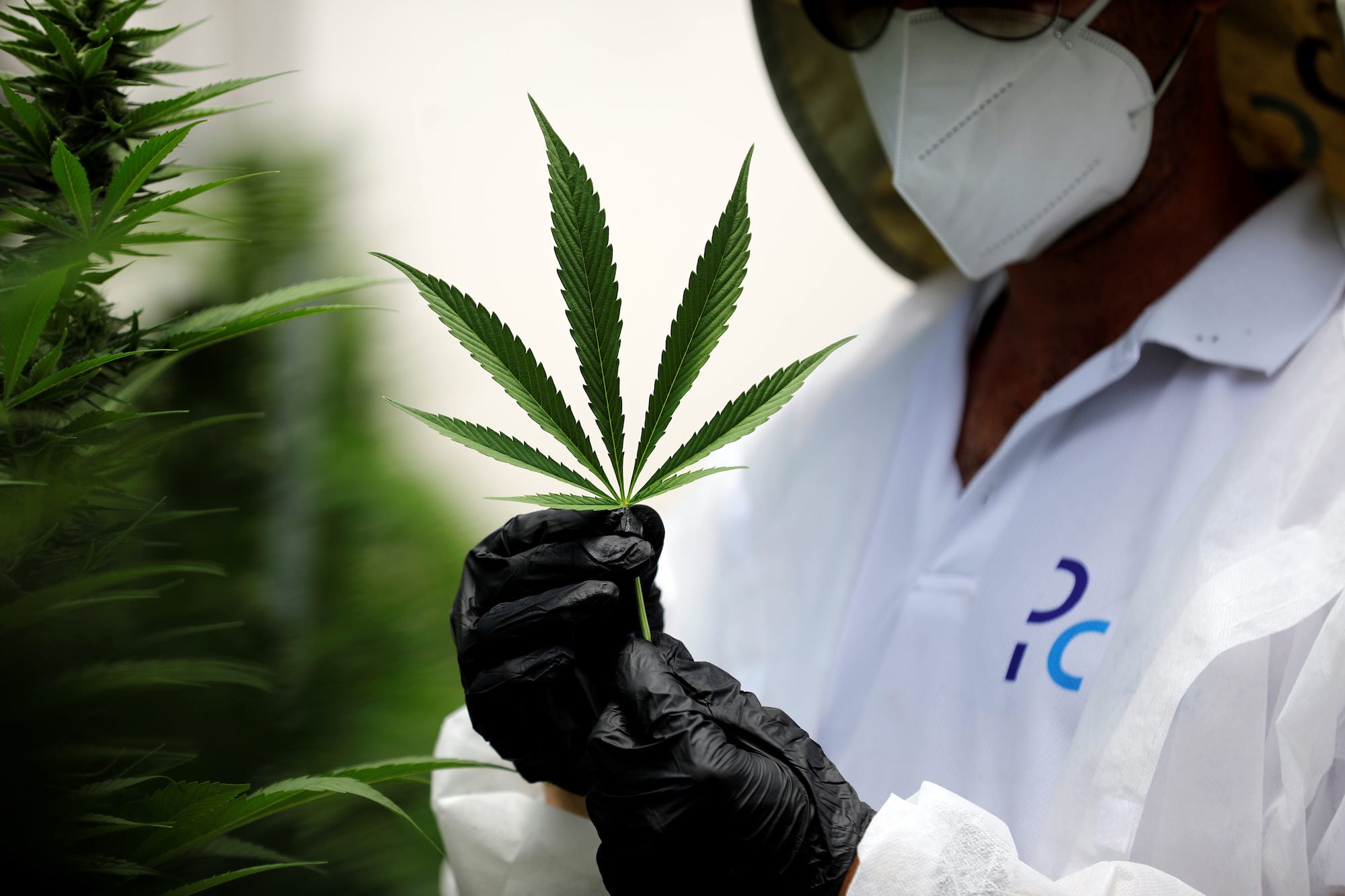 As time passes, more states will move toward legalization

Attitudes toward drug use have shifted substantially since the 1970s and the beginning of the “war on drugs.” Kenney expects public opinion and, in turn, the law, to continue to progress.

“I remember in the 1970s when I joined the police department, any use of any drugs, even marijuana, would prohibit you,” Kenney said. “Now, when you go through the selection process, you just have not currently be high. So there’s a much more relaxed attitude about individual use.”

“As places like Oregon have expanded into cocaine and heroin, I think that’s where you’ll see some greater difficulty embracing it,” he said. “But even that will happen over time.”

In the meantime, states will adjust to their new statutes and figure out what kind of alternatives should be used in place of police when handling issues related to mental illness and substance abuse.

“It’s not a question of do we remove police from this. It’s also a question of who’s going to do it instead. Police are perfectly willing to concede, as they are with the mentally ill, that they’re not well suited to deal with it,” Kenney said. “But there has to be an alternative.”

Kenney expects that most states will deal with drugs the same way they deal with alcohol â€” in that it’s not OK to be belligerent in public â€” but that it’s a health issue rather than a criminal one.

“I think the way the votes have been going is a real indication that people do understand, that they’re getting it: that the war on drugs has been going on for a very long time not particularly successful, but costing a great deal of money,” Kenney said.

“The question is, what’s doing more public harm, the war on drugs or the drugs themselves?” Kenney said. “And I think the public is starting to see the war on drugs is the greater problem.”