8. Timothée
Age is a hot topic in “Emily in Paris” for multiple reasons.

For starters, lead actress Lily Collins mistakenly said that the titular character is 22, causing an uproar that caused her to later walk back on her words.

Emily’s real age, 29, isn’t divulged until the second season. Regardless of whether Emily is 22 or 29 or anywhere in-between, it’s inappropriate for her to be with a 17-year-old, hence Timothée’s bottom-of-the-barrel ranking.

Emily meets Camille’s younger brother (played by Victor Meutelet) while touring his family’s chateau on the eighth episode of season one. In her defense, she’s clueless about his age. When he mentions “college,” she doesn’t realize the word translates to “high school” in English and assumes he’s Camille’s other adult brother.

When she does find out that Timothée is a minor, Emily is mortified to have slept with him. Her lingering discomfort is obvious upon her return to the chateau in the following season.

Timothée means well, with his boyish charm and extensive knowledge of champagne production, but given that he’s only a teenager, he’s all-around wrong for Emily.

7. Fabien
The French painter (played by Michel Biel) presents himself as a promising romantic prospect when he meets Emily on the outskirts of a crowded party on the third episode of season one.

Their conversation isn’t very deep — considering that he barely speaks English, and she knows about five words in French — but they get to know each other through an adorable play on eye spy that weaves together both languages.

Fabien’s English comes out a little too clearly, however, when he tells Emily that he likes to sleep with American women. She leaves him on the cobblestone street alone, unimpressed by his intentions and forward nature.

Fabien could have been a light-hearted fling, one that would have no doubt improved Emily’s French, but he was much too direct and overtly sexual for Emily on the night he met her.

6. Doug
Emily’s relationship with Doug might have worked out if she stayed in Chicago, but she didn’t. And the moment she begins her new life in Paris, her long-distance relationship with the Cubs-obsessed Midwesterner (played by Roe Hartrampf) seems doomed.

Doug is never thrilled at the idea of his girlfriend moving across the Atlantic. When Emily tells him that her company offered her an opportunity to serve as the “American eyes and ears” at its French subsidiary, a luxury marketing firm called Savoir, he reacts with an unenthusiastic sigh and points out her lack of French competency.

When she does relocate, he absentmindedly wakes her up by calling her at 3 a.m. and drops the ball on his planned visit.

Doug may have been a fun boyfriend for Emily when she was stateside, and transcontinental relationships are a challenge for even the most compatible couples, but he isn’t nearly thoughtful, adventurous, or committed enough to stay in the ring past episode two.

5. Thomas
With a cinematic meet-cute at Café de Flore, one of the city’s most storied haunts, Emily and Thomas are off to a strong start on the sixth episode of season one.

She gets along swimmingly with the French professor of semiotics (played by Julien Floreancig) when it’s just the two of them, becoming enraptured in their witty banter and passionate sex.

But when they accompany Camille (Camille Razat) and Gabriel (Lucas Bravo) for dinner, Thomas reveals a new side of himself, one that believes he’s above everything and everyone.

“You really just don’t like to like anything,” Emily tells him after he refuses to see Swan Lake, a ballet that he scoffs is for “tourists.” It’s the final straw for her, and she sends him on his way with a middle finger.

Though he’s snobbish, egotistical, and rude, Thomas did show Emily a good time the night they met, he just probably shouldn’t have stuck around.

7. Gilles Dufour
Gilles Dufour may not qualify as a serious love interest since he only appears in one scene, but the French real estate agent does try to flirt with Emily. So, he scores a spot on the list.

In the series premiere, Gilles (played by Gauthier Battoue) helps Emily carry her luggage up six flights of stairs to her “Chambre de bonne.”

Once they enter the apartment, he doesn’t waste much time before asking her to grab a cup of coffee or a drink. A faithful girlfriend to Chicago-based Doug at the time, Emily turns Gilles down.

Gilles probably shouldn’t be flirting with a client on the job, especially after Emily makes it clear that she isn’t interested (and is probably jetlagged). However, he does lug her bags upstairs and offers to help her get settled in Paris, so he isn’t completely unforgivable.

If nothing else, he’s harmless.

5. Gabriel
Emily has been unable to escape Gabriel since moving to Paris, not that she’s tried very hard.

There’s no denying that she has chemistry with the French chef, who happens to live on the floor below her in her apartment building, but chemistry doesn’t make up for a lack of morals.

For starters, Gabriel is in a relationship with Camille, the friendly art gallerist that takes Emily under her wing when they bump into each other at the florist on episode four of season one.

Not only does Gabriel refrain from mentioning that he has a girlfriend when he bats his eyes at Emily in season one, but he seems perfectly at peace pursuing his partner’s friend.

The worst part is, Gabriel plays both sides, continuing to string Camille along even after he develops feelings for Emily. And when the opportunity arises for a newly-single Gabriel to sleep with Emily at the end of season one, he doesn’t even consider Camille’s feelings.

“You didn’t do anything to Camille. You did do a lot of things to me,” he tells Emily.

There’s a chance that Gabriel would be different, more committed, and honest if he was with his American neighbor. Based on his past behavior and their existing baggage though, it’s not likely.

After all, he acts outwardly bothered by Emily’s relationship with Alfie (played by Lucien Laviscount) throughout season two and then proceeds to get back together with Camille, moving in with her without so much as telling Emily.

2. Mathieu Cadault
Mathieu, the nephew of world-famous fashion designer and Savoir client Pierre Cadault, is drawn to Emily from the moment he meets her on the seventh episode of season one.

As the head of business affairs for Pierre’s brand, he works closely with Emily but also makes it obvious that he’s interested in building a relationship with her outside of the office. The posh, mature businessman (played by Charles Martins) doesn’t come across as pushy, however, and he respects her boundaries in professional settings.

When Emily does go out with Mathieu, he’s unafraid to put his cards on the table: He plans a romantic boat ride on the Seine river, shows her his favorite views of the city, and invites her to a weekend getaway in Saint-Tropez. And when she describes her small-town upbringing, he never turns up his nose.

Perhaps Mathieu’s most admirable moment of all comes in season two when he finds out that Emily slept with Gabriel after accepting his invitation to the French Riviera. He doesn’t get angry but respects his own boundaries, leaving her mess behind him.

Mathieu does everything right. He’s romantic, kind, and down-to-earth, but Emily just doesn’t gravitate toward him the same way she does to others.

Emily meets Alfie, a British banker, in her introductory French class. He’s handsome, playful, and tells it like it is. He and Emily don’t hit it off right away, as his frank pessimism clashes with her boisterous optimism.

Forced together as project partners, they’re forced to sit down and really talk. And with time, they slowly fall for each other.

Alfie doesn’t play games with Emily. He makes an effort to get to know her friends. He supports her career ambitions. And when he finds out that he has to return to London, he extends his time in Paris to see more of her.

In the season two finale, Alfie allows himself to become completely vulnerable and asks Emily to try dating long distance.

“You can plan all the logistics you want. Alternating weekends, color-coded schedules,” he offers.

Emily’s relationship with Alfie is healthy and straightforward with real potential to last. Or, at the very least, the potential to last into “Emily in Paris” season three, should Netflix renew the show. 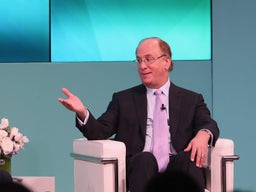