There are some projects that the Kremlin would love us to forget.

The Russian military has long been a bogeyman for the West, with Cold War memories lingering even after the fall of the Soviet Union.

However, over the years Russia’s fierce competition has produced a number of duds alongside its successes, as the country has scrambled to stay one step ahead of its geopolitical rivals.

The following is a collection of some of the most ambitious military projects that resulted in spectacular failures.

The Tsar tank has achieved almost mythical status since the unusual vehicle was first tested in 1914. Due to weight miscalculations, its tricycle design often resulted in its back wheel getting stuck and its lack of armour left its operators exposed to artillery fire. But it wasn't Russia's only tank failure. The Soviet Union's T-80 was the first production tank to be equipped with a gas turbine engine when it was introduced in 1976. When it was used during the First Chechen War it was discovered that when the tanks got hit on their side armour, its unused ammunition exploded. The performance was so poor that the Ministry of Defence cancelled all orders for the tanks.

The Mikoyan Project 1.44 (MiG 1.44) was the Soviet Union's answer to the US's development of its fifth-generation Advanced Tactical Fighter (ATF) in the 1980s. The Raduga Kh-22 air-to-surface missile was designed as a long-range anti-ship missile to counter the threat of US aircraft carriers and warship battle groups. Russia's flagship aircraft carrier, Admiral Kuznetsov, is the only aircraft carrier of its type to enter service after its sister ship was scrapped due to the fall of the Soviet Union. Unfortunately, the R-29RMU Sineva missiles failed to launch from the nuclear submarines Novomoskovsk and Karelia because of unspecified technical problems leaving a lot of red faces all around. Putin subsequently ordered his defence minister to conduct an urgent review of the programme. In 2004 India bought aircraft carrier the Admiral Gorshkov from Russia for $2.35 billion. It was due to be delivered to India by 2008. But refurbishing the ship was delayed and the carrier wasn't delivered until 2012. When it was eventually sea tested, seven out of eight steam boilers of the propulsion machinery were out of order. Russia blamed poor Chinese-made materials. In 2010 Russia announced a deal to buy 2 Mistral helicopter carriers from France for €1.37 billion. In 2013, shocked sunbathers on Russia's Baltic coast were confronted with a giant military hovercraft bearing down on them. A spokesperson from Russia's navy said the beach was supposed to have been cleared for the exercise. 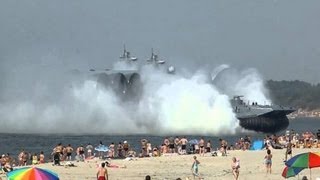