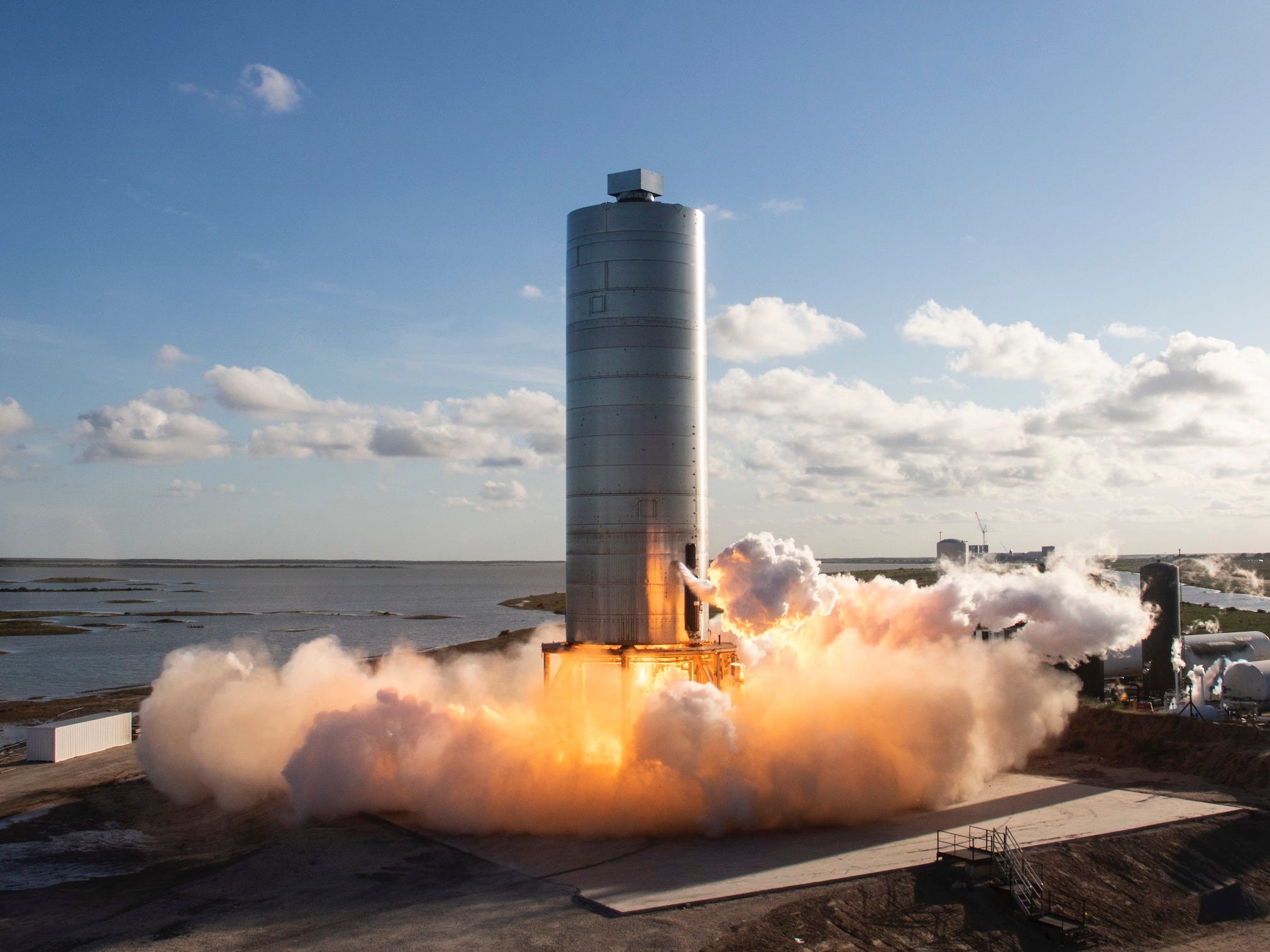 SpaceXThe SN5 Starship model lifting off for a ‘hop’ test on Tuesday, August 4, 2020.

SpaceX is one giant grain-silo launch closer to reaching Mars.

The aerospace company, founded by Elon Musk in 2002, launched and landed an early prototype of a potentially revolutionary rocket system called Starship at 7:57 p.m. ET on Tuesday. The flight occurred at SpaceX’s expanding rocket factory, development, and test site in Boca Chica, a relatively remote region at the southeastern tip of Texas.

“Mars is looking real,” Musk tweeted shortly after the flight of roughly 492 feet, or 150 meters, into the air, later adding: “Progress is accelerating.”

SPadre.com, which has a camera trained on SpaceX’s launch site from about 6 miles away on South Padre Island, captured the launch from start to finish with a 24-hour live feed on YouTube. In the background, audio of a livestream hosted by NASASpaceFlight.com (which caught yet another view with a different camera and angle), audible cheers could be heard coming from on-site SpaceX employees and contractors.

The clip below shows a profile of the whole flight from SPadre’s feed.

In the movie, the prototype takes off using a single Raptor rocket engine, translates across the launch site, deploys a set of landing legs, and touches down on a concrete pad.

SpaceX shared shared its own recordings of SN5’s first flight in a supercut posted to Twitter.

The one-minute clip begins with a Southeast-facing view of SpaceX’s launch site taken by an aerial drone. During launch, a chunk of the metal support stand that SN5 was previously mounted to tears off. The video then cuts to a view from inside the vehicle’s engine skirt as the Raptor fires and gimbals (or wiggles) to stabilise the giant vehicle, then the vehicle’s stubby landing legs deploy. Finally, the movie cuts to a camera attached to the outside of SN5’s stainless-steel hull as the prototype touches down.

Musk later tweeted that Starship’s next set of landing legs “will be ~60% longer” and that a version further down the line “will be much wider & taller” like the legs of a Falcon 9 rocket booster, “but capable of landing on unimproved surfaces & auto-levelling” – in other words, optimised to landing on the moon or Mars.

Below is that YouTube channel’s edited recording of the experimental launch.

If Starship and its Super Heavy rocket booster end up being fully reusable, Musk has said, the system may reduce the cost of launching anything to space by about a thousandfold and enable hypersonic travel around Earth.

But first, SpaceX has to see whether its core designs for Starship work. To that end, the company is moving briskly to build, test, and launch prototypes.

Tuesday’s “hop” flight – Musk said ahead of the flight that SpaceX was targeting an altitude of 150 meters – represents the first flight of any full-scale Starship hardware. It’s also a crucial step toward informing future prototypes and, ultimately, launches that fly Starships into orbit around Earth.

SpaceX had hoped to attempt a flight of SN5 on July 27, but Hurricane Hanna damaged a component that had to be fixed, Musk said. A previous notice to airmen suggested the company would try to fly SN5 on Sunday – the same day as its attempt to land two NASA astronauts in the Gulf of Mexico – but the launch window came and went. (SpaceX’s Demo-2 was a historic test flight of the company’s Crew Dragon spaceship, a vehicle developed with about $US2.7 billion in NASA funding.)

The above photo shows the SN5 prototype from above during a test-firing of its engine on July 30.

SN5 is the latest of several full-scale Starship prototypes that SpaceX has built in Texas. The previous versions have either crumpled during tests or, as was the case on May 29, catastrophically exploded. 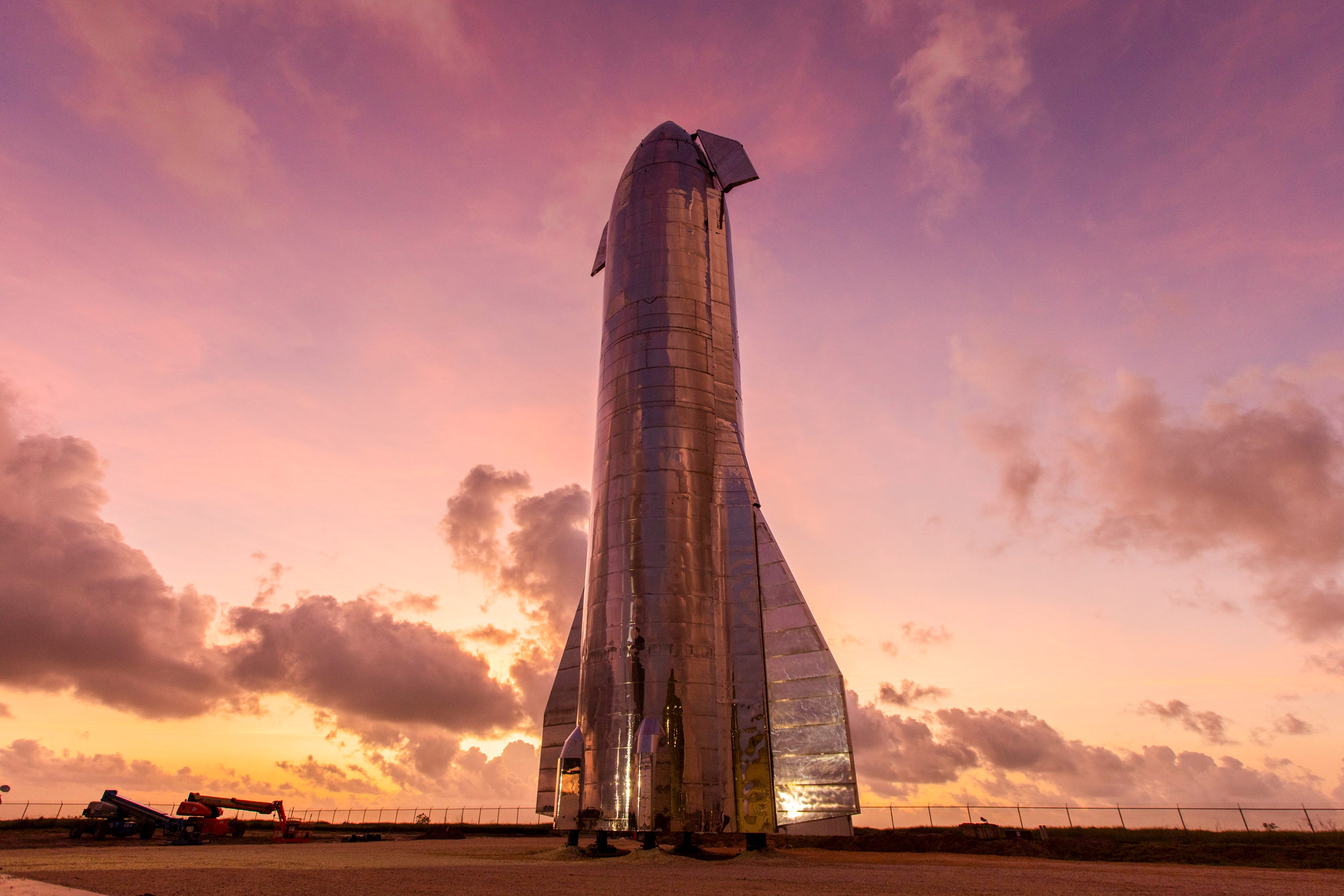 SpaceXStarship Mark 1, or MK1, on a stand in Boca Chica, Texas, in September. The vehicle’s hull was later breached during a pressure test in November.

Each failure has taught SpaceX valuable lessons to inform design and material changes – tweaks that Musk says are already being worked into SN6, SN7, and SN8 prototypes, which are in various stages of assembly within the company’s expanding and bustling work yards in South Texas.

The steel vehicles don’t have wing-like canards or nosecones attached, in case something goes wrong in their earliest phases of testing, so they look more like flying fuel tanks or grain silos than rocket ships.

But as last year’s test launch of an early Starship prototype called Starhopper showed, the flights of even experimental vehicles (shown above) can impress: On August 27, Starhopper soared to a similar height as SN5, translated across a launch site, and landed on a nearby concrete pad.

SpaceX obtained a launch licence from the Federal Aviation Administration to send Starship prototypes on a “suborbital trajectory,” meaning the experimental rocket ships could reach dozens of miles above Earth before returning and landing. It’s uncertain, however, whether SpaceX eventually plans to launch SN5 on such an ambitious flight path after Tuesday’s “hop.”

The company couldn’t attempt more ambitious flights until late August at the soonest, though. On July 23, SpaceX asked the Federal Communications Commission for permission to communicate with prototypes flying as high as 12.4 miles, or 20 kilometers,within the next seven months. The earliest date noted on the request, which is still pending, is August 18.

Musk said after the flight of SN5 that the next phase of testing wouldn’t fly prototypes very high, at least initially.

“We’ll do several short hops to smooth out launch process, then go high altitude with body flaps,” he tweeted on Tuesday.

SpaceX is also pursuing a launch licence for full-scale, orbital-class Starship-Super Heavy vehicles. Musk hopes Starship will launch a cargo mission to Mars in 2022, send a private crew around the moon in 2023, return NASA astronauts to the lunar surface in 2024, and even begin sending people to Mars the same year.

This story has been updated with new information since its publication.