Elon Musk claimed Tesla stock was priced 'too high,' causing shares to fall and shareholders to react. It's the latest in a string of controversial comments from the Tesla CEO over the past 2 months. 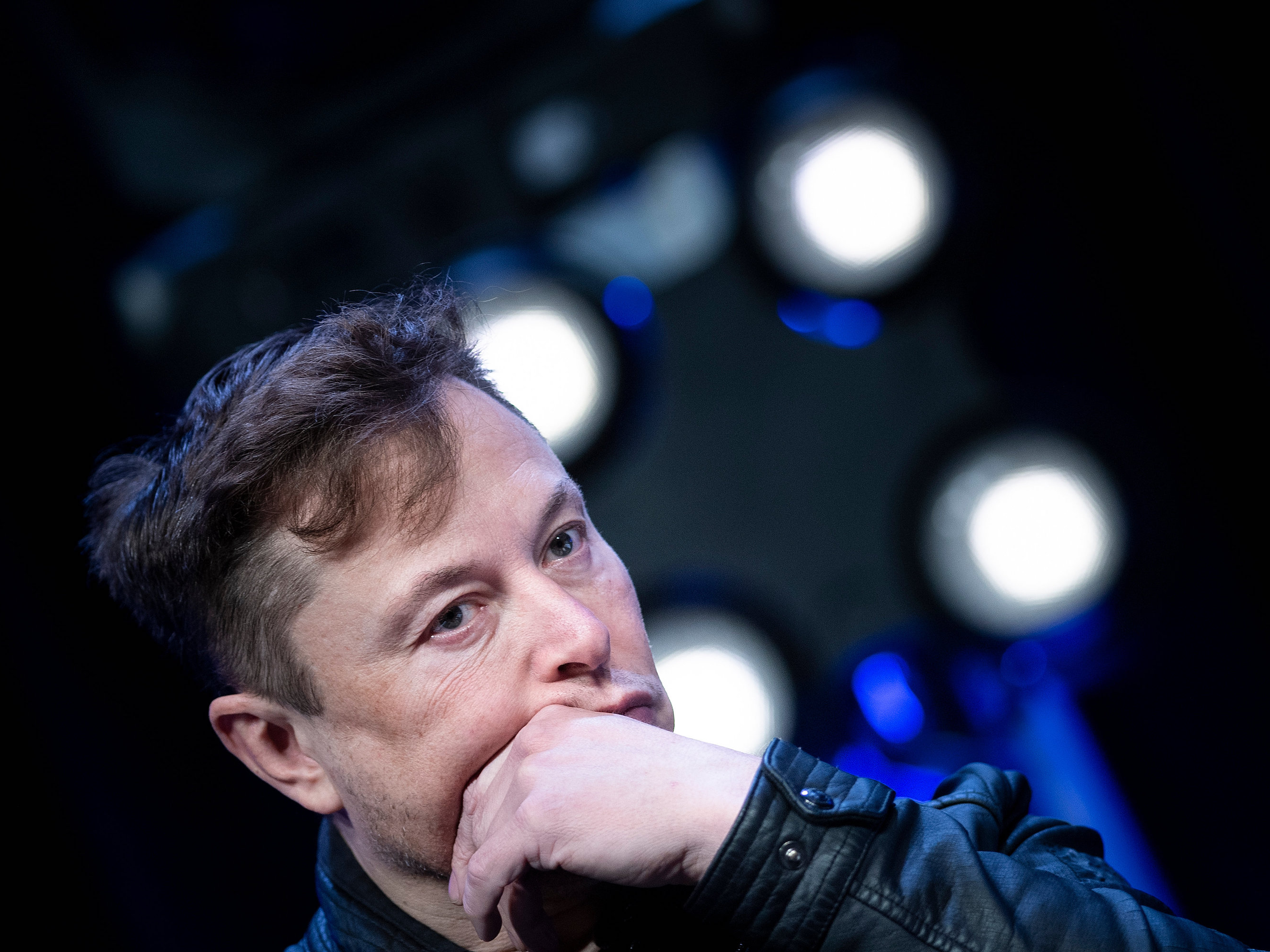 Throughout the coronavirus pandemic in the US, Tesla and SpaceX CEO Elon Musk has been outspoken about his thoughts on everything from ventilator shortages to possible treatments to the severity of the virus overall.

Musk has a history of speaking out during times of crisis. In 2018, for example, Musk offered to build a “kid-size” submarine to rescue 12 boys and their soccer coach stuck in a flooded cave in Thailand. When a British diver called Musk’s actions a “PR stunt,” Musk called the diver a “pedo guy” in a since-deleted tweet. (The comment sparked a defamation lawsuit, but Musk has since been cleared).

He’s also frequently shared his thoughts on everything from Tesla short-sellers to the media, and has landed in hot water over erratic tweets like his “funding secured” fiasco in 2018.

But as the coronavirus crisis continues to affect the US and the number of confirmed coronavirus cases in the country has surpassed 1 million, Musk’s recent behaviour has been scrutinised. Government officials have reportedly questioned whether Musk delivered the number of ventilators he promised, and everyone including Ariana Grande’s mother and Musk’s own fans have called his statements on reopening the economy “irresponsible.”

Here’s a timeline of Musk’s behaviour throughout the coronavirus crisis.

Musk spoke out about the coronavirus for the first time on March 6, calling panic over the virus “dumb.” 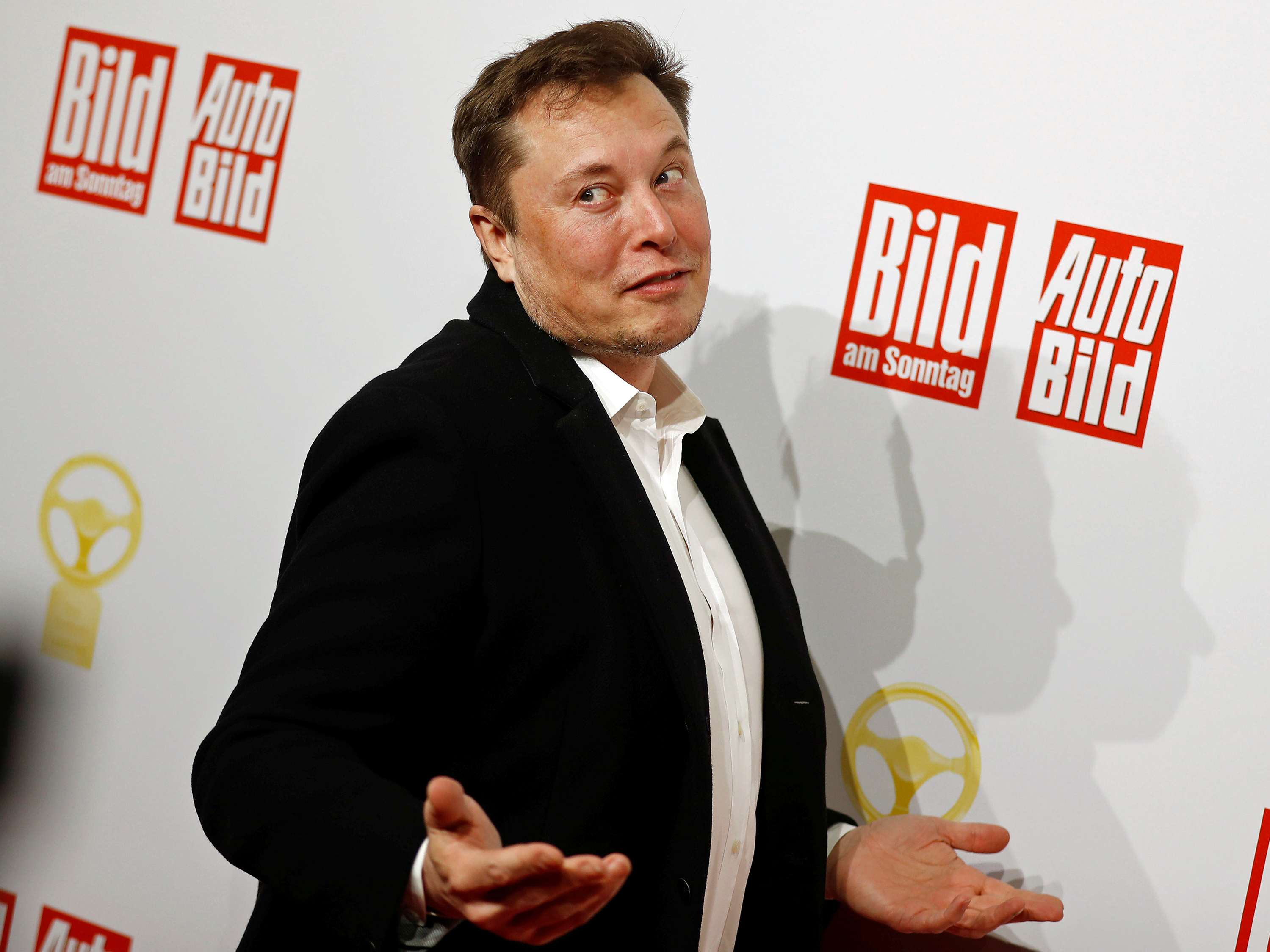 Musk’s first comments on the virus came in early March with a brief tweet:

The coronavirus panic is dumb

Musk says his companies will start producing ventilator parts in the event of a shortage, then says they likely won’t be needed. 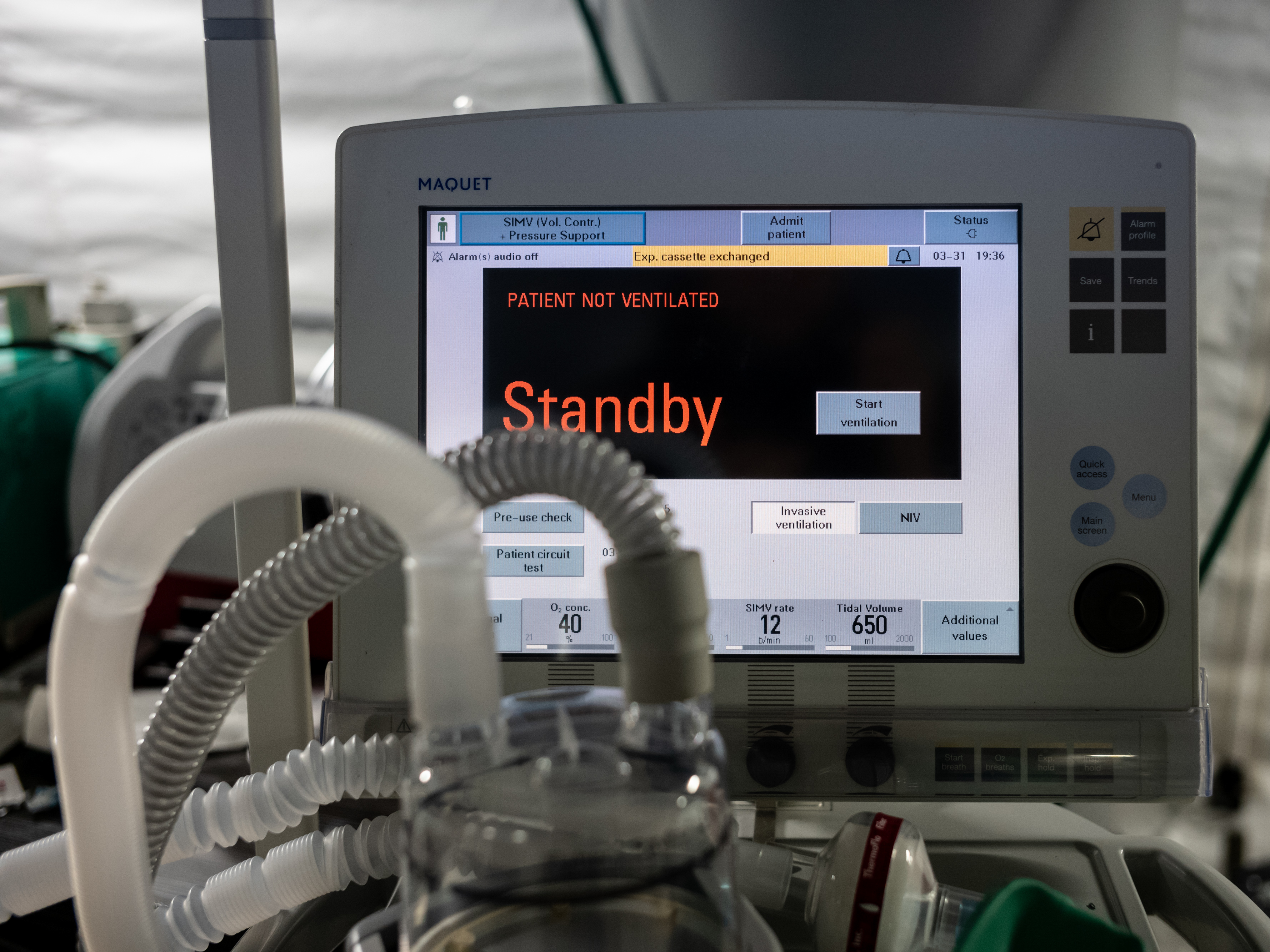 In a series of tweets in mid-March, Musk said Tesla and SpaceX factories already produced sophisticated components, and that making ventilators wouldn’t be a challenge by comparison.

He tweeted again the next day, saying his companies were already working on the ventilators. Soon after, he vowed that Tesla’s Buffalo, New York, plant would “reopen for ventilator production as soon as humanly possible.”

“We’re working on ventilators, even though I think there will not be a shortage by the time we can make enough to matter,” Musk tweeted.

Musk falsely claims that children are “essentially immune” to the virus and agrees with a false claim that “deaths are levelling out” in Italy. Musk reiterated on Twitter in mid-March his stance that people were overreacting to the virus, saying that “the panic will cause more harm than the virus” in response to venture capitalist Jason Calacanis stating that the death rate was plateauing in Italy.

Exactly. My guess is that the panic will cause more harm than the virus, if that hasn’t happened already.

At the time, the COVID-19 death rate in Italy was continuing to rise at an exponential rate. Calacanis later acknowledged the error when someone pointed it out in response to his tweet.

Musk also stated that “kids are essentially immune” from the virus. Children represent a minority of confirmed cases, and some research suggests children and infants may be less susceptible to the virus than adults. But another study warns that there may be far more US children infected with the coronavirus than previously thought.

Musk plugs the malaria drug chloroquine a possible COVID-19 treatment, which is not scientifically proven. In several tweets in mid-March, Musk opened up about what happened when he contracted falciparum, a potentially fatal form of malaria that can affect the central nervous system or cause “acute respiratory distress,” according to the Centres for Disease Control and Prevention.

Musk said at the time that he thought a drug that was used to treat his illness could be effective in treating the novel coronavirus.

“Had near fatal case of falciparum,” Musk tweeted. “Would have died for sure if not for chloroquine. Doesn’t mean it works for C19, but maybe better than nothing.”

Since Musk’s tweets, the drug has become something of a household name. President Donald Trump became an advocate of the drug hydroxychloroquine as well, after he was reportedly told about it by Oracle cofounder and chief technology officer Larry Ellison, a close friend of Musk’s.

Musk says in late March he has secured 1,225 ventilators and shipped them to Los Angeles to be distributed to hospitals, saying that if anyone wants a free ventilator, “let us know!” 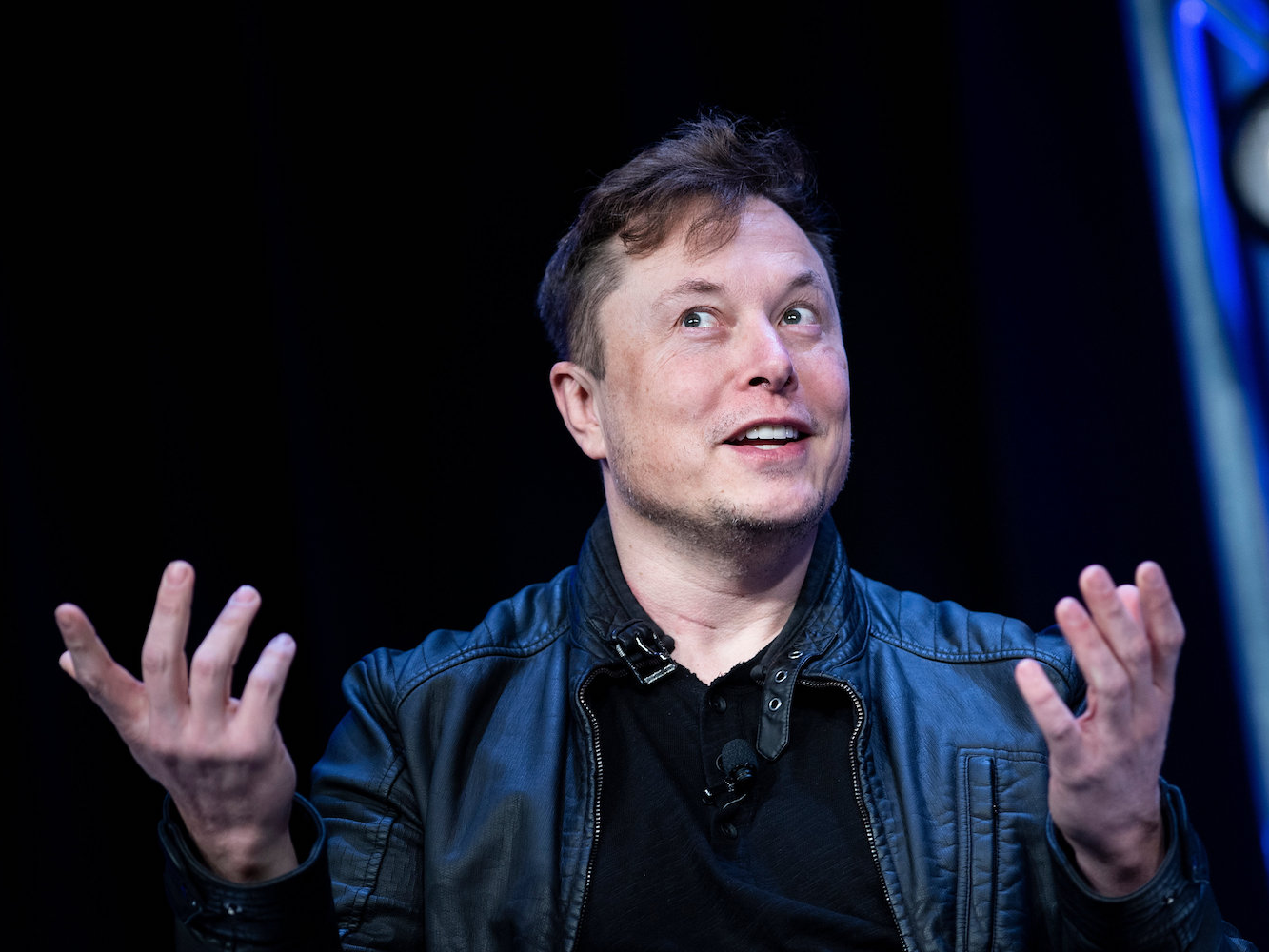 “China had an oversupply, so we bought 1255 FDA-approved ResMed, Philips & Medtronic ventilators on Friday night & airshipped them to LA,” Musk later tweeted.

Musk says N95 masks are “a pain to wear” and claims other masks are “better.” In late March, Musk replied to a Twitter user who asked for help for Louisiana’s hospitals, which she said didn’t have access to N95 masks, the respirator masks intended for healthcare workers.

“We’ll try to get & deliver as many as possible,” Musk said. “N95 masks are a pain to wear btw. Less onerous masks are better most of the time.”

It’s not clear who Musk was encouraging to use “less onerous masks,” but if worn correctly, N95 masks can block out at least 95% of small airborne particles and are recommended for frontline medical workers dealing with COVID-19 patients by the Centres for Disease Control and Prevention.

While Musk seemed to say Tesla would try to send a shipment of them to Louisiana hospitals, he also seemed to be encouraging switching to a looser-fitting mask like surgical masks, which do not protect healthy people from acquiring the illness. (Surgical masks are typically used by surgeons to prevent spreading their own germs to patients.)

The CDC has since started advising that everyone wear some sort of cloth face covering when they go out in public to the grocery store or to pick up necessities.

In mid-April, Musk lashes out at news outlets and California Gov. Gavin Newsom over reports that the ventilators he promised haven’t been delivered to hospitals. 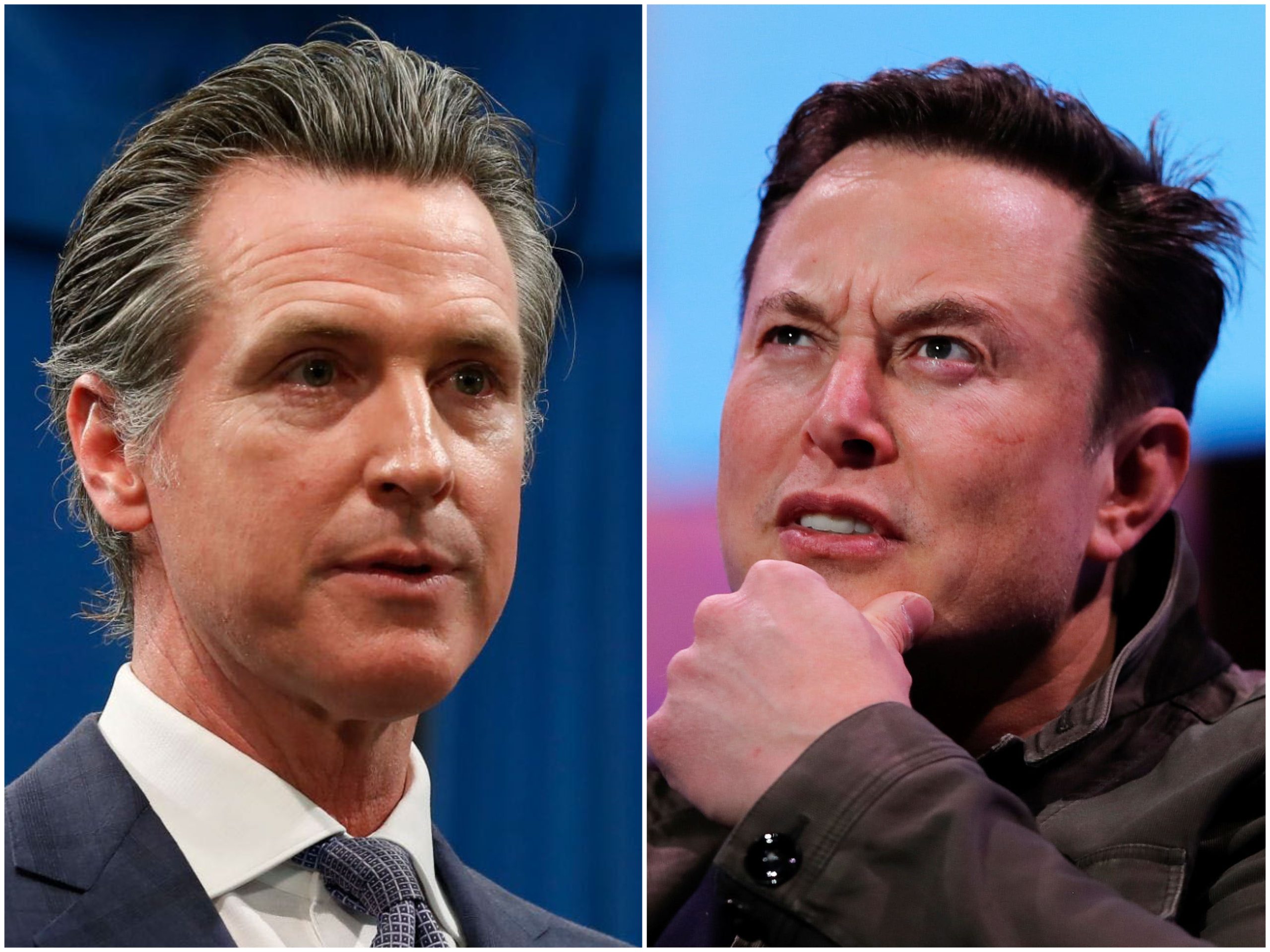 On April 16, CNN published a reporter that none of the 1,000 ventilators Musk had promised had been received by California hospitals, according to the governor’s office. The news was first reported by the Sacramento Bee.

A spokesperson for the California governor’s Office of Emergency Services told CNN at the time that “to date we have not heard of any hospital system that has received a ventilator directly from Tesla or Musk.”

But Musk said the report was false, making a dig at CNN and tweeting at Newsom to “please fix this misunderstanding.” Musk went on to say he had “receipts,” sharing a screenshot of an email between a Tesla employee and a Los Angeles official that said the ventilators had been tested, and a note from a California-based hospital CEO thanking Tesla for delivering ventilators.

Musk also retweeted postsfrommultiplehospitals – though only one based in California – thanking him and Tesla delivering medical devices, then tweeted out a “partial list” of hospitals that had received ventilators.

The confusion may have resulted due to the type of machines Musk was delivering: Rather than the invasive ventilators used on severe COVID-19 patients, most of the devices Musk had sourced were noninvasive ventilators called BiPAP and CPAP machines, which are typically used to treat sleep apnea, but can be used on COVID-19 patients. CNN spoke with four hospitals on Musk’s list, and all said they had received the latter type of device.

After Tesla reportedly had to scrap plans to bring employees back to work, Musk tweets “FREE AMERICA NOW” and says the government should “give people their freedom back.” 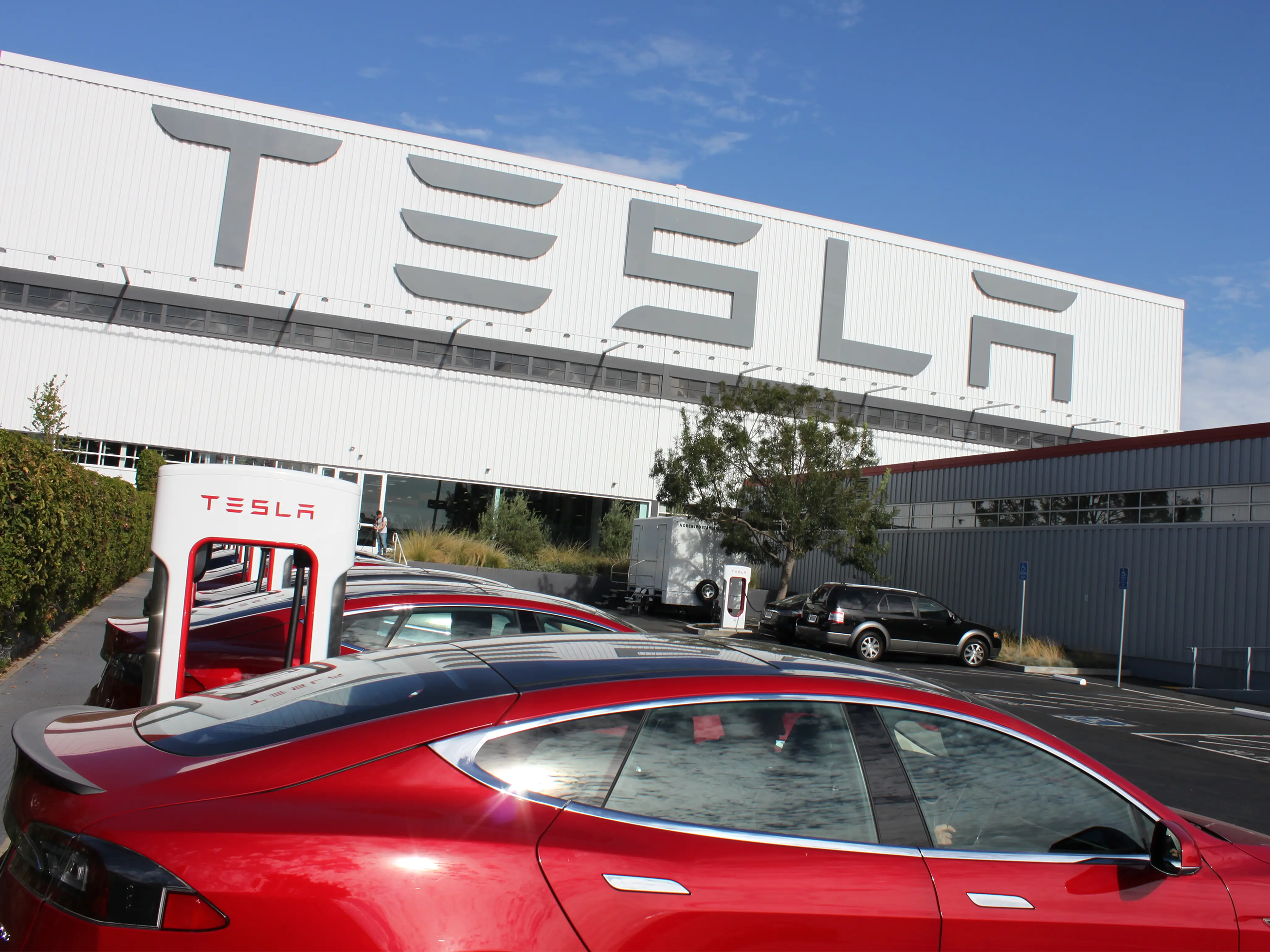 On Tuesday, CNBC reported that Tesla had scrapped its plans to bring employees back to work at its Fremont, California, plant after local officials extended orders that limit Tesla’s ability to resume its full operations.

In multiple tweets on Wednesday, Musk praised the state of Texas for beginning to reopen its retailers, saying that businesses should “reopen with care & appropriate protection, but don’t put everyone under de facto house arrest.”

In another tweet, Musk said the government should “give people their freedom back.” One post said simply, “FREE AMERICA NOW.”

Musk’s tweets sparked support from some of his followers, as well as backlash among doctors, tech workers, Musk fans, and Joan Grande, the mother of pop star Ariana Grande, who called Musk’s comments “incredibly irresponsible” and called for a boycott of Tesla. After Tesla posted surprise first-quarter profit on Wednesday, Musk said during a conference call that Tesla’s forced factory shutdowns were a “serious risk” to its business.

“Frankly, I would call it forcible imprisoning of people in their homes against all of their constitutional rights, in my opinion,” he said. “It’s breaking people’s freedoms in ways that are horrible and wrong and not why they came to America or built this country. What the f—. Excuse me. Outrage. Outrage.”

Musk went on to say that while Tesla will weather the storm, other businesses will not, and that the shutdown is undemocratic.

“If somebody wants to stay in their house, that’s great and they should be able to,” he said. “But to say they cannot leave their house and that they will be arrested if they do, that’s fascist. That is not democratic – this is not freedom. Give people back their goddamn freedom.”

Musk then tweets a link to data from the California health department to show that “hospitals in California have been half empty this whole time.” Almost immediately, the website crashes. Musk tweeted a link to the data portal for the California Health and Human Services Agency, which provides up-to-date information on the number of coronavirus-related deaths, cases, and hospital patients who have tested positive across the state. His tweet almost immediately caused the Open Data Portal to go down because of a “spike in traffic,” California health officials told Business Insider. The spike occurred at 7:06 p.m. PT, officials said – just one minute after Twitter shows Musk shared the link with his millions of followers.

An hour later, Musk wrote on Twitter that the CHHS site had crashed. “Maybe it has covid,” Musk tweeted.

Musk tweeted the graph in an attempt to support his claim that “hospitals in California have been half empty this whole time.” It showed that there are about 6,500 patients who have tested positive for COVID-19 occupying California hospital beds. There are nearly 75,000 hospital beds across the state.

Musk’s sentiment that the number of coronavirus cases and the strain on hospitals has been exaggerated has been refuted.

Musk tells his Twitter followers he’s selling “almost all” of his physical belongings, and claims that the stock price of Tesla was “too high,” causing Tesla shares to drop sharply. It’s not clear why Musk wants to sell almost all his physical belongings, or where he will live once he “owns no house.”

Musk has previously run afoul of the SEC for tweeting about Tesla shares. He settled an SEC lawsuit last year after tweeting that he was considering taking Tesla private at $US420 per share. As part of the settlement, Musk agreed not to send tweets that could potentially move Tesla’s stock price.