On August 7, the US Space Force announced two winners of a coveted agreement to launch dozens of spy satellites and other classified payloads into orbit.

United Launch Alliance won a 60% share of the future missions, planned for 2022 through 2027, while SpaceX scooped up the remaining 40%. Both companies beat out rivals Blue Origin, founded by Jeff Bezos, and Northrop Grumman for the multibillion-dollar spoils of the agreement, called National Security Space LaunchPhase 2.

But in series of tweets by Elon Musk on Thursday, and following days of silence, the SpaceX founder appeared to be remarkably unhappy with how things turned out.

ULA quickly trumpeted its win with a press release. “ULA is honoured to be selected as one of two launch providers in this procurement,” said Tory Bruno, ULA’s president and CEO.

“This is a groundbreaking day, culminating years of strategic planning and effort by the Department of the Air Force, [National Reconnaissance Office], and our launch service industry partners,” William Roper, the Air Force’s assistant secretary for acquisition, technology, and logistics, said in a press release.

Even Blue Origin and Northrop Grumman told reporters they were “disappointed” in statements.

SpaceX, however, said nothing.

The company has not issued a public statement about its win, which is potentially worth more than $US2 billion, nor did its communications team appear to respond to any requests for comment from niche and national outlets alike. (SpaceX did not acknowledge or respond to questions from Business Insider for this and a prior article about the award.)

That is, until Thursday afternoon – when Musk spoke up by bitterly criticising ULA on Twitter.

Musk: ‘ULA is a complete waste of taxpayer money’ 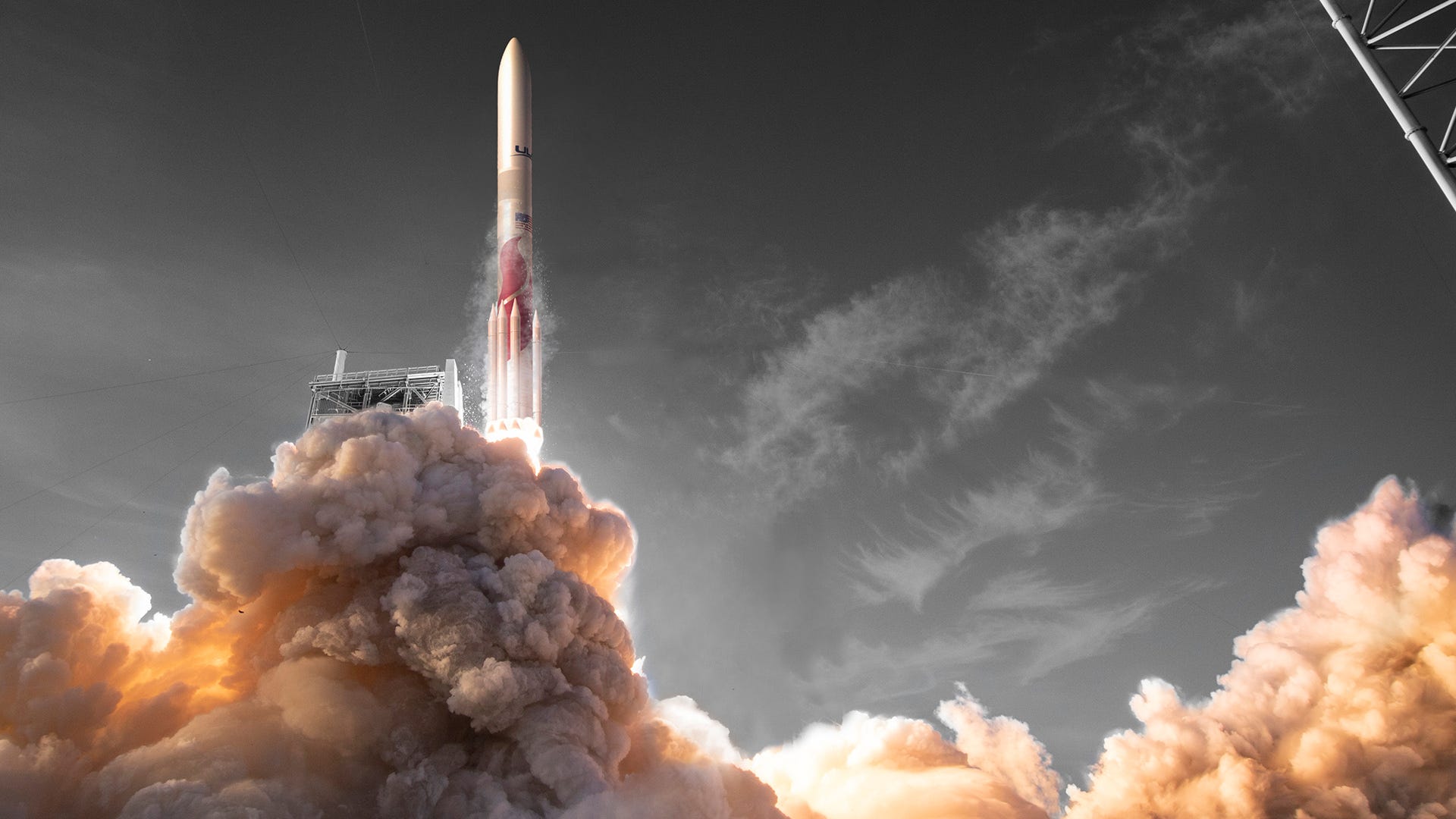 What spurred Musk into speaking up was a tongue-in-cheek tweet by Tim Fernholz, a reporter at Quartz who publishes a weekly newsletter called “Space Business.” In promoting the latest edition, Fernholz poked fun at the evasive culture of the commercial rocket industry.

“Much of this newsletter is sealed to protect the competitive secrets of SpaceX and the other bidders, but redacted filings give us a clue about what Musk and company are upset about,” he said Thursday.

Fernholz then linked to his newsletter’s August 13 edition, which led with this: “We’ve found something Elon won’t tweet about.”

The piece made note of SpaceX’s public absence when it should be “a crowning moment” for the company, given its years of effort to even compete for those government contracts. (Jeff Foust of SpaceNews wrote that SpaceX “joins the establishment” with its new Pentagon award.)

Fernholz speculated about possible reasons why SpaceX would stay mum, ranging from not yet having received a debrief from the DoD on how the contract decisions were made, to the rocket company’s ongoing lawsuit with the US government – a legal protest SpaceX filed for being shut out of a lucrative program to develop its Falcon Heavy rocket system. 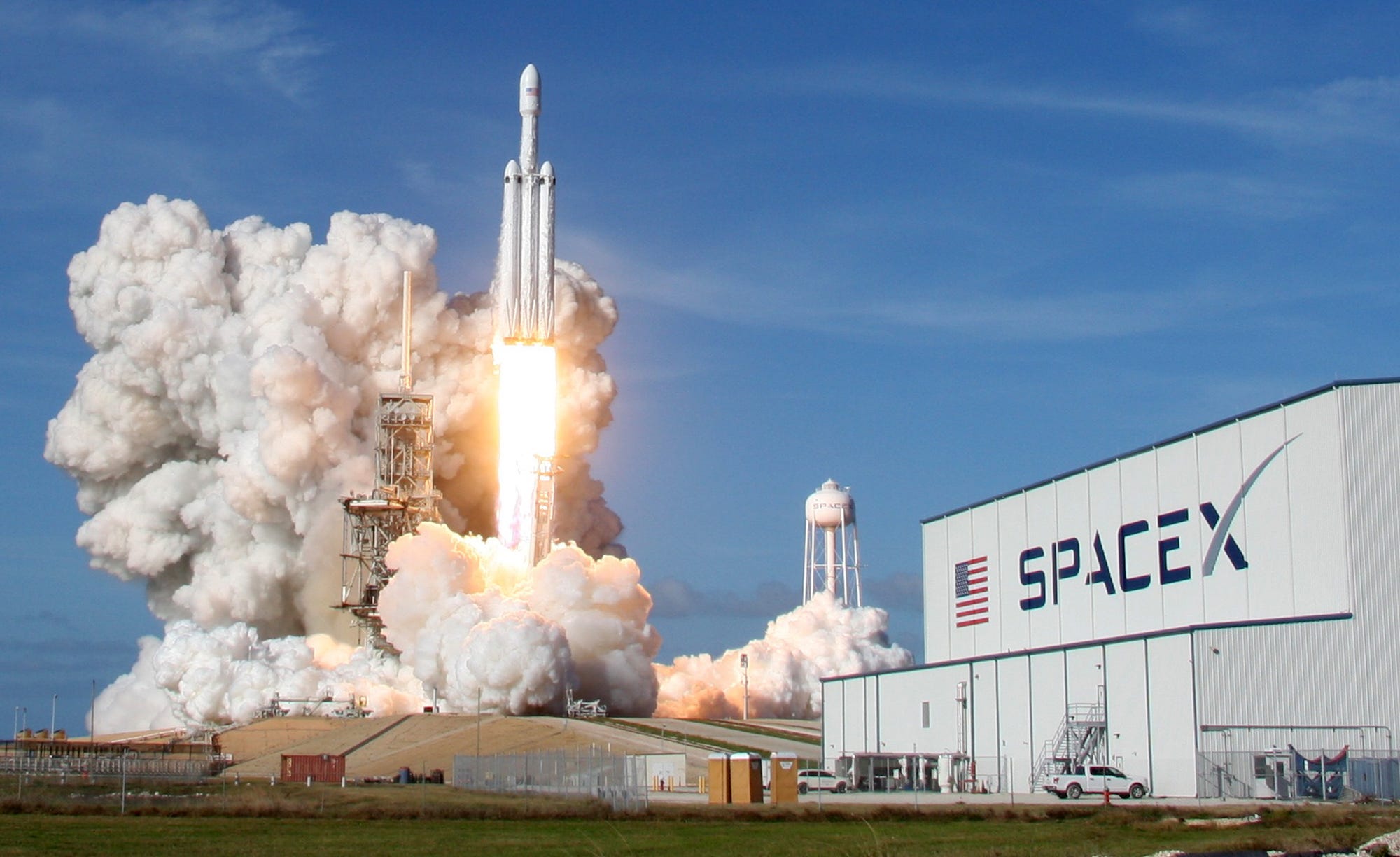 “Efficiently reusable rockets are all that matter for making life multiplanetary & ‘space power,'” Musk tweeted. “Because their rockets are not reusable, it will become obvious over time that ULA is a complete waste of taxpayer money.”

ULA did not immediately respond to requests for comment from Business Insider.

However, Bruno – the company’s CEO – publicly weighed in on the matter a couple of hours after Musk’s criticisms.

“I congratulate @SpaceX on their USAF NSS Phase 2 award,” Bruno said when a user asked how he’d respond to the SpaceX CEO. 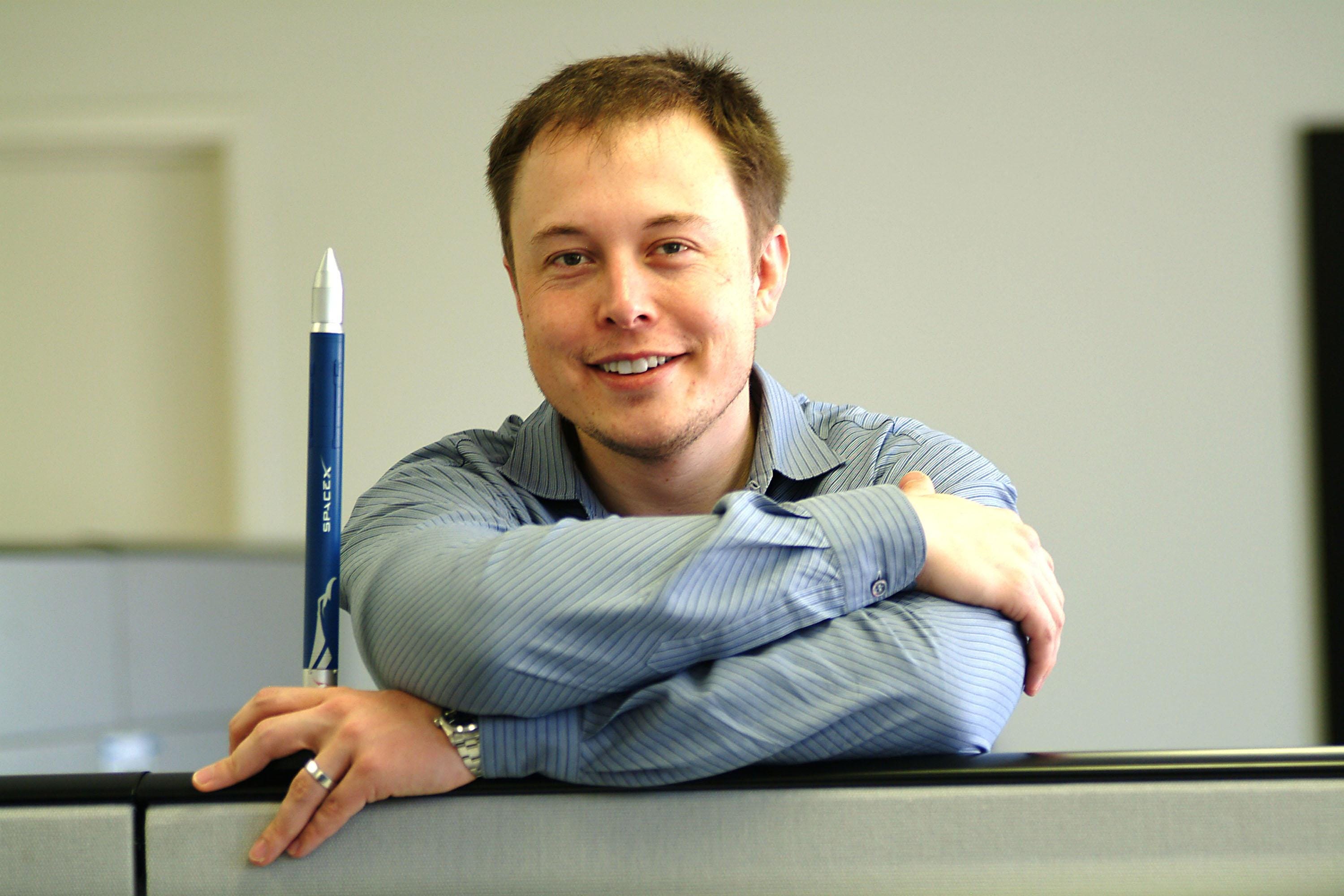 Musk founded SpaceX in 2002. At the time, well-funded and established rocket-industry players like Boeing and Lockheed Martin more or less shrugged.

Yet as SpaceX’s top engineers toiled to build the company’s first rocket system, called Falcon 1, Musk used what tools he could to fight a powerful traditional grip on the industry and break in.

Boeing and Lockheed had won a previous iteration of NSSL, called the Evolved Expendable Launch Vehicle program, and it anointed them as the sole two companies certified to launch military satellites. In part to end an extraordinary racketeering suit in 2005 – Boeing workers were charged with stealing trade secrets from Lockheed, to the tune of 25,000 of them – the two companies decided to merge their rocket-launch businesses into a 50-50 split venture.

SpaceX sued to fight that joining of forces by alleging anticompetitive behaviour. It lost, and ULA was born in 2006, becoming the sole and increasingly expensive launch provider for DoD satellites for years.

Musk’s company pushed forward, though, simultaneously developing a new Falcon 9 rocket to launch commercial and NASA payloads, and a Grasshopper test vehicle. Grasshopper led to self-landing booster technology that was later incorporated into Falcon 9 rockets, which first worked in late 2015 and now saves SpaceX millions of dollars per launch. (It also pushed ULA to evolve its strategy.)

In 2014, SpaceX had numerous Falcon 9 launches under its belt, as well as big NASA contracts and increasing experience. So when Russia began its invasion of Crimea, the company sprang at the chance to sue the Air Force over its use of the Atlas V rocket – a ULA vehicle that relied on sanctioned Russian-made engines.

Musk also publicly attacked the price of ULA’s missions. “This contract is costing the US taxpayers billions of dollars for no reason,” Musk told NPR in May 2014, describing the rockets as “insanely expensive.”

The government settled with SpaceX in 2015, allowing it to compete for defence contracts. But Musk’s distaste for ULA continued, despite sometimes amicable interactions with the company.

In 2018, he assailed ULA’s lucrative launch defence contracts, claiming they are “nutty high” for costing multiple times the projected price of a Falcon Heavy. And when a Twitter user brought up ULA’s upcoming and partly reusable rocket system, called Vulcan-Centaur, Musk said: “I will seriously eat my hat with a side of mustard if that rocket flies a national security spacecraft before 2023.” (“Wow,” Bruno, ULA’s CEO, tweeted in reply.)

On Thursday, Musk again attacked ULA over its traditional Atlas V and Delta IV rockets, which are not reusable and the Air Force plans not to fly after 2022 and 2023, respectively. Musk has repeatedly said either rocket costs more than $US400 million to launch.

“Nobody would suggest buying aeroplanes that only fly once & then crash into the ocean. That would be absurd,” Musk said, later adding: “So why is this madness acceptable for Boeing/Lockheed rockets?” 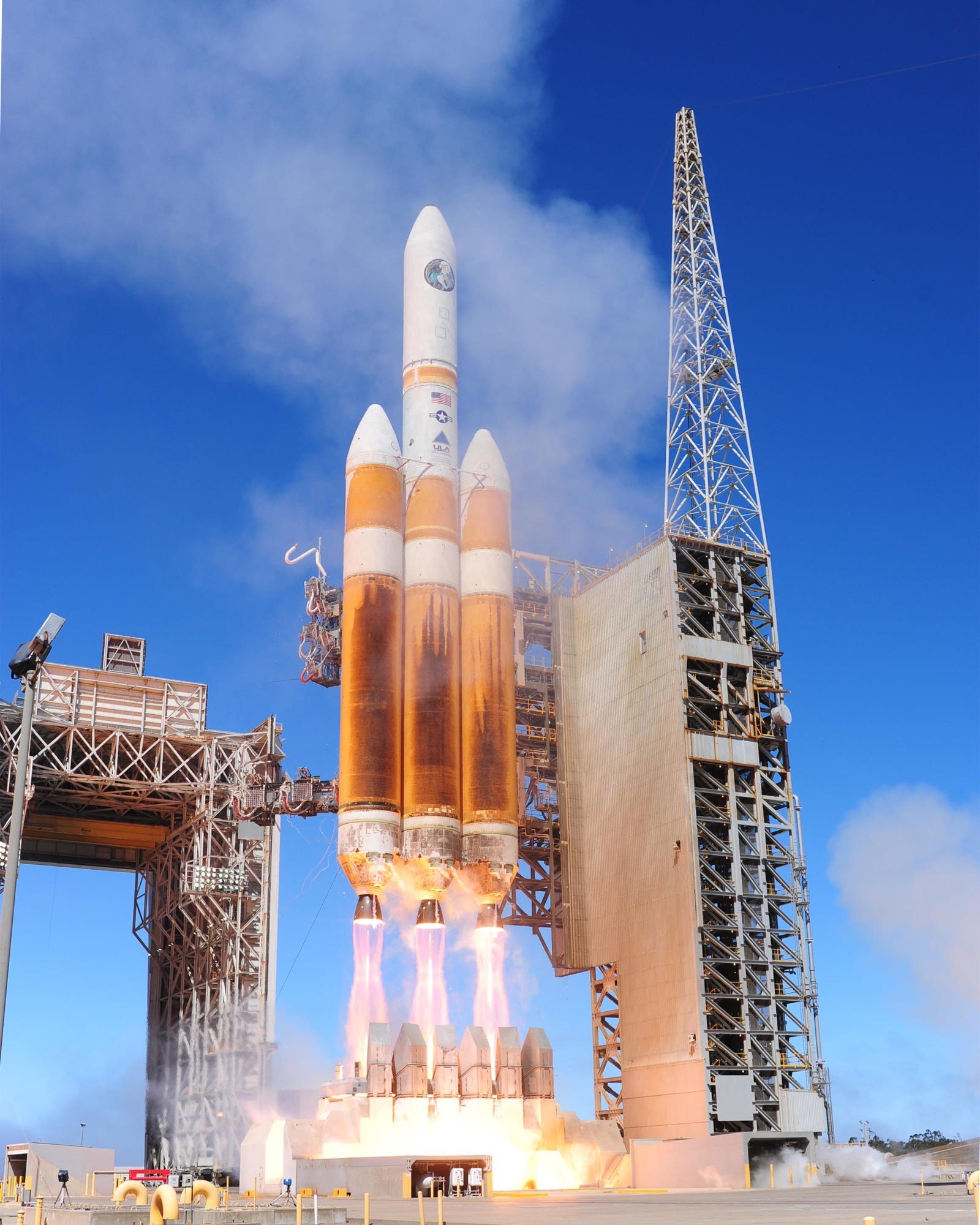 In picking new rockets to get away from the Russian engines and lower its program costs, the DoD said it leaned most heavily on “technical factors” and, to a lesser degree, price and past performance, according to Ars Technica.

The first planned mission for SpaceX, which is slated to launch in late 2022, is priced at about $US316 million. That cost includes a “fixed price Launch Service Support for each company for the first 12 months of the contract,” an Air Force spokesperson told Business Insider in ane email – likely to help cover the cost of a new mobile launch tower gantry.

Meanwhile, ULA’s first two missions will cost about $US169 million each, according to an Air Force press release.

When a Twitter user brought up ULA’s historically higher price point – the company has received many years of launch service support awards – Bruno said: “Check the prices of the first 3, similar missions…”

Each spy satellite can cost a billion dollars or more to build, so a sterling launch record appears to count a lot in divvying up contract awards, too.

ULA has launched 140 space missions in a row without failure, the latest of which was a nuclear-powered Mars rover for NASA. (SpaceX has consecutively launched 61 rockets without losing a payload.) And though the Vulcan-Centaur booster has yet to fly – unlike SpaceX’s Falcon 9 or Falcon Heavy rockets, which have flown three times – variants of the system’s upper-stage Centaur rocket have flown more than 250 times.

“[Defence department customers] don’t care whether [the launch cost] is $US100 million or $US300 million; it’s in the noise,” Alan Stern, a former NASA associate administrator and leader of the New Horizons mission to Pluto, told Air & Space magazine in 2012. “What they want is a guarantee it’s going to work.”

The DoD’s calculus has evolved since then to more strongly emphasis affordability, but reliability – perceived or otherwise – still appears to be king.

The Air Force led the procurement process and is preparing for protests to the agreement by Blue Origin and Northrop Grumman, according to SpaceNews. Based on SpaceX’s silence and Musk’s public acridity, though, the government may need to prepare to handle a third complaint from one of the winners.