Elizabeth Olsen is so much more than “the third Olsen sister.”

Two years younger than her child star twin sisters Mary-Kate and Ashley, Elizabeth — also known as Lizzie — shied away from the spotlight as a kid. But during the Sundance Film Festival in 2011, the indie darling burst onto the scene and clinched the hearts of critics.

Next month, Olsen joins the superstar cast of “Avengers: Age of Ultron,” as the mysterious, reality-bending sorceress Scarlet Witch. We decided to take a look back at the actress’ meteoric rise to fame.

Growing up, Elizabeth Olsen thought her life was totally normal. Her family of five lived in the affluent LA suburb of Sherman Oaks, where she danced ballet, watched movies, and hung out on set of her twin sisters' TV show. Mary-Kate and Ashley Olsen, two years older than little sister 'Lizzie,' shared the role of Michelle Tanner on the 90s family sitcom, 'Full House.' The show aired for eight seasons, and launched the girls into child-stardom. Olsen's earliest IMDb credits are cameos in her sisters' direct-to-video movies. In this scene from 'The Adventures of Mary-Kate & Ashley: The Case of Thorn Mansion,' Mary-Kate and Ashley tell her she's too young to join in their detective work. She tagged along on celebrity cruises that included meet-and-greets with her sisters. When a fan asked how do you tell the twins apart, she replied, 'Ashley has the dot and Mary-Kate doesn't,' indicating a small freckle above Ashley's upper lip. 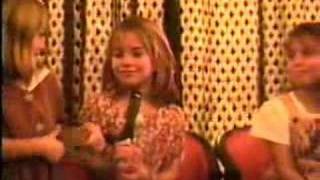 'All of our family vacations were somehow involved or tied to my sisters' working,' Olsen says. 'It wasn't until a few years ago that I realised how hard that must have been for them.' The spotlight never appealed to Olsen in the same way. Over and over, she watched and rehearsed scenes from her favourite musicals, including 'Guys and Dolls' and 'Grease,' and noticed very few kids in them. She decided to be an adult actor rather than a child star. As a student at private school in Beverly Hills, Olsen surrounded herself with 'super-creative kids,' whose families happened to have floor seats for Lakers games. She succeeded in volleyball, and dreamed of attending college on athletic scholarship. In 2004, Mary-Kate's battle with an eating disorder became tabloid fodder. '(The media) would follow us shopping and (Mary-Kate and Ashley) would almost get into car accidents because of the paparazzi,' Elizabeth Olsen says. 'I just thought, 'This is such bulls---.'' A high school teacher lured her into the academic world of theatre. She studied its history and playwrights. 'I just always thought that theatre was different from being an actor in Hollywood,' Olsen says. 'It was like this safe place where people aren't harassed.' Around this time, Mary-Kate and Ashley launched a clothing line inspired by their siblings. 'Elizabeth and James' balances Elizabeth's 'uptown sophistication and (femininity)' with their brother James' 'laid back, downtown edge.' The theatre major booked gigs as an understudy in off-Broadway shows, but was never called to duty. She says she wrote school papers on her laptop backstage. A Hollywood agent spotted Olsen's name on a playbill and reached out. In little more than a year, she secured leading roles in five movies, all independent films. 'Peace, Love & Misunderstanding,' featuring Jane Fonda, was a critical disaster. But by the time Olsen left the 2011 Sundance Film Festival, she transformed from 'the third Olsen sister' to breakout indie-actress of the year. Two of her films premiered ... Horror flick 'Silent House' tells the story of a young woman trapped inside her family's lake house, haunted by a supernatural force that won't let her leave. The movie looks like a single tracking shot, and shows Olsen in every frame. 'Martha Marcy May Marlene,' however, positioned Olsen as the festival's 'It Girl.' The psychological thriller follows an escaped cult member, haunted by memories of abuse and paranoia, who struggles to re-assimilate into normal life. Olsen's subdued performance showed maturity and restraint beyond her 22 years. 'She could tell a lot with her eyes without trying hard,' director Sean Durkin says. Olsen says no job has ever been handed to her because of her family ties. 'I have to (prove) I've earned my jobs, I'm OK with that,' Olsen says. 'I'm in it for a ride, and I'm in it for the long run.' Olsen and Aaron Taylor-Johnson, who played her on-screen husband in 'Godzilla,' will reunite as superhero-siblings in the highly anticipated 'Avengers: Age of Ultron.' Their characters, Scarlet Witch and Quicksilver, are new to the film franchise. Although Scarlet Witch is a well-established character in the Marvel universe, Olsen and director Joss Whedon had to rewrite her origin story for the movie. Twentieth Century Fox, maker of the 'X-Men' franchise, owns the film rights to her backstory. While the specifics of Scarlet Witch's abilities remain hazy, a post-credits scene in 'Captain America: Winter Soldier' revealed that she is telekinetic. Olsen spilled that the 'messed-up' sorceress can 'communicate with paranormal things,' and Whedon confirmed she can 'weave spells' and 'get inside your head.' Olsen read decades worth of comics for role research. 'I just love Scarlet Witch,' Olsen says. 'It's so funny because I'm often (playing) these psychologically damaged people, but when you talk about Scarlet Witch ... She has more s--- to deal with than anybody else I know.' You can catch Olsen and the rest of the 'Avengers' crew on May 1 in theatres.