A pilot told us about the common misconceptions about flying, distress calls, the black box, and auto-pilot No further details about what happened have been delivered yet as the airline is currently assembling a search and rescue team.

However questions will naturally circle about what led to the incident and how after apparently reaching an elevation of 37,000 feet, it disappeared from radar.

Business Insider spoke to a British private pilot (who wanted to remain nameless) about the general misconceptions about flying an aircraft, distress calls, the black box, and auto-pilot.

Business Insider: What are the common misconceptions about pilots flying planes?

Pilot: Of course the principal thing to remember is that flying is very safe. Obviously there are statistics out there, but more often than not, the people who need convincing of this fact aren’t going to be swayed by statistics.

There are many people who feel as though the “wings might fall off” or that if the engines fail, it’s all over — but this simply isn’t the case.

Even an aeroplane without power will glide for a very long time very easily. Perhaps one of the best known examples is an aeroplane whose fuel leaked out over the Atlantic Ocean, depriving it of both engine power and electricity. The captain — also a glider pilot in his spare time —  landed the aircraft safely in the Azores with only his extremely basic backup instruments.

BI: So what do pilots do when they are in the air?

P: It’s important to remember that there’s a lot to do. Actually flying the aircraft is just a small part of what a pilot does.

Modern automation has taken a lot of the hard work out of these tasks and undoubtedly can do a much better and more accurate job of it than a human could but of course this necessitates a change in how a modern pilot does their job — it’s often said that a Captain or First Officer is less a “pilot” and more a “systems manager” and that’s probably true for the times when everything goes to plan.

A modern pilot truly earns their pay, though, when things don’t go to plan and there’s no automated substitute for experience and intuition and modern training reflects this.

BI: So is automation / auto-pilot a bad thing?

P: Perhaps another misconception is that automation is inherently a bad thing — it’s demonstrably not.

Without a doubt it’s taken some of the romance and mysticism out of flying aeroplanes but in the modern day, the world needs safe and reliable transport solutions and delegating tough and complex tasks to dedicated machinery is a necessary part of that.

The danger comes when pilots allow their core, “hand flying” skills atrophy after many thousands of hours of uneventful automatic flying and these skills let them down when they’re most needed — in the stress of a system failure.

Naturally, pilots are required to undergo modern, rigorous and continuous training throughout their careers to stymie this, but a few recent examples of air accidents [AF447, Asiana 214] illustrate that more can always be done.

Finally it’s worth noting that aviation practice, procedure and law is always evolving to become safer and more efficient. We don’t operate in the same environment as 1950s — or even 1980s — aviators.

Many refinements and improvements are a direct result of air disaster investigations (and it’s comforting to know that some good usually comes from a disaster). For example, the specialist language that pilots and air traffic controllers use is constantly becoming less ambiguous and easier for aviators to interpret.

Controllers and pilots never use the phrase “take off” until the exact moment they’re required to actually start their takeoff sequence as a direct result of the world’s worst aviation accident when two jumbo jets in thick fog believed they could use the same runway at the same time, to name one example.

BI: What are the most common problems that aircrafts can incur if the weather is fine?

P: Commercial, passenger operations are required to operate under all weather conditions and, as such, operate principally using instruments and navigation techniques that do not require good weather.

Therefore, even in good weather, commercial pilots will be flying using their instruments (for example, their “artificial horizon”), on-board GPS-like navigation systems, ground-based navigational radio beacons and relying on air traffic control’s radar and instructions to keep clear of other aircraft.

Naturally it’s possible to become over-reliant on these systems and problems can ensue if an overly-reliant pilot has to do without a missing part of this puzzle, even when that part isn’t required.

A recent example is that of a flight whose pilot was so dependant on a ground-based radio landing aid that, when the aid was offline for maintenance in perfect weather with an unhindered view of the runway, they crashed a perfectly fully-functional modern aeroplane just short of the runway edge.

One could argue that in such cases (and in other cases where a fully functional aeroplane is mishandled [AirFrance 447], the airline’s training regime should focus less on automation and more on basic “hand-flying.”

BI: How much is auto-pilot used when flying?

P: For commercial operations, it varies depending on the operator’s standard operating procedures and culture, the individual pilot’s particular tastes, the weather, and how much automation is available.

At one end of the scale, some operators insist that their flight crews use automation from the earliest possible moment (seconds after takeoff) until the latest possible moment, late into the landing sequence and occasionally right down to the runway surface.

At the other end, a flight might be hand-flown for the entire duration (not uncommon if the flight isn’t too long and if the pilot feels like it) or hand-flown during takeoff, climb, and well into the cruise phase as well as the descent and landing phase, with the automated systems handling the majority of the cruise (obviously most common during long-haul flights).

For example, this was posted by a pilot on Reddit with the caption: “Want to know how it feels to fly an airliner? Stare at this picture for about two hours while slowly consuming three cups of coffee“: 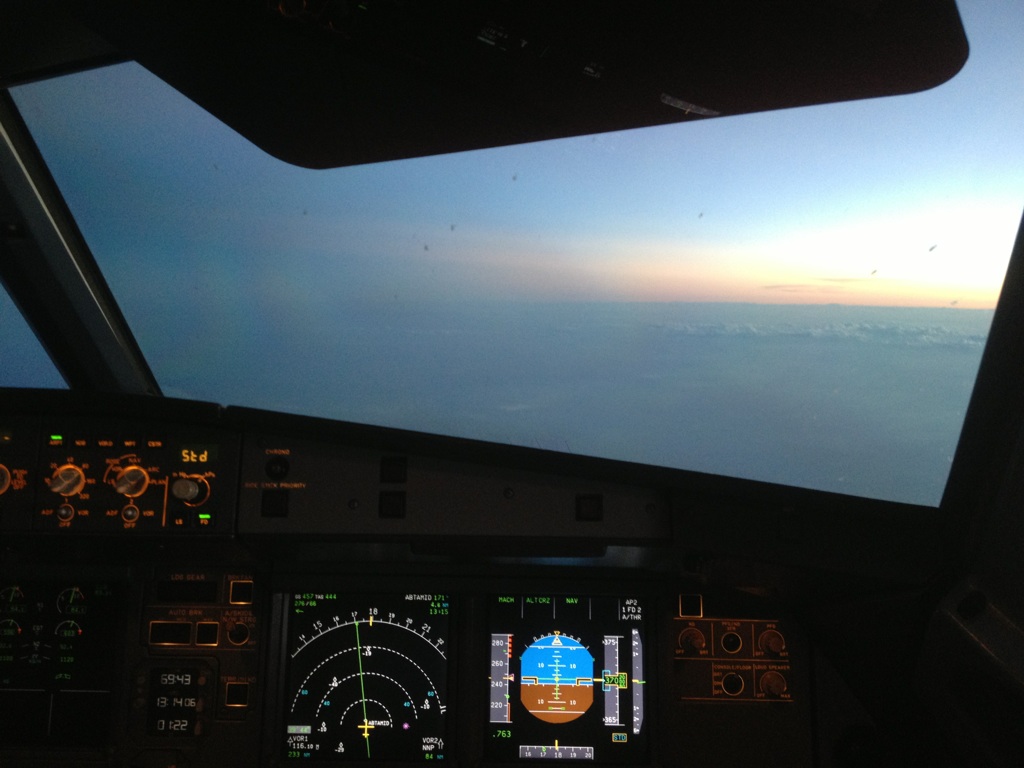 Hand-flying, especially during the descent and landing phases (when flight crew workload is already at its highest) is especially taxing during bad weather and it’s likely that automation will be used to the maximum possible extent at this stage.

It’s a sure bet, though, that any flight travelling in a straight line while high up is using its auto-pilot.

For private operations in small aircraft, very little. Most light aircraft aren’t equipped with automation and must be flown literally hands-on at all time in a constant balancing act. The larger, newer or more expensive light aircraft are as fully-equipped as a modern jetliner, though, which has obvious appeal if you wish to fly for a long distance and/or in bad weather.

BI: How does this have an impact during a crisis?

P: It depends on the nature of the crisis. Sometimes it’s a boon because it allows a pilot to devote more attention to troubleshooting and in other occasions it gets in the way.

In most cases, however, the autopilot is designed to disconnect itself if any non-standard situations develop and require the flight crew to hand-fly the aircraft.

German-operated A320s do not crash in the cruise. Not these days. This one is weird. #Germanwings
— David Learmount (@DavidLearmount) March 24, 2015

BI: When a plane sends a distress call, what can ground staff do to help an aircraft safely land?

P: Not a great deal. Any pilot will tell you that they have a mantra drummed into them: “aviate, navigate, communicate,” and this reflects the priorities of any pilot’s tasks. The absolutely most critical task for any pilot is to “fly the aircraft.”

This is why it’s not unusual for emergencies to happen without any distress call being received. The flight crews are likely too busy flying and/or troubleshooting and it’s recognised that a radio distress call will achieve very little besides perhaps giving navigational assistance to a suitable nearby landing spot.

Obviously it helps to have emergency crews on standby for when you do land. But first you have to land (or fix the aircraft) and absolutely nobody on the ground can help you with that.

Typically, upon an aircraft declaring itself in a distress, an air traffic controller will:

(a) Assist the flight crew with finding a landing site.

(b) Clear any other traffic out of the way of the aircraft in distress.

(c) Notify the emergency services. It’s not unheard of for an air traffic control unit to also dispatch or divert a nearby, available aircraft to the location of any aircraft in distress (or, at worse, a suspected crash site).

BI: What are the common misconceptions about the black box?

(a) not indestructible — they’re designed to withstand significant hardships, violence and temperatures but a prolonged fuel fire can and will render any data on them unreadable.

(b) not infinite — some recorders only capture the last few hours of a flight, some the last few minutes – which may not help if any accident sequence is prolonged (like if, for example, whatever doomed MH370 happened early but it flew on for hours).

(c) not infallible — on very rare occasions, following an accident, it’s been found that the accident flight has not been recorded at all due to an undetected failure on a much earlier flight.

(d) occasionally not easy to find if, for example, an accident aircraft breaks up in mid-air and distributes wreckage over a very large area and of course, as many people know, their automatically-activated underwater sonar “pingers” expire after a month or so.

It is, however, the single best tool in an accident investigator’s box and even the cockpit voice recorder can yield a wealth of data on, for example, engine performance and flight conditions beyond simply recording the pilot’s voices based on the noise in the cockpit.