The Weekly Leading Index (WLI) growth indicator of the Economic Cycle Research Institute (ECRI) posted -7.5 in its latest reading, data through January 13. The latest public data point is a reduced contraction from last week’s -8.6, and the underlying WLI rose from an adjusted 121.1 to 123.4 (see the third chart below). The growth index had slipped lower over the past two weeks, but the latest data point is the highest (i.e., least negative) since early September.

Early last December Lakshman Achuthan, the Co-founder of ECRI, spoke with Tom Keene on Bloomberg Television’s Surveillance Midday. You can watch the video on the ECRI website here, with bold heading Recession Update. The eight-minute video is well worth watching in its entirely. I’ve posted this link continuously since my December 9th weekly update because ECRI continues to feature it as the lead on its website.

As I continue to emphasise, ECRI’s recession call remains quite controversial in financial circles. The perma-bears are generally supportive of the forecast, while the predominantly bullish mainstream financial view ranges from highly sceptical to dismissive. The bullish view was supported in late December by the latest Conference Board Leading Economic Index update. One of the Board’s economists forecast “continued growth this winter, possibly even gaining momentum by spring” (more here). However, the Conference Board released a working paper on December 20th (here) that discusses a major revision of its LEI that will significantly lower its optimistic reading.

For a fascinating analysis of the ECRI WLI, see these fascinating articles by Dwaine van Vuuren, CEO of PowerStocks Investment Research:

Earlier today Dwaine sent me the chart below, which should be studied in the context of his January 17 article:

For another perspective on Dwaine’s indicator research, see the latest commentary from John Hussman in Dwelling In Uncertainty (January 16).

On September 30th, ECRI publicly announced that the U.S. is tipping into a recession, a call the Institute had announced to its private clients on September 21st. Here is an excerpt from the announcement:

Early last week, ECRI notified clients that the U.S. economy is indeed tipping into a new recession. And there’s nothing that policy makers can do to head it off.

ECRI’s recession call isn’t based on just one or two leading indexes, but on dozens of specialised leading indexes, including the U.S. Long Leading Index, which was the first to turn down — before the Arab Spring and Japanese earthquake — to be followed by downturns in the Weekly Leading Index and other shorter-leading indexes. In fact, the most reliable forward-looking indicators are now collectively behaving as they did on the cusp of full-blown recessions, not “soft landings.” (Read the report here.)

For a close look at this movement of this index in recent months, here’s a snapshot of the data since 2000.

Now let’s step back and examine the complete series available to the public, which dates from 1967. ECRI’s WLI growth metric has had a respectable record for forecasting recessions and rebounds therefrom. The next chart shows the correlation between the WLI, GDP and recessions.

A significant decline in the WLI has been a leading indicator for six of the seven recessions since the 1960s. It lagged one recession (1981-1982) by nine weeks. The WLI did turned negative 17 times when no recession followed, but 14 of those declines were only slightly negative (-0.1 to -2.4) and most of them reversed after relatively brief periods.

The third significant negative came near the bottom of the bear market of 2000-2002, about nine months after the brief recession of 2001. At the time, the WLI seemed to be signaling a double-dip recession, but the economy and market accelerated in tandem in the spring of 2003, and a recession was avoided.

The question had been whether the WLI decline that began in Q4 of 2009 was a leading indicator of a recession. The published index has never dropped to the -11.0 level in July 2010 without the onset of a recession. The deepest decline without a recession onset was in the Crash of 1987, when the index slipped to -6.8. ECRI’s managing director correctly predicted that we would avoid a double dip. The nine quarters of positive GDP since the end of the last recession supports ECRI’s stance.

The Certainty and Dramatic Language of ECRI’s New Recession Call

What is particularly striking about ECRI’s current recession call is the fervor and certainty of the language in the public press release:

Here’s what ECRI’s recession call really says: if you think this is a bad economy, you haven’t seen anything yet. And that has profound implications for both Main Street and Wall Street.

I continue to be astonished at the complete absence of wiggle room in the announcement, nor have there been any public communications from ECRI to qualify or soften its recession call. ECRI has put its credibility on the line. As I’ve said before, if the U.S. avoids a recession, ECRI’s reputation will be permanently damaged.

A Look at the Underlying index

With the Growth Index showing so little change over the past seven weeks, let’s take a moment to look at the underlying Weekly Leading Index from which the Growth Index is calculated. The first chart below shows the index level.

For a better understanding of the relationship of the WLI level to recessions, the next chart shows the data series in terms of the per cent of the previous peak. In other words, a new weekly high registers at 100%, with subsequent declines plotted accordingly.

As the second chart illustrates, only once has a recession occurred without the index level achieving a new high — the two recessions in the early 1980s, commonly referred to as a “double-dip” recession. Our current level is 14.1% off the most recent high, which was set 4.6 years ago. The longest stretch between highs was about 5.2 years from February 1973 to April 1978. But in index level rose steadily from the trough at the end of the 1973-1975 recession to reach its new high in 1978. The pattern we’re now witnessing is quite different.

Even with the downward revision from 2.5% to 2.0% to 1.8% for the third estimate of Q3 GDP, many will see the positive Q3 GDP as a repudiation of ECRI’s recession call. ECRI itself did not offer a specific date for the start of the forecast recession. A general view is that ECRI’s headlights shine about six months into the future, which would make Q1 2012 GDP the critical number for evaluating ECRI’s stance. Meanwhile, we’ll get our first peek at Q4 2011 GDP next Friday, two hours before the latest public ECRI data is posted.

The U.S. has had eleven recessions since the earliest quarterly GDP calculations, which began in 1948. In the month declared by the National Bureau of Economic Research (NBER) as the beginning of the recession, quarterly GDP for that month has only been negative four times.

ECRI doesn’t provide the general public with the analytical details behind its calls, but the Hoisington Investment Management Q4 Report supports a similar recession call with an extended economic analysis that includes several key topics:

For some additional perspective on ECRI indicators and the apparent conflict between its recession call and the Conference Board’s Index of Leading Economic Indicators, see my commentary The Great Leading Indicator Smackdown.

For another take on the controversial topic of recession calls, see also the interesting article by Jeff Miller, Why the Average Investor Is Bamboozled by Recession Forecasts (January 18).

Note from dshort: ECRI’s weekly Excel spreadsheet includes the WLI and the Growth series, but the latter is a series of values without the underlying calculations. Earlier this month Franz Lischka, CFA, an asset management advisor at Valida Vorsorge Management, of one of the largest Austrian pension funds, shared with me his efforts to identify the maths behind Growth Index. A subsequently exchange of emails with Georg Vrba, a Civil and Structural Engineer, and Dwaine van Vuuren refined the formula:

The formula doesn’t exactly match the ECRI’s Growth Index, but it has a correlation of 1.0 and an average deviation of 0.0026 from the published data series. 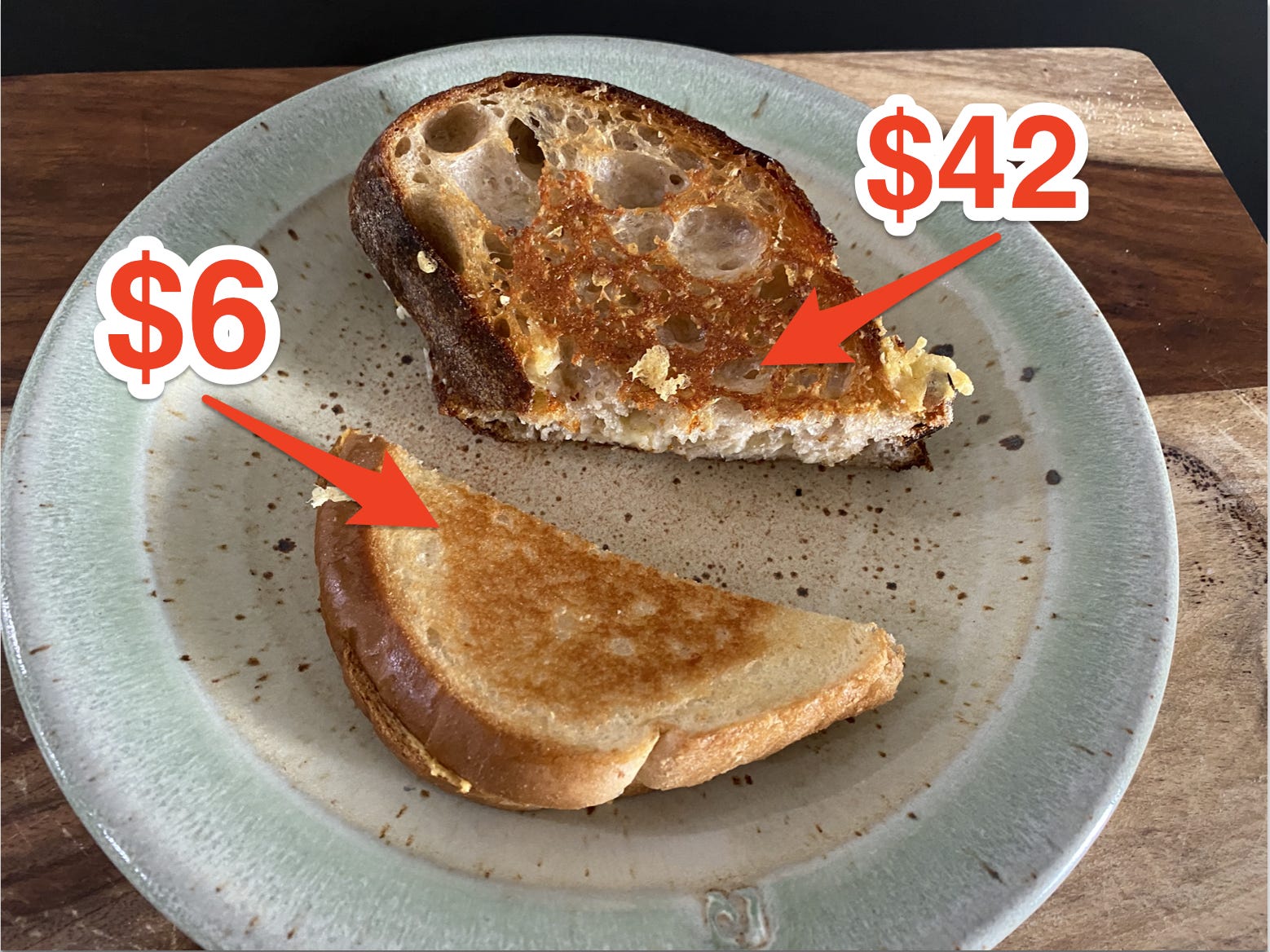