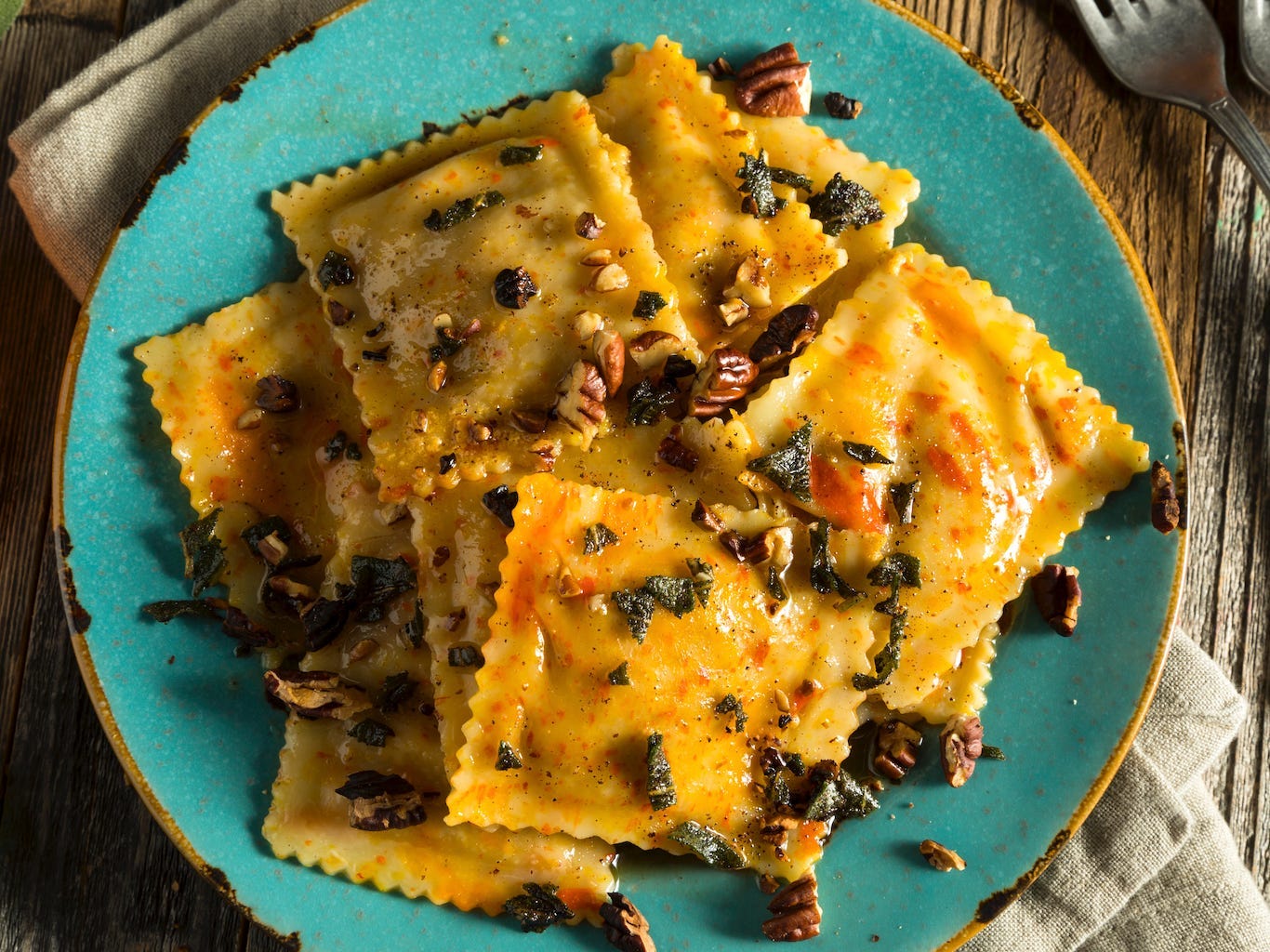 Bhofack2/Getty ImagesInsider asked Michelin-starred chefs to share the recipes for their favourite Thanksgiving side dishes.

The holidays are almost here, which means it’s nearly time for the best part of Thanksgiving dinner â€” the side dishes.

To help you finalise your menu, Insider asked Michelin-starred chefs to share the sides that they always whip up at home for Thanksgiving dinner â€” plus their tips and tricks so you can re-create them.

From classics like cranberry sauce and Brussels sprouts to original twists on ravioli and roasted potatoes, these dishes will definitely make your holiday feast one to remember.

Carrots vichy will add a sweet spin to your usual Thanksgiving veggies. 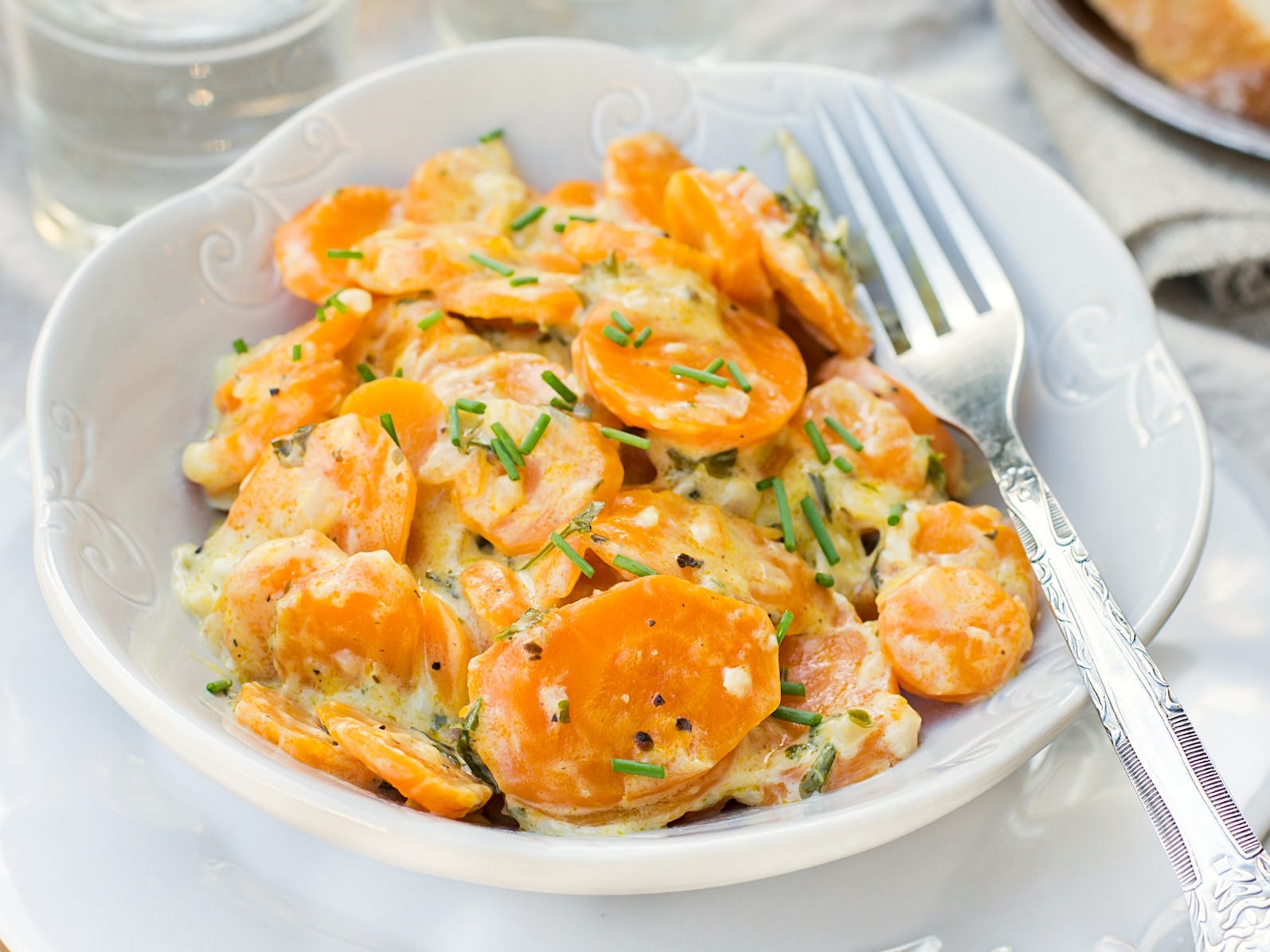 Gerald Addison, who recently opened Bammy’s in Washington, DC, told Insider that this traditional French dish is always “so reminiscent of holiday things for me.”

Better yet? It only requires four ingredients.

First melt some brown sugar with your butter, then add your sliced carrots so that they can caramelize. Once that’s done, just add some parsley right on top.

“It’s probably more butter than carrots, but it’s sweet and delicious and goes well with turkey,” Addison said. “It’s great on its own too, it’s like adult candy.”

Upgrade your stuffing by adding clams and oysters to the mix. 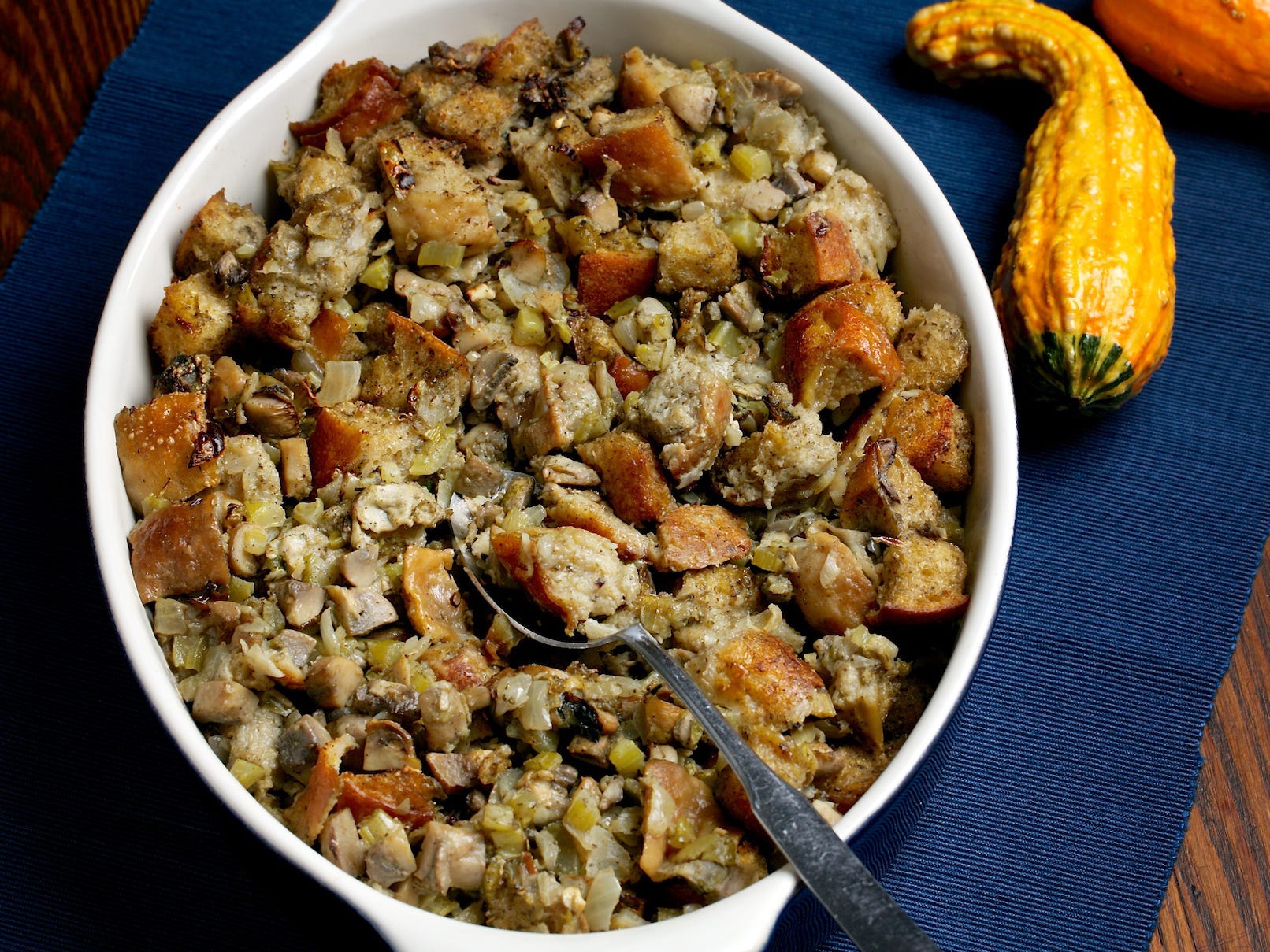 The Washington Post/Contributor/Getty ImagesChesapeake oyster stuffing is one of Chef Chris Morgan’s ‘favourite things on the planet.’

“Chesapeake oyster stuffing is one of my favourite things on the planet,” Chris Morgan, who runs Bammy’s with Addison, told Insider.

Morgan begins the dish by lightly cooking sausage, often opting for andouille because “it’s smoky and I like how it plays off the oysters and clams,” he said.

He then slowly starts adding onions and garlic, letting them sweat before throwing in the chopped clams and oysters.

Deglaze them with a little white wine, then add your breadcrumbs, paprika, and parsley.

“Take it off the heat and slowly add your egg,” Morgan said. “Bake that at 350 degrees Fahrenheit for 20 minutes or so until it’s set, and it’s phenomenal. I love to eat that with my turkey or on its own.”

“I personally love to cover it in hot sauce,” he added. “But it’s one of those things I look forward to making every year.”

Cranberry sauce is a Thanksgiving classic, and for good reason. 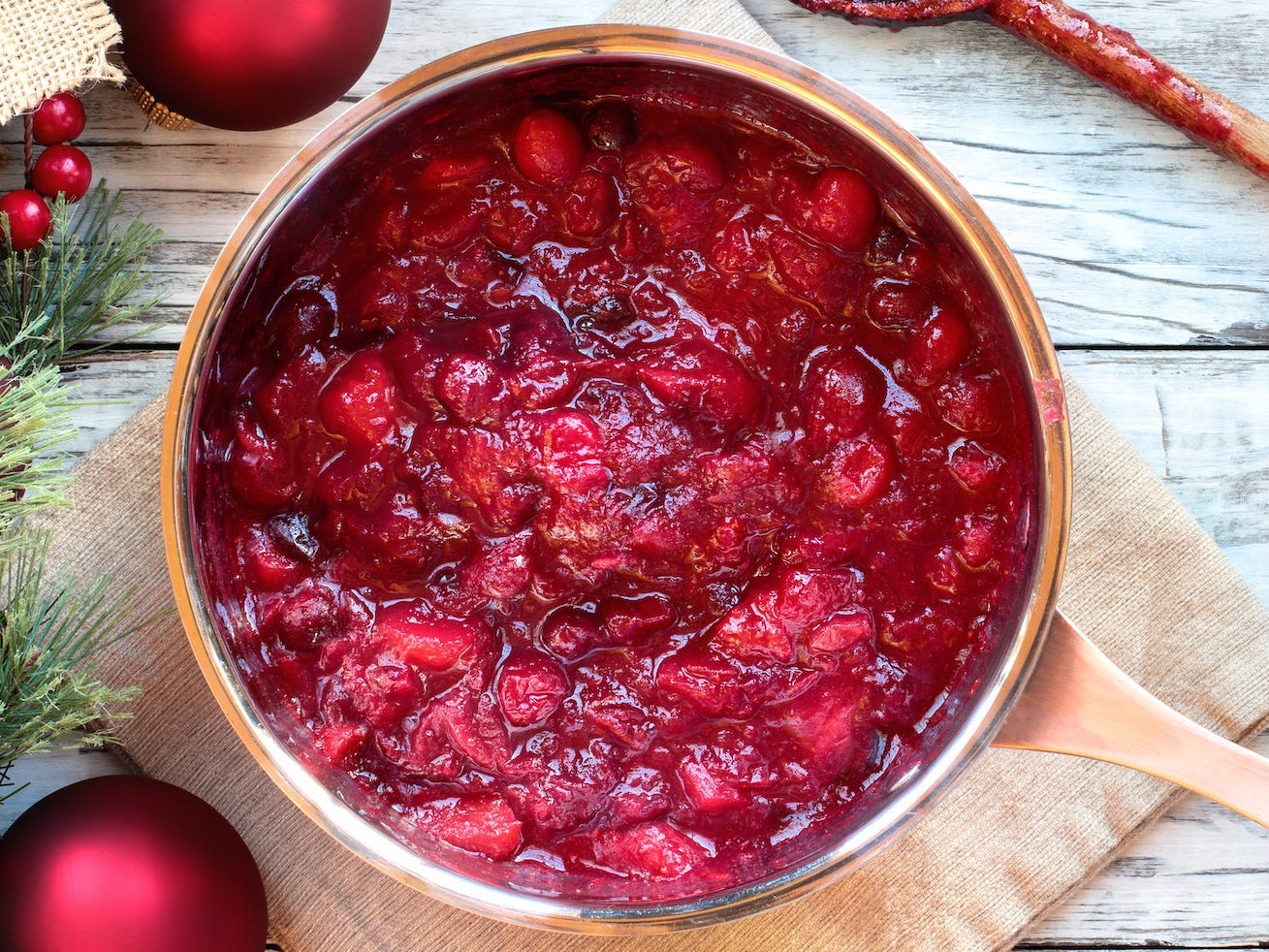 Val Cantu, the head chef at Californios in San Francisco, told Insider that he loves to “go over the top” when he makes his homemade cranberry sauce for the holidays.

“Usually I’ll steep the cranberries with orange juice, maybe a little brown sugar, and let that cook for a while,” he said. “The cranberries put off a lot of liquid, so I’ll purée that and pass it through the strainer, basically until it’s the same consistency as my gravy.”

Then Cantu adds a little agave syrup, plus the “tiniest pinch of salt,” and voila! It’s almost as easy as opening up the canned version.

And you can’t have a turkey dinner without gravy to drizzle over everything. 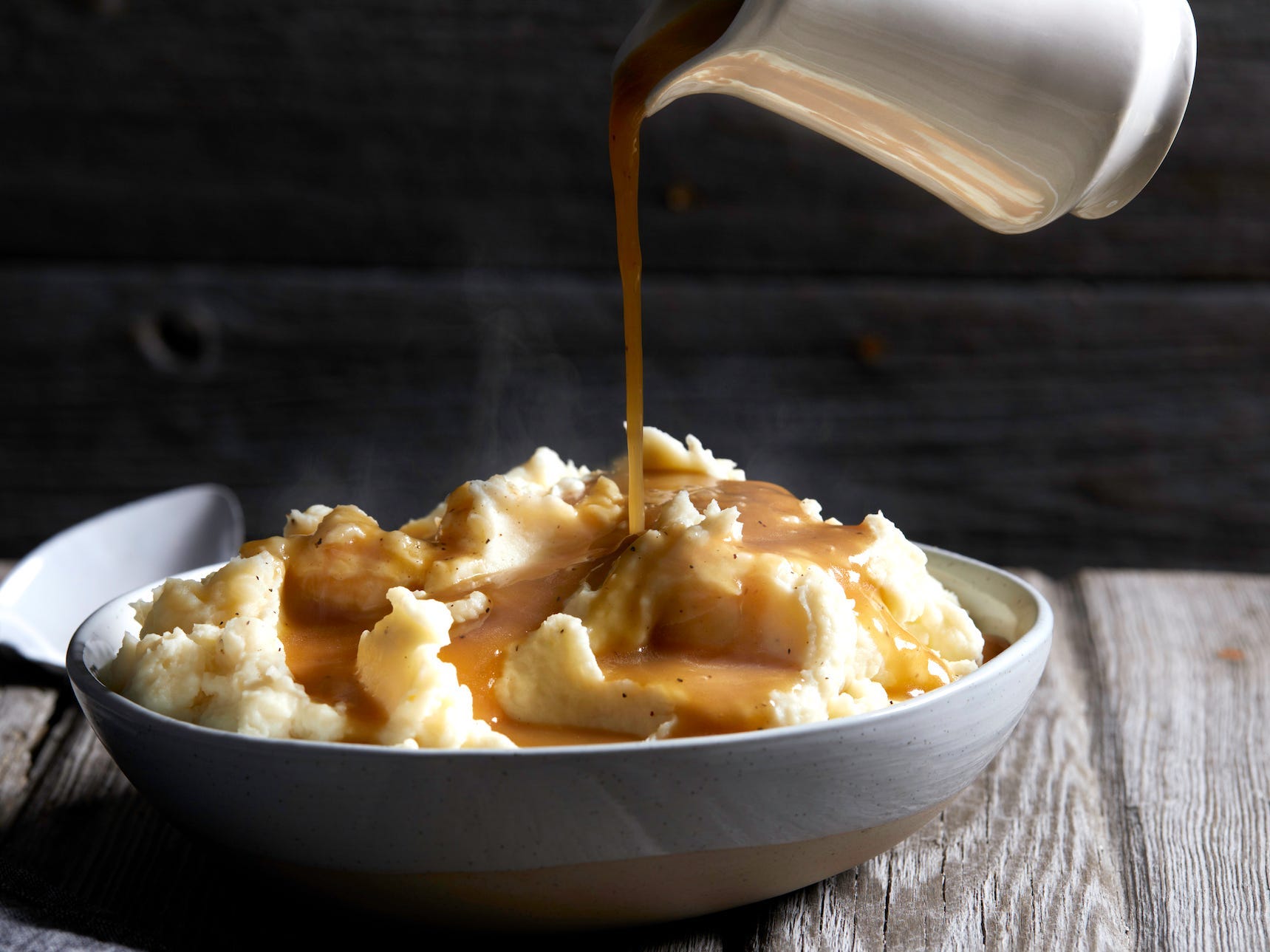 Ryan Benyi Photography/Getty ImagesCantu makes a stock from the spare parts of his turkey for Thanksgiving gravy.

Cantu said he’s always on gravy duty when it comes to Thanksgiving dinner at his house.

The California chef makes a stock from the spare parts of his turkey, including the neck and wings.

“I think it’s also really important to add more chicken stock, and use that to really fortify it and make a dark brick roux,” he said, referring to the mixture of fat (usually butter) and flour used to thicken sauces. “And add lemon juice and chives to brighten the gravy up and make it a bit fresher.”

Give your roasted sweet potatoes some kick by topping them with a maple-chilli glaze. 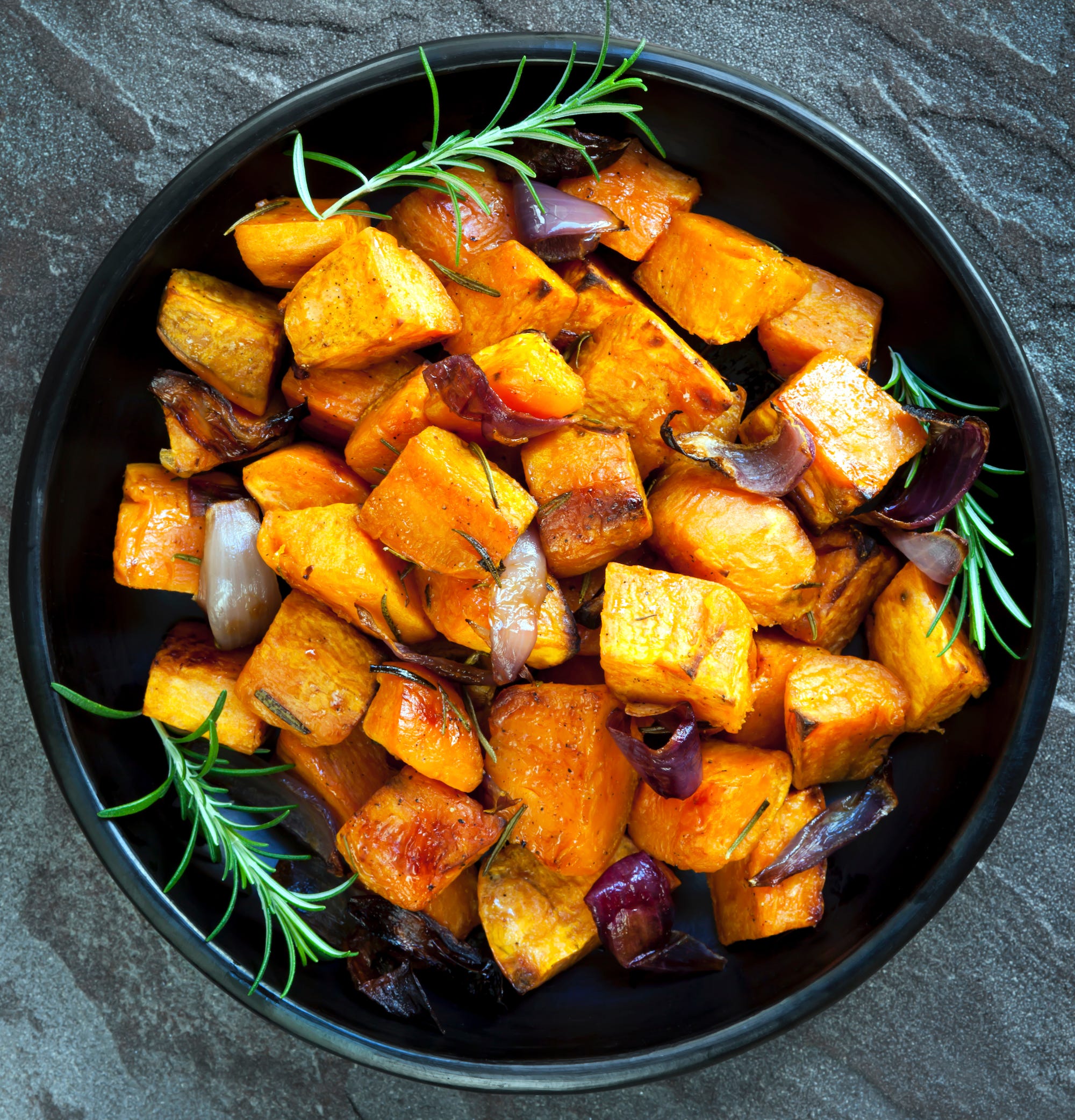 Mazen Mustafa, executive chef at the newly-opened Fellow in Los Angeles, told Insider that this dish is “a fan-favourite every holiday season.”

First preheat your oven to 350 degrees Fahrenheit. Then season your sweet potatoes with olive oil plus some salt and pepper in a large mixing bowl.

Place your potatoes on a baking sheet and pop them in the oven. Then get started on the sauce, adding your garlic, sliced shallots, diced ginger, and sliced Fresno chillis to a pan. Cook them in olive oil over very low heat (a technique known as “sweating”).

Add maple syrup and let the mixture simmer for three to five minutes until it’s reduced by 30%.

Once your sweet potatoes are tender, take them out of the oven and toss them in your dressing. Mustafa also recommends serving them in a warm bowl.

“I love the way the sweetness of the maple and the mild fruity spice from the Fresno chilli go with the earthiness of the sweet potato,” he said. “It just makes for a magical pairing.” \ 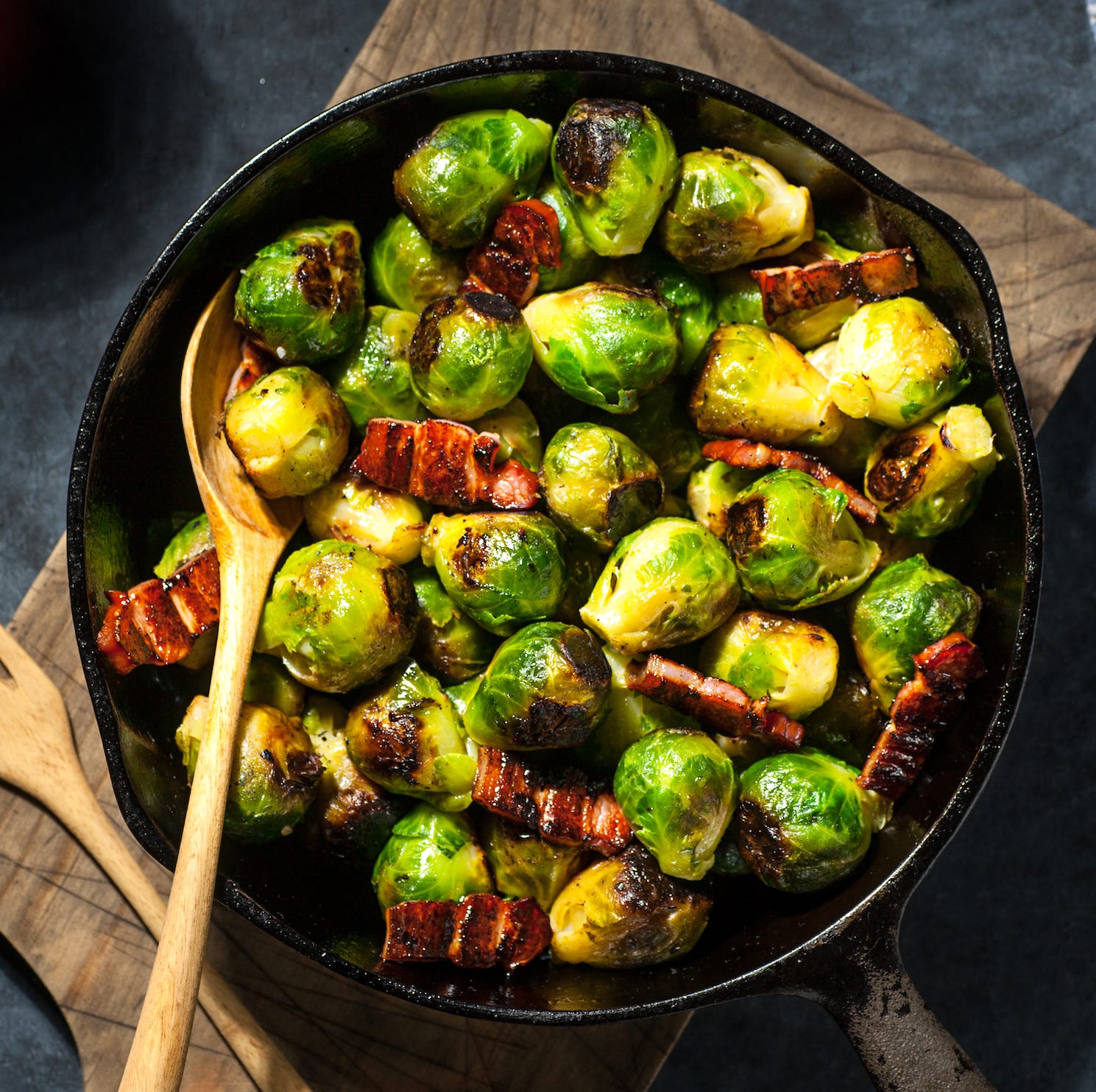 Zimmerman recommends roasting your chestnuts ahead of time to cut down on prep, and cooking your bacon first so that you can caramelize the Brussels sprouts in rendered bacon fat – which he said should never be wasted.

“Cut the Brussels sprouts in half first and put the cut side down,” Zimmerman said. “It will be in direct contact with the pan and you’ll get a really good caramelization.”

Toss your sprouts with the bacon and chestnuts, then throw them in a preheated oven set at 400 degrees Fahrenheit for 12 to 15 minutes.

“Put them in the oven and don’t move them around for a while,” Zimmerman said. “The more you move them, the less caramelization you’re gonna get.”

What better way to soak up everything on your plate than with some fluffy cornbread? 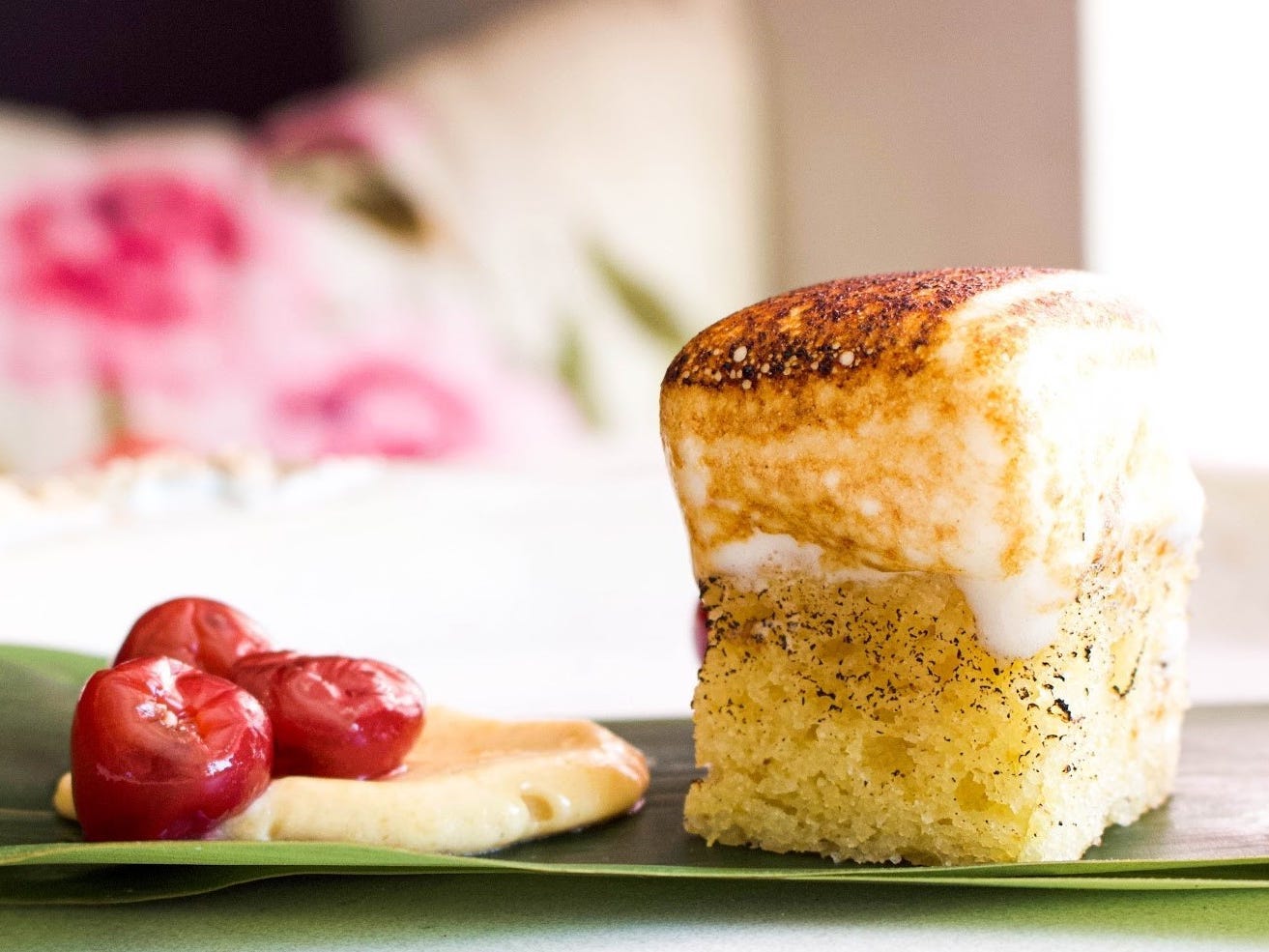 Mari Katsumura, the executive chef and pastry chef at Yūgen in Chicago, told Insider that her cornbread recipe is “foolproof and takes minutes to assemble.”

“It would be great as is, or as the bread for your stuffing,” she added.

First melt 1 ½ cups of butter on the stove, making sure not to boil it. Once it has cooled to room temperature, whisk the butter with 2 cups of granulated sugar in a bowl. Then, as you whisk, add six eggs to the mixture one at a time until everything has combined.

Then add all your dry ingredients to the bowl – 1 teaspoon of baking soda, 1 ⅔ cups of cornmeal, 3 cups of all-purpose flour, 1 ½ teaspoons of salt – and whisk until the mixture is halfway combined.

“Then add 2 ¾ cups of buttermilk and finish whisking just until it’s emulsified,” Katsumura advised. “Do not overmix.”

Katsumura recommends pouring your batter into a two-inch hotel pan. Bake it at 350 degrees Fahrenheit for 15 to 20 minutes, or until it’s golden brown and set in the centre.

“Rotate your pan halfway through cooking to ensure even baking,” she added. “And lower the temperature to 325 degrees Fahrenheit towards the end of the cooking time if the top browns aggressively before the middle is set.”

Or surprise everyone with some corn pudding instead. 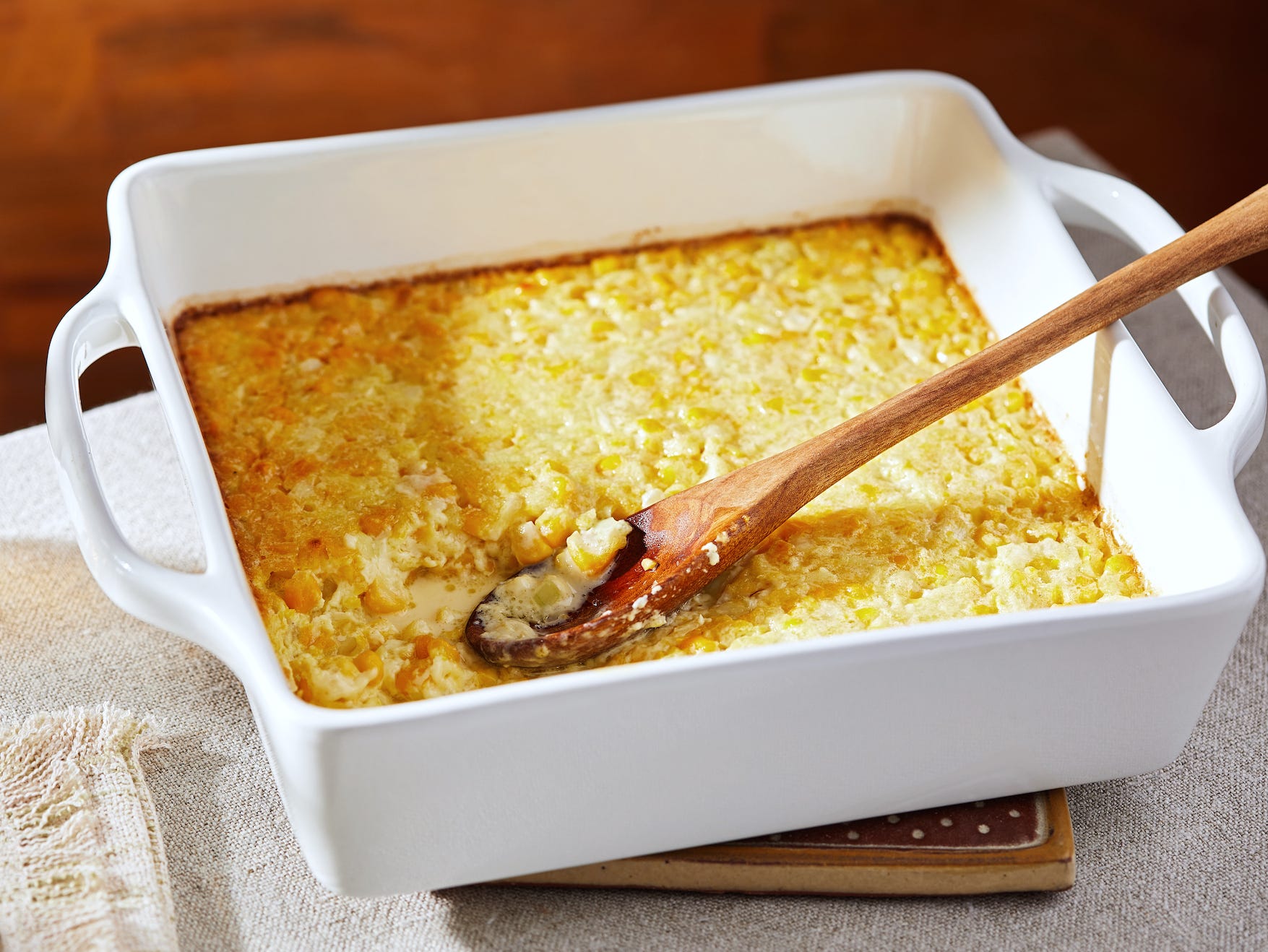 The Washington Post/Contributor/Getty ImagesChef Beverly Kim uses vanilla yogurt in her corn pudding to give it some extra sweetness.

Beverly Kim, who runs Parachute in Chicago with her husband Johnny Clark, told Insider that she learned this dish from a furloughed employee, who had to move back to Italy due to the ongoing pandemic’s effect on the restaurant industry.

The recipe – which was shared at Parachute’s annual staff Thanksgiving potluck before the pandemic began – is near and dear to Kim’s heart.

“I feel like everyone loves corn,” she said. “Not everyone loves mashed potatoes or stuffing, but this is a crowd pleaser. And it’s one of those things you can reheat, which is great. And it just goes well with everything on the Thanksgiving table.”

First preheat your oven to 350 degrees Fahrenheit. Melt one stick of butter in an 8-inch by 8-inch baking dish, making sure to coat the sides.

Then mix one egg with 8 ounces of vanilla yogurt in a bowl. You can also use plain yogurt or sour cream if you’d prefer your corn pudding to be less sweet.

Add your melted butter, one can of creamed corn, and one can of whole kernel corn (that you’ve already drained), and mix everything together. Then add one box of corn muffin mix (Kim recommends Jiffy) and stir.

Once everything is combined, pour the mix into your pan and bake it for one hour until your pudding is set.

Not everything about Thanksgiving needs to be traditional, especially when there’s pasta on the table. 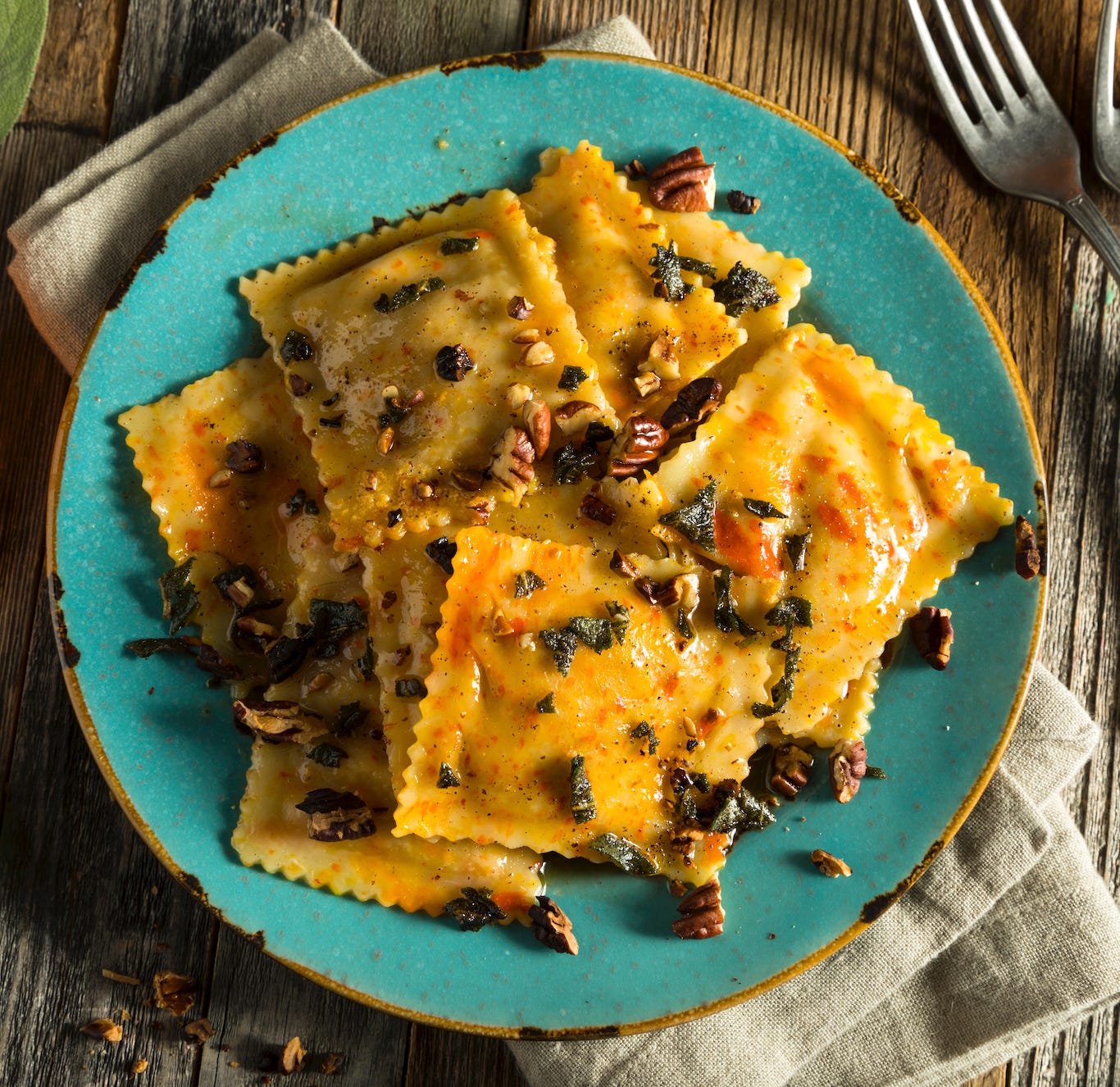 Ravioli was always at Thanksgiving dinner when “Top Chef” winner Joe Flamm was growing up.

“That’s by far my favourite Thanksgiving side dish,” Flamm, who was most recently the executive chef at Spiaggia in Chicago, told Insider. “What’s a better side dish than pasta?”

In holidays past, Flamm and his family would make about 600 raviolis for Thanksgiving.

“My mum’s one of nine and I’m one of 24 grandchildren, so we’d have an absolute crew,” he said. “We’d set it up at my grandma’s house and make a bunch of pasta dough. I’ve been doing it since I was a kid. If you can reach the roller, you’re part of the process.”

Flamm and his family won’t be able to do their usual big Thanksgiving feast this year, but he still plans to make ravioli for his much smaller dinner.

“I’m still gonna make them for my house,” Flamm said. “Come hell or high water, there will be ravioli.”

Michelin-star chefs share easy recipes you can make at home, from one-pot dinners to 30-minute meals