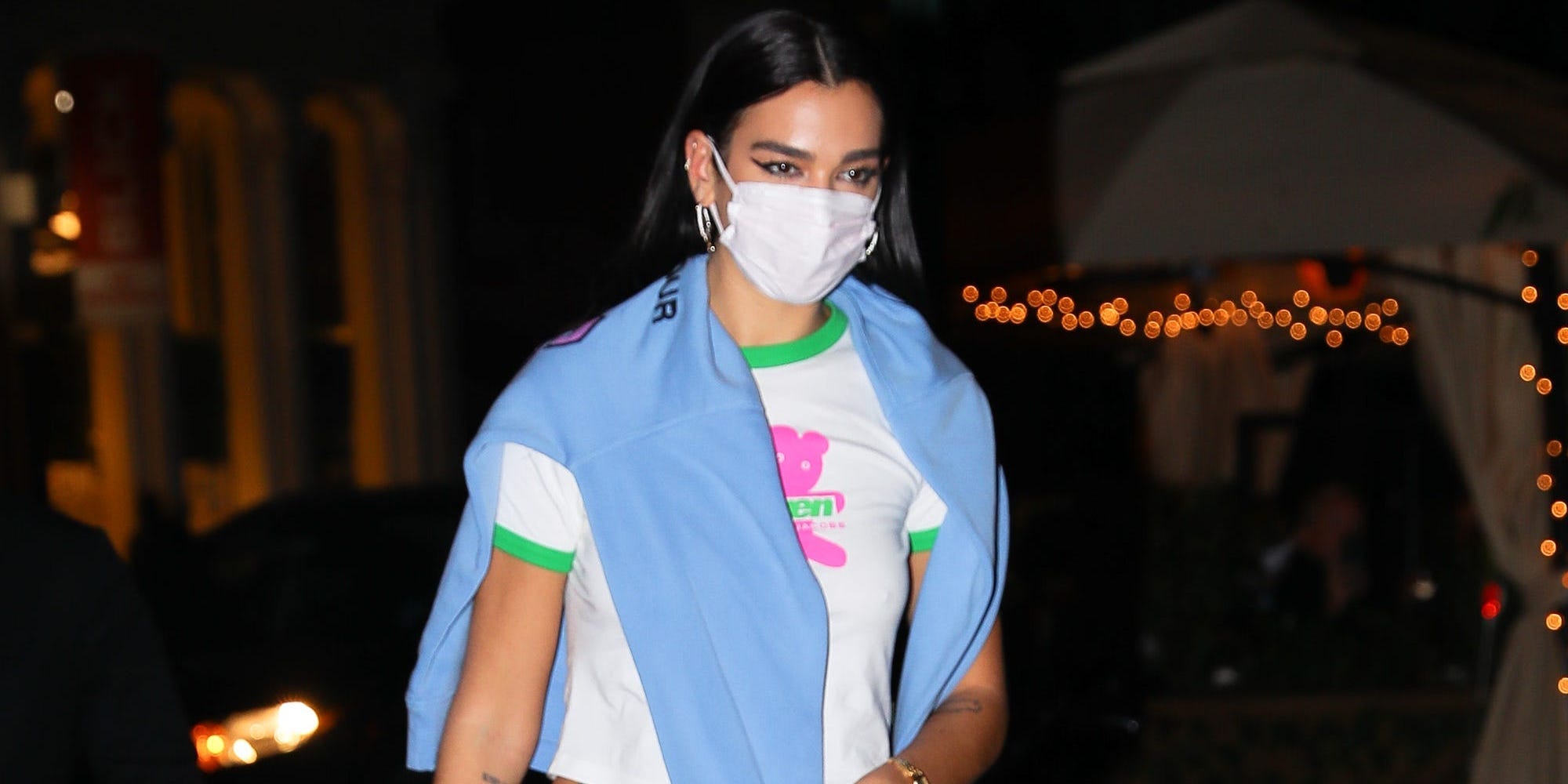 Splash PhotoDua Lipa and other celebrities have been embracing the exposed thong trend.

Dua Lipa was spotted embracing one of the hottest trends of the 2000s: the exposed thong.

Lipa was pictured while out in New York City on September 30 wearing baggy blue jeans that sat low on her hips, which revealed a black thong she had on underneath.

The “Break My Heart” singer was also sporting a white and green Marc Jacobs T-shirt with a pink bear printed on it. The shirt retails for $US65 at the time of writing and is still available for purchase on Marc Jacobs’ website. 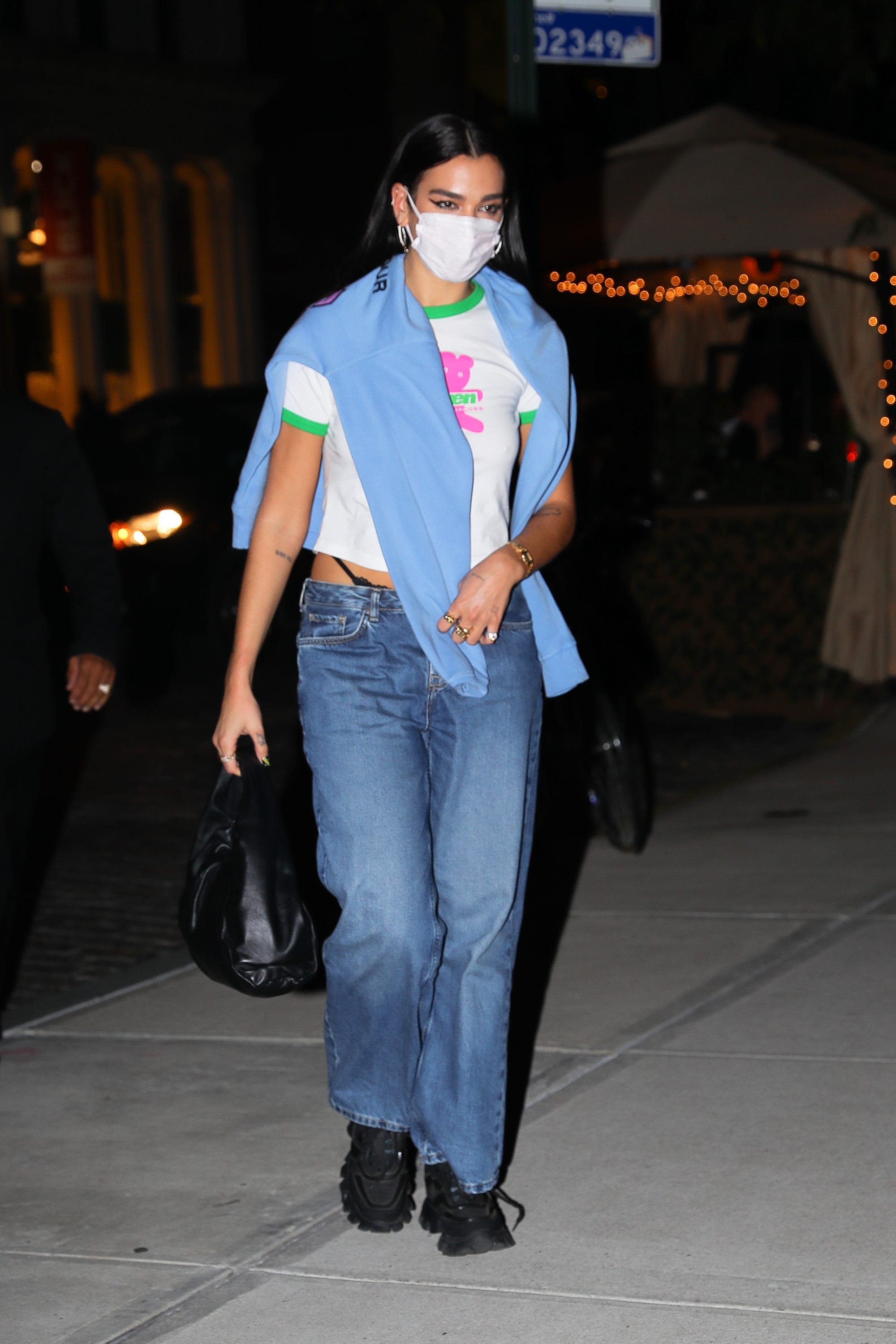 Splash PhotoLipa’s thong poked out below her white T-shirt.

Lipa added to her look with a white mask, a black handbag, and a cornflower blue sweatshirt over her shoulders.

The singer topped off her look with chunky black sneakers, another trend from the 2000s that has seen a resurgence since fashion houses Louis Vuitton and Balenciaga made shoes in the style in 2017, according to Vogue.

Lipa isn’t the first celebrity to try out the exposed thong trend, which first appeared back in style on runways in 2017,Vogue reported.

In 2019, Bella Hadid was pictured with an exposed thong when she walked the Versace Men’s Spring 2020 fashion show. 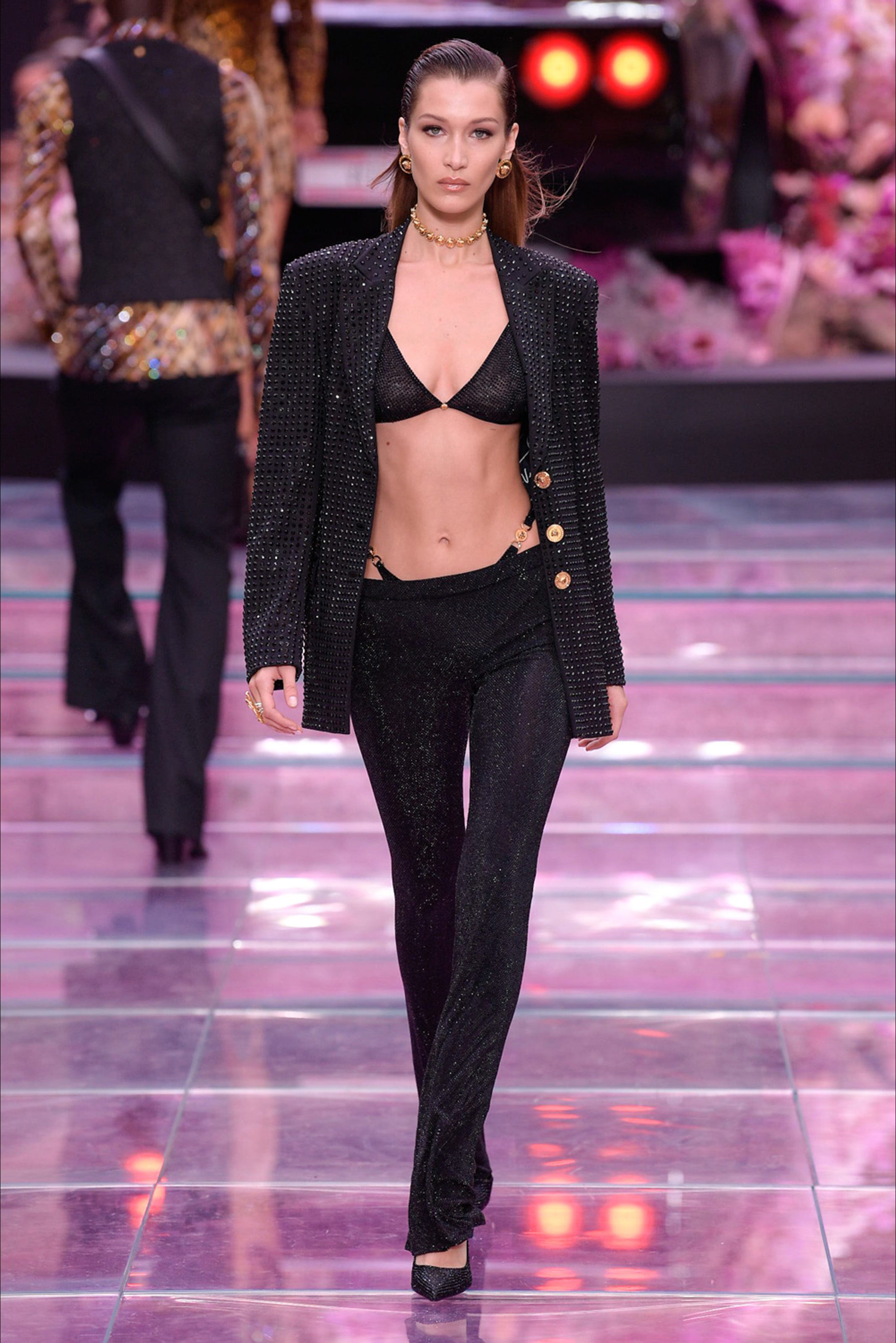 Hadid’s sparkly low-rise black pants revealed a black thong with gold Medusa medallions on each side.

At the 2019 Met Gala, Hailey Bieber wore a bubblegum pink Alexander Wang dress that had an exposed thong feature. 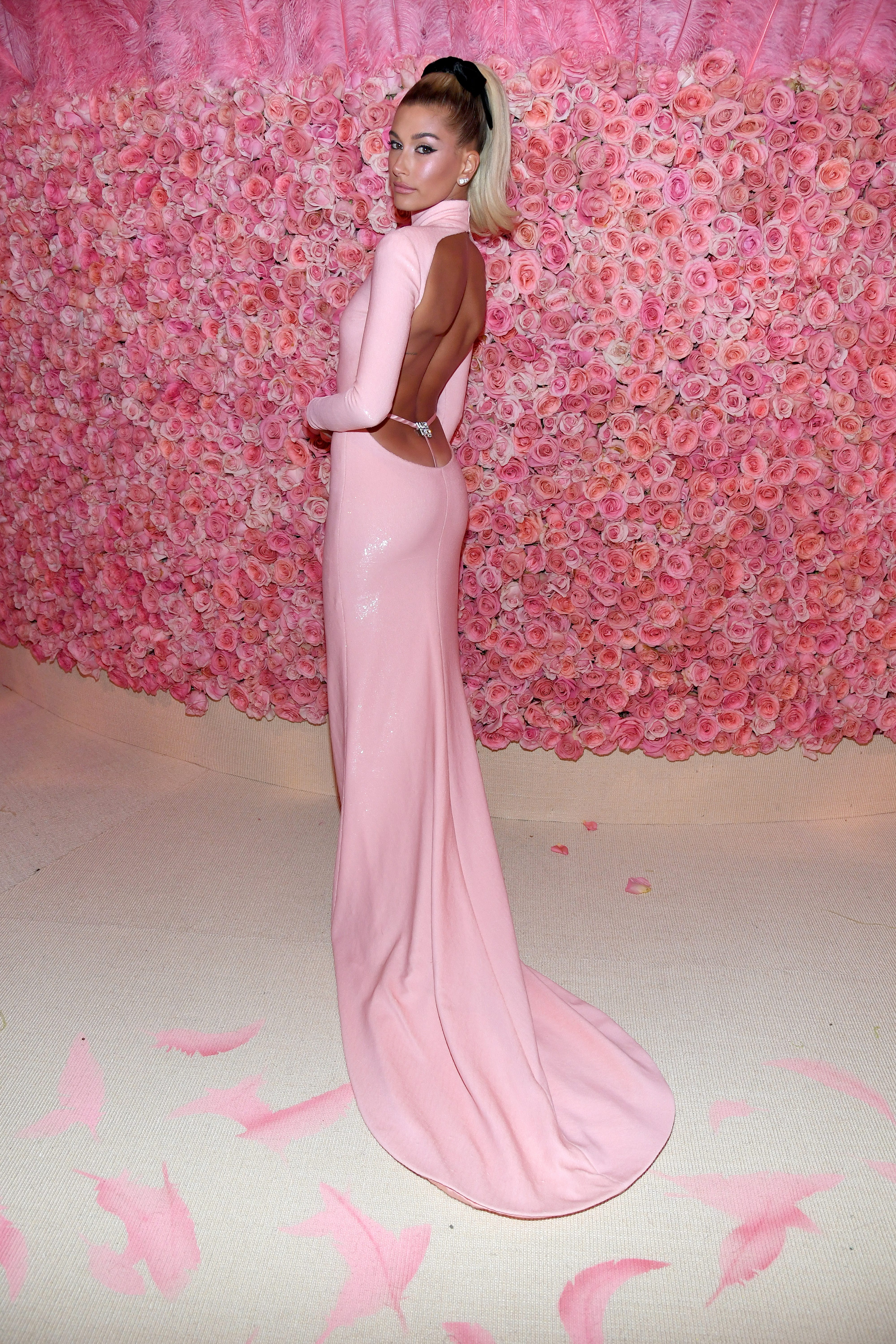 Kevin Mazur/Getty ImagesHailey Bieber’s dress appeared as if it had an exposed thong.

In February, Kendall Jenner was pictured in a head-to-toe I.AM.GIA pink outfit that was designed to appear as if it had an exposed thong. 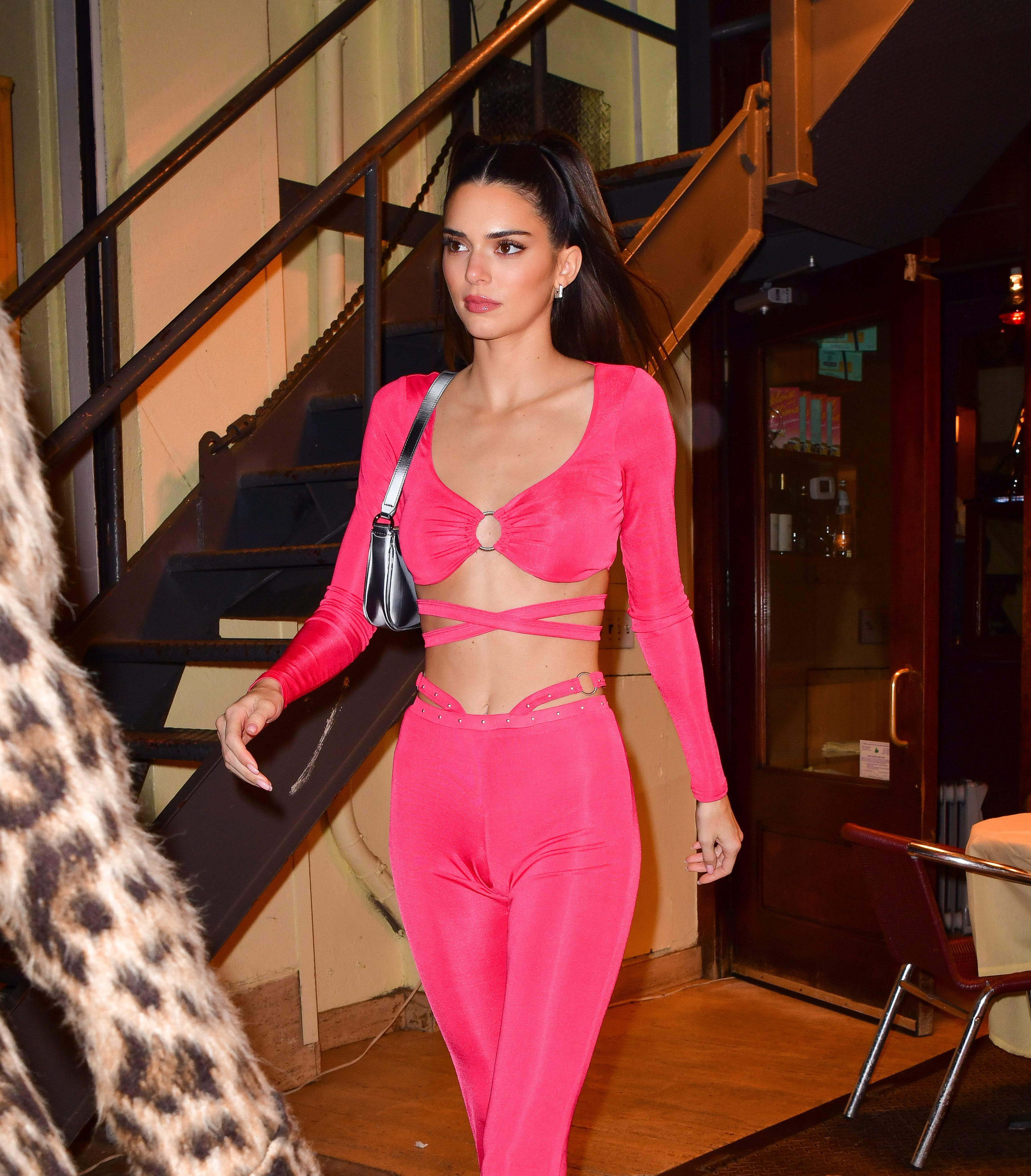 Exposed thongs are one of a number of 2000s trends that have seen a resurgence in recent years.

Tube tops started appearing on retail shelves again in 2018 after a number of celebrities were pictured wearing the trend. In 2019, Steve Madden brought back its classic black chunky slide sandals that were popular in the ’90s and early 2000s.

Representatives for Dua Lipa did not immediately respond to Insider’s request for comment.