Drake Bell began working on television years before “Drake and Josh.”
Drake Bell entered the Hollywood scene in 1994 at 7 years old when he appeared on an episode of ABC’s “Home Improvement.”

The actor started gaining more attention on Nickelodeon’s “The Amanda Show” from 1999 to 2002. Two years later, the network gave him a starring role on “Drake and Josh” as Drake Parker.

While filming “Drake and Josh,” Bell starred alongside costar Miranda Cosgrove in “Yours, Mine, and Ours” (2005).

Like his character on “Drake and Josh,” Bell is also a musician. He released his first two albums, “Telegraph” and “It’s Only Time,” while filming the show.

Bell also reprised his role as Drake Parker in the TV movie “Merry Christmas, Drake and Josh” (2008). His most recent film credit was voicing Oscar the Rabbit in “The Big Trip” (2019).

He returned to Nickelodeon to appear as Timmy Turner in a number of spin-off movies based on an animated series, including “A Fairly Odd Movie: Grow Up, Timmy Turner!”(2011) and “A Fairly Odd Christmas” (2012).

Bell continued his music career, releasing his third album “Ready Set Go!” in 2014. In 2020, he released “The Lost Album,” which included songs from a missing hard drive that were originally supposed to be a follow-up to his 2006 album “It’s Only Time.”

In June, Bell pleaded guilty to felony attempted child endangerment and a misdemeanor charge of disseminating matter harmful to juveniles, according to the Associated Press.

In July, he was sentenced to two years of probation on child-endangerment charges.

Josh Peck started his acting career with movies such as “Snow Day” and “The Newcomers.”
Josh Peck also began acting at a young age, with his first role in the 2000 movie “Snow Day” at age 13. He went on to star in Disney’s “Max Keeble’s Big Move” a year later.

Peck was a regular performer alongside Bell on Nickelodeon’s “The Amanda Show” from 2000 to 2002 before he snagged the lead role of Josh Nichols on “Drake and Josh.”

Peck has continued his career on TV and in films, and has made a name for himself online.
Some of Peck’s film work after “Drake and Josh” includes “The Wackness” (2008), “Drillbit Taylor” (2008), and the TV movie “Merry Christmas, Drake and Josh” (2008). He was also the voice of Eddie in the “Ice Age” film series.

On TV, Peck had a recurring role on Fox’s “The Mindy Project” and voiced a character on Nickelodeon’s “Teenage Mutant Ninja Turtles.” He also starred alongside John Stamos on Fox’s “Grandfathered” from 2015 to 2016.

He recently starred as Scott Turner on the Disney+ TV adaptation of “Turner and Hooch.” He’s also set to star on the upcoming Hulu series “How I Met Your Father.”

Outside of film and TV, Peck has made a name for himself online. He was popular on Vine before the platform officially shut down in 2017, and he’s a successful YouTuber.

Miranda Cosgrove was one of the biggest stars to come out of “Drake and Josh.”
Miranda Cosgrove started her career on an episode of The CW’s “Smallville” in 2001 at just 8 years old.

Soon after, she landed the role of Megan Parker, Drake and Josh’s annoying younger sister, on “Drake and Josh.”

While filming the show, Cosgrove starred alongside Bell in “Yours, Mine, and Ours” (2005).

She also launched her music career on “iCarly,” releasing a soundtrack album that included the show’s theme song “Leave It All to Me.” In 2010, she released her first studio album “Sparks Fly.”

After “iCarly” ended, Cosgrove took a break from acting to get her college degree from the University of Southern California.

Cosgrove recently starred on the “iCarly” revival series on Paramount+.

He also appeared on TV shows such as The WB’s “Buffy the Vampire Slayer,” Nickelodeon’s “Blue’s Clues,” and CBS’ “The Handler.”

Goldstein snagged the role of Walter Nichols, Josh’s dad, in 2004.

More recently, Goldstein had a recurring role on CBS’ “Suspense.”

Alongside Bell and Peck, Sullivan was on “The Amanda Show” before landing the role of Audrey Parker-Nichols, Drake’s mom, on “Drake and Josh.”

Sullivan has added a few more TV and film credits to her filmography since the show ended.
Toward the end of “Drake and Josh,” Sullivan started voicing Lucille Johnson on Cartoon Network’s “Squirrel Boy.”

Brown still has a successful career on TV and in films.
After “Drake and Josh,” Brown had roles on shows like NBC’s “Community,” CBS’ “The Odd Couple,” and ABC’s “The Mayor.”

She also voiced Luna on Disney’s “Elena of Avalor,” and more recently, she worked on Disney Plus’ “Big Shot” and Disney Junior’s “Chicken Squad.”

The actress is set to appear in the upcoming “Enchanted” sequel, “Disenchanted.”

Jerry Trainor had several acting roles before playing Crazy Steve on “Drake and Josh.”
Jerry Trainor began his professional acting career in 2000 when he played Eric on MTV’s “Undressed.” He followed that role with appearances in “Donnie Darko” (2001) and “Evolution (2001).

Trainor was acting on NBC’s “Crossing Jordan” when he started playing Crazy Steve on “Drake and Josh.”

He also voiced a character on the network’s animated series “T.U.F.F. Puppy” and starred on Nickelodeon’s “Wendell and Vinnie” in 2013.

His other TV credits include CMT’s “Still the King” and Netflix’s “No Good Nick.”

The actor also returned for the “iCarly” revival.

She also appeared on shows like Fox’s “Grounded for Life” before landing the role of Mindy Crenshaw on “Drake and Josh.”

While Scagliotti was on “Drake and Josh,” she also had notable roles on Nickelodeon’s “Zoey 101” and The CW’s “One Tree Hill.”

Her latest credit on IMDb was an episode of the digital series “Take One Thing Off” in 2018. 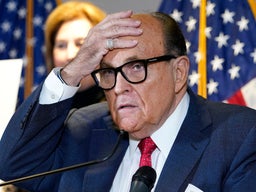