Let’s face it: “Minecraft,” despite being the biggest game in the world, is pretty daunting for some people. It plops you down into this gigantic, blocky world, with a near-unlimited amount of things to do and precious little direction for players who want a more guided experience.

Enter “Dragon Quest Builders,” a brand new PS4 game spun off from the long-running, enormously popular “Dragon Quest” series of Japanese role-playing games. It takes familiar tropes from classic RPGs like questing and narrative and implants them into an impressive-looking “Minecraft” derivative.

Here’s how it all works:

In 'Dragon Quest Builders,' you are a plucky hero with the ability to save the world. Specifically, dark forces hilariously robbed everyone in the world of the ability to create things, except for you. It's time to rebuild the world from the ground up. 'Dragon Quest,' by the way, is a cultural force in Japan. The characters for each game are designed by 'Dragon Ball' creator Akira Toyoyama, for example. It's not as big in the west, but in Japan, it's beloved. Anyway, don't let the cutesy anime art style of 'Dragon Quest Builders' fool you -- this game is 'Minecraft' through and through. That blocky world below is yours to mine and shape as you see fit. This game may look like an old-school RPG, but it's all about banging on blocks until they produce materials. You will then use those materials to build structures, craft weapons and more. A major difference is that this is a game about rebuilding the world after a catastrophe. That means you'll manage a town filled with people who will give you quests to complete, so you'll always have something guiding you forward throughout the story. Because it's based on a series of RPGs, 'Dragon Quest Builders' has more of an emphasis on combat than something like 'Minecraft' might. Iconic monsters from the series, such as the blue Slimes and the huge stone Golems, will attempt to stop you in your quest to rebuild civilisation. There will also be huge bosses to fight, as you might expect. Unfortunately, you'll have to fight them all on your own -- 'Dragon Quest Builders' has no multiplayer features. But if you want the crafting and building of 'Minecraft' with the direction and story of 'Dragon Quest' or classic 'Final Fantasy,' this game might just do the trick. To see how the game works, watch this trailer that breaks it all down: 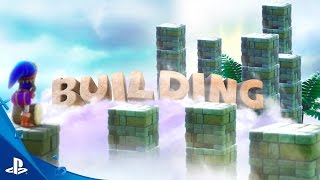